When I wrote about the boat ride to Elephanta caves, I didn’t know it would take this long to actually get down from the boat and enter the caves. :P
Ah well, I have been traveling for most of the last one month and hence the absence. But I believe in ‘better late than never’. So, here I am once again. Once you step onto the island, a mini train well adorned with fresh nimbu-mirchi to ward off any evil, welcomes you to take you to the main gate. Again, as we always prefer to try the options; we kept the mini train ride for coming back when we would be tired. So fresh and raring to go, we chose to walk to the gate, clicking some pictures on the way. 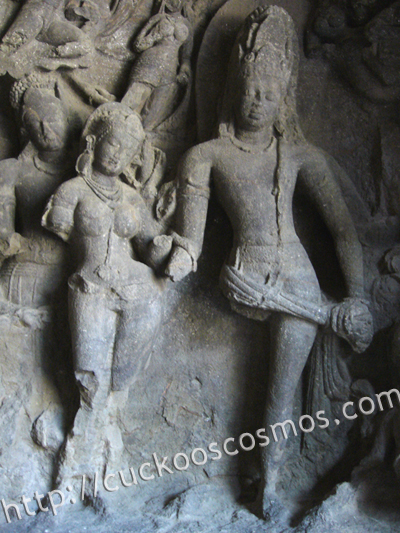 After crossing the main entrance gate, the fifteen minute trek to the first cave is the noisiest part of the whole trip as the stretch is full of tourists, small-shop owners and monkeys. Shops along the steep flight of sharp stone steps await and tempt you to stop and the foreigners are lured to hire the wooden chairs (paalki) to be carried up.
You’ll find 2-3 eating joints/ small restaurants (not very good ones) on reaching the top steps. This is the only place where you can get bottled water and cooked food though, later, you will find nimbupani wallahs at every turn of the climb.
However noisy it maybe, I am sure that centuries ago, the Shiva cult that inspired this temple complex demanded silence and solemnity – a place of worship in the middle of this vast ocean. 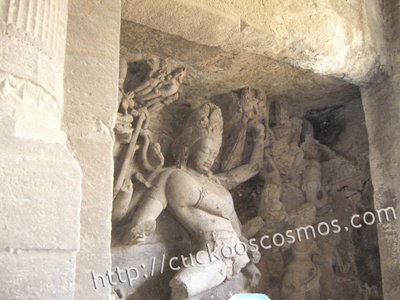 The island of Elephanta, originally known as Gharapuri, derives its name from a massive stone elephant which now being displayed in the Victoria Gardens in Mumbai.
The island rises in two conical hillocks. Today the caves can be easily approached, but think of the time when the artisans used only the contours of the hill to reach the top and then chiseled out the basalt rocks to give it the shape of heavenly abode of Shiva. The Monasteries of Ajanta lead us directly to Elephanta. It appears that the same families of craftsmen and sculptors who were working on the Kailasa temple of Ellora and adjoining Buddhist caves at Ellora were employed at Elephanta.
There are three caves out of which, one is dedicated to Shiva made out of solid basalt rock. The main cave comprises of a pillared hall in which a small shrine with four entrance doors flanked by Dwaarapals (Watchmen) is situated. Legends and history suggest that the great warrior prince of Chalukya dynasty Pulkesin II raised the shrine to celebrate his victory. 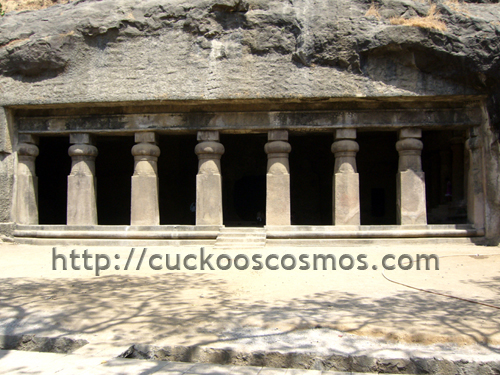 Slowly, once the eyes become accustomed to the dim light within the cave; one can make out marvelous representations from Indian mythology carved on the walls. Here Lord Shiva can be seen in different moods. The nine sculptured panels depict Shiva as Samharamurti (destroyer of evil and ignorance). The figure of Mahesamurti (as Shiva is called when all the three aspects of creation, protection, and destruction are combined), in the central panel of the back wall is a masterpiece of Chalukya-Gupta art.
His calm face in the centre represents the protector, while his left ferocious face depicts Bhairava (responsible for destruction), and the one on the right having a gentle feminine look depicts Vamadeva (responsible for creation). 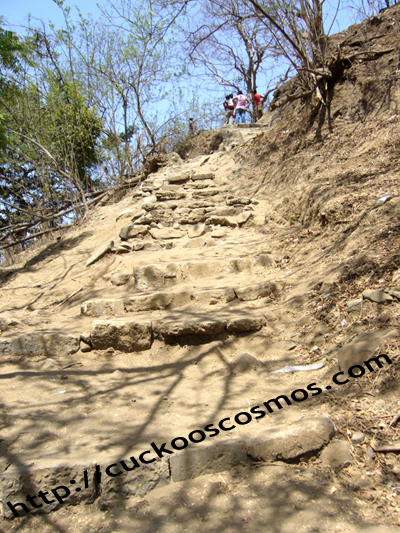 It is believed that the caves were used as target practice after they constructed a fort and put a flag to ward off pirates. Whatever the cause may be, many of the sculptures have been desecrated. From the Portuguese, the Britons captured the island.

Many people return back after seeing the first cave. Make up your mind before climbing up for other spots as it needs one to be physically fit to go further. Oh what about those Paalkis which I talked about earlier ?? Well, those wooden chairs will leave you just at the entrance of first cave @Rs100/- per head. After that you are on your own. Also, don’t forget to carry your own water. You’ll need plenty of it.
Canon Hill
As I said earlier, the island consists of two hillocks. Your trip to Elephanta Island would be incomplete without a small climb up to Cannon Hill – aptly named because of the cannons strategically perched on top of the hill.
The climb is quite risky at times with slippery mud steps (sometimes even those are missing) and hill on one side and sea on the other. To top it, monkeys are ever ready to get the hell out of you. I slipped off 4-5 times in spite of donning proper shoes (No, monkeys were not the reason for it).
The cannons are cleverly camouflaged by the surrounding greenery and they must have probably been a very effective weapon in keeping out attackers. 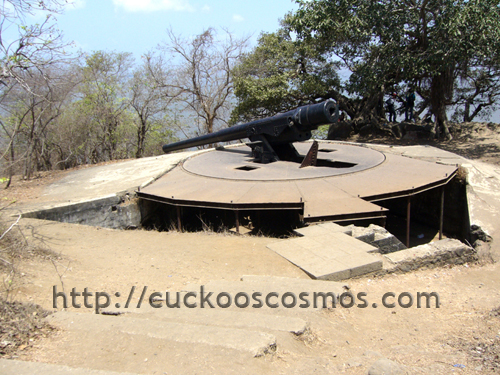 One of the cannons in all its glory. The dais can actually turn a full circle thereby giving a 360° field of attack.
There’s a staircase from the sturdy base of the cannon leading downstairs and into a maze of rooms probably meant for storing shells for the cannon and other artillery. Passageways cut into the hill were probably used as escape routes.
While coming back we took the mini train, took the ferry & headed towards Gateway of India. It is a full one day trip if you are interested in seeing all.

The Elephanta Caves was last modified: July 7th, 2019 by Cuckoo

Earlier, the Siddhivinayak temple was a small construction highlighting the black idol of Shree Siddhivinayak, carved out of stone. It was only two and half feet wide then. The most remarkable feature of this idol of Lord Ganesh is that, His trunk is tilted to the right side. The deity has four hands, which is why it is also called Chaturbhuj.