It was the 2nd night of February 2009. The nip in Delhi’s air was evident. It was almost midnight when we reached the Indira Gandhi International airport. The temperature in Delhi was about 6 degrees and the team members had jackets and sweaters on, with dry and cold hands enjoying steaming coffee at the airport. I was trying to imagine how it would be like, after seven or eight hours when we land at Zurich airport with a predicted temperature of –4o C. 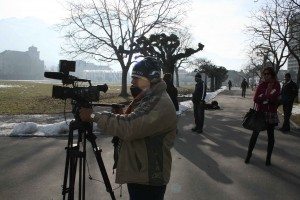 Going for a TV shoot to Switzerland in winters was sheer madness. No swiss cows, no trademark green landscapes, chilling brutal wind and snow white ambience – what are we up against, I wondered.

When the boarding announcement got me back to the airport – as we got onto the Swiss Air flight from Delhi to Zurich. The best part about my flight were the business class tickets – in this recessive markets where everyone seem to be cutting costs – business class surely made us feel special –all courtesy Swiss Tourism.

With a team of five members that included a TV anchor, a camerman, my co producer and a representative from Swiss Tourism, India – the trip promised to be an exciting one albeit the harsh cold season.

We seem to be the only ones in the area barring an elderly couple who anyways preferred to sleep through most of the journey. We decided not to order any beers or whisky but instead sip some Swiss wine to set the mood. The wine and food was really nice and soon we dozed off to sleep.

I got up with the seat belt fastening announcement that said that indicated we were about to land in Zurich. Quickly we got ready to get off.

After landing at Zurich we were transferred through a tunnel to the building. Here we were expected to cross over buildings, take a train to the main terminal and then board the Swiss rail for our journey onwards – all in the comfort of centrally heated indoors.

Our only interaction with the Swiss chill was while crossing from one building to another. And let me tell you this was enough to wake me up.

The railway station is situated just below the airport. After waiting for sometime, we boarded the train to Berne, the beautiful capital city of Switzerland. The train was a double Decker and we got a seat on the upper floor.

Soon came the train catering staff and we all ordered cups of steaming cappuccino –stare out of the window in complete silence as if trying to absorb every single view of this white countryside which has for ages been a dream holiday for every Indian.

At about nine in the morning, we reached Berne – a crowded station as per Swiss standards. We had to changed platforms for our next train which would take us to our destination – Interlaken.

It took an hour’s time to reach Interlaken, small town used frequently by Bollywood movies. Remember the station where SRK & Kajol missed their Euro Rail in DDLJ, the place they walked around, shot a song – these were all here at Interlaken.

The highlight of this small town is its proximity to the Alps. The towering mountains in the background, snow-white grounds and a quiet pristine setting – I fell in love with Interlaken at first glance.

At the station we were greeted by officials of Interlaken Tourism whose warm smiles made up for the chilling temperature. We decided to meet for lunch at 1 pm so that means we had about 3 hours of time to get ready.

We had a reservation at Hotel Interlaken on the famous Hoheweg Street. Hotel Interlaken is one of the oldest establishments in the area. The first traveler stayed here almost 600 years ago and I was really happy to be part of such amazing history.

The rooms were neat and cozy. The temperature set at a comfortable 20oC considering the outside temperature was minus 5oC.  It was about 11 am so I still had some time for a short nap. After some rest I got ready for my lunch at Restaurant des Alpes – a nice restaurant facing the snow-covered grounds of Interlaken.

Food here was a combination of Salad, soup, wine and pasta. I chose to opt for red wine and chicken with penne. The highlight of the lunch was the Cheese – rich aroma and texture teamed with the House Red Swiss just made my day.

After lunch it was time to meet our guide for the day – Susan Huber, a middle aged lady of British origin. She explained us the meaning of Interlaken – Between two lakes. The town got its name from its location between lake Thunz and Brienz. She also narrated a brief history of the place.

While we walked and talked, we arrived at a terrace café – Top o‘Met. The café commands a stunning 360o view of Interlaken and the snow capped peaks of Eiger, Mönch and Jungfrau amongst others. Sipping a coffee while watching the panorama was something I will cherish for the rest of my life.

Our guide Susan got a call and soon we went down to find two magnificent horse carriages waiting outside the hotel. The carriages were in good shape complete with pillow and blanket while the mountain horses although shorter than regular ones seem quite sturdy.

As the carriage trotted the streets, I could recognize several locations I had watched in bollywood films. We had a lot of work to do, as everything seemed good to shoot on our camera. We soon reached the old town of Unterseen. Incidentally Unterseen means the same as Interlaken – the only difference is the language – one is Latin while the other is German.

Soon we were back at the hotel, but had very little time since Swiss people generally had early dinners. Even before I could freshen up, the pick up car had arrived. I quickly put on another layer of clothing. And wisely so because the outside temperature had dipped further.

Our dinner was arranged at the Restaurant Laterne – a traditional Swiss dining. On our menu was the famous Rosti – a meat and potato dish laced with cheese. Also on the table was the national dish of Switzerland – Cheese Fondue where a pot of molten cheese is placed on your table along with bread cubes. You are expected to fork the bread and dip it into the cheese. This is a community dish had together from one pot. Apart from this, we had the regular affair like salad, soup, wine, pasta and dessert.

After a heavenly meal, I decided to walk my way back to the hotel. As I walked, I thought about my first day in Switzerland.  Apart from the natural beauty and charm, Switzerland had something unique. – A self-actualisation of following rules and regulation, doing everything with a systematic approach. Well it isn’t for no reason that they make the best watches in the world.

While I thought about all this, I was already in my room looking at my itinerary that said Jungfraujoch on the 3rd of February.

But that will be another day, another part of my Swiss odyssey. But you gotta wait for that.

The website best describes me. I am a ghumakkar. I need to go on a long drive every month. Spending over a month in Delhi makes me sick. I suffer from what scientists say is Compulsive Travelling Disorder. Nothing makes me more happy than being behind the wheels of my car on a highway. My profession also compliments my travel instincts as I produce a Travel Series. Apart from travelling, i love food. This is again my focus zone when I travel - trying new cuisine. On a general note, I am a complete fun freak

Miracle Happens! You just need to be at the right place. This all I can say after visiting this one of the most incredible…