28th Jan 2007: That was our last day in Shekhawati. We had very less time, as we wanted to reach Delhi before it was dark. Jaishree and Dhanshree were in a mood to return back from Nawalgarh so that we could relax a little before starting the daily chores of the next day. I insisted for “Dekko Mandawa” even if it meant “कबड्डी कबड्डी छू” (touch the place and return back). Anirudh supported the idea as he felt that he could drive fast to reach Delhi before 8:00 pm. Luckily we men are so bad in our estimations ;).

Mandawa is just 24 Km from Nawalgarh. Road connecting Mandawa and Nawalgarh passes by sparsely located hamlets, surrounded by yellow sand and “Khejri trees”. These small settlements are called “Dhani” in Rajasthani. The tar road was emerging from nowhere and was vanishing in the sand and it was in a very good condition. We passed the herds of grazing sheep and goats. 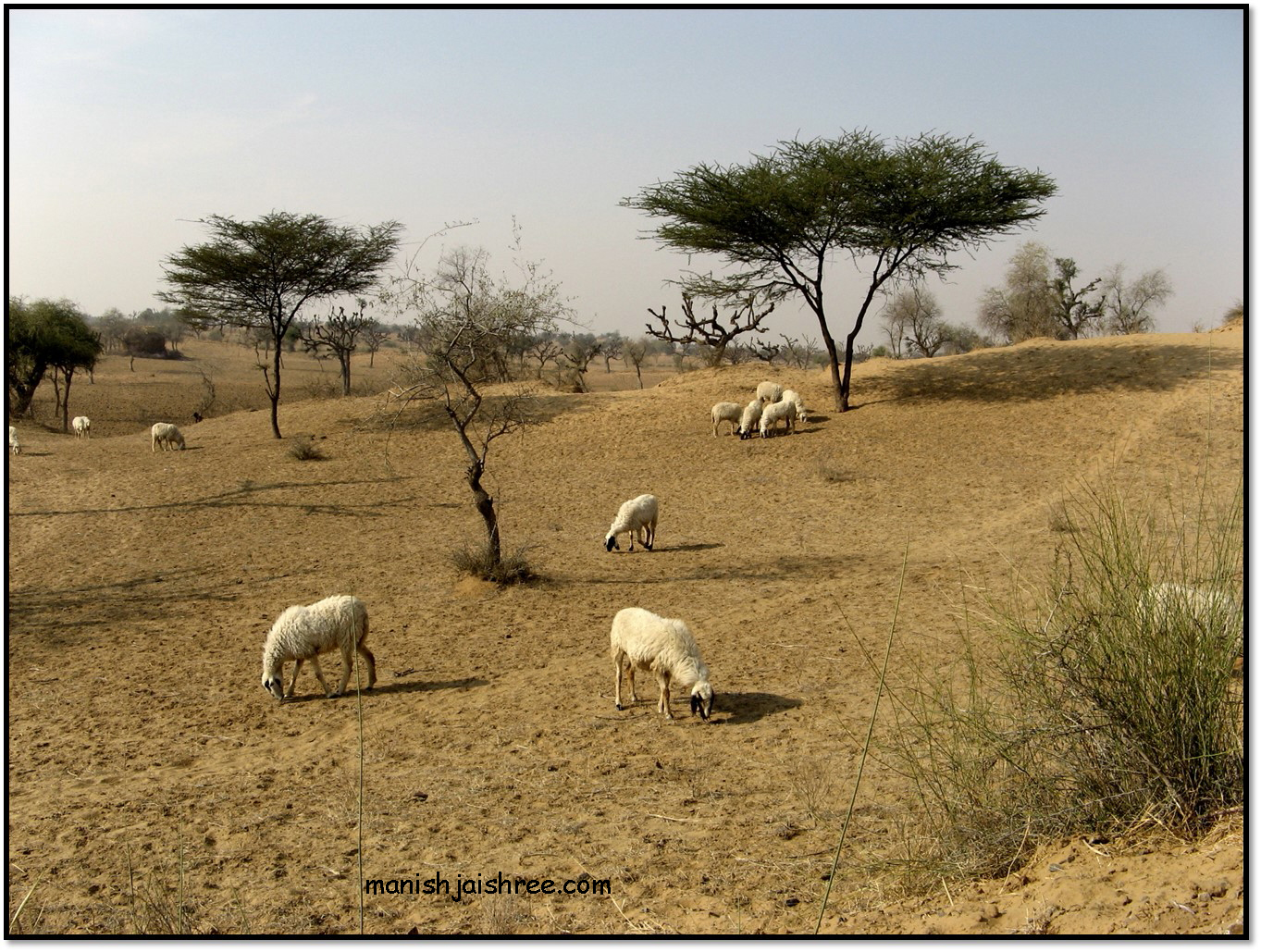 The land of Shekhawati

Mandawa: The first inhabitant of this place was a farmer, Mandu jat and initially it was known as ‘Mandu ki dhani’. Later on it changed from ‘Mandu ka bas’ or ‘Manduwas’ which changed to ‘Manduwa’, ‘Mandwa’ and finally ‘Mandawa’. This small, quiet town was settled in 18th Century and was later on fortified by its rulers and dominant merchant families.

When we were approaching Mandawa our heart swayed with the old world charm of this small town. The very first thing visible from distance was an old castle with a flag fluttering over it. The medieval fort of Mandawa appears to be rising gradually on the horizon like a mirage. After reaching Mandawa we drove to the castle. The castle was very impressive, a harmonious mix of old and new as modern comfort blended well with the old world setting. Family portraits, arms and antique canons added to its charm. 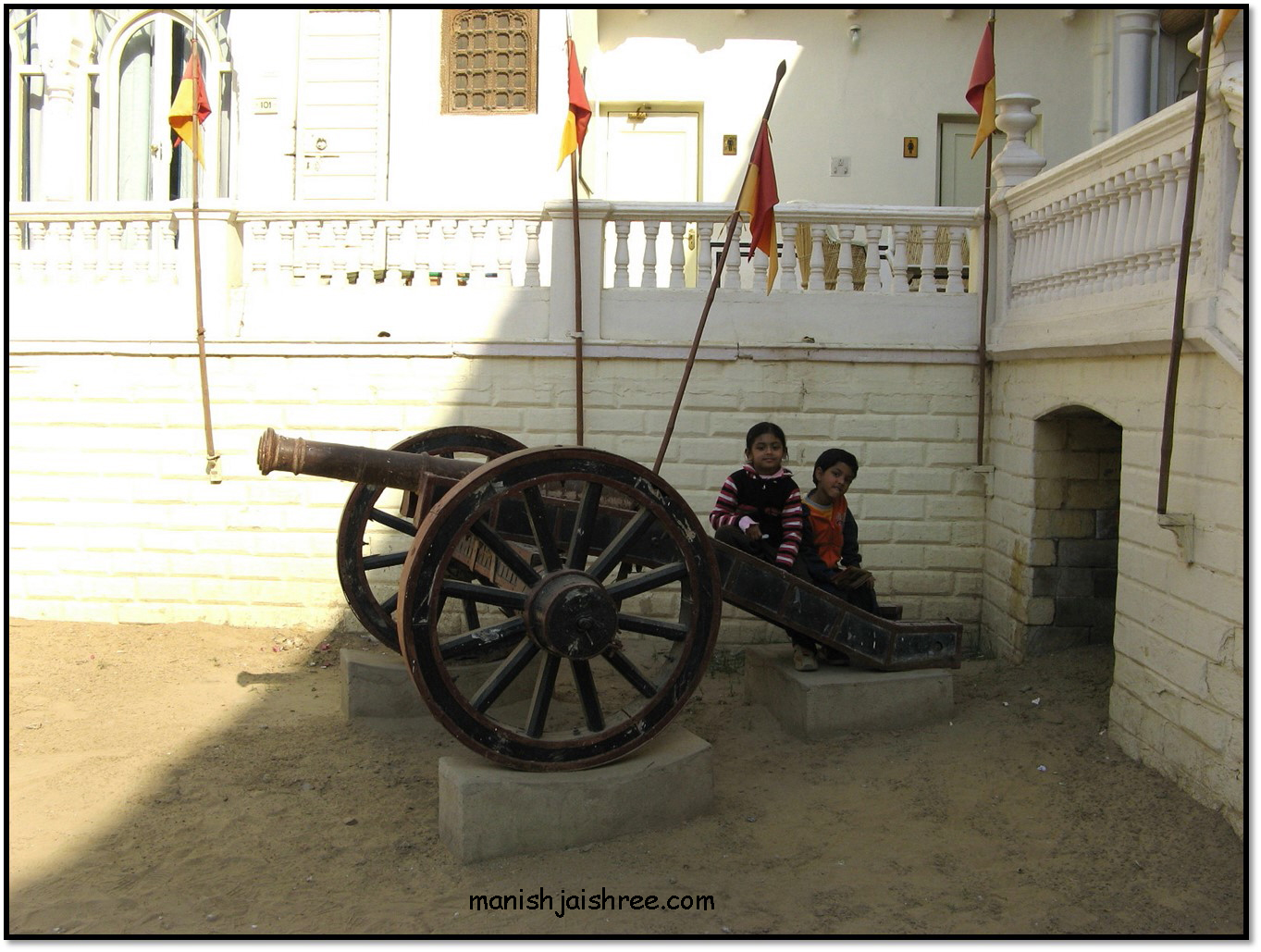 Rachit and Gargi started to play on the canon. This destructive machine must have been happier to receive such peace loving visitors on its other end. The castle had a very big compound. Castle Mandawa is largely responsible for promoting tourism in this region. I feel that the only way left to protect our castles is to convert them into hotels.

When they came to know that we had not gone there to stay, they told us that we could not park our car there. We went back and parked our car in the main market. After parking the car we started our favorite sport in the Shekhawati- Haveli hunting. Roaming in the town itself was very enjoyable, away from hustle and bustle of metros; life in these small towns is very relaxing. We could easily allow kids to walk without worrying about their safety, as there was no vehicle around. 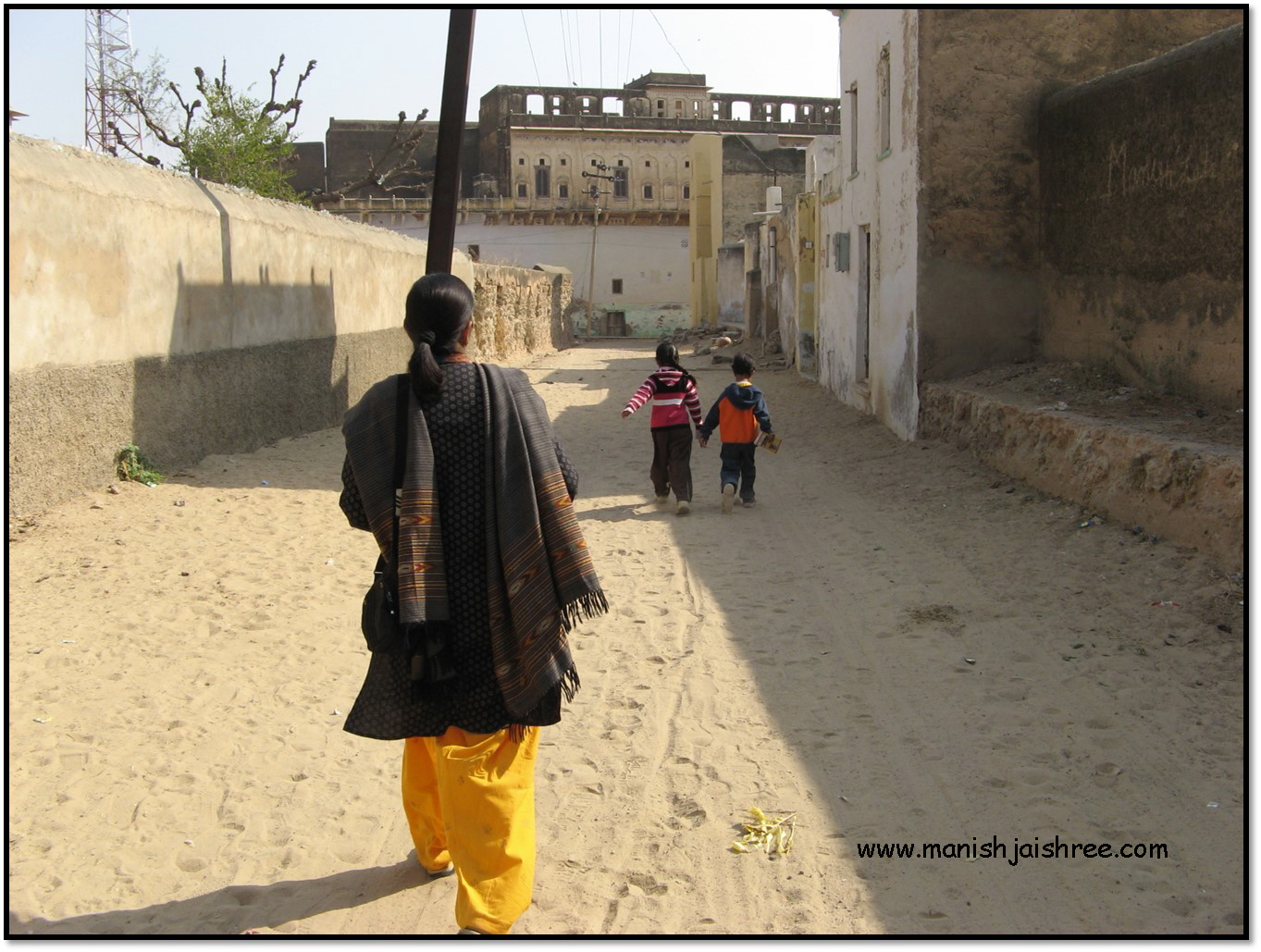 Gargi and Rachit walking hand in hand and leading the pack. They were walking happily, occasionally kicking the sand, and enjoying their freedom.

First Haveli we visited in Mandawa was “Chokhani Haveli”. It’s unique in the region for having twin wings. The Haveli was very symmetrical and if it were divided in two, one half would have overlapped the other. This Haveli had a fresco of “Sadhu with a chillam”. I found it funny to have such fresco painted on one’s house. 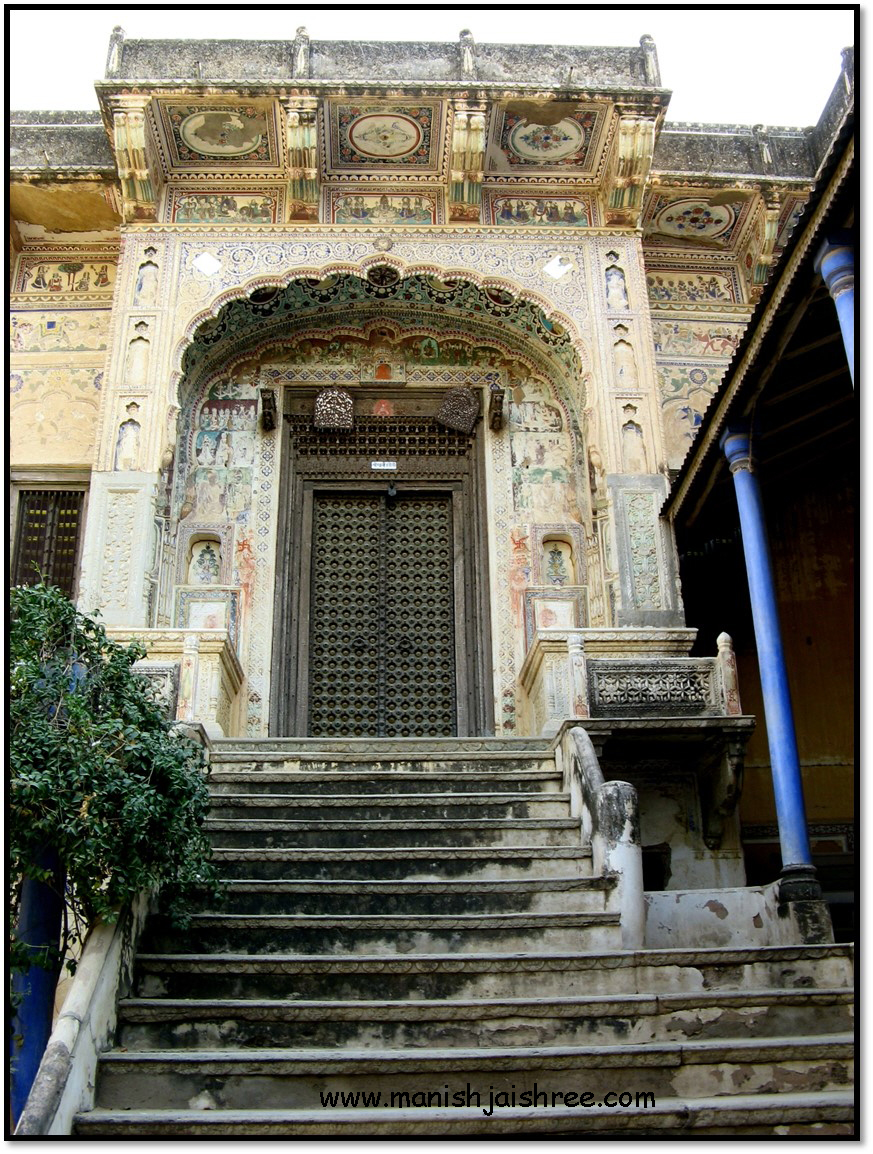 Then we went to see Goenka’s double Haveli and a few others. The famous Havelis of Mandawa includes Binsidhar Newatia Haveli, Gulab Rai Ladia Haveli and Nandlal Murmuria Haveli. Our interest was dying, as we had to reach Delhi before 8:00 pm and the Havelis were better preserved in Nawalgarh.

Shekhawati is full of grand havelis. Most of these Havelis are abandoned and are in dilapidated state. They need maintenance and renovation. They are succumbing to years of constant neglect. And the reasons this national treasure is allowed to deteriorate are manifolds.

Another option to save them could be that they are sold to buyers in tourism or hotel industry. This is also not a viable situation as

It was Lunchtime, so we asked locals for a place to have home cooked food. They suggested us a house in front of an old closed mill. Only two options in “Sabzi” were available. We had our lunch there and the food was homely & delicious. In Noida and Delhi restaurants, the food is almost same everywhere and is exorbitantly costly. If someone taste food with his closed eyes it would be difficult to differentiate between different Sabzis. All Sabzis taste similar as gravy dominates the taste. Here even with the very limited options we all enjoyed the food.

It was time to return back. I felt a sudden rush of emotions as a part of me is Shekhawati. Shekhawati is not far from Jaipur. It is in a state that is very well marketed to the tourists. Still very less tourists visit Shekhawati. Those individuals who are able to reach are rewarded with the scattered treasures & beautiful landscape without hordes of tourists. And most of them tend to spend more time then they have planned. 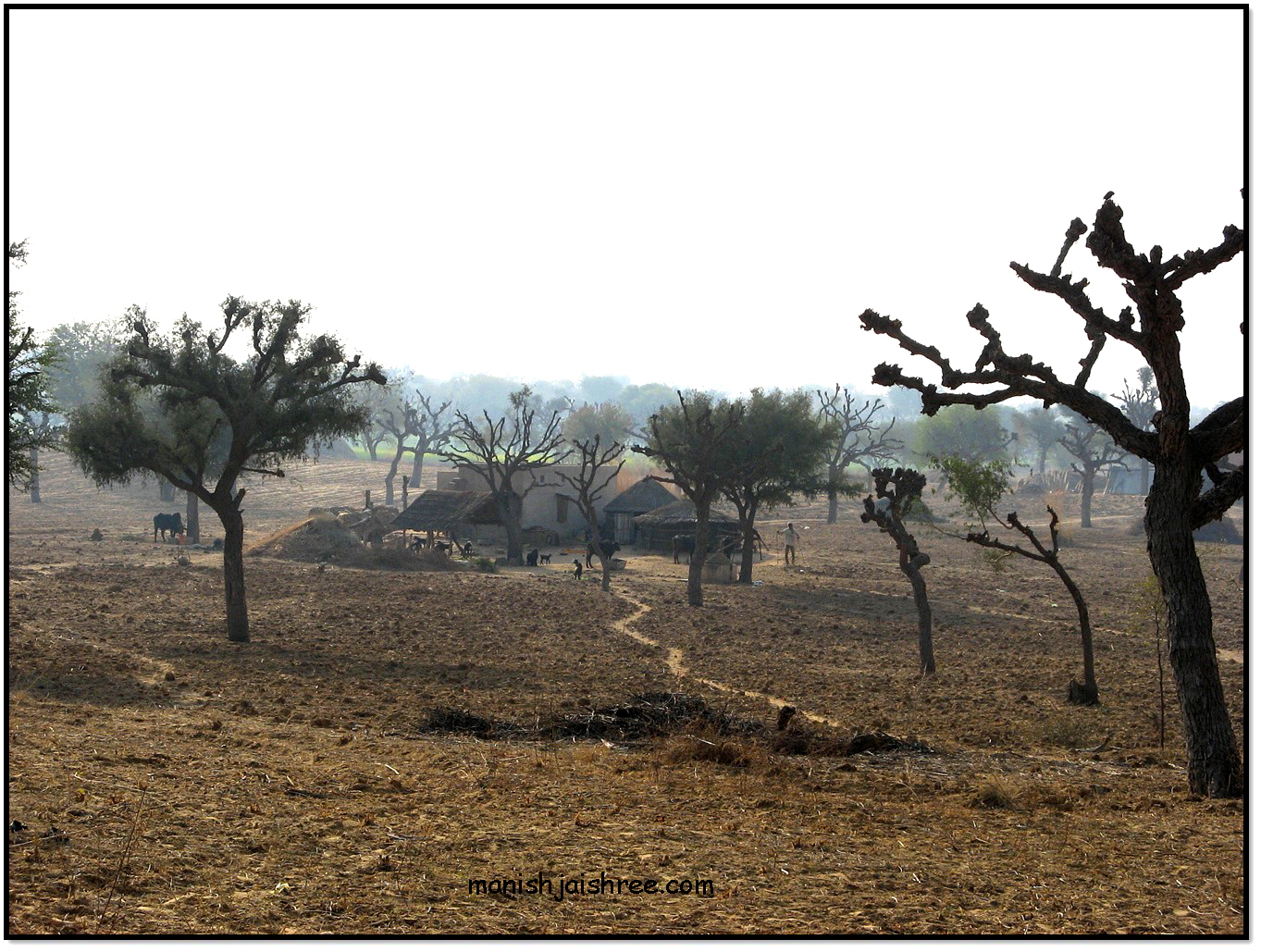 Hello People!!! Last year, I had the oppurtunity to take one of my groups to a campsite in Himachal which is closeby… 377 Kms from…