We were all set for our much awaited holiday trip to Naukuchiatal and it was perfectly rejuvenating.
Naukuchiatal – it’s a less explored destination as compared to Nainital.The Lake has nine corners, and one of the biggest lake set in mid of hills. Fortunately it’s not spoiled like Nainital Lake with all that litter around. Lake is surrounded with hills covered with thick layer of trees. One can enjoy sitting near the lake & watching various birds around it.

11th July’12 – We decided to start around 5 in morning, but we were slightly late this time and it was about 6-6.15 a.m we started our journey. We got our car tank filled up at Faridabad and were all set to funtime. I-pod was playing all peppy song, and I started enjoying my ride like a kid, shaking my head on music and carrying a big smile.
We decided to take most common route despite reading many blogs stating traffic issues. The root we took was-
Noida – Hapur-Gajraula- Moradabad-Rampur- Bilaspur-Rudrapur-Pantnagar- Haldwani-Kathgodam-Bhimtal-Naukuchiatal.

Total distance was about 320 kms and expected travel time was 7-8 hrs. We reached NH-24 near Indirapuram via Noida from Faridabad and it took us about 1 hr.The road condition from Ghaziabad – Hapur was good but it didn’t feel like NH.However as we crossed 1st toll, the road began to wide & there we were, full on speed. It was good 100-120 kmph speed.

I was amazed to see how roads have improved in last few years. I was expecting some traffic near Brijghat before Gajraula but to my surprise, they have widened the bridge and traffic flow was smooth. We planned to have breakfast at famous Tadka Dhaba, but by the time we were near Gajraula, food craving was on my head. We could not resist as we saw Bikanerwala on way and decided to stop. Hot Aloo parantha and fresh vada was a perfect breakfast followed with not so good Georgia tea, but good enough to charge us. We took about 20-30 min to satisfy our hunger & were on road to explore further. We had enjoyed meals at Tadka while on return though, paranthas were good and small shop selling pedas was awesome.

Drive till Moradabad toll was smooth, a lot of road widening work was in place, yet we saw some more construction. I hope by next time drive will be smoother.
As the road hit T point after Moradabad toll road, we took right turn towards Rampur. Road condition was not that great, as road widening work was in progress. However due to less traffic we managed to cross without any hassle.
Near Rampur Railway Station we turn towards Nainital as road gets divided here for Lucknow & Nainital.Now we were on NH 87.First few kms were not great. As we drove further, road became much better – mango orchards around, lush greenery on both sides, I managed to get some clicks while moving in car. One can see lot of fruit seller on sides of road, and we also decided to taste those tempting mangoes. After a drive of about 25 kms on this road, one hits Bilaspur – this patch is little bad, due to narrow road, shops on side, city traffic.

As one crosses the city part, the drive again gets smoother; the drive between Rudrapur to pantnagar is very scenic, both road sides covered with dense lanes of trees. We reached Haldwani around 12 & crossed kathgodam within 30 mins.Haldwani & kathgodam are on foothills of kumaon region.Moonsoon on hills makes it beautiful, plants & trees looks so fresh after much awaited rains. The route for Nainital & Naukchiatal gets separated after 4-5 kms from kathgodam bridge. Naukuchiatal is about 5 kms ahead of Bhimtal; we had booking in Club Mahindra. 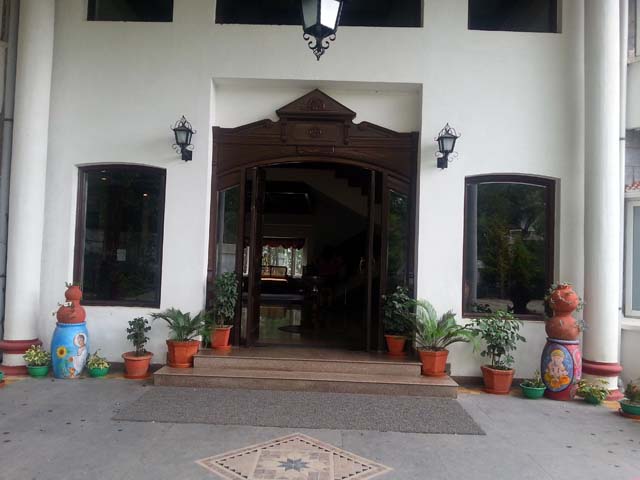 Rooms on back side have partial lake view. It’s a small resort of 30 rooms approx.We reached there around 1 p.m , welcomed with tikka & a drink. After delicious Rajma chawal, it was time to check around the place near resort. Back lawn had swings – which reminded me of childhood, and the kid inside me wanted to enjoy the same. 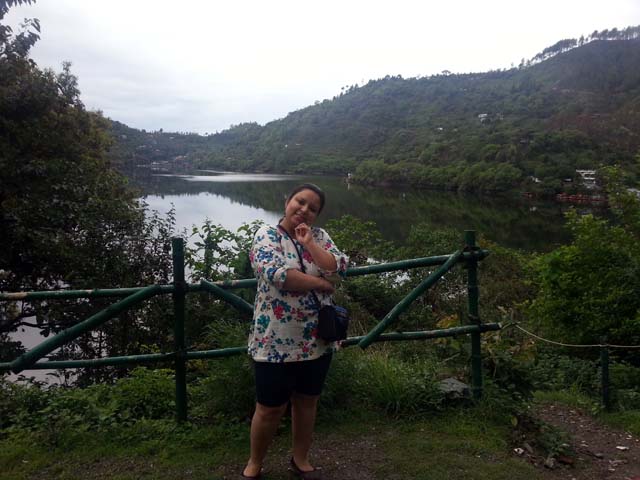 View of Lake from the resort

There was a small passage toward lake, as we went down a bit; we discovered there was way down to lake. I was not so enthusiastic about this resort as reviews were not so great, but this location made up for everything. I think it’s just not possible to put across the feeling of sitting near lake, and my eyes could either see water or hills covered with dense rows of trees, my ears could hear birds singing around me. 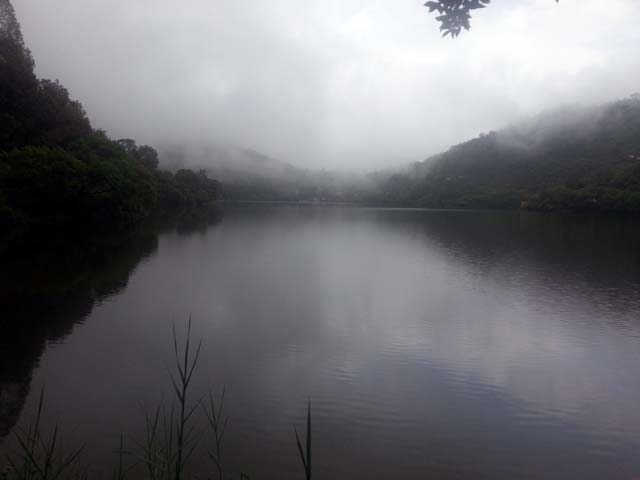 After spending sometime near lake, we retired back to our room to catch small nap and winded up the day with nice dinner and slept like a kid. It was surprising lazy ones like us were up at 6 in morning without alarm. we decided to take go fora walk. 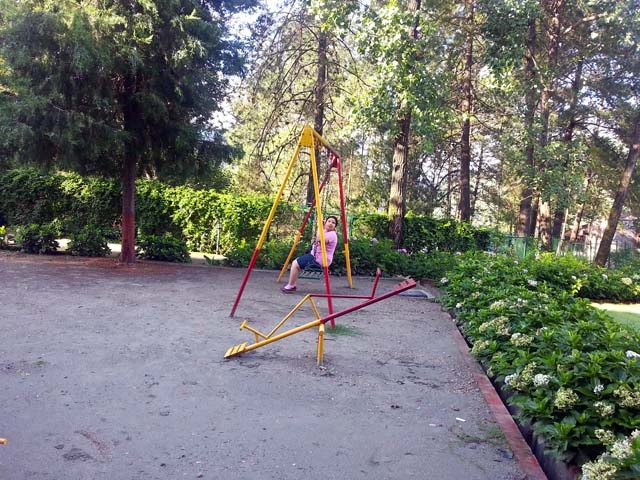 After a good stroll, my hunger meter was on & I enjoyed a nice buffet spread at restaurant. We went again for best spot near lake side & enjoyed the peace . One shikara was approaching us & he offered us to take ride in lake. He also offered us cab service for local sightseeing. We decided to visit Sattal which was about 15-20 kms from our place. After taking a nap, we were ready to go on sightseeing, we preferred to take cab and rely on local info. 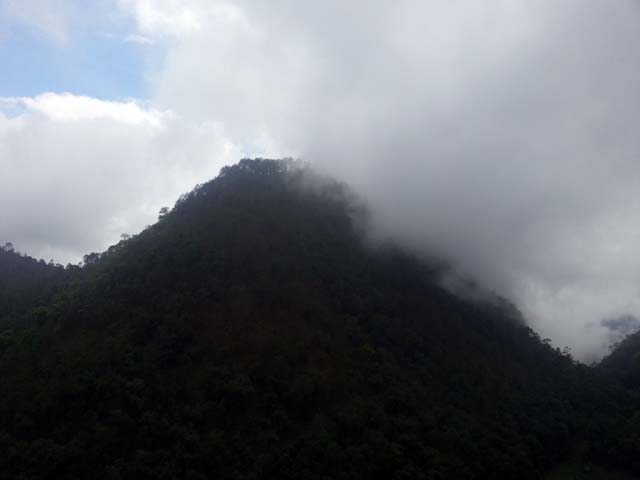 While on way to Sattal, we also explored Naldamiyanti Tal & Garuda Tal.The drive was very scenic and Garuda tal was worth going. it was a perfect place to have a picnic or just being in lap of nature. Sattal was little commercialized & we just spent ½ hr there.

We thoroughly enjoyed drive to less explored Tal.Next day we decided to take boat ride, the boatman came near lake point close to resort & as we started our ride, weather took 360 degree turn, whole lake got covered with fog and cloud, it started raining a bit. I must stay this was my best experience of rain, we dint bothered to click as didnt want to miss any moment of true mesmerizing feeling of being in mid of huge lake covered with dense fog, we couldn’t see much around us, and we could feel drops of rain on us. After our ride, we spend somemore time near lake and went back to our rooms. Day was spent leisurely within resort. 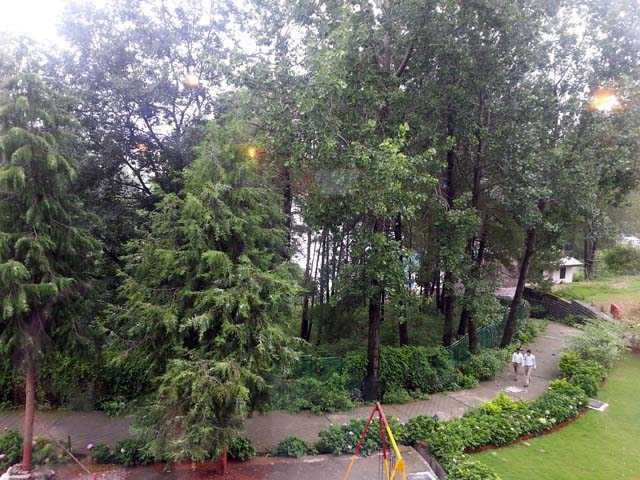 It was last day of our trip and we decided to go again to lake in early morning, strolled a bit and it was time to back to our routine life, with a thought to settle down someday at such location

Eager to travel as much possible.I am fun loving person, foodie -Like a true Delhitie& always up for exploring places.

My favorite, never take the route back which you take to reach a destination, thus maximizing the opportunity to explore and know more. There are so many places in AP to Visit, so it was a week long plan to make a trip. I had 3 days in spare and almost 700-800km or budget based on my car’s milage. We were longing for Suryalanka beach from long, its the nearest beach from Hyderabad, not much advised in summer but still a beach is my attraction. We listed down, bora caves, bellum caves, warrangal, vijaywada, srisailam, nagarjun sagar, suryalanka, vishakhapatnam and many more. Finally, friday afternoon I decided for Srisailam, a piligrimage with just 200 odd km away from my home in Hyderabad. So, I texted my wife and my brother in law (he was on a short visit to our place) that pack your bags we are going to “Suryalanka”… that was an inadvertent mistake. Which I did not realize until I reached home from office. I was surprised to know that my family was apparently happy to know that we are going ot Suryalanka. I spoiled their excitement admitting the mistake.