I shared in my previous article how we made the most of London in two days with its absolutely impressive grandeur. On day 3 (June 13), we checked out from Hotel Premier Inn at 8.30 a.m. after breakfast and started for by coach. We passed through the back side of the Heathrow airport, just close to the hotel. It was really a very large port, having a number of hangars. One can understand that every minute there is a takeoff or landing. We reached at Dover Port after travelling a distance of 200 Km. in three hours. On reaching there we saw a long range of very high hills of marble on our left and the English Channel (Adriatic Sea) on our right and that was really fascinating. Here, immigration for Paris took a long time because of long queue and individual checking of each of the passenger. Then at 2.30 p.m., we entered the basement of a Ferry (ship) along with our coach. There were a large number of buses and cars in the basement. We went to first floor of the ferry which had many restaurants, coffee shops and other stores etc. We enjoyed our lunch by the side of railing of the ship and seeing the fine view of sea and its high waves and then went to the deck on the second floor. The winds were chilly and fierce, so we could not stay for a longtime. Taking some good photos of the ship and the great sea, the journey of 35 Km. passed by too quickly and we reached Calais Port of the France. At 3.30 p.m. we boarded another coach and mind you it is right hand driving in whole of Europe, and reached Paris at 6.30 p.m. after covering a distance of 190 Km.

We were scheduled to reach straight to Seine River but it took a long time due to heavy traffic jam in the city. At Seine river, a 445Km.long river flowing from Digon in the Alps and through Paris and joining sea at Le-harve on French coast and an important commercial waterway within the Paris basin, we boarded a cruise and sailed through it for a long time. It passed through many bridges. On one side of the river there were some gold plated beautiful and high statues and the great Eiffel Tower on other side made our sailing very pleasant and colorful. Soon after that we dined at an Italian restaurant and reached Hotel Pulwama, situated near famous Charles de Gaulle airport. 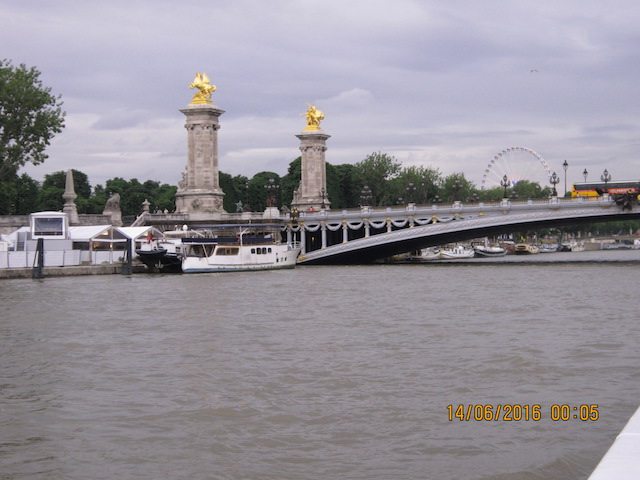 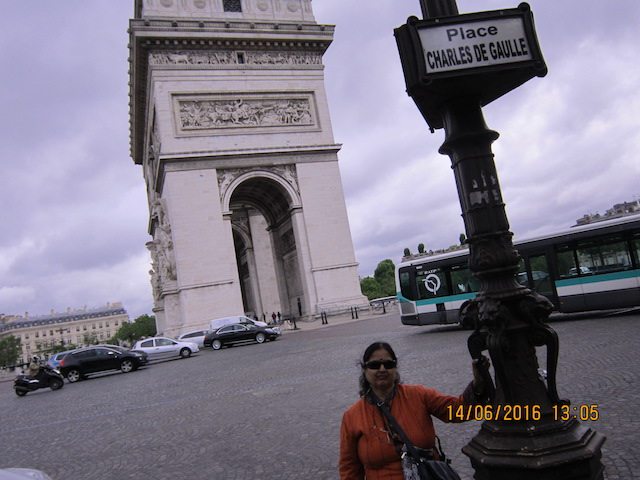 On the morning of Day 4 (June 14), we started at 8.30 a.m. for a half day visit to Paris city and a visit to Eiffel tower which is a wrought iron tower constructed in 1889. We passed through the main city of Paris seeing a number of beautiful and memorable buildings, monuments and markets. We had a local guide who smilingly described about the Paris city, its great history and its monuments in a very lucid and interesting way. The important monuments we saw were National Assembly, lower house of French Parliament, Maitten Church, Opera house, Concord Square located at the very beginning of Champ-Elysee (known as Arc-de-Triomphe) a very large arch/gate like the India Gate of New Delhi, Oblique which was presented by Luxemberg, Invaliades, and big and high Dome where the great Napoleon Bonaparte was buried along with his brother and son. Now we proceeded to The Eiffel Tower, the tower is one of the tallest structure in Paris and is 324 metre tall, constructed and engineered by Gustav Eiffel. The tower has three levels for visitors with restaurants on the first and second levels. The top level has observation deck accessible by lifts. But upon reaching there we came to know that there is National strike by its Labour Union in whole of the France resulting in closure of all the main roads of city and therefore the ride of Eiffel Tower was not possible at all. It greatly disheartened us and our tour manager too. He managed to take us to another high-rise administrative building of 59 floors. Its lift took only 25 seconds to reach on an open top floor. From here the whole panoramic view of Paris was before our eyes, moreover the great Eiffel Tower was seen at some lower height.

During all this time we could see sculpture of monuments, planning of roads and residential colonies its similar color and designing making the whole Paris unique. We also come to know about living, culture and fashion of it for which it is known in the whole world. 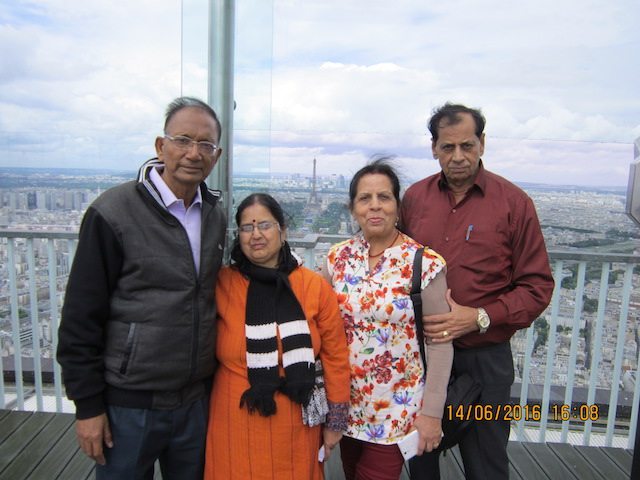 In the second half of the day we had to leave for Disney Land but the city was covered by banners displaying their anguish against the government, processions of the labourers on strike and road jams so it took a long time to reach there and it was 3.30 p.m. and much time was wasted. There were two choices for us either go for Disney Land or Disney Studios. As we know that Disney Land has a number of joy rides mainly meant for youngsters, we opted for Disney Studios. Here we saw many techniques used in filmmaking, how the lightening, thunderstorm, rains, fire are produced mechanically. We also saw many film sets and shows depicting some unusual and thrilling effects used during the making of a film. We also saw a film related to popular cartoon characters. We were now running short of time and studio was going to close at 6.00 p.m. Actually one needs a full day to see it. Now as usual we returned to our hotel after dinner. Tonight, there was a program to see the famous Lido Show starting at 11.00 p.m.. Most of the members of tour went to see it. On the way we again came across the Eiffel Tower that was well illuminated with colorful lights in night giving a very sparkling look. Then we entered in the arena of Lido show which started at 11.00 p.m. and ended at 1.30 a.m. The dances in Lido Show were fabulous but its stage management was superb and of top class.

Next morning was the day to leave Paris and move onwards to Switzerland. In this tour we could not get a chance to visit world famous Louvre Museum due to shortage of time. We checked out of our hotel at 8.30a.m. to travel 500 Km. to reach Basel city, the last station of France. From there we entered in the territory of Switzerland after some immigration protocol, we travelled a distance of another 100 Km. to reach our hotel in Effilton City where we reached at 7.30 p.m. We spent the whole day in transit and went to sleep post dinner. In the next part of the story, I shall describe the beauty and marvels of Switzerland. Please stay along.

To Paris by the sea and the power-packed tour of the most romantic city was last modified: October 24th, 2016 by Pramod Saxena

Pramod Saxena, a retired Lecturer fond of literature but lover of nature. Has immensely travelled in India. From Badrrinath, Haridwar, Mussourie etc. in the North to the Coastal area of Maharashtra,Gujarat, Kerala, Tamil Nadu, Andhra Pradesh in the South and West Bengal, Orissa in the East, up to Rajasthan in West. Recently visited U.K., France, Switzerland and Italy. Still very eager to explore beauty of new places left untouched.

My co-passengers were all as tired as I was; one of my friends brought some food, and invited me to share it with him, which I did. We prayed the Dhuhr prayers, and then went to the Holy Mosque to perform the ARRIVAL circumambulation (7 rounds around the Holy Kaa’ba). I continued after this to also complete 7 lengthwise walks between Safaa and Marwah.