On climbing a few steep steps the passage suddenly opens up into a huge square shaped courtyard with intricately embellished sandstone walls and windows with elegant latticework. The upper floors are adorned with resplendent cenotaphs wherefrom superb views of river Betwa passing along the reserve forest beckons wanderers with unfailing charm. We are in ‘Jehangir Mahal’, indisputably the most imposing palace in Orchha. In the nearly forgotten capital of mighty Bundela Rajputs, this beautiful but unkempt monolith stands testimony to a sordid tale of Mughal India. Abul Fazal, the great scholar and one of the nine jewels in Emperor Akbar’s royal court has never kept his disaffection about Salim’s meandering ways a secret and harboured serious reservation for the empire’s future on his accession to Mughal throne. Salim therefore hatched a conspiracy with Vir Singh Deo, the Bundela chieftain and got Abul Fazal assassinated in Bundelkhand in circa 1602, during the scholar’s return journey to Agra from the Deccan. Subsequently Salim accessed the throne and assumed the title ‘Jehangir’ and also crowned Vir Singh as the King of Bundelkhand. On his part, Vir Singh constructed this fabulous palace where Emperor Jehangir stayed during his visits to Orchha. It was a win win situation for both conspirators, only the Indian history lost the great author of “Ain-I-Akbari” at a pre mature age of fifty one only. 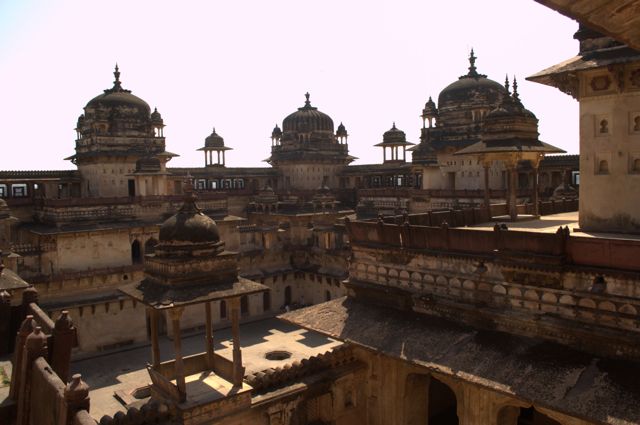 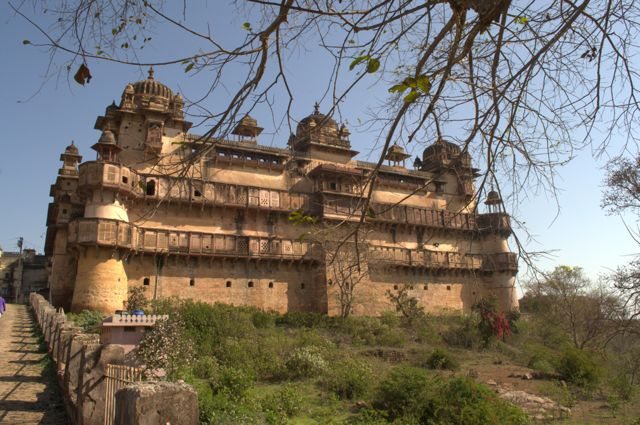 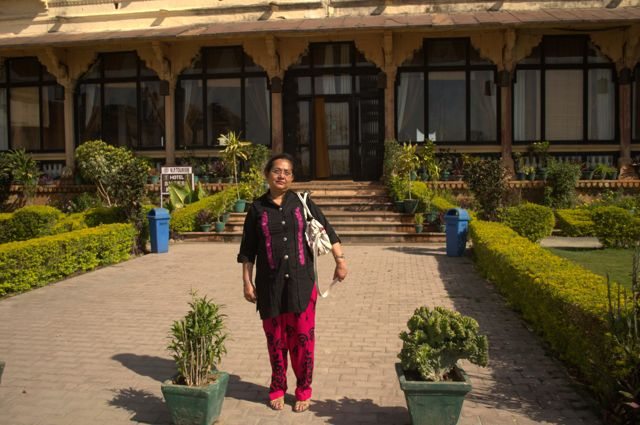 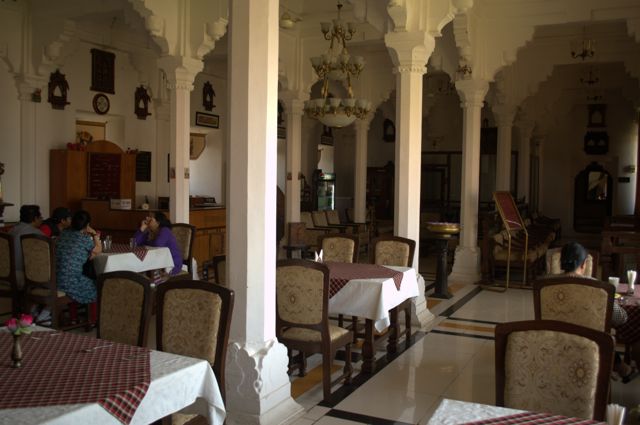 Not only huge palaces but also there are many temples dotting the land. Prominent among them are Chaturbhuj temple, Ram Raja Temple and Laxmi Narayan Temple. Out of the three, Chaturbhuj temple is the most imposing. But it is intriguing that Ram Raja Temple is the only temple in India where Ram is worshipped not as a God but as a King, seated on a throne. “Aarti” in Ram Raja temple is fascinating with devotees chanting in the radiance of the ornamental diyas. Laxmi Narayan Temple is on the outskirt of Orchha and we missed the visit as it was a ‘Holi’ day. Locals informed that this is the most decorated and ornamental of all three. The ceiling of the temple is said to be marvelous as every inch is covered with assorted murals of the Bundela school of paintings. 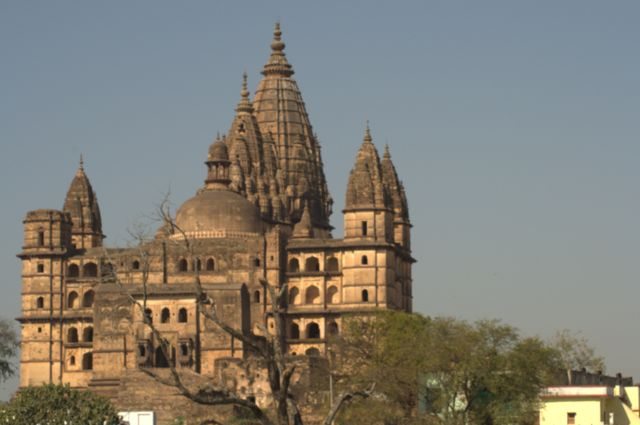 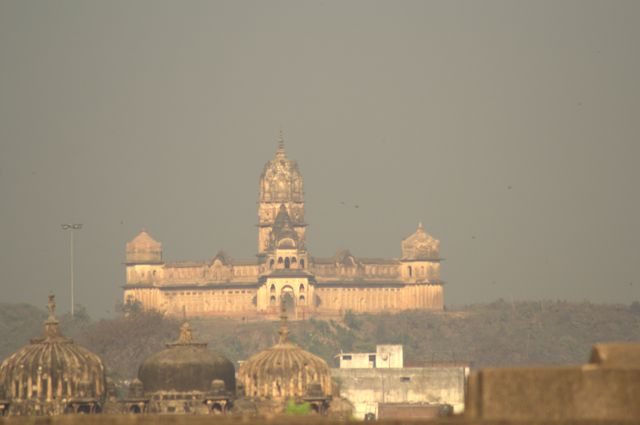 The early morning stroll along the nature walk on the fringe of the reserve forest was fascinating. We crossed the bare granite bridge over river Betwa to reach the forest. Thereafter, a forest road ran miles after miles bisecting the reserve forest till it reached ‘Tikamgarh’. Luscious streams of water were gleaming past the boulder strewn river bed. Cenotaphs of all past rulers of Orchha were lined up on one side, silently but unmistakably reminding us about the transience of human life. It was serenity at its best. 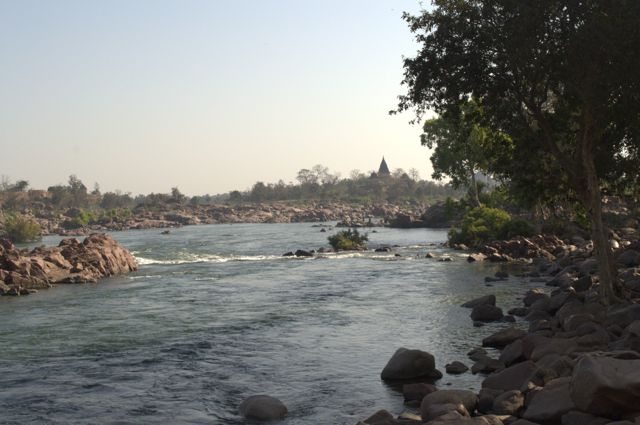 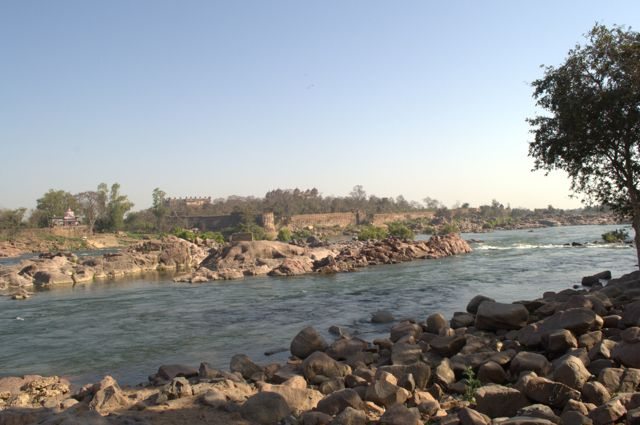 We reached the same spot again before the onset of the evening. This time the place was agog with expectations of witnessing a fabulous sunset. There were photographers all around and Indians were hugely outnumbered by foreigners. My name sake Abhijit and my son Chirojit were furiously active on taking shots on every movement of the sun on river bank. The expectations were, however, not belied. Slowly but surely the red ball started pouring molten gold in the river…the shadows of the lined cenotaphs started growing longer and longer. Ultimately the sun lovingly kissed the river Betwa taking away one more day from all our lives. 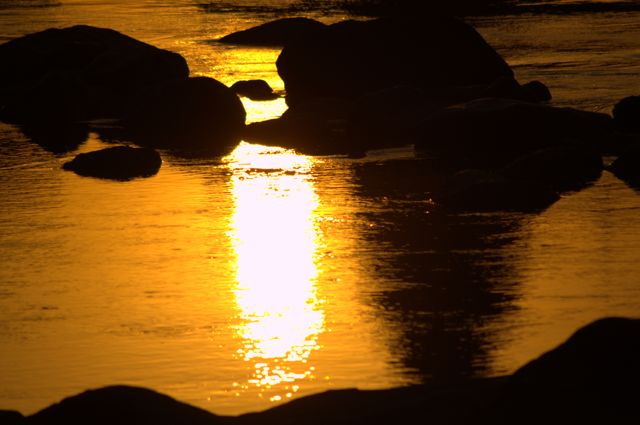 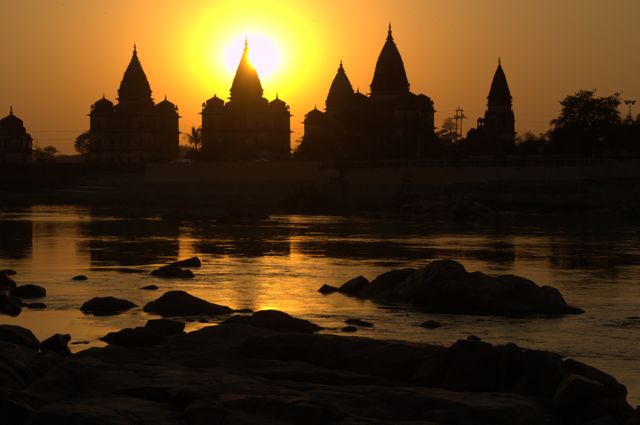 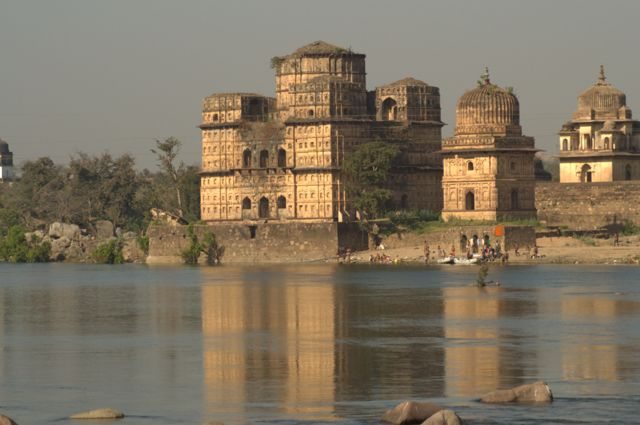 There were two resorts on the river bank facing one another. Seating on the terrace of the restaurant of one of them and sipping cold coffee we were silently ruminating the extraordinary experiences. There was a mild wind blowing from the river side. Orchha by this time fell absolutely quiet after spending a hectic day of “Holi” and the full moon replaced the sun and was already over hung. Nature never keeps a vacuum and life goes on….and so there was another night fall.

On our way back from the river bank we decided to follow a tip from the “Lonely planet” guide book. The idea was to cross check their recommendation about the eatery called “Bhola Restaurant” on Sheesh Mahal road, and their ‘Honey Parota’, in particular. It was a small eatery but well frequented. However once we tasted the item, the culinary expertise of the guide book fell flat on its face. I wished if I could invite the Lonely planet correspondent to experience similar items cooked by my wife who was accompanying us on this trip.

Light and sound shows in Hindi and English were organized in the night at the open air courtyard of the Raja Mahal palace which was the next building after the Sheesh Mahal where we did put up. The quality of the show, particularly its factual contents leaves much room for improvement. The well known accidental death of Great Sher Shah Suri from a gunpowder explosion during the siege of ‘Kalinjar’ fort was portrayed like a defeat unto death at the hands of Chandela Rajputs! Similarly, the story of the assassination of Abul Fazal was penned on a different ink and the scholar was depicted as an army commander who met his death on having the imprudence of engaging with the might of Chandela Rajputs. M.P. Tourism would do well to look into these to keep the sanctity of the history intact. At the end of one such show we quietly entered into the Sheesh Mahal hotel when other tourists were leaving the same arena through the exit!

Going back to the maddening crowd in metropolitan cities after a trip to a serene place like Orchha was never easy. On our return journey in the next morning we took a detour of an extra one hundred kilometers via ‘Shivpuri’, by side stepping Jhansi – Gwalior road as the terrible experience with the said route while reaching Orchha was still afresh. Some patches of Gwalior-Jhansi road were truly nonexistent. We strongly advise all travelers to shun the Gwalior- Jhansi road for reaching Orchha and instead opt for the longer route via ‘Shivpuri’. 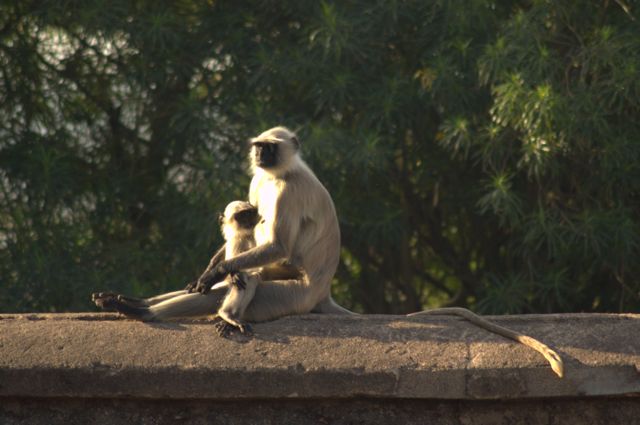 Return journey was smooth and after we had a fulfilling lunch in the Kwality restaurant in Gwalior, my son was speeding across the city. Seating besides him I could see the fleeting glimpses of the Gwalior fort but my mind was wandering elsewhere. It was lost in the corridors of “Hazar Duari PaIace” in Murshidabad where the original Persian script of the invaluable “Ain-I-Akbari” has been carefully preserved. 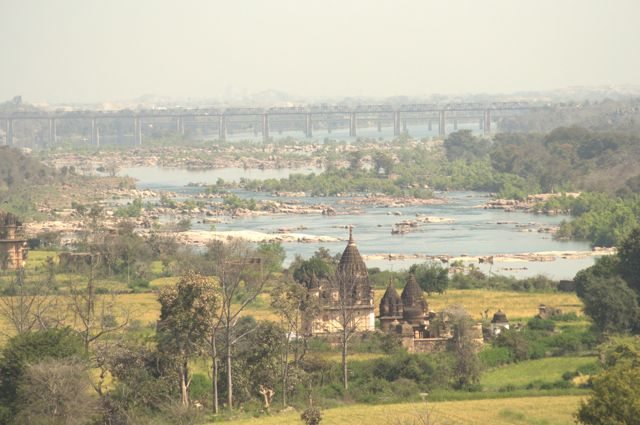 Twilight is dancing on the lake water. All the myriad reflections of life are alive. The sun is receding behind the mountains.  There are no more clouds in the sky. I wish for a starry night. Soon the last boatmen will oar his way back; his mind will be occupied by his earnings of the day. How much is sufficient, how much is luxury? In the end, we’ll all be Capitol Cinema – alone, old, dead.

My favorite bench near the band house is unoccupied. I scurry my way to it. The gurudwara, the oaks and the local salesmen stand tall. They have lived lives here, they are living lives here…