It was seven years back… we took off from New Delhi airport and I had embarked on my very first plane ride. We were going to Singapore via Kuala Lumpur.

We board the plane and find our seats. Clamp on our seat belts and wait. The plane gives a shudder, pulls back and taxies slowly to the runway. Here it stops for a few moments and then with a fast run lifts off. The buoyant feeling is wonderful. 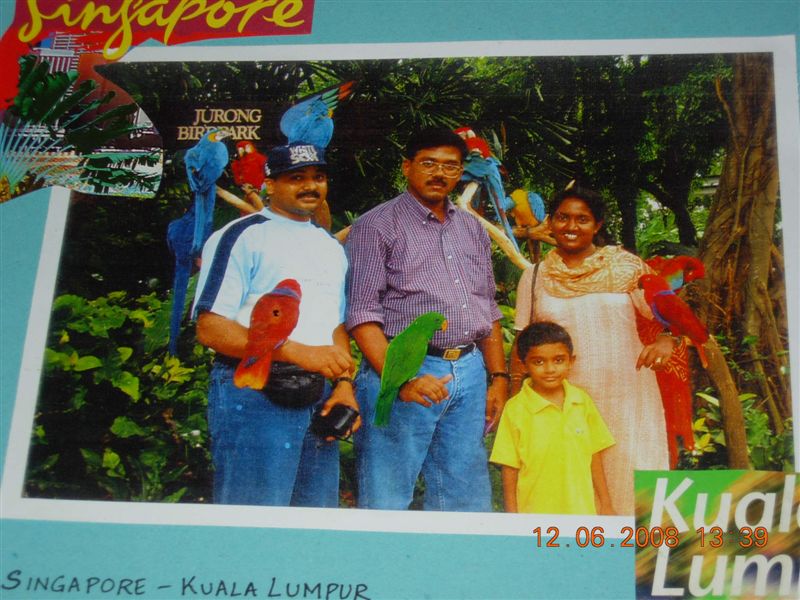 Before take-off we hear the pilot’s calm, confident and reassuring voice welcoming us on board and giving the details of the temperature outside.

As the plane climbs in smooth steps, we see the airport building and the waiting planes grow smaller. New Delhi lies glittering beneath us, dropping further every moment.

The morning take-off from Kuala Lumpur airport is as exhilarating as the one, the previous night. It is astonishing, the rate at which the plane gathers speed just before take-off. The rapid acceleration surprises everytime. We are borne into the air and the waiting planes at the airport recede into tiny toy ones. As we rise higher, the city below transforms into the creation of a modern artist. There are wisps of clouds at our eye level now. The plane rides higher on the cushion of air and takes us in to the clouds… oh, now we are above the realm of Gods!

We are flying over the clouds and can look down upon the mass of soft cotton that floats below us. Now and then, there is a break in the clouds which allows us a glimpse onto the land below. Slowly the clouds clear. We are now flying over small islands floating on a beautiful turquoise green sea. The ripples on its surface make it look like a transluscent crepe silk sari draped over mother earth.

From such a height, we can distinguish the depth of the sea floor by the variance in the colour of the sea. The ships and boats look like tadpoles with white froth tails moving slowly in the shimmering blue green sea.

We approach a big island now… we are flying over it. The landscape looks carefully handcrafted and manicured. It is a prim and proper, neat little place, where a Sumatran prince once thought he had spotted a lion when he landed on its shores. We are going to land in Singapore – ‘the lion city’.

We spent six days in Singapore visiting tourist attractions that we decided were must visits after poring over maps. We had the advantage of having a relative’s place to stay. Taxis are very expensive, but the efficient public transport system is enough to reach anywhere and a pleasure to travel by. This is where Sarva and me experienced the Metro for the first time. It is called the MRT (Mass Rapid Transit). The MRT train routes run in horizontal and vertical lines across whole of the small country. Then there are air conditioned buses that supplement this network very well. 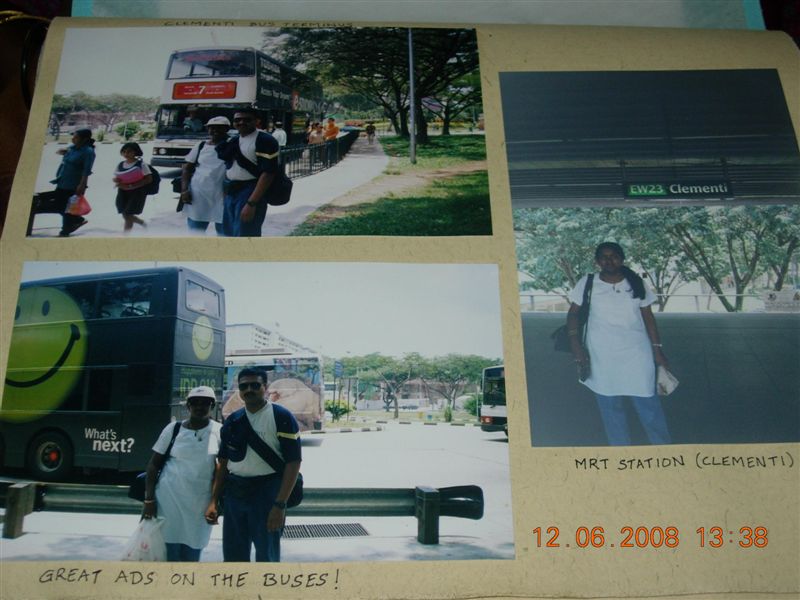 Double deckers & MRT station
There are excellent maps (available at all bus and MRT stations for free) that tell you the bus numbers and their routes, also how much fare it costs for traveling from point to point. You can use smart cards for the MRT, flip them over and use them while traveling on the buses! Most of the time it was fun deciphering which MRT to take and then which bus to connect to. At first, having experienced Delhi distances all our life we were surprised to find that in reality, the buildings marked in the maps were closer than we had imagined. Traveling in the airconditioned buses and MRT is cooool, compared to the tropical humid heat and sun that we experience while walking on the streets.

The city has a lot of green all around as the weather and the rains help the growth of vegetation. Jurong bird park and Singapore Botanical Gardens have been cleverly landscaped to mask the fact that the actual area is small and confined. The Jurong bird park is an open-concept one that houses 8000 birds of 600 species of south east asian birds. We took a trip round the park once on monorail that has a perfectly synchronized audio presentation going on all the time and that describes the birds that we witness.

We were amazed by the spectacular display of birds. There were flamingoes, toucans, parakeets and macaws. The birds seemed to be splashed with every colour imaginable on earth. We had our photographs taken with the macaws and parakeets perched on our arms. We visited the penguins and then it was time to watch a bird show featuring birds of prey.

In an open air theatre, trainers brought eagles, vultures and condors and explained their food and lifestyle habits. They even helped an audience member to let a falcon perch on her arm.

That evening we went for a boat ride at Clarke’s Quay on Singapore river. We had dinner at one of the many river side restaurants. If you are a sea food enthusiast, these restaurants would be paradise. Dinner beside the dark river with the city lights twinkling all round was a memorable experience. 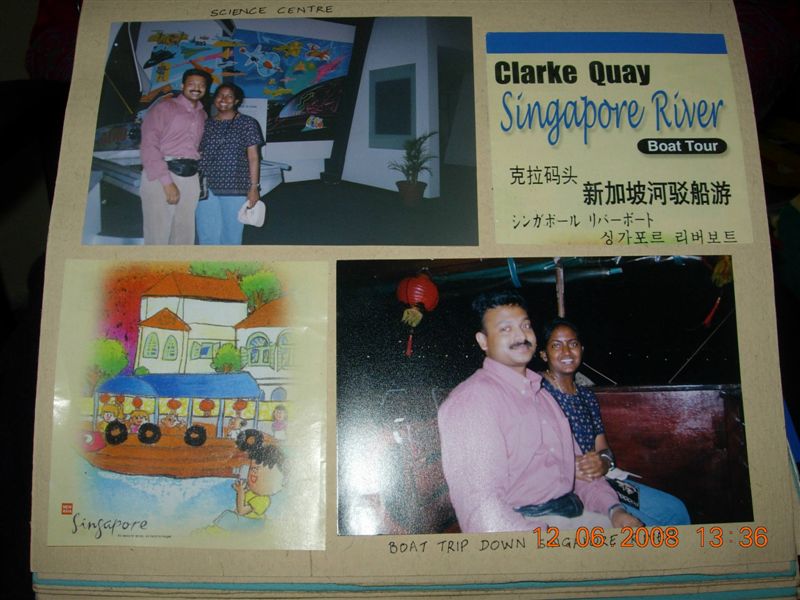 Clarke’s Quay
The next day we visited the Singapore Botanical Gardens. It has waterfalls, walking trails, ancient trees and a beautiful lake. There were some unique sculptures too. The beauty of Singapore I believe lies in the co-existence of vegetation that could belong to primeval forests and the very modern roads, transport and buildings. The science centre in Singapore has interactive exhibits and a Penguin enclosure.

We spent one whole day at the tourist island of Sentosa (which was nowhere enough) which I’ll describe as a separate story as one cannot do justice to it otherwise.

Among other places we visited were little India, St. Andrew’s Cathedral, Singapore Art Museum(showcases a lot of history) and of course the famous Mustafa shopping mall (where we bought a large suitcase and a Cannon SLR). 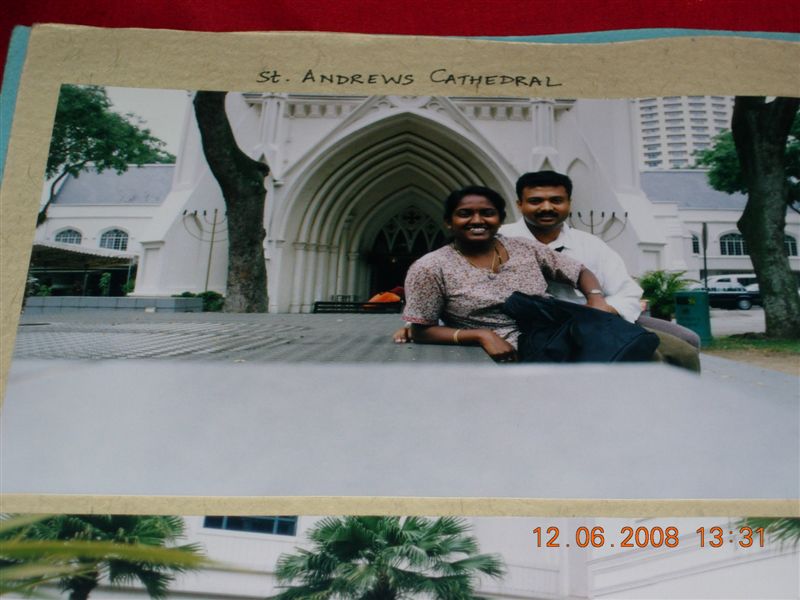 Outside the Cathedral
The Zoological gardens at Singapore have to be mentioned because of the unique natural barrier system that they follow. All the animals from deers to tigers are kept in enclosures that have no fences and no cages, only natural barriers. We traversed the zoo paths by taking tram rides for part of the way and walking the rest. Our most exciting moments were when we came face to face with a Kangaroo on our path… four feet in front of us… with a baby in its pouch! We stood still and admired it for a couple of minutes till it went on its way. As we exited… we saw within ten feet in front of us, a magnificient peacock proudly strutting by. It was an awesome sight to witness and we were perfectly conscious of the absence of any cage or wire-netting to impair our vision. 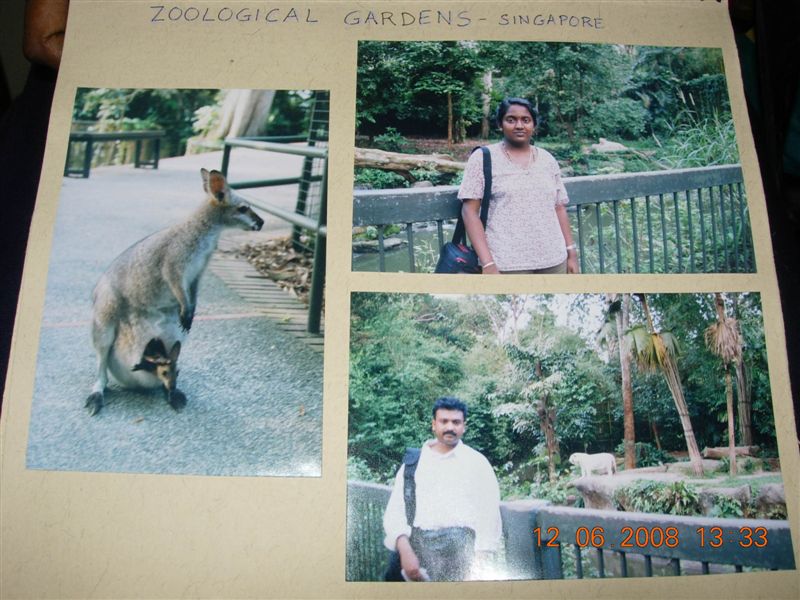 Cageless zoo
The night safari, a tour of the zoo offered for seeing the night animals was exciting but we couldn’t help comparing the artificial element in the safari with the wild and natural elephant ride that we had been to in Corbett National Park just a month before.

Whenever we dined outside we had a wide variety of places as well as cuisines to choose from. There were fancy restaurants, food courts, McDonald’s (though the veg menu in McD’s was severely limited). I ended up trying a lot of tofu dishes. We had a wholesome and memorable travel experience in Singapore.