During the Diwali holidays of 2010, me and my wife planned on a trip to Mangalore and surrounding places in South Karnataka. We boarded the Chennai-Mangalore West Coast Express at our home town of Tiruppur, at 7 pm on the 6th of November. After a hearty dinner of parrottas from the Pantry and a nice sleep, we reached Mangalore Junction at 4.45 am. We checked into Hotel Srinivas (where I had already made my booking) just 1.5 km from the railway junction, had a quick bath and returned immediately to the station to catch the Mangalore-Madgaon Passenger(Konkan Railway) departing at 6.20 am, for our trip to Murdeshwar Temple, 165 kms from Mangalore.

The train journey was through a beautiful route (on which we had already travelled twice before on our trips to Goa), passing through lengthy tunnels and backwaters.We reached Murdeshwar Station around 10 am and took an auto to the Temple some 2 kms away. The whole temple area and the adjacent shops and hotels were jampacked with tourists from all over Karnataka and from nearby Goa, enjoying their Diwali holidays. We had our breakfast at the crowded Kamat hotel just in front of the Temple. On reaching the temple, you are welcomed by a tall, imposing Gopuram(temple tower), flanked on both sides by the Arabian Sea. Interestingly, there is a lift to reach the top of the Gopuram from the ground floor at the Temple entrance(I have never seen such a lift inside a gopuram, in any other temple). The charges for the lift are Rs.20 per person and the lift takes you to a platform inside the gopuram just below the top tier. The views from the platform, of the sea surrounding the temple from the three sides is truly amazing. But the real highlight is the view of the mammoth Shiva statue, constructed a few years ago, on a hillock behind the temple. The statue and the sea behind it, when viewed from the platform at the top of the temple gopuram will leave everyone spell bound.The trip to Murdeshwar is worth just for this single view.

The temple tower with the lift 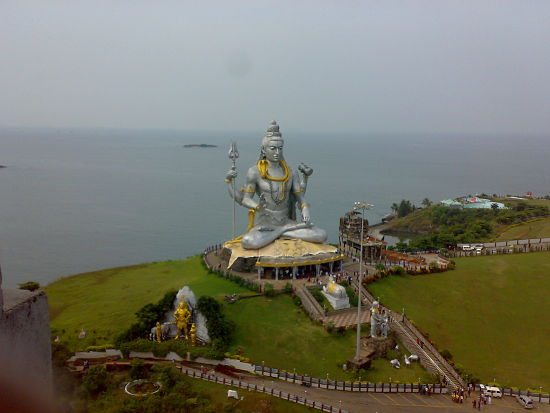 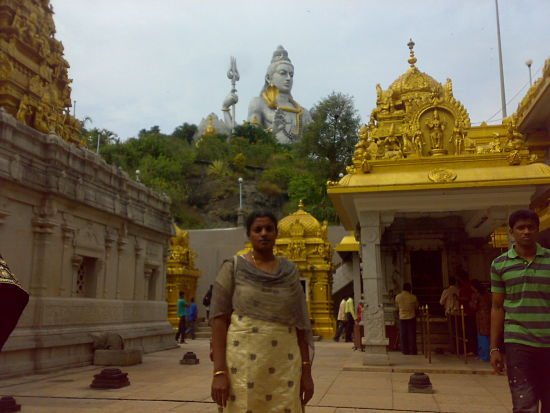 shiva statue backdrop from inside temple

After the views from the lift, we went to the temple for the darshan. After the darshan, we went behind the temple to have a real close look at the massive Shiva Statue. Really you run out of superlatives, describing the imposing statue and the beauty that surrounds it. The spot is a photographers’ delight and there were numerous domestic and foreign tourists, clicking away merrily from all possible angles. We too gladly did the same. There is also a small cave like enclosure, under the pedestal of the statue, where one can view a lot of beautiful statues depicting the history of the temple(if i remember correctly). The entrance charges to this place is Rs.10 per person. The beach on the north side of the temple, is a nice place for bathing and water rides. The waves too did not look too rough, and there were a lot of kids who were having a great time.

the master of all he surveys 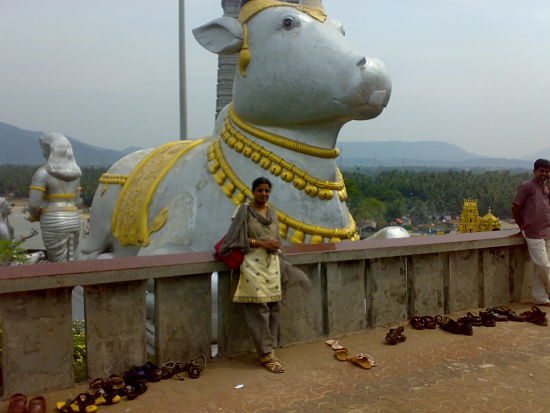 Nandi in front of shiva statue

Sculptures beneath the statue 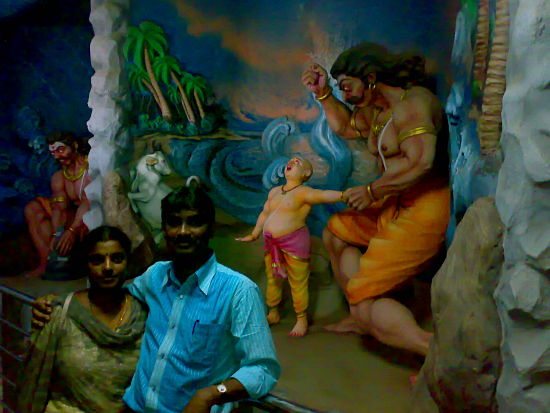 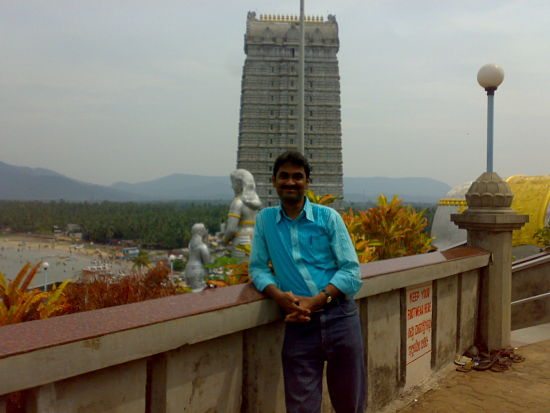 Gopuram view from foot of statue 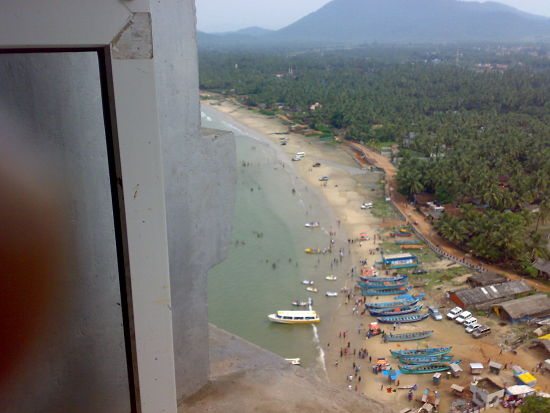 We returned to the Mangalore-Goa highway(NH 17) and took the bus to Udipi at around 12.15 pm. The condition of the road to Udipi was pathetic(remember it is a National Highway) and we being used to well maintained roads all over Tamilnadu, found the journey unbearable. Even the sight of the beautiful Maravanthe beach, situated right by the Highway (15 kms before Kundapura), wasn’t enough to mask our discomfort. We were relieved when the State transport bus reached Udipi at 3.30 pm. We had a nice lunch at Shiv Sagar, a very good vegetarian restaurant at the heart of the town. We reached the famous Udipi Krishna temple at around 4 pm and were surprised to find very little crowds. We had darshan twice in around half an hour, which was an unexpected bonus. We took the bus back to Mangalore at 5 pm and thankfully the road from Udipi to Mangalore was good and we reached mangalore at 6.30. Since we did not want to return to our room that early, we enquired the locals about some interesting place to visit inside the town and went to Kudroli temple(situated in the heart of the city, just 2 kms from the railway station). It was a very famous temple among the locals, and there was a big crowd. The temple had a lot of grandeur and was well illuminated and the lights presented an appealing view at night. After the temple visit we had a very good North Indian Dinner just near our hotel and returned to our rooms, very very tired.

This Gurudwara was built by Raja Joginder Sen of Mandi in respect of Guru GobindSinghji. Guru Gobind Singh came to Himachal to seek support from the hill kings, for his fight against the muslim invaders. He chose Rewalsar as his camp site and had his meeting with hill kings and chalked out plans for a joint strategy against the invading armies of muslims. Guru Gobind Singh ji was so impressed by the holy vibrations of this place that he stayed here for more than a month and later Raja of Mandi built this Gurudwara in his memory.