It is Canada’s second-largest city, but feels European. The most widely spoken language here is French. Narrow streets meander through some beautiful marvels of architecture. Night-life begins even before dusk, and lasts well until dawn. Montreal is magic.

Have spent some time in this beautiful city, and am loving it so far. Was witness to some amazing views when climbing up Mt. Royal yesterday. This is the mountain (Mont Royal) that gives Montreal its name. 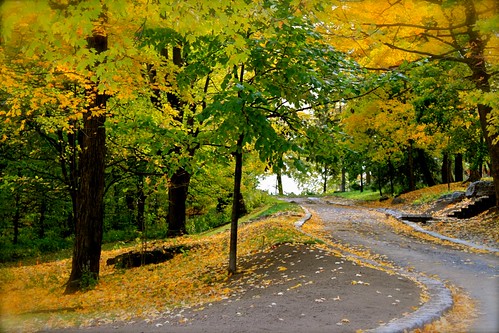 On way to Mt. Royal, Montreal

The mountain has 4 peaks and provides some beautiful views of Montreal. Below is one.

The climb up the hill wasn’t tiring at all. So we headed further to the Old city. It is a place of narrow streets, small shops, friendly people and a European feel to it. One finds small restaurants and large art shops in the streets.

An Art Shop in Old Montreal

The edge of Old city leads to the waterfront. The best way to get around is to walk. People on the streets are very friendly. And the day we headed out, fall colors were out in full splendor everywhere. Below is a picture. Montreal is pretty and fun so far!

Having visited various places in North America recently, I can confidently say that Montreal is among the most lively and friendly cities. There is a lot of art, culture and beauty here. A must-visit in Canada, certainly!

P.S. — Getting there: From within Canada, try VIA Rail. It is slightly expensive, but you will have a nice time. (I liked it). Book a few weeks in advance for discounts.
From outside Canada, flying is fast and easy. At least 40 major airlines fly direct to the Montreal region.