Corbett National Park is located just 71 km from Nainital and the drive is just wonderful both for driving and visually. The park is divided into 4 main tourist zones – Dhikala, Bijrani, Jirna and Durgadevi in the order of preference by tourists. Dhikala and Bijrani have perennial water sources and hence the chances of sighting the tiger are more. Jirna, on the other hand has water during the monsoon while dry during the summer. Durgadevi has both hilly terrain and is far and hence is least preferred by both tourists and gypsy drivers alike. Bijrani is nearest to Rampur town while Durgadevi is farthest. Entry to the Dhikala zone is though the Dhangadi gate which also houses a pretty good museum. Day Safaris are allowed at all zones except the Dhikala zone. A conducted day tour by a canter van is allowed to the Dhikala zone. Alternatively safaris and private vehicles are allowed into this zone only if one has overnight stay bookings/permits for the forest rest houses in the park. 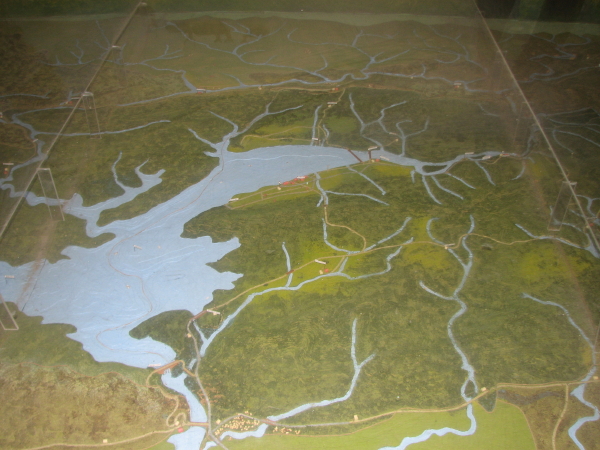 On our first day at Corbett we managed to hire a gypsy into the Jirna Tourist zone in Corbett. Unfortunately we could not get the morning safari or the afternoon safari to Bijrani Tourist zone. Both the driver of the gypsy and the guide warned us that it would be difficult to see any sightings as the Jirna area lacked perennial water sources. Sure enough, as the hours went by we sighted just a few monkeys and Deer as well as some birds. For a few moments we heard birds screech and the driver stopped expecting a call (that’s local national park lingo for a tiger roaming about – the other animals sound the alarm and this is termed a call). However it turned out to be a false alarm. On our return we sighted a few deer and smaller animals but not the elusive tiger. 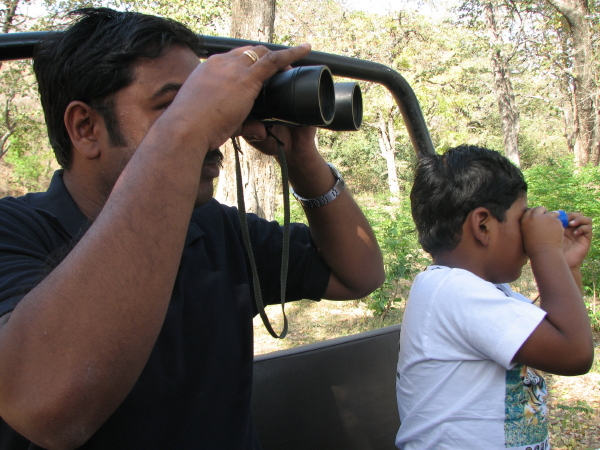 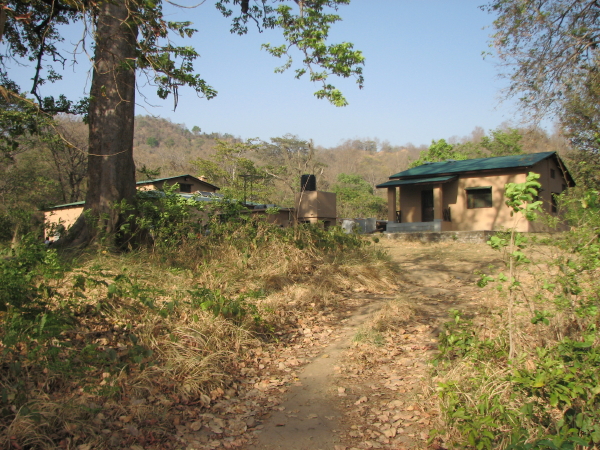 Forest Rest House at Jirna – one can stay here too!

The next day we joined the conducted tour to Dhikala Tourist zone. Again we were unlucky not to get the morning tour. Anyway the 1 hour drive to the Dhikala rest house was uneventful with a few deer, crocs and a Gharial being spotted. The fun started after lunch. The Ramganga reservoir is higher above the Dhikala rest house and as we approached it we saw a herd of wild elephants ambling along for a drink of water led by the majestic matriarch. Further ahead two more herds were making their way to the river. As we approached the herd in the middle the matriarch rushed to the herd waving her trunk. Immediately the male tuskers took up flank positions while the females formed a protective ring around the calves. It was a humbling site. The whole herd then retreated. We were not sure if this reaction was due to our presence or due to the presence of the other herds. 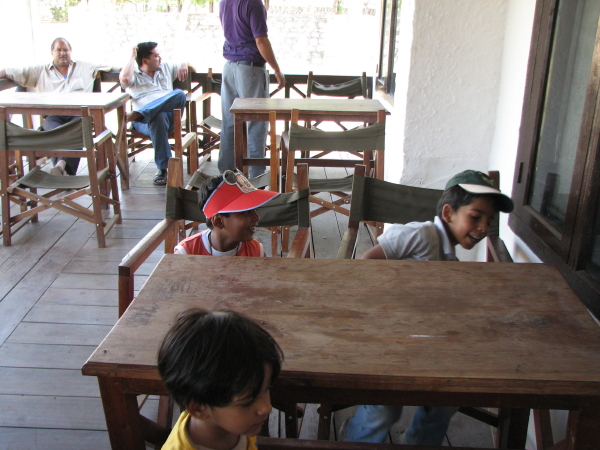 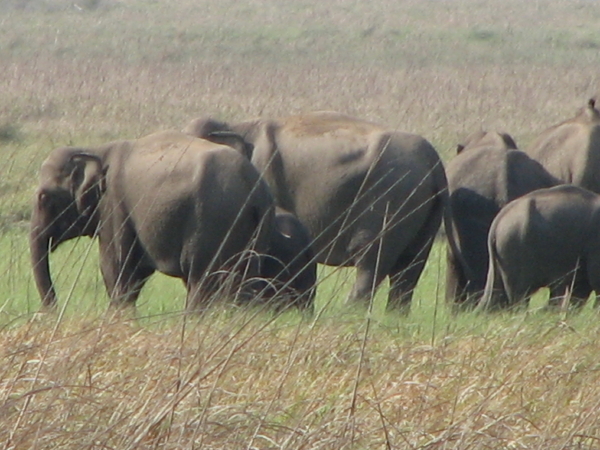 A herd of elephants 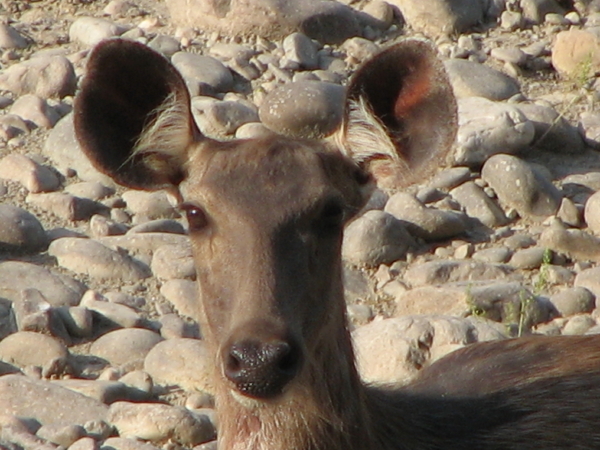 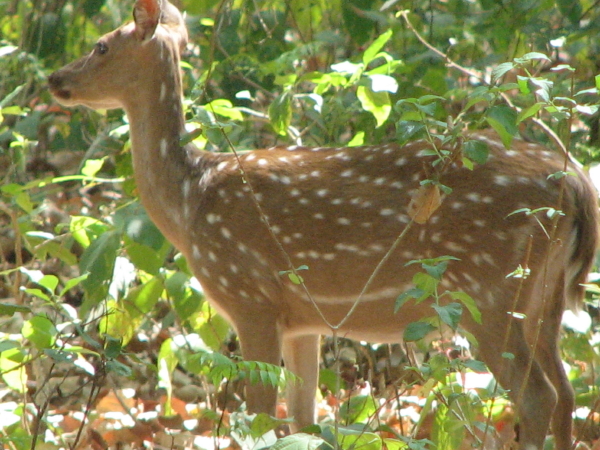 As we approached the edge of the Ramganga we had the rare opportunity of seeing three different herds of elephants approaching along the reservoir with the jungle in the background one behind the other. After a few minutes the van turned back. As we contemplated the majesty of these animals in the wild and rued the fact that we had missed the all elusive tiger, the van rounded a corner where two stationary gypsies were stationed with the occupants motionless and binoculars and cameras aimed across the river at a round yellow spot about a klick away. A flicker of emotion swept through the van and everyone surged towards the edge. Lo and behold there was our tiger. In their excitement everyone forgot to be silent until reminded with angry shushes from the occupants of the gypsies. With glee, photographs were taken and taken again just to be sure. We had got our prize. Satisfied, we made our way back to base. Paisa Vasool. 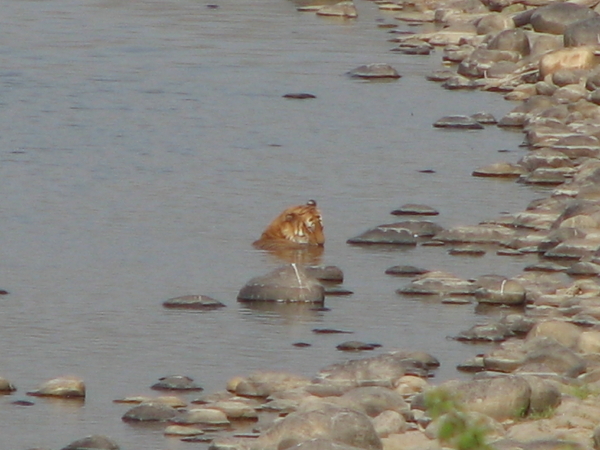 At last the Tiger

Corbett Falls and Kaladhungi
On the way down to Corbett is the Jim Corbett museum housed in Jim Corbett’s original house at Kaladhungi preserved for posterity. There’s some history to be seen there. There is a small shop selling t-Shirts, trinkets, books and other interesting stuff which can be purchased. Just a few metres on the left of the turn off to Ramanagar is the Corbett falls. It is preserved in all its natural glory with water all year through and calm and peaceful in the mornings (a bit crowded in the afternoons but not as crowded as other famous waterfalls). There’s an entry fee and a resort outside too. A bath on the falls does you wonders. 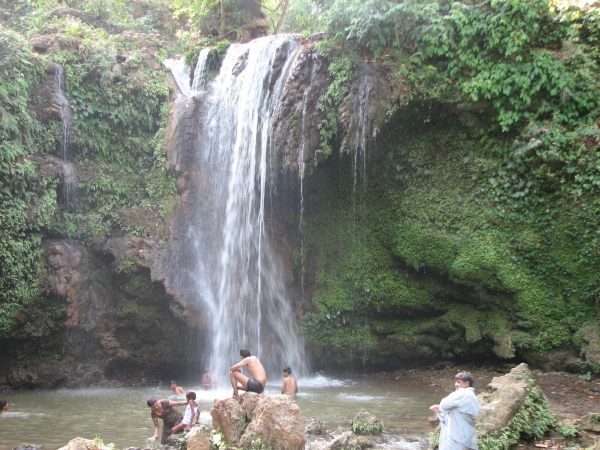 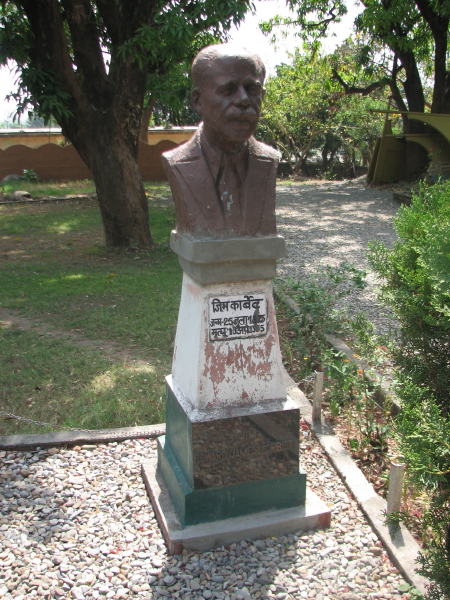 So that was about it. Hopefully you ghumakkars liked it.Corbett can seem like a complex place for the well meaning traveller – bookings, safaris etc. etc. Do catch my next post where corbett is simplified

While descending, I saw the River Shyok flowing at a distance. As I rode further, I came across the road widening into sandy plains long-drawn-out between the rows of mountains. I stopped and filled in the changing views – the river, the mountains, barren sandy plains on which the roads look like thin, dark lines drawn till horizon. Hereinafter came several small villages, where kids would waved at me, tempting me to given them a Hi-five! The mountains around me were full of gravel, which threatened to come down anytime! This was indeed one of the most unusual places on the planet!