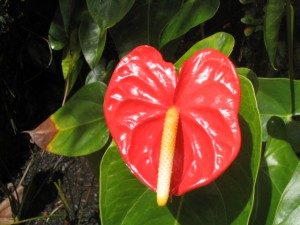 Our next stop was a black sand beach. Big Island is known for its black sand. Black igneous rock from the lava flow gets disintegrated into sand particles and forms these beaches. This beach was supposed to be a rest area for turtles. We went, spread our mat, and sat down on the beach. Immediately we saw turtles popping their heads out of the water. There were a few green turtles that came and slept on the beach. It was wonderful.

We reached the Hawaii Volcanoes National Park at 5:30 PM and started driving on the Chain of Craters road. On the way we saw old craters, fuming vents – proofs of past and current volcanic activity.

The Kilauea volcano in Hawaii has been erupting since 1983. It is not your typical volcano where there is a tall mountain and lava flows out through a crater on the top. Lava from the volcano travels several kilometers in lava tubes under the ground and pours into the ocean. We reached the volcano view point and immediately realized that we should have come an hour early. Cars were parked at least a mile away from the rangers office. The radio told us that lava was visible after a 2 mile walk from the office. After we reached the rangers office, we noticed that there was no road anymore. Lava from a few months back had closed a vast stretch of the road. The trail was marked, but most of the hike was boulder hopping!!

Lava on the Road

We keep walking on huge lava fields with the ocean on the right. We walked 1 mile when the trail ended. The ocean breeze kept us cool and we kept walking beyond the trail as were a few hundred people. After a while, we noticed that the ground below our feet became a little warm. The park ranger told us that we were walking on active Lava Tubes! There was a mountain there that was feeding this lava and it was transporting it through this lava tube into the ocean. We finally reached a place where hundreds of people were sitting on the rocks and watching something like they were in an amphitheater. This was it!! 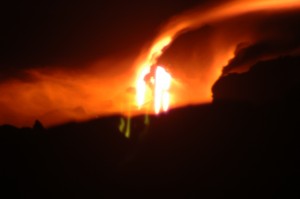 Lava flowing into the Ocean

After a 3-mile hike, we finally saw hot red lava flowing into the ocean in 3-4 channels. It was awesome. We were speechless. It was one of those incredible sights that you only get to see on the National Geographic Channel, except this was happening live in front of us. The sun had set and we saw the bright red lava and the red glowing smoke it was creating. 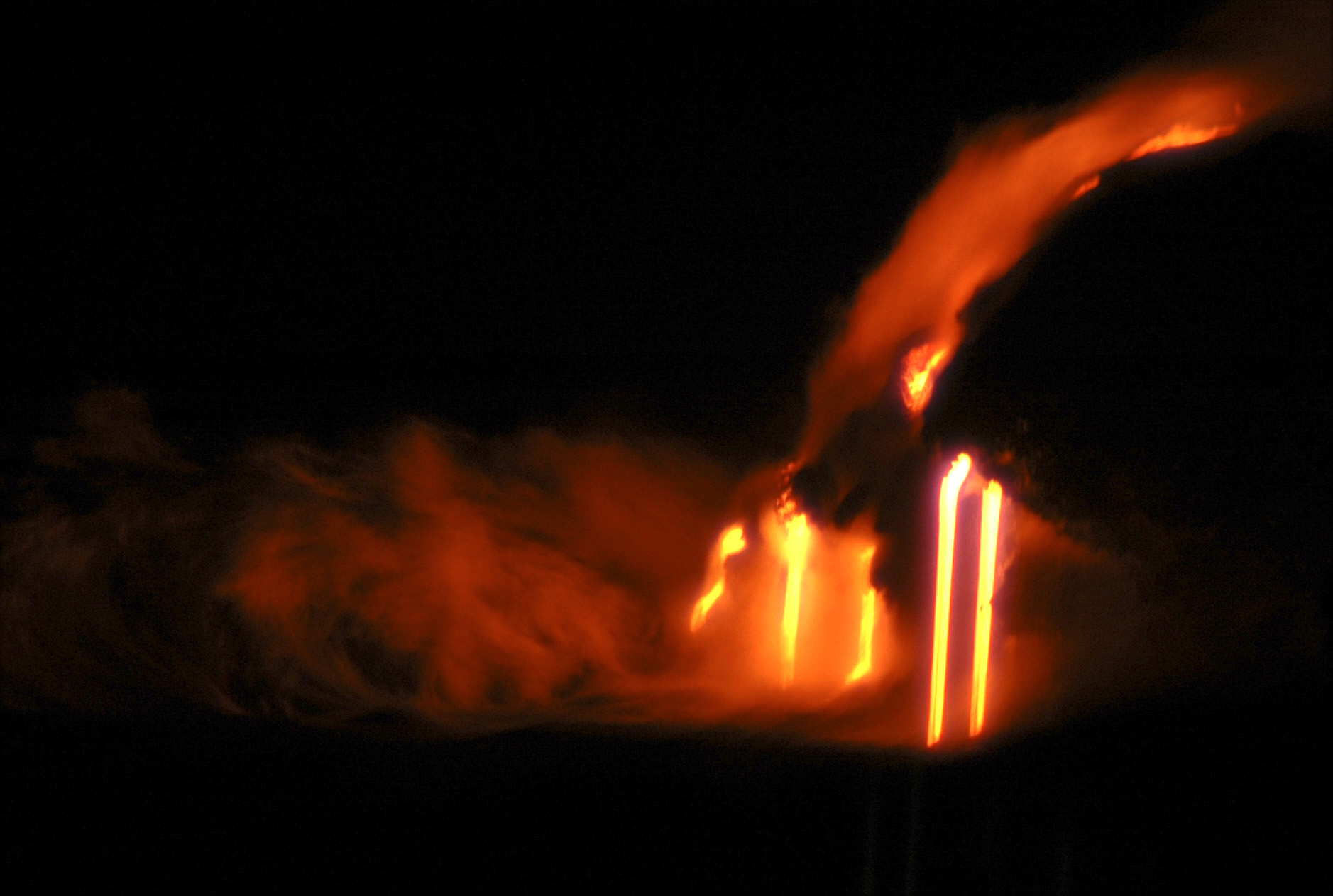 We spent over an hour there and turned back only when it started drizzling. Night had set it, but luckily for us it was a full moon day. Even otherwise we had come equipped with flashlights. The rest of the hike would have been lackluster except that in the mountains, another vent became active and lava started flowing out. What started as specks of light became a flow of at least mile lava flow by the time we got done. It was an amazing sight that would remain etched in our memories forever.

Amazing views of a Live Volcano was last modified: May 21st, 2022 by vamsee

After living in the US for over a decade, my husband and I moved back to Mumbai, India. I was bit by the travel bug shortly after I moved to the US. My trip map shows that I traveled to 85 cities in 18 countries. I was never a writer and in fact hated writing. One day when I was bored, I wrote my first trip report on Hawaii and it turned out to be OK, even mildly funny. Writing travelogues helped me improve my overall writing skills at work too, so I kept at it. Now I love writing trip reports. Sometimes when I am depressed, I get myself a cup of coffee and read an old travelogue. I immediately feel good. Apart from traveling and writing, I love planning trips. I have planned vacations for many friends. If you have any questions on where to travel in the US and Europe, feel free to ask me.

Z-point is about 8 kms from the guest house. You can take your vehicle upto Shanti Falls, which is 2 odd kms from the guest house. The rest of the journey to the Z-point has to be covered by foot. Make sure you have good shoes (Chappals are a strict no-no) as the path gets tougher and trickier as u ascend. Its also a good idea to do this trek early in the day when there is lot of light and remember, it gets dark in the hills sooner.:-)