This Sunday we ventured out for the first time during this monsoon season for a round trip of lakes, dams & hills around Pune. After a little research found that there is a circuitous route of around 130 kms which takes us through Temghar, Lavasa, Varasgaon, Panshet and Khadakvasla and then back to Pune. Temghar, Varasgaon, Panshet, Khadakvasla are known for dams and lakes formed behind them which supply water to Pune city. They all are situated in Sahayadri range of mountains as this part of Western Ghats is called in Maharashtra. This season rains have been very scarce till now in and around Pune. I could feel that by noticing that I have not been caught in rains since it started a month back while walking to & fro from the office. Newspaper carry reports of how there has been very less rains in catchment areas of these dams & lakes and there could be paucity of water if it doesn’t rain properly. We saw that first hand on this trip.

We started from home at around 9AM and had quick breakfast of Poha and Tea in an eatery close to our house. After that it was driving through Pune city for 20 odd kms to go to the other end of city to a place called “Chandni Chowk” from where roads criss-cross going to Bangalore, Mumbai, Mulsi (our direction) and back to Pune. The name is similar to “Chandni Chowk” in Delhi but similarity ends there. While on the road to “Mulshi” which is the biggest dam & lake around Pune, saw lot of youngsters on bikes going towards Mulshi / Tamhini ghat which are well known execursions. Tamhini ghat is end of Deccan plateau or Western ghats, gateway to Konkan region from Pune side. When monsoon is in its glory, there are waterfalls created in every crevice of the mountains where people bathe and make merry. We were going to skip that and go towards Temghar/Lavasa. Lavasa is a new township coming up on the hills around and on shore of Varasgaon lake which has elite residences, landscaping, educational and office space and is being highly promoted to attract investors. We decided to check it out as a side-effect to this trip. However, we were disappointed to see the township from a vantage point and later going around it. It seemed an eyesore from a distance with lot of finished and unfinished apartments, construction paraphernalia etc. I sometime wonder how clumsily we out this activity called “construction” even it is for a world class elite township. Having been just back from Seattle where entire city is developed around lakes, I had another picture in mind. Hopefully after finishing the township will live up to its hype. 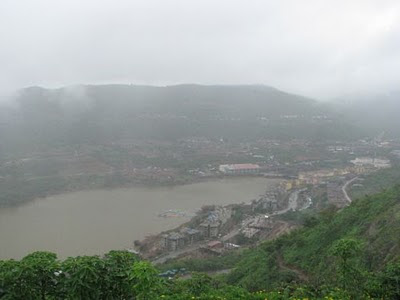 For coming to Lavasa we had taken a left turn on Mulshi road to ride on “Temghar-Lavasa road”. It was a nice drive thanks to good road which approaches this elite township. There were a couple of small ghats on this road which were full of great views. Best was clouds & mist shrouding the long & high and of hills like an amphitheatre then a gentle slope covered with trees into the valley with neat rectangular fields which are bare brown or sown with paddy. Then a temple cone rising above the houses. It was a sight to behold. 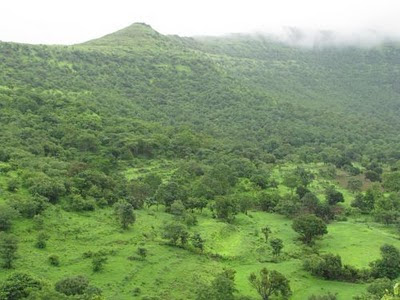 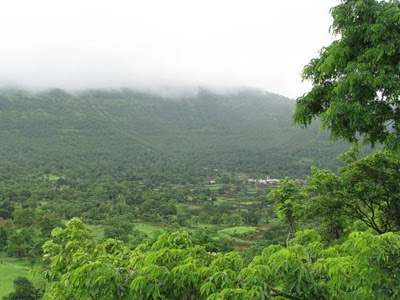 We stopped at Temghar dam but found it to be virtually empty. There was only a “chullu bhar paani” if I could use that metaphor for a dam. Though it was cloudy and inclement weather but rain was only spotty. 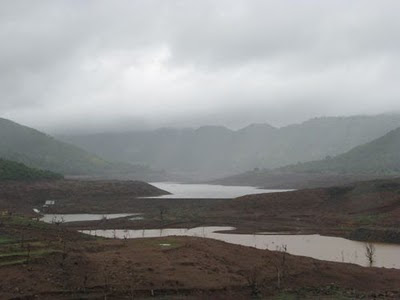 After Lavasa we took the road which very few people take to go to Panshet via Varasgaon. We asked a group of bikers about condition of road which they described as not good. We anyways went on it just to complete our circle and take things as they come. The road was indeed bad but there was virtually nobody on the road only occasional bike or car. There were sparse villages with no business on the road. The road hugs the lake formed by Varasgaon dam. However again there was not much water in the lake. One could clearly make out the green line up to which dam must be getting full. The water was more like a small river. 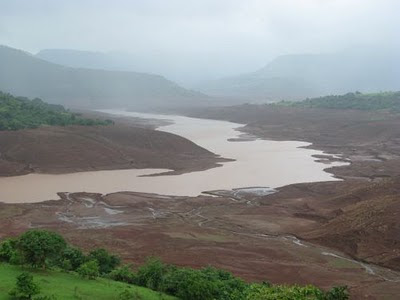 The greenery around more than made up for it. We stopped on many occasions to admire the beauty around. 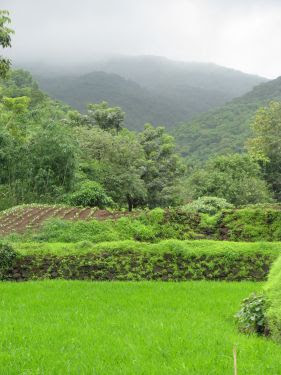 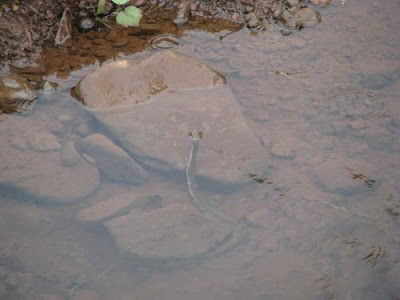 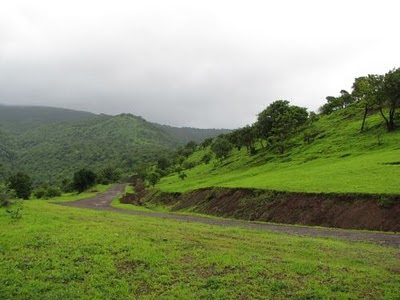 At one point we stopped for a small “Tila” which was carpeted by grass and there were some white flowers on it. We hiked up and it turned into a small plateau like “Bugyal” as it is called in Garhwal. It was as if we discovered a hidden treasure. The moist breeze, surrounded by hills and mood made us revel at this place. 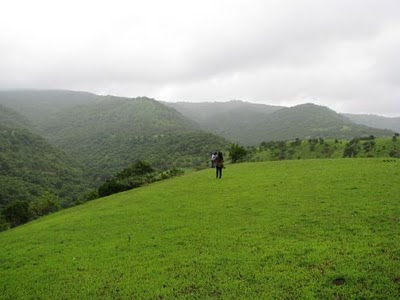 Due to remoteness of this route, there was no eatery and we were left hungry nibbling at whatever snack we carried from home.

We reached Panshet where we noticed people who have come down to visit Panshet and around from Pune. Panshet dam and lake shore was not accessible due to a recent accident of couple of youngsters drowning while boating. So we hurried from there. The river which was coming out of Panshet dam was now meandering along with the road. At one place, one of the resorts around this place had cleared some space on the banks of river and created a small park with benches where one could sit and admire the river and hills beyond. It was nice to sit around leisurely over there. 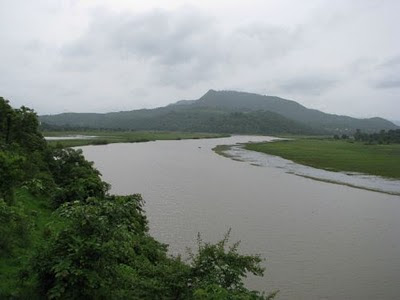 After that we proceeded to Khadakvasla. This place is the outskirts of Pune and is famous for home to NDA (National Defence Academy). We reached there at around 5 PM and it was heavily crowded. All the Sunday evening rush had gathered there. Because of lack of proper parking facility had to painfully look for a parking place. Sweet corn vendors were doing brisk business. Thankfully, this lake was quite full with water and there were waves due to breeze. We stood in water for sometime but left soon without waiting for the sunset. 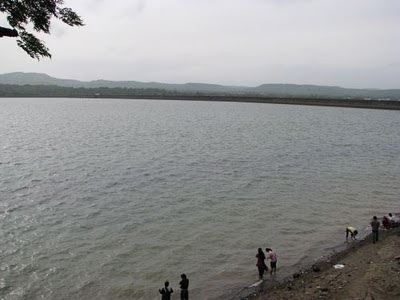 After Khadakvasla it was just a monotonous drive back home cutting across Pune city. Pune city is blessed in the sense there are plenty of places with natural beauty around it which are in their full glory in monsoon. You go 20 kms out and you have green carpeted hills and mist and you are in the midst of nature. Hopefully the rains would improve and make the scenes around rich and fill up dams & lakes to see us through next year.

We took a cab from Pathankot to McLeodganj. The cab journey took only 2 hours. The scenery was beautiful and the cab driver told us about the landslide that recently happened in Himachal. As we entered McLeodganj, a typical Himachal traffic jam welcomed us.