Give peace a chance !

This very famous hippy quote made me to search more and more about the hippy culture. I watched a documentary ‘Last Hippy Standing’ and finally decided to spend a few days in Kasol. I have been to the place once before, with my friends. But that was on bikes and we spent only a night in Kasol. This time i planned to stay there for atleast 4 days and same number of nights. After going through many blogs, I decided to stay at Alpine Guest House owned by Sanjay Mukherjee. The companion would be none other than Munish Bhya (who accompanied me to ‘Trip to Mussoorie and Landour‘. as well).

I booked the tickets online, of an HRTC (Himachal Roadways) Tata AC Bus up till Bhuntar. We boarded the bus from Chandigarh at about 8:30pm on 15th December, 2009. I was wondering about the difference between Tata AC and Volvo. I didnt find much. Bus started rolling on NH-21 through the small towns of Punjab viz Kharar, Kurali, Ropar etc. Soon we found that the bus is full of couples going to Manali (as the final destination of the bus was Manali). Some of them were listening Kumar Sanu numbers on their Smartphones. We realized the irony that in search of Hippies, as we left for, we are travelling on a wave of matrimonial romance all around. Munish bhya slept for a few hours and I kept on gazing on the darkness of the hills, sparsely illuminated with domestic lights. Distinction between earth and sky was getting difficult. The bus halted at a ‘dhaba’ near Sundernagar. It was chilling outside, we warmed ourselves with coffee. We got off the bus at Bhuntar at about 4:30 AM.

Ready to take off

A Maruti 800 (yes, in HP they employ Maruti 800 as taxi) with a driver, was standing at the Bus Stop. We hired him till Kasol for Rs.600/-. He drove as if he was hastier to see Kasol than us. Everybody in the Parvati Valley (the region is known as Parvati valley) knows about Alpine Guest House. I knew that most of the cafes in Kasol would be closed as December is an off-season month there. Most of the Hippies go to Goa in December, so there are not many customers for the Cafes as well as guest houses. Anyhow we got a room at Alpine Guest house, just at the bank of the river Parvati for Rs.400/- per day. It was a spacious room with a lots of windows and a continuous hush of the river was audible 24 hrs. We called each other Good Morning and slept !

We got up at around 11 and left to stroll in the beautiful town. To my good luck, the restaurant named Little Italy was open. We had a pizza along with some coffee, the pizza (keeping in mind the price) has to be rated 5/5. We didn’t mind passing the day by roaming and relaxing here and there in the village as we have two more days to our disposal. We had lunch at Little Italy only. The Indian Thali at Little Italy was not that impressive. We got some Doughnuts with chocolate packed. Doughnuts seemed like westernized version of ‘gulgule’ (the stuff made by deep frying jaggery with wheat flour). Anyhow we slept contently at night after having some sandwiches at Little Italy (Indian food is not worth a dinner). We also found out that theres no ATM in Kasol, nearest one being in Bhuntar. 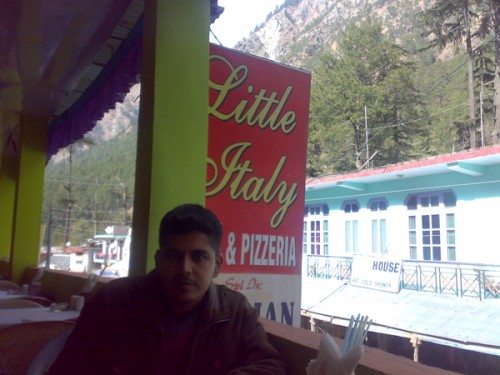 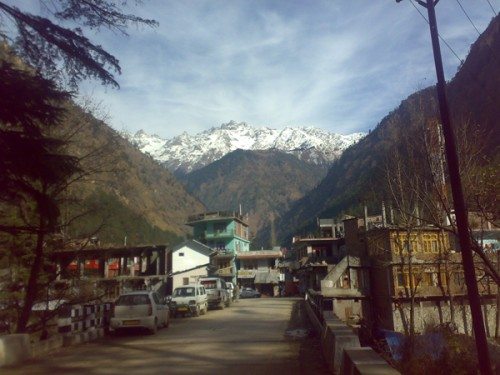 The next morning we got up late again. Had a Pizza at Little Italy and decided to leave for Manikaran Sahib. It is about 4 km from Kasol. Instead of walking on road, we sauntered along side the river which ran parallel to the road, though a few meters below. The thought of igniting a bonfire struck my mind. I don’t know whether the problem was in leaves or in air, but the thought remained a thought. The riverside walk was becoming tougher so we decided to move back to the road. Eventually we reached Manikaran. It was as enchanting as anything. Gurudwara is beautiful, Langar (Kadhi Chawal) was good. Above all the Shiv ji’s dark idol was sublime and the hot water geysers magical. After experiencing what i would call a shear bliss, we got back to Kasol. We met a backpacker on our way back (probably a hippie). He was alone and seemed so happy. I wondered what he is up to. But as they say only happiness matters in the end. I felt good for him. We went to Little Italy and decided to have a Green Olive Pizza. An old white man was sitting there, he was continuously smoking ‘beedis’. He was even cutting apart the smoking side of the beedi to make it shorter. 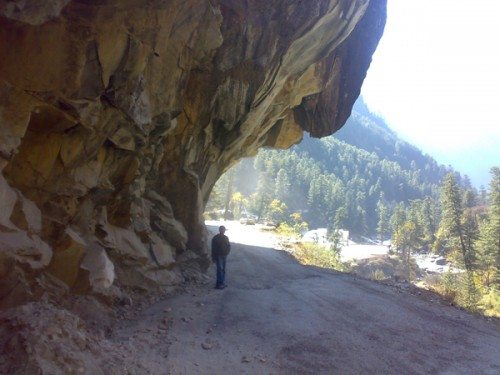 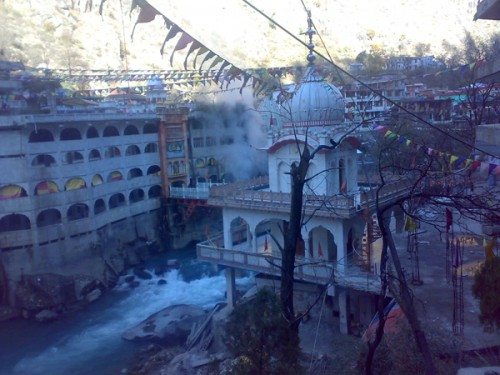 A nice view of the Gurudwara

Finally, on to the last day of the trip. After having some sandwiches in the morning, we went back to Alpine and went downstairs from its veranda, to the river. We saw a suspension bridge down about 200 meters and went along to check it out. It was a wooden bridge. Scary but beautiful. We crossed the bridge and reached the other side of the bridge and started walking along the hill towards alpine side. After going a little up hill on we found a small cafe kinda thing. It was not covered (no roof), just a few chairs and a hut along side as kitchen. A guy (seemed inebriated) started offering us ‘marijuana’ and stories. I felt very insecure because I felt that I am in a place where no one knows me and was carrying the camcorder as well. So we left the place in a hurry. After having some chocolates in the evening, I felt like staying on for one more day. But Sanjay Mukherjee (the owner of Alpine) told us that they are leaving for Kolkata tomorrow. And we need to vacate the room early in the morning (6:00 AM ! ! ! !). Went to Little Italy again at 9:30pm and watched India-SriLanka ODI while grabbing Pizzas. The Beedi waala old man was still there, smoking beedis one after the another. We decided to leave tomorrow. 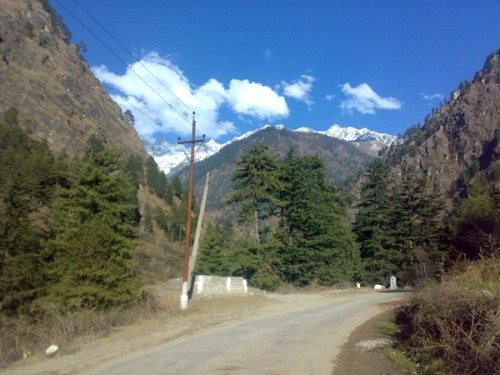 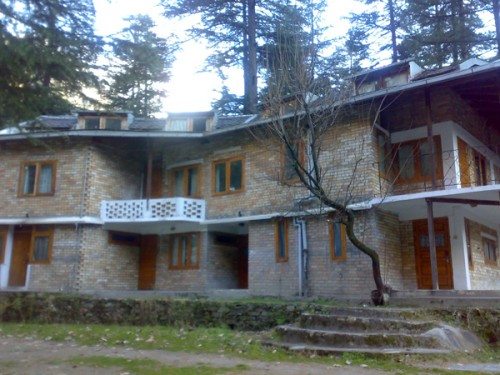 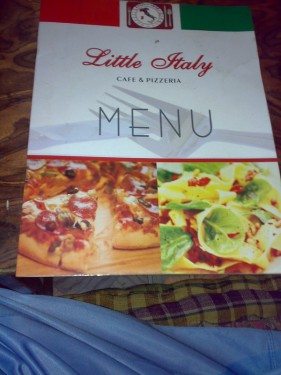 River Parvati in the background !

The \’Scary but Beautiful\’ wooden bridge !

I got up, the next morning, at 5:00 AM but the Mukherjees got up at 8:00 AM. So we left at 8:30 AM. Waited for the mini bus to Bhuntar at Kasol bus stop. I noticed some school going pahari girls playing a game. They made something by tying many rubber bands together. They were sustaining that thing with kicks, one girl at a time, and counting the number of kicks. It was amazing, how skillfully, they were kicking. They seemed very happy. A bus came after about 20 mins. It got full of School going kids. They were all so beautiful. The conductor was behaving very affectionately with them. In spite of the tyranny of going to school in the chilling cold, they all appeared very happy. I was astonished by the levels of happiness engulfed in the remote part of our country. Thats the reason its called ‘Incredible India’. The bus took a break at Zari. I read a poster there about a missing backpacker. His name was Hoshua and Nationality US/Israel. He was wearing the back pack in the picture as well. Bus dropped us at Bhuntar, from where we boarded an HRTC bus to Chandigarh. The conductor, although polite, was too talkative. It was a tyring journey of about 8 hours with a long break at Mandi Bus Stand.

I am hereby attaching a small video, I compiled out of the whole trip.

In search of some trance: Kasol was last modified: January 1st, 2020 by Vikas Kapil