Day 4: Exploring the island of Oahu.

Day 4 was a conducted bus tour by the Polynesian Adventure Tours booked through www.gotobus.com. This was to ensure there was no tension of getting lost, and no hassles of finding bus routes. We started with a brief visit to the Hanauma Bay (this was our 2nd visit during the trip). While leaving Hanauma Bay, I spotted something (of not much significance though) that I had last studied in grade 9th Biology. There roots were called prop roots, a kind of root that arises from the stem and penetrates the soil. Just some inconsequential observation.

Our second visit to the Hanauma Bay

Amongst all the islands, Oahu is the most populous. We saw a drastic change in weather as we traveled away from the coast. While the coasts are more bright and sunny with beaches and all, the weather gets cloudy and rainy (with more mountains) as you go away from the coast.

Next we stopped by the Makapu’u Beach, the Sandy Beach, and the Blowhole. If you look at a map, all of them come one after the other, and in fact, every beach looks different than the other. I wouldn’t have believed this if I had not seen it for myself. However after a while, I lost count of the beaches. 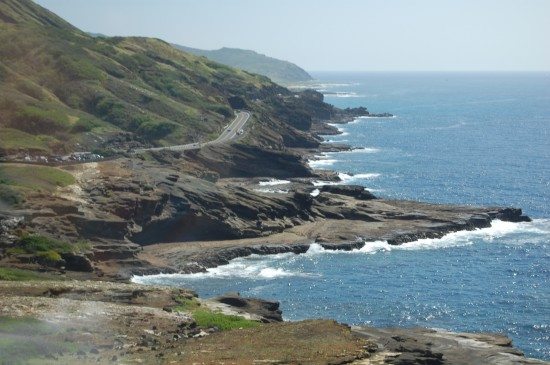 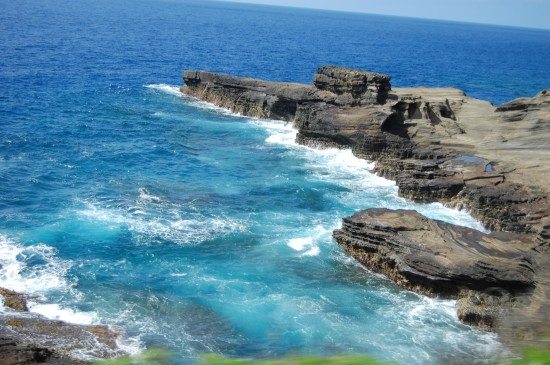 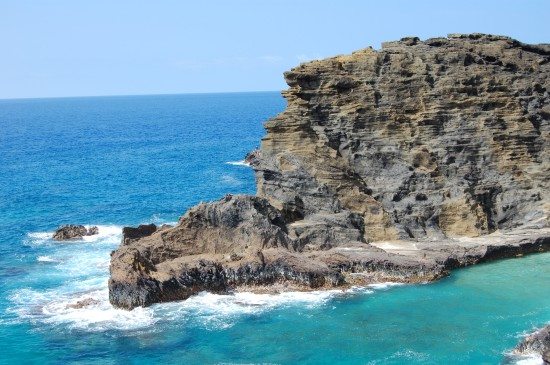 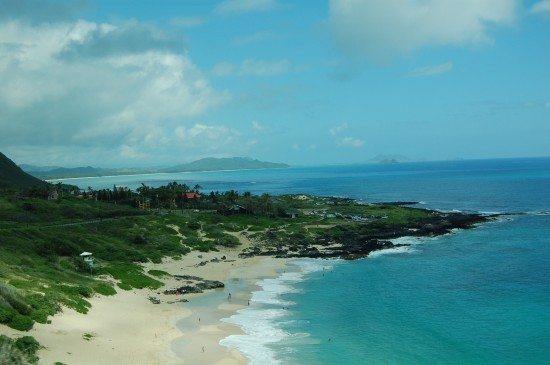 BTW, do check out the Sea Life Park and the Makapu’u Point lighthouse if you are in the area.

The Nu’uanu Pali lookout was where we went next, giving us an awesome panoramic view of Oahu’s windward side. From a sunny morning, the weather had turned cloudy and drizzly as we drove away from the coasts and gained elevation. 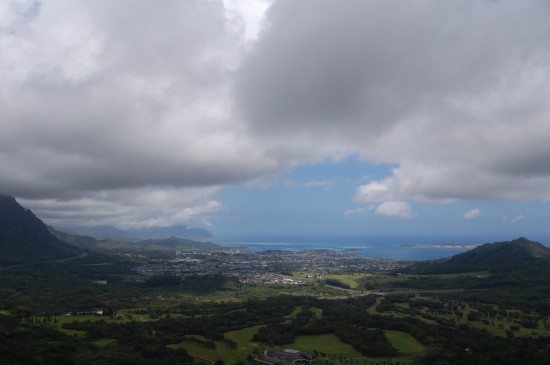 Our next stop was the Byodo-In Temple. Inside the temple is a 9 foot high wooden Lotus Buddha. The place looked like a Japanese Garden with koi ponds with orange koi fish surrounding the temple. It was an amazing place. 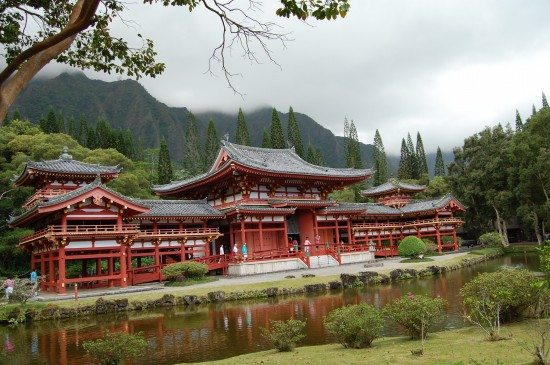 We saw some amazing and very colorful flora and fauna during our trip. 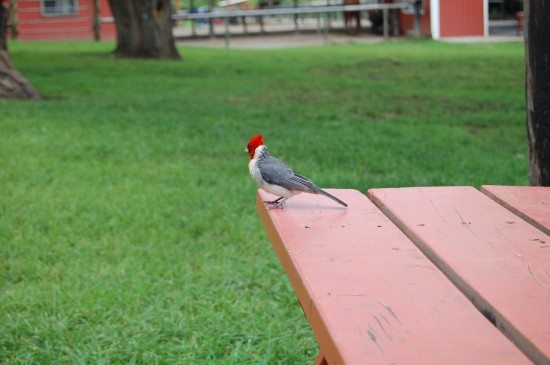 A little bird posing for us 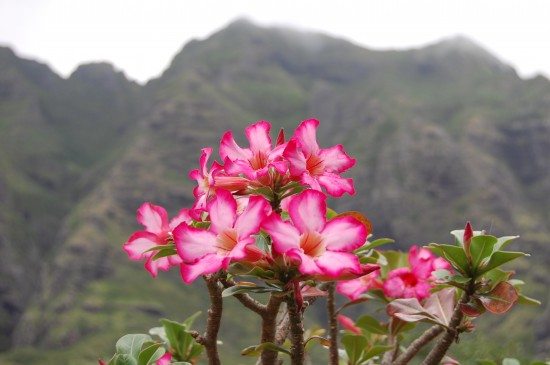 Our next destination was the Kualoa Ranch where we stopped for lunch. We lazed around in the area, checking out all the animals. Post lunch, food coma had hit us and I had soon lost track of all the information the tour guide gave us about the ranch. All that I faintly remember him mentioning was movies like Jurassic Park, Lost, Godzilla, and Pearl Harbor was shot here. I didn’t have lunch at the ranch by the way. Right before we entered the ranch, our bus stopped briefly for a restroom break. I was thrilled to spot a guy selling green coconuts for $5 each. I hadn’t had a coconut ever since 2006, and I instantly decided to skip lunch and have 2 green coconuts instead. It was the best decision made that day.

Post-lunch, in our comatose state, we drove further, passing by the Chinaman’s Hat island (because of its shape). 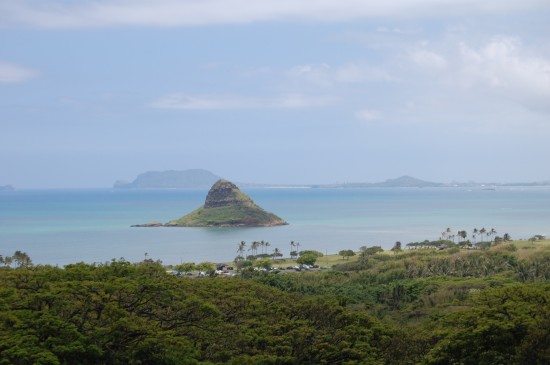 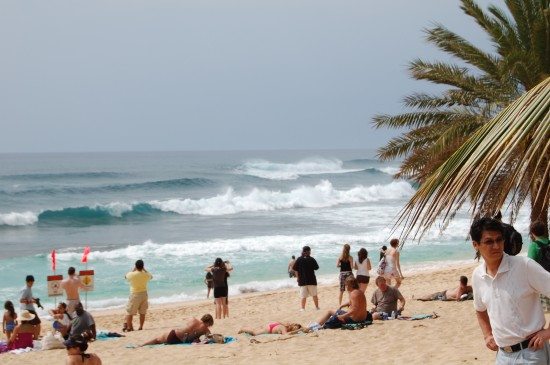 We next reached the Dole Plantation, a favorite place of mine to explore because I love pineapples. Authentic Hawaiian grown pineapples are grown there and then are exported to a large number of countries. We were told how pineapples are harvested, and we later checked out the food shops that store everything from ice cream to yoghurt with pineapple in it. 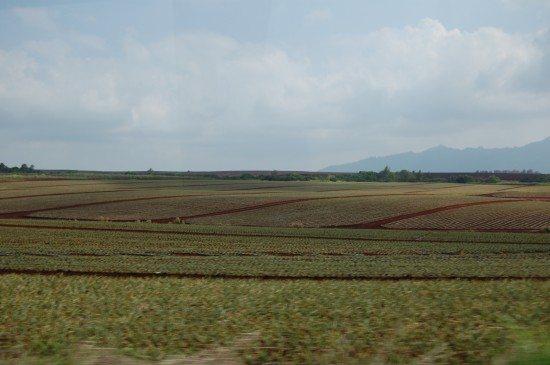 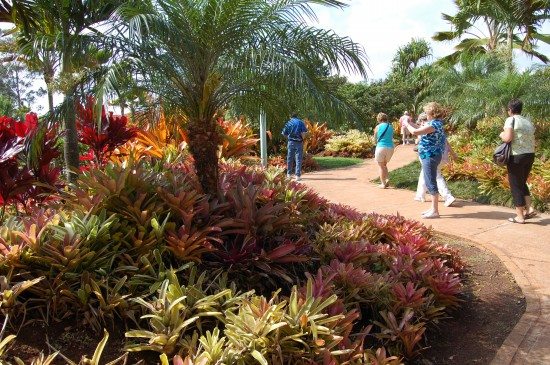 It was evening by the time we were done. Beaches, lookouts, ranches, islands, temples, plantation fields, we had explored it all that day. We decided to catch a quiet sunset by the Waikiki Beach and take a walk. 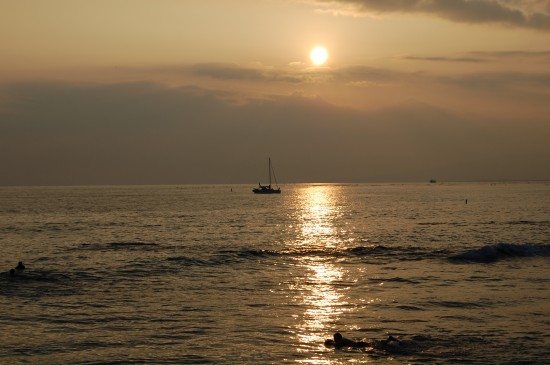 And the moon shone

While strolling, we found this Natatorium named “The War Memorial”. We had obviously not done our homework well, for I had never heard of this place before. It is quite close to the Waikiki Beach, towards the Diamond Head Crater and the Aquarium. Had it been open, we would have checked it out.

So that was the end of day 4, a hectic one with a quiet evening spent lazing around the Waikiki Beach area. The following evening we were scheduled to leave for Seattle. That left us with another half a day of exploring Oahu.

It was time to head back to civilization that evening, but by day 5, we were totally head over heels in love with Hawaii. We had the morning to ourselves and decided to go beach bathing. We soaked ourselves in the sand and water for hours, as lazy as cows and hippos (not a great comparison I admit). It was a very relaxing morning. The sun bathing got us very hungry and we grabbed a subway sandwich, deciding to pick a few of our favorite locations and spending a leisurely noon/afternoon there. We found 3 collinear beaches, meaning you could take a bus and go to beach 3, come back to beach 2, beach 1, and finally the hostel taking the same bus in the opposite direction. The buses were scheduled an hour apart, which gave us sufficient time to explore all 3 beaches (Makapu’u Beach, Sandy Beach, and Hanauma Bay). It was our third visit to Hanauma Bay, but we could still not get enough of it. 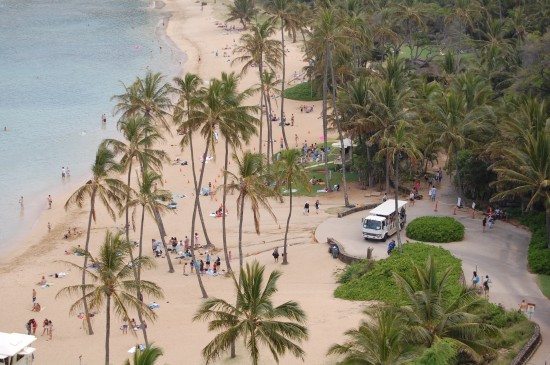 Hanauma Bay on day 5 for the third time 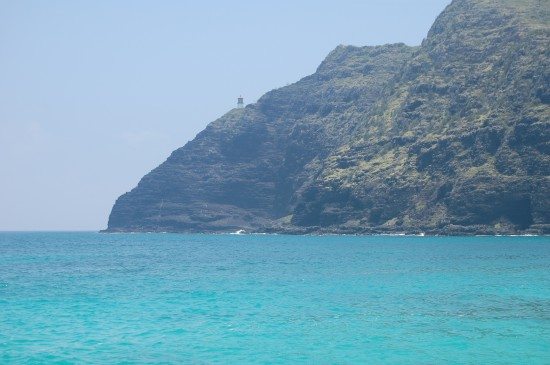 Makapu'u Point Lighthouse at a distance 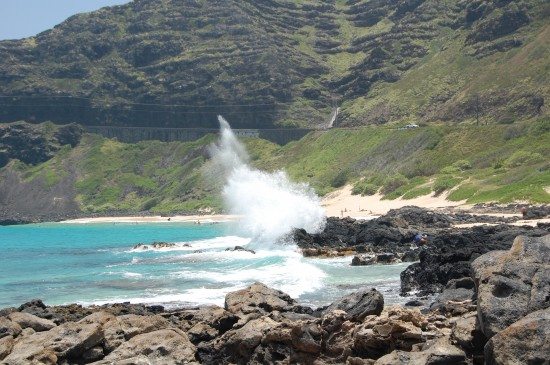 Waves at the Makapu'u Beach

Don't you think the island at a distance looks like a dog's skull? 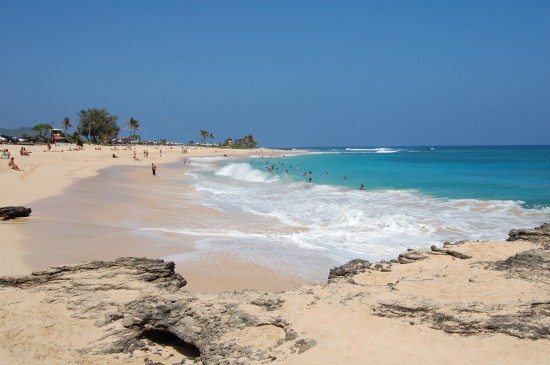 By evening, it was time to pack and leave. The shuttle dropped us to the airport. Needless to say, it had been an awesome vacation, even with no car, no inter-island hopping, no scuba diving, no water activities, and living in hostels.

PS: It is not uncommon to be approached by strangers in Hawaii (I myself was approached a couple of times). However a friendly but firm “No” works).