India is vast, and it has everything in abundance and variety, be it nature, history, monuments or be it sheer people power!

And in this vast land, there are glamorous cities with impressive skyline, rich places to shop and aromatic places to enjoy and relax; there are majestic monuments of bygone era, whiff of prayer flowers in the premise of age old temple bustling with devotees and many more things along with an aura of importance!
And then there are tiny towns which are nothing but ordinary! May be a legendary water body or presence of divine or just the crisp fresh air from Mother Nature but all this making them very visible on tourist radar!

But then there are still some places devoid of any such popularity. They are dusty and crowded, small town cities or overgrown towns, just functional, carrying on with their day, struggling in their own world! But somewhere something lures you from the pages of old guidebooks and forgotten stories, and there you go !
This is how we landed in Gwalior… only to realize later, how unprepared we were as grandeur of Gwalior unfolded in front of our eyes one by one. 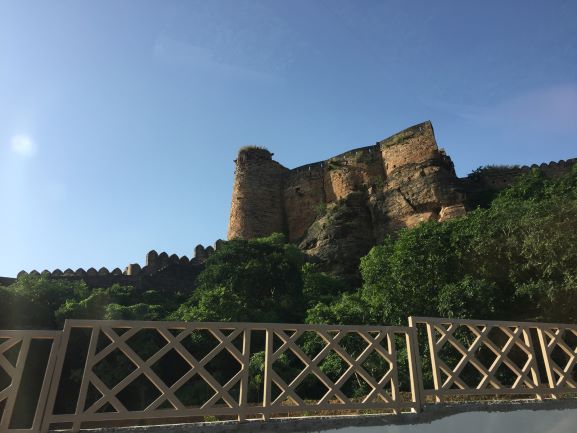 Gwalior is almost the midpoint of the vast north Indian plains. The slightly hilly fertile land of Bundelkhand , watered by the great Chambal is like the first gateway to Delhi while coming from Deccan plateau. The area around Gwalior is rich in history. This country was part of Chedi desh mentioned in Mahabharat. And is also part of 16 Mahajanpad in known history. The northern slopes of Vindhya come closer to the eastern cliffs of ancient Aravali in this region. Several towns, obscure villages and remotest of the places are now on the ever-evolving heritage map, thanks to the piece of faith preserved in their hearts in the form of an elegant temple, a fallen wall or a sculpted to perfection stone art! 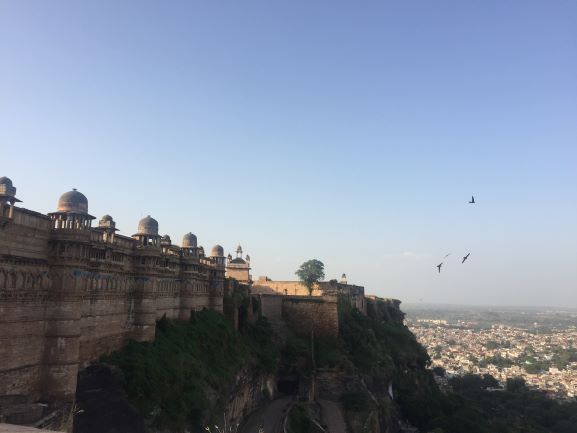 Gwalior is characterized primarily by the majestic fort guarding the plains around. The Gwalior city has snuggled close to the fort from all sides. Sharp cliffs of brick red sandstone now withered and blackened in extreme climate of central India are visible from anywhere in the city.

Earlier known as Gopachal, this solid rock is conquered, adorned and cherished by various royal dynasties for almost for 2 millennia.
The first fleeting references appear when Hun king Mihirkul lost this fort to the rising powers of Gurjar-Pratihar at the start of sixth century. There is a reference to a sun temple built on the fort which is now lost in time. Gurjar Pratihar although operating from Kannauj, accorded necessary importance to this key location in central country. Several temples and inscriptions are attributed to them and their successors, Kachchhapaghata rulers who followed them with an equally long inning extending up to 12’Th century. 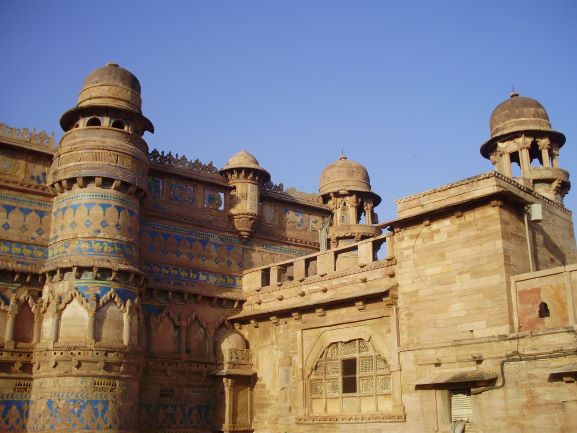 The winding steep road leads to the tourist entrance gate of the Gwalior fort. A few steps and the ornate bastions, intricately carved with peacock blue, looking splendid on the almond coloured stone structure give a very impressive opening. The blue sky accentuated by a mile-long wall of this ‘pearl in the necklace’ is a sight to behold!

The beautiful palace that we see today is built by Mansingh Tomar , the lion king of Tomar dynasty in 16’th century. Lavishly carved interior in marble and sandstone, the ‘jali zaronkha’ or carved windows, the tiny artistic galleries and several halls! The opulence is visible!

The medieval palaces built by Tomars in 15’the century and later by Mughals occupy the entire north eastern wall of this gigantic fort. The blue and green patterned tiles on the outer walls have become the trademark of Gwaliar fort. This tile making and their use in construction is an art form we have almost forgotten. Further to the north as you walk past several royal buildings, their domes reaching the sky and minarets soaring up with richly carved balconies along with ornate door frames, all befitting the brave kings and queens of those times. 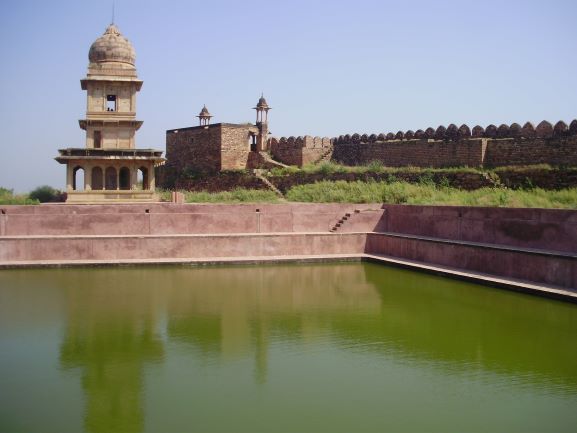 Just round the corner is a big water tank, now solemn and calm, reflecting on the past stories… This was the place where princess Karnika bravely entered the flames of fire along with the queen, sacrificed her life as the king Malayvarman and his soldiers opened the gates of the fort for one final retaliation! Giving up life to the fire in order to protect the women from brutality and mutilation from invading barbaric armies of Delhi Sultan Iltumsh, Karnika along with 1300 other women committed Jauhar and King chose the battle knowing well that the defeat is imminent. Such courage and conviction, no wonder Rajput men and women are precisely famous for this same commitment to duties, faith and Dharma!

An antidote to this saddening and angering tale is to look around and see the tender love story between of Mansingh Tomar and his Mriganayani Gujari Raani blooming in the wilderness around fort. This enchanting tale of the noble king and his artist archer queen is part of popular folklore.

While we admire their saga of love, bravery and devotion, we need to travel back in time, a few centuries precisely to see some of the greatest architectural works in form of temples, still standing and some exciting discoveries too. 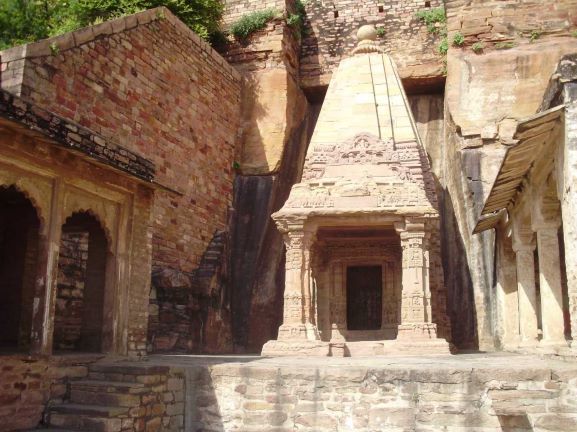 As we walked down the huge ornate gate on a spacious pathway in blazing mid-morning sun, the impressive fort wall towered above giving some soothing shadow. One more turn, and we were facing an ancient wonder. Built in 876 AD, this temple is dedicated to Chaturbhuj Vishnu, the one with four arms. Fully carved in single stone, monolithic in nature with a simple pillared veranda and inner sanctum, the temple is small. However, the real treasure is hidden on an inscription carved on the inside wall. The first occurrence of number zero in inscriptions found in Indian subcontinent is here on this tablet on the wall. The inscription tells us that it was in year 933 of Shaka Era, in the bright half of month of Magha, someone named Alla has built the temple and assigned this village for 50 flower garlands to be supplied to the temple daily.
The inside was dark, and it was difficult to actually see the inscription and more difficult to find a zero in it. But this discovery has put forward the fact that decimal number system was well established and very much in practice and part of day to day culture of people in the region. 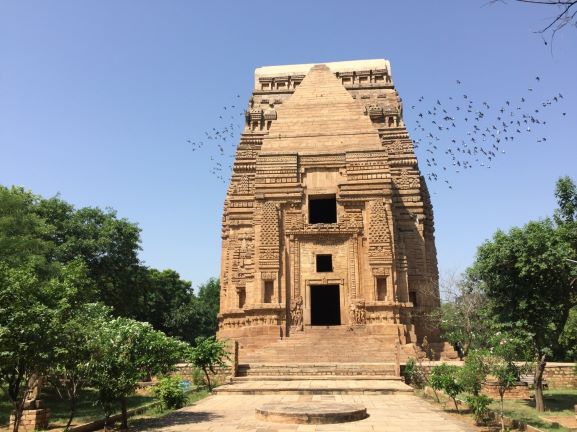 Back in the fort, on the western frontier stands a real gem blocking even the sun by its astounding height. Standing tall at 100 feet this exquisite temple known as ‘Teli ka mandir’ is a unique piece of architecture. The shikhar is upsidal or Vallabhi style, seen many times in southern temples. The carved celestial beings on the doorframe and beautifully carved temple miniatures on the walls zooming upward will stun you with their elegance and grandeur. Built in 8’Th or 9’Th century, the credit is either to Yashovarman, the Gurjar Pratihar ruler or to Mihirbhoj. The inscription found in the temple is dedicated to multi armed goddess. Hence experts infer that this temple with unique architectural style could have belonged to Sapta Matrika or some form of goddess.

On the eastern cliff stand the twin temples of Sahastra Bahu, the Vishnu. The smaller one further to the east, now glitters in setting sunrays of golden hue. The larger one stands tall at 80 feet. Intricately carved with sculptures, both the temples date back to 11’th century and must have been constructed during Kachchhapaghata rule. This Sahastra Bahu has colloquially become ‘Saas Bahu’ temple and this name is now prevalent. However, it is a massive structure dedicated to Vishnu, a thousand armed one! Interestingly there is one more temple of SahastraBahu Vishnu and it is also known as Saas-Bahu temple. It is also notable that these are always set of two temples, be it on the banks of Banas in Nagda, Rajasthan or in central country of Gopachal!

Unfortunately ‘Teli ka Mandir’ and ‘Saas-Bahu’ temple, both these majestic temples are ‘monuments’ !
How tranquil it would be to hear the entrance bell ringing melodically, to breath in the combined fragrance of flowers and oil lamps and incense sticks, to see the hustle bustle of devoted feet and folded hands, and to submit to the rhythm of ancient chants echoing from the corridors!
But instead what you experience is a dead silence, occasional flutter of bats, almost empty courtyard and the uneasy peace settled over the whole area.. The dusk descended heavily on the tall pinnacle of temple, the Fort quietly gathered back the strewn memories of past and held it close to the heart, to unfold them again tomorrow for new set of listeners..
The saving grace was the soothing sound of Gurubani from the nearby Gurudwara ! 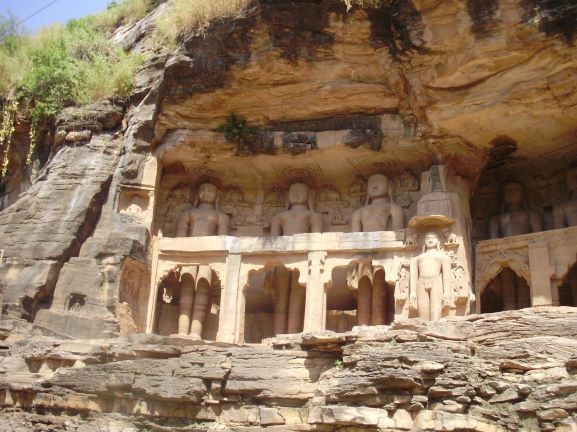 Coming down the royal fort, your eyes are captivated by huge sculpted Mahavir idols. Carved in larger than life perspectives these massive sculptures came into being during Gurjar-Pratihar times.

The evening rays illuminating these carvings linger in your mind for a long time to come, memory is cherished, the flame rekindled..

Shivam is very much fond of bathing in River and sea so he started taking off his cloths and I was also excited to take a holy dip as soon as possible, so without wasting time we both put our first step in the pond, since it was hot that time so we felt this bath pleasant.