The giant blue-white backdrop had always been there. But we had no inkling. Cocooned, as we were, by fog, intermittent cold showers and a tattered blanket of rain bearing clouds the nearest thing we could see were the dark outline of the hills across the small valley. And so when it made its majestic presence felt on a cold but clear morning I could do nothing but stand and stare. Framed by the window of our room the snowy peaks of the Dauladhar range of the Himalayas, though some distance away, stood impossibly tall. At that moment I realized that the arduous journey to this quaint little village of Shoja was worth it.

The drive from Chandigarh took more than ten hours as we surfed over waves of hills and meandered through a host of small towns and hamlets that sprung up quite frequently on both sides of the road. Even small tea shops and dhabas (providing unpretentious but surprisingly delicious basic fare of roti, dhal, sabji and chawal) commanded stunning views of the surrounding mountains. Fast flowing grey waters of river Sutlej kept company for most part of the journey as we climbed higher up through narrow roads bordered by precipitous fall on one side and rubble deposited by fresh landslides on the other. Finally, when we reached our destination it was pitch dark, cold and the only sound that we heard were the incessant bark of village dogs.

The village of Shoja is located a few kilometers down Jalori pass (more than 3000 meters above sea level) in Seraj valley of Himachal Pradesh and remains relatively undisturbed as it is a little away from the well-tread tourist tracks leading to Shimla or Kullu. A cluster of wooden houses perched precariously on steep slopes may not sound like an ideal tourist destination but trekking through this land clad in coniferous forests brings to mind quite strongly what holidays in the hills should be all about; bird calls, rough-cut paths, chill weather and not many humans (and the ubiquitous plastic litter that tags along) in sight! This place offers just that. And of course lots of opportunities to trek. For someone who is used to just a stroll on the terrace during hot summer nights in Chennai I was rather hesitant to venture out on any heavy duty trekking. However, our guide promised us that the gradient would not be challenging and as a starter led us through a three hour walk through a pine forest.

Armed with staves and hiking boots the trek was pleasant work. The coniferous trees according to our guide, although they all looked the same to me, present a wide diversity; spruce, blue-pine, fir, yew. Though leopards and bears have been spotted here, to my relief and to the utter disappointment of my nine year old daughter, they did not make any grand entry. A couple of friendly dogs that accompanied us from the village crashed through the undergrowth to scare away some wild pheasants and song birds and occasionally came out clutching in their mouths what looked like a horn of a ram. The entire trek was a feast to the senses; the strong, and somewhat medicinal, fragrance of pine resin, the sounds of dry cones crunching underneath our boots, the tingling cold felt acutely at the tips of our noses and fingers, swaths of blue irises carpeting the slopes and punctuated by the soaring straight boles of coniferous trees and the sun playing hide and seek. A perfect scene for a romantic duet! 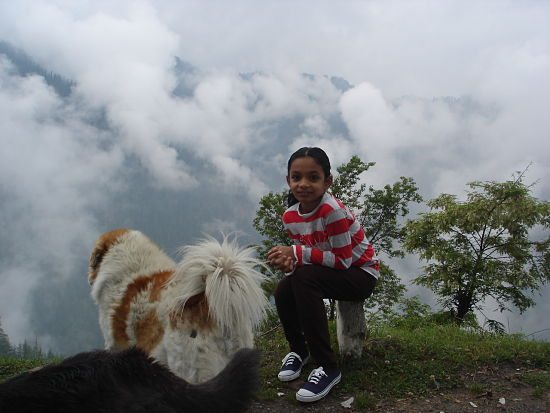 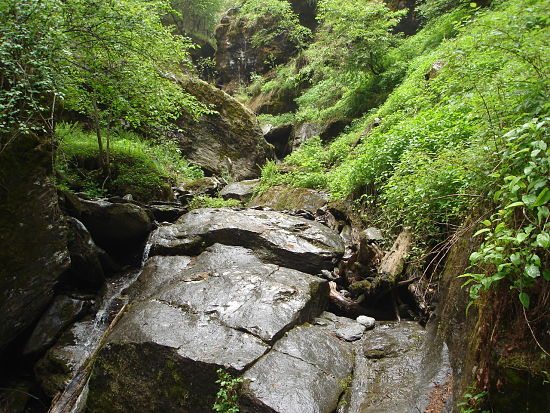 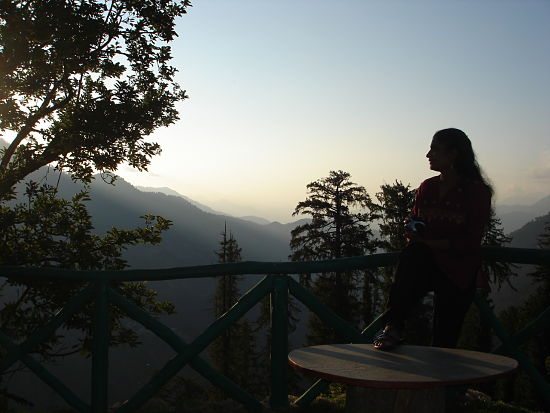 If one likes more open spaces a trek to Raghupur fort would be worth the while. A short drive to Jalori pass and a little steep hike through an oak forest leads us to a spectacular meadow overlooking the beautiful Tirthan valley. Buzzing with numerous insects and covered by small blue, yellow and white flowers one can spend an entire afternoon just lying down and looking up at the spotless blue sky (don’t forget to take some sun block) or down at the glistening brown feathers of an eagle skimming the tree tops way below. The fort itself, built by an unknown king, is not spectacular – slabs of stones piled high suggesting the presence of a rectangular structure. But it is not for history one comes here. Standing at the top most point, quite close to the fort, with a cold wind seeping through your woolens the grand spectacle of Himalayas simply takes your breath away. Names that you often read, memorize and forget in school text books are etched quite vividly in the distant horizon; the Kinnaur ranges, Rohtang pass that connects the valleys of Kullu and Lahul and Spiti, and the sparkling white Dhauladhar range. For a fleeting moment I feel the power of those distant icy peaks and in my own way understand why the Himalayas act as a spiritual magnet drawing many to its folds. As we climb down picking our way through dried and slippery oak leaves, dung and fallen branches the clouds cover the distant mountains and they disappear from view. As we walk back to the retreat in the village a few villagers accompanied by ruddy-cheeked children ask us about how good the place is. We tell them the truth and the smile we got in response was just as beautiful as those distant peaks. 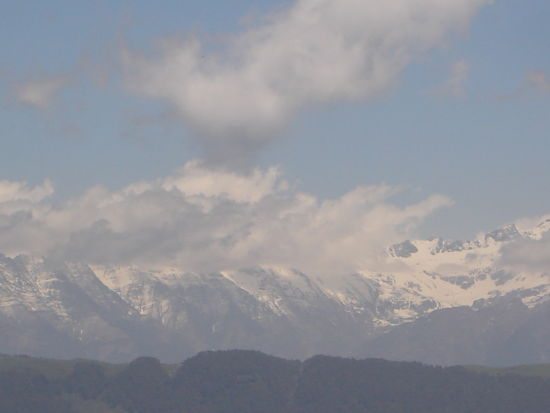 Where to stay: Not many options. Although a few rest houses are advertised it is better to stay at the Banjara retreat.

Best season: April to October. The Jalori pass would be closed to vehicular traffic in winter (December-January)

We were looking at options to celebrate our marriage anniversary and zeroed in on Wayanad. We were warned of the Kerala rains, but then…