One day when I was at the office where I was working part-time to earn money for my travels, I received a call from home. My mom at the other end of the line, thousands of kilometers away in India, made my day by delivering some exciting news. After that I found it quite difficult to stay put and confessed it to my manager. Took some time off and headed out for a walk along the Quayside of Newcastle. My office, thankfully, was right next to the river and on the quieter part of the Quayside. 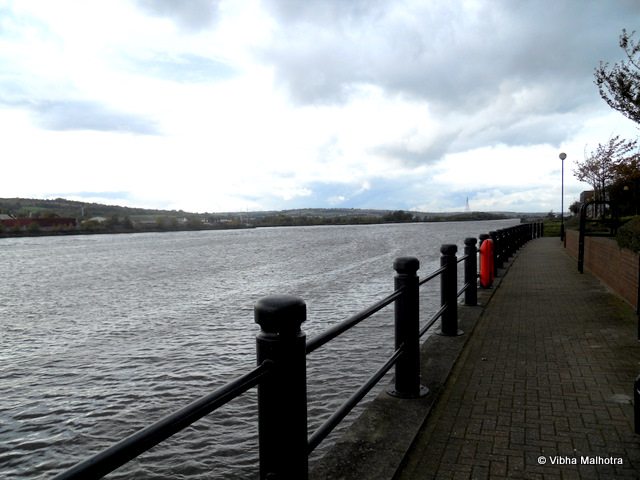 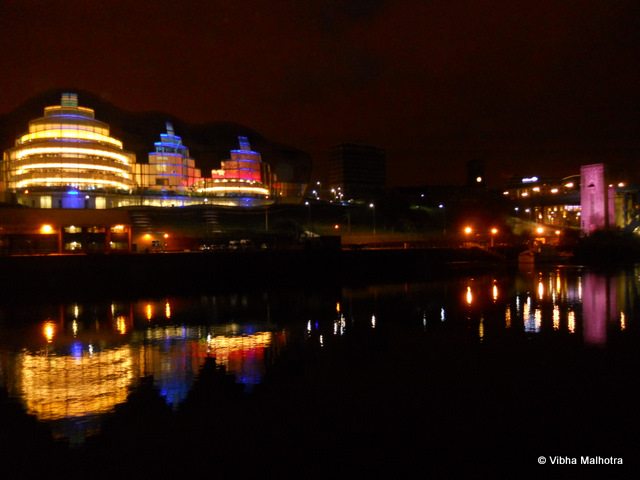 Beautiful Views of the Gateshead Quayside

Anyways, I started my walk from the Business Park and I had heard that if you keep walking towards the East along the river, you’d come across the beautiful bridges ultimately. But even the bridgeless, quieter part of the Quayside was alive with Joggers, Walkers, and Cyclists. I think I with my slow pace was just in their way most of the times. I did get a few judging looks during my walk but I just smiled back at them. I was too happy to be upset at anyone.

After about 15 minutes, I came across the first bridge across Tyne. This was a dull, concrete structure, which at a glance did not look too interesting. But after a close inspection, from down below, I located some graffiti at a place where it did not seem possible for any human to reach. I was full of admiration for the artist’s passion and spent some time wondering how many pints of Newcastle Brown Ale had been consumed to be able to reach the improbable location. 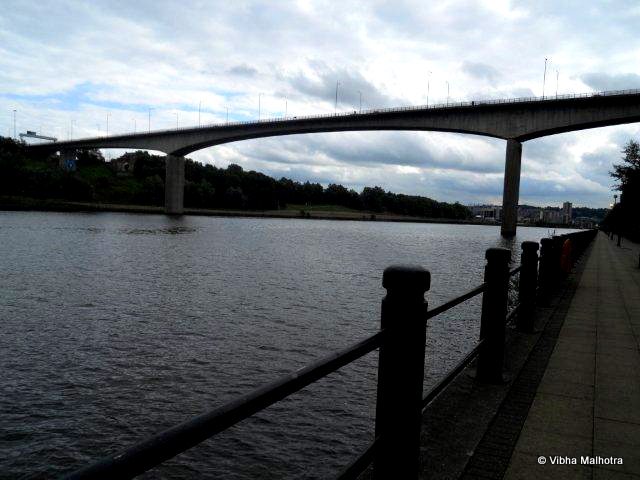 The second bridge was a railway bridge much like the old railway bridge on the River Yamuna in Delhi. Though this one wasn’t as slick as the concrete bridge, it was much more interesting with its metal mesh and the occasional trains that passed through it. And I can’t really put into words the racket the train creates when it passes through the equally guilty bridge. It is scary if you happen to be standing right beneath it, which I was of course. 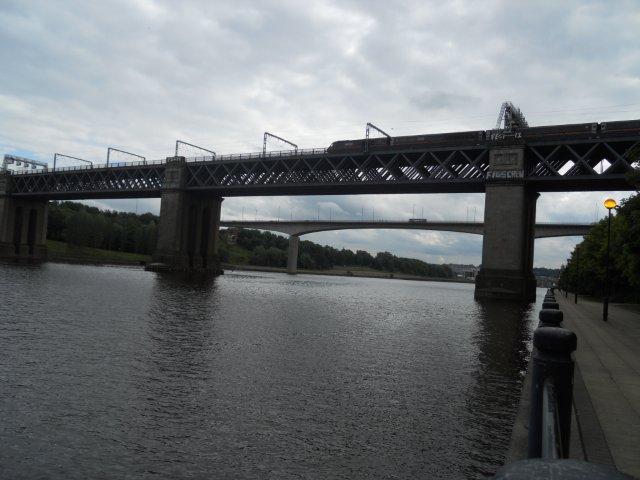 The Quayside was getting brighter now. And to complement the scene, each next bridge was more colorful and architecturally spectacular. The next bridge was another beautiful metal structure for trains to travel to or from Gateshead. And it was bright-blue. This is something I really wish for when it comes to dull structures such as pillar of metro are concerned in India. Imagine how pretty the city of Delhi would look, it they were colorful instead of dull grey. 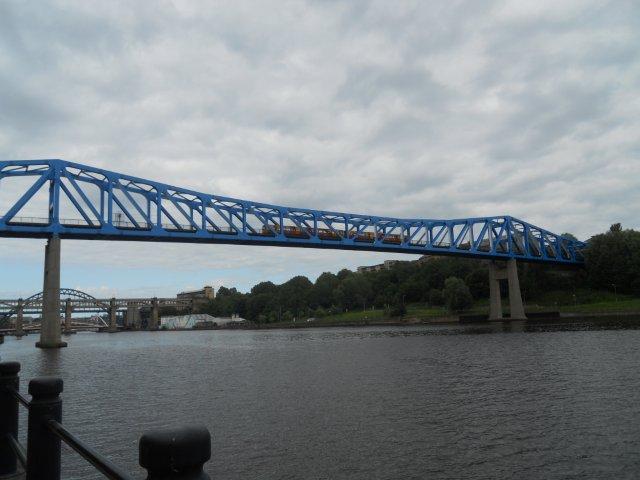 The next bridge was called “The High-Level Bridge” somewhat unimaginatively. Ever since I had set my eyes upon it in February 2011, it had been my dream to walk through the bridge. And the bridge remained my favorite till I did actually walk through it. Traffic such as buses and cars and even pedestrians pass through the bridge while the metro travels on the top. The bridge is also infested with pigeons and one might need to cover one’s head while walking through it and if driving a convertible, it’ll be better to leave the roof on. 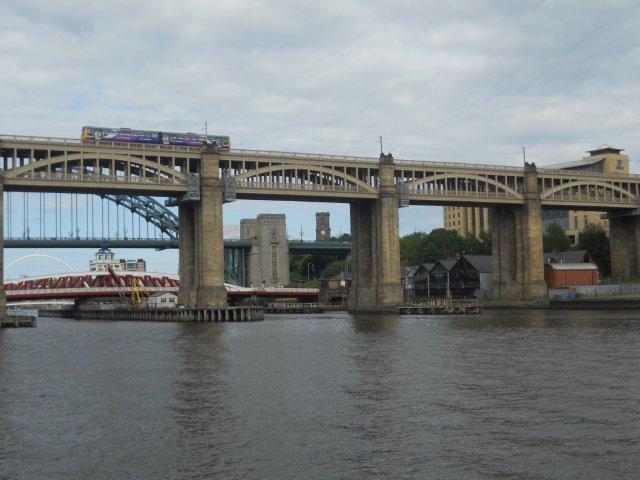 P.S. It is no coincidence that there’s a train on all of the train bridges. I waited patiently and planned the shots. :)

The next bridge was comparatively low in height and is called the Swing Bridge because it swings to let the boats pass. This and the Millennium Bridge are the two gymnast bridges across the river. The Millennium Bridge closes to let the vessels pass. By this time, it was almost an hour since I had left office. They were not expecting me back so I went ahead to see the rest of the bridges. 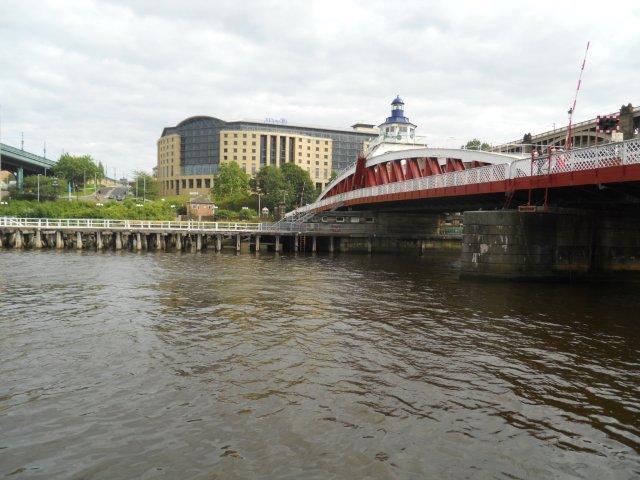 The Swing Bridge Across the River

And, of course, the next bridge was the one that is my favorite, The Newcastle Tyne Bridge. The competition for this title was tough and the Millennium Bridge came a close second. I have to confess that I may have given a few extra points to the “Newcastle” Tyne Bridge because the Millennium Bridge is called the “Gateshead” Millennium Bridge. The Tyne Bridge is home to a unique species of Gulls called the Kittiwake. The sky echoes with their shrill calls all the while and again, you have to have an umbrella or something to cover your head when you walk beneath the bridge. 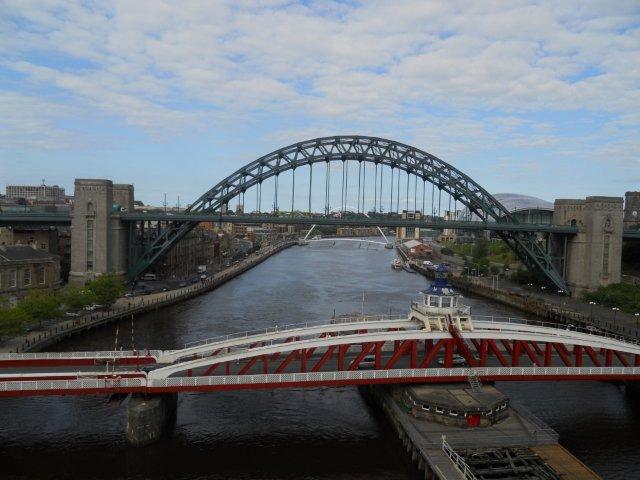 The last bridge is the Millennium Bridge, which I must admit, against my biased judgment, looks quite spectacular at night. But during the day, it is a confusing structure. Anyways, it makes for a nice walk across the Tyne and is the best way to access The Sage on the Gateshead Quayside.

After this, my next target was the Castle Keep. This keep along with the Black Gate is amongst the only surviving parts of a Castle that existed earlier. As is common with castles and their parts in the UK, this keep is supposed to have its own set of ghosts. In fact, it is supposed to be so haunted that an episode of Most Haunted was shot here. The area surrounding the Castle is secluded and eerie and as soon as you reach the black gate, the air changes. Even the occasional train running through the ruins doesn’t disturb the silence. Unfortunately, when I reached the castle keep, it wasn’t open for visitors. But I went around it a couple of times and was surprised to see how harmless the place actually looked. 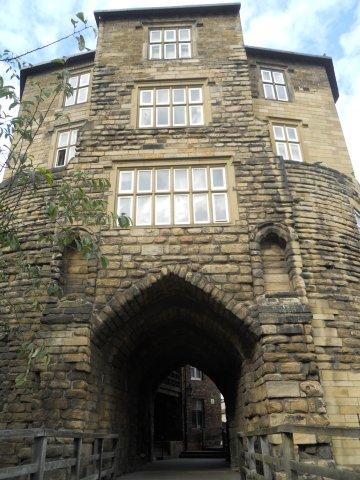 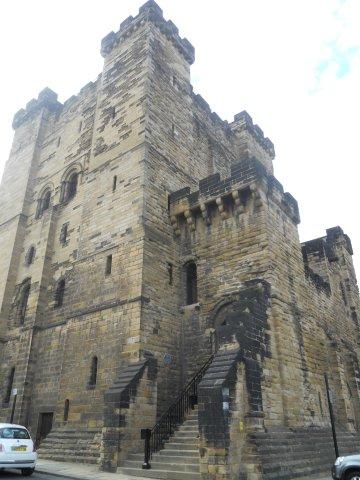 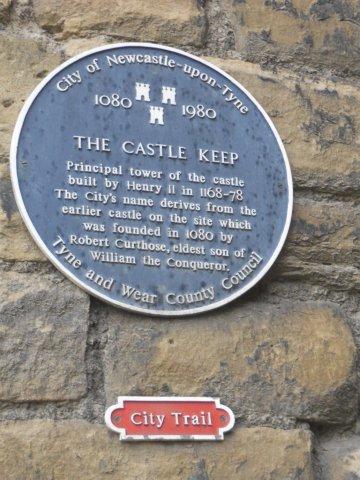 Right next to it was the entrance to the Pedestrian Way across the High-Level Bridge. And even though the sky had started darkening, I decided to take a walk across it. And that is when I discovered the pigeons. I have already told you about the precautions one must take here. Anyways, After reaching Gateshead, I looked around a bit and then headed back across the bridge to the awesome Newcastle. And very soon I was again next to the Castle Keep. It was dark by this time and the area was decidedly creepy. I felt that it was prudent to head back home for two reasons – 1) Party time was starting and very soon people would be too drunk to watch where they were going. 2) I had been walking for over 2.5 hours and was dead tired. 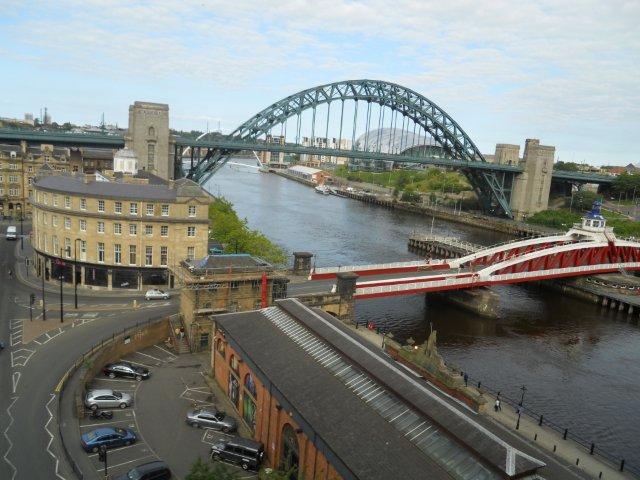 View from the High Level Bridge 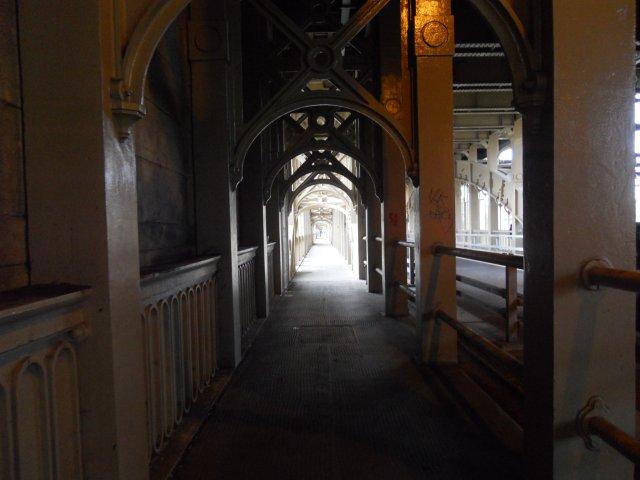 Through the High-Level Bridge

I took a bus from there to my place. And though I was exhausted, I was glad to have made a good use of my taking off early from office and having accomplished three things that had been on my checklist for long: 1) Photographing all bridges across Tyne on Newcastle Quayside, 2) Exploring Castle Keep, and 3) Take a walk across the High-Level Bridge. So it had been an evening well spent, something the Ghumakkar in me was rather proud of.

Exploring the Quayside of Newcastle-Upon-Tyne was last modified: September 2nd, 2020 by Vibha