Canada is dream destination in world. It has three time more land than India and its population is only 3.5 Crore. It has ten province (States) and three  territories.  10 provinces (BC, Alberta, Saskatchewan, Manitoba, Ontario, Quebec, Newfoundland, Nova Scotia, Prince Edward’s Island  ,New Brunswick) and 3 Territories: NOT PROVINCES (Yukon, North West Territories and Nunavut).

Now I know lot of readers like to know the process to migrate to Canada. Here is official website of immigration to Canada : http://www.cic.gc.ca/english/index.asp just click on it and get your desired information.  Every year Canada welcome to 2.5 lakh immigrant.

Today I will take you journey to Edmonton. Edmonton is capital city of Alberta Province.  Alberta has population around 40 lakh. Edmonton and Calgary are big city in that province.  Around 10 lakh people live in each city.  As you all know in old times people just migrate where they found fertile land . Same in Alberta, who migrate here around 100 years ago, Government provide him 60 Acre land free of cost. If someone need more then he can buy 10 dollar per acre as much he want and that money he has to return in instalments in next 30 years. 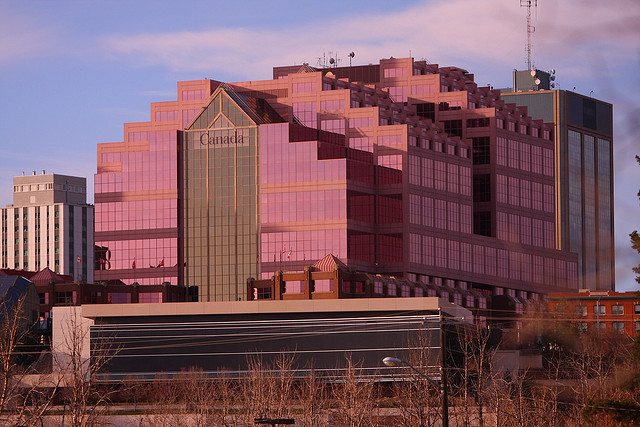 Here  in North America People called Downtown as we have Secretariat in India. In Edmonton Downtown has this pink building which is known as Canada Place. All Government offices are in this Building. Most of work  is online or on telephone.  But everyone welcome in office . Some photo studio, other shops there. You need passport photo just go there within minutes you will get your photo. Same building has passport office, just submit your passport form there and tell them when you need. Otherwise within two weeks it will deliver at home.

This Triangle building belongs to City of Edmonton and known as city centre. As we have municipal corporation in India. House tax , Buses , Taxies and other work related to city are perform here. Same as India City Councillors and Mayor are elected. In summer kids enter in this pool and enjoy water. all time great hustle and bustle at this place.

On rush hour or busy route this type of buses are plying in city. But there are Double  bus and as well as Mini bus are here On busy hours double bus ply and  on less busy route just mini bus take passennger home. Every bus stop has a number. Just make a phone call and you will know when next bus is coming.  Everything according to need. From North to South there is train like Metro plying in city. It is known as LRT. Interesting thing is same ticket is valid in bus and LRT. At University of Alberta only few buses go to bus stop other wise just one option take LRT Train. In this picture it is Sothgate Railway and Bus stop. Mostly buses stop here and then everyone has to sit in Metro if he wanna go anywhere in city. 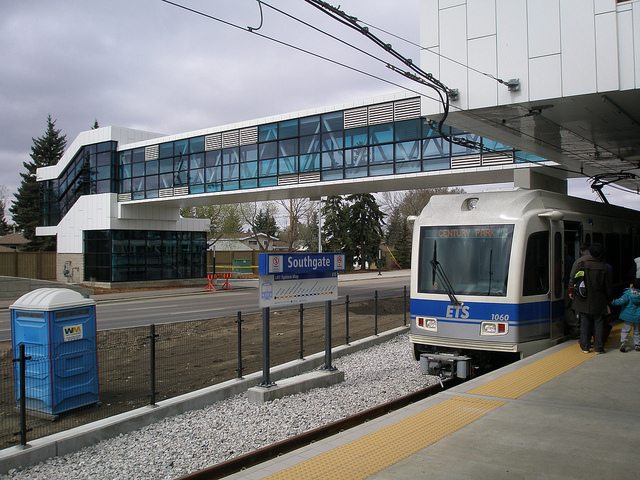 Edmonton City is situated on bank of  rive Saskatchewan. You can see Downtown. It is on bank of river.  Almost morning and evening are rush hour but not so much traffic  Jam in city. Edmonton is new city. Every thing is planned here. Street has name like 1,2,3 and very easy to find address yourself. In India we just sit in car, train or bus and driver take us on our destinaiton. But here you have to drive your car yourself and If you want to go to other city you have to known about road route. Very Interesting here only two roads go to other cities. One road go to Calgary and its name is Calgary trail, other go to Yellowhead and its name is Yellowhead Trail. It is quite easy to remeber just two roads to go out from city.  Suppose if in Delhi we have name like this , Ambala trail, Jaipur trail and Agra trail. You have to go to Agra, Mathura or Faridabad just drive on Agra trail and you will there. But in Delhi strange name , Bahadur Shah Jafar Marg, where it goes no body knows. Last time I had to visit Delhi airport from New Delhi Railway Station. I ask from so many people then I figure out take bus to Dhollan Kuwan. Then take bus to Mahipal pur. Then to airport. You can suggest Metro now.   You can see Down town in night how it looks in Edmonton: 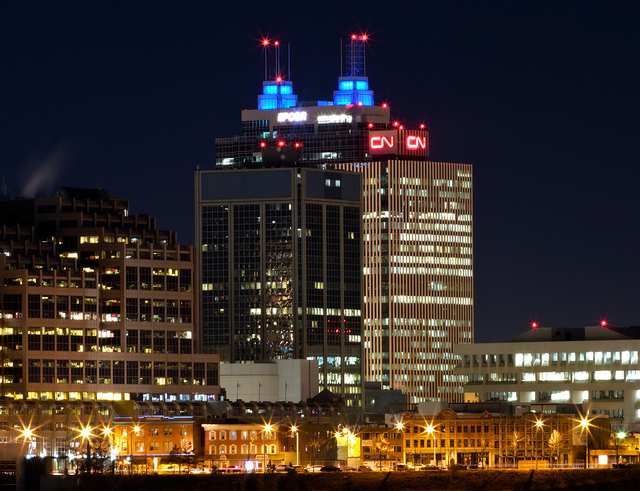 Next attraction in Edmonton city is West Edmonton Mall. It Is really big and lot of shops , ice ring, other attractions are there. Here I have post swimming pool pic where lot of sliding and water waves created in swimming pool. Lot of movie theatre are in malls. It has a ice ring where skating can be try. Special classes there. Ice Hockey is very popular in Canada. So many time hockey match performed there. Special classes for skating from kids to elder. 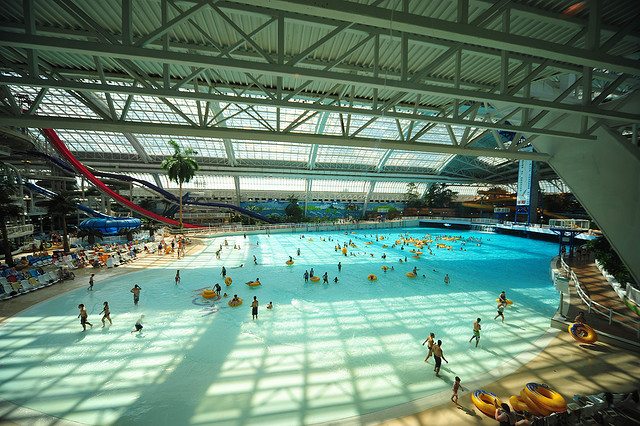 Now we can talk about economy of Alberta. Alberta is richest province in Canada. It has second largest oil reserve in world.  Some one can imagine only 40 lakh people live in that province and it has so much natural resources. Lot of work available here.  These oil reserve is enough for next 30 years and then it has largest lakes and glaciers of water. Which may be  costly then gasoline in near future.  You can imagine what is blessing on this part of world by mother nature.  10 dollar per hour jobs are easily available  here and up to you how many hours u like to work in day. People lived happy life here.  People are well educated and friendly.People  Give respect  to other and crime rate is low in this part of world. In this Picture you can see soil putting in truck, it will take to upgrader they will add water in it then cruide Oil will seperate from it. 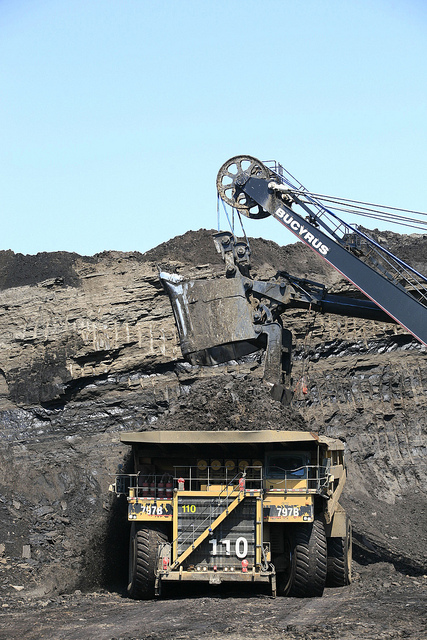 In Edmonton City has  four Hindu temples. As our Gumakkar going for darshan of lord Shiva .  We have Bhole Shankar with family in our temple and blessing  of Shiva for everyone. 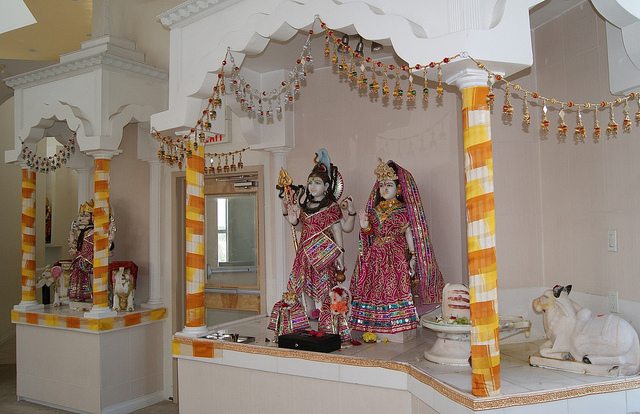 Every weekend there is Parshad (Bhandara) and lot of people visit to temple.  Hindu Saints from all over world visit here and give pravachan .  Shri Mardual Shastri come every year and satsang on Bhagwat Geeta is performed for one week. We hope this year His Son will visit and he will sing good songs on Lord Krishan . As I heard his CD which is so good.  Every year Mata Da Jagrata is performed in Mandir. Ms. Anuradha Podwal, S. Lakhbir Singh Lakha, Sh. Narender Chanchal and other Bollywood singer performed in last years. This year Mr. Bipin Sachdeva from Bollywood is coming to perfom Mata Ka Jagran in Month of July and everyone is invited. Here is link where you can watch video Karwa Chouth celebration in Temple.

In the last this is my photo which was taken in mall .  I just sit on this vehicle and shoot this picture . I think this is small tractor which can use in garden . Not be impress that I am driving strange thing . Just consider as we go to Mela and Photographer shoot picture on dummy Motorcycle or Car.

Here I am, writing first time, li’l ﻿﻿﻿﻿immature for writing ﻿travelogue, but will do my best…kindly cooporate. I am form Najibabad (Bijnaur), and Kotdwar…