Never in our wildest dreams, we dreamt of travelling to Kolkata in our own Car!!! But things go very crazy sometimes and we do such things that surprise even ourselves. We term this as “Adventure”.  It all started on the afternoon of January 2010, when we got a phone call from my Cousin, who stays in Paris, inviting us to his marriage at Kolkata. And about the same time we booked for us, our new car, the brand new Honda City SMT. Not that very day but the week next, we seeded that idea, once again for the sake of adventure, – “why not we travel to Kolkata in our very new CAR”??? Sounds crazy, but who cares, we have already put enough water to make it grow, and we can see fresh new leaves cropping up – err I mean direction. We started looking into blogs, travel logs etc, questioning few of our known travel gurus to know mostly about the unknown. I have travelled as far as Jodhpur in one day (680 kms) but travelling this far, a whooping 1500 kms one side, needs to be carefully planned and executed. We are also especially worried about the unknown factor of travelling through Jharkhand. As per plan we were supposed to get our car delivered on the 20th Jan, and the marriage party (which at times seemed to be a mere excuse rather than the goal itself) was planned for 7th Feb, which meant we had a small split of timescape to know about the new car. It was a horrendous experience for us in the beginning. For the whole next week, we kept ourselves extensively busy, getting every bit of driving practice both to add kms (to get sufficient margin for the first service) and also to know more of our new car. The hard work paid off. We managed to get our car serviced on record time and by all means we are ready for the big journey, both mentally and physically (and offcourse technically).

As for the drive plan we decided to cover most of the distance on the first day while covering the rest on the next day (just like in cricket – taking the first run quickly to make way for the second).

We also decided on the travel date. On popular demand we zeroed on 5th of Feb as the journey date, the same date we were blessed with an angel (Annoushka) two years back. Meanwhile, out of all the excitement, I forgot to mention, we hid the story of our travel from our parents (at Kolkata), and decided to surprise them. Somehow this could not be kept under the lid for long, though we were able to hold it till the D-day. I was at loss for words to when they expressed their surprise after hearing about the plan for the very first time.

We didn’t had to depend on the alarm, rather the excitement within made us wake. We don’t know how, but everybody was ready, dressed up and smiling, as planned. Even little Annoushka somehow managed to figure out something very exciting is about to happen, and showed no signs of morning sickness as we headed for the road.  By the way, on the first glimpse of the amount of luggage we decided to carry, we thought we might require another car to carry it. But the boot of the new City proved us wrong. It is a huge one, and we were able to fit in every bit of furniture we thought of carrying. The boot was under stress testing – no doubt on that. 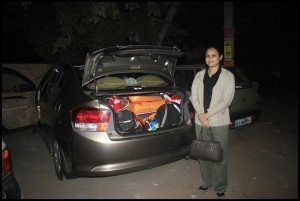 The boot was totally packed with luggage

It was 5:00 am sharp that we hit Mathura road. It was pitch dark outside, and we were zipping through the sleepy corners of Delhi-NCR. The cold February wind was breezing outside – Delhi was under a cold wrapper – but nothing could stop us. The heat of the excitement made us sweat.

Part 2 of the story