Next morning we woke up really early and started for Palolem beach in Goa. The Goa border is some 20 km from Karwar and Palolem is a famous beach of South Goa. Till now, I haven’t been to Goa and not even researched about it because it is so very well known and appeals more to people looking for party and clubbing experience and I had kept it for some other time. Probably it had rained last night in the region because of which the terrain was all wet and sky cloudy. The greenery in form of trees, seasonal plants/shrubs and even moss/algae was everywhere. House walls, bridge railings, rock faces and just about anything which has potential was draped with moss. After driving for an hour or so around 7:00 AM we hit the beach. The beach was almost deserted except lot of fishermen activity towards north of the beach and few locals angling in choppy sea. 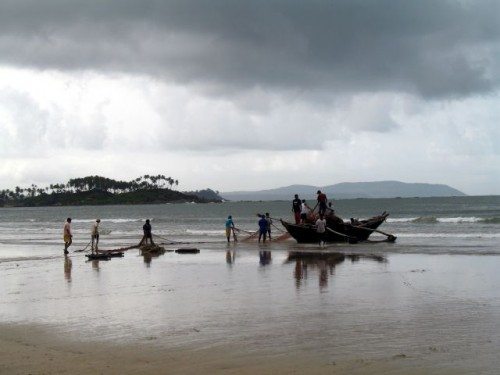 We were in no mood to waste time and immediately hit the waters. We splashed, we jogged, we sat and admired the natural beauty around. It was like the whole Palolem beach was for ourself. Soon, foreign tourists start trickling in but nowhere the number it must be during the season. 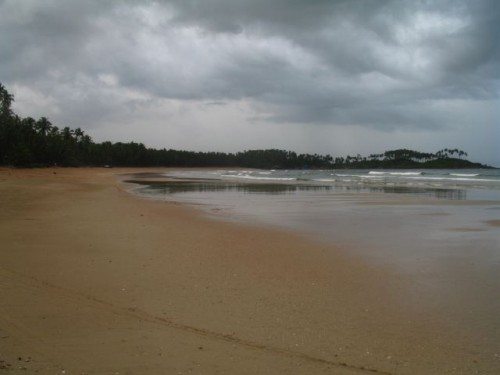 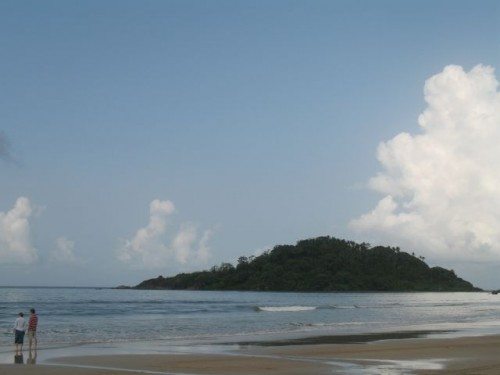 A couple came out to admire sanctity of the scene

The sky was mostly overcast with occassional rain but very mild and welcome. Here the waves were stornger and we let waves carry us away and we just gave in. After having enough we headed to a restaurant in a shack. It was buzzing with lot of foreign tourists, the decor and presentation to match the international needs and menu had lot of continental dishes. 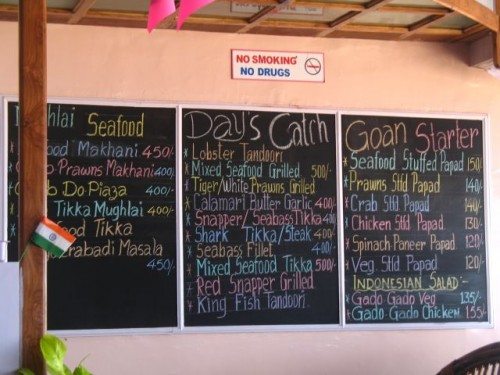 After gorging on peanut butter toast and scrambled eggs, we were all set for a long day ahead. We left the place and headed back to Karwar. In between we stopped to purchase the local drink, cashew fenny. We bought 2-3 varieties of bottles and chatted with the shop owner. He told us about a secluded because called Galgibagh which he claimed is very good. Since we had lot of time to spare, so we headed for it. It was a beautiful 9 km drive inside from NH-17 and we came to this beautiful beach. This is probably one of the last beaches in Goa before Karnataka boundary. 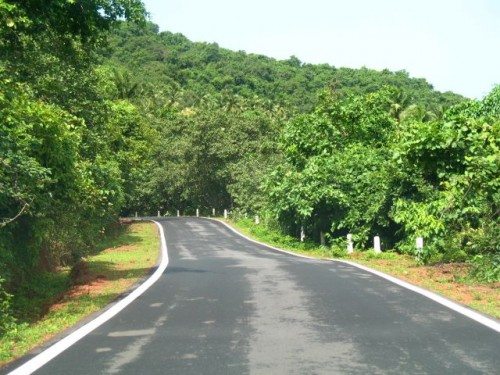 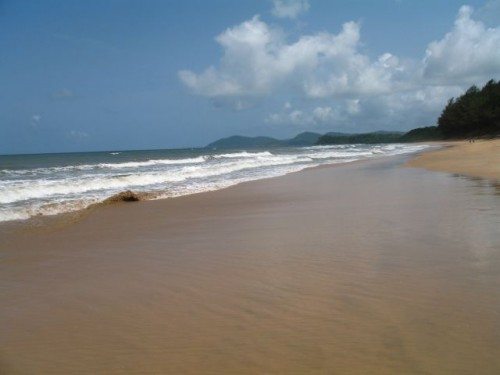 By this time, sky had cleared and it was nice and sunny with mild breeze. There was no tourist except us and miles of white sand. The beach itself tree lined which provided natural shade if you wish. The beach is a protected one and is turtle nesting site as claimed by a board on the approach to the beach. We had to literally tear away from such a wonderful place and head back. From Karwar we went to Hubli where we dropped off Nitin’s brother in a Bangalore bus. The border checkpost between Goa and Karnataka caused a little trouble as only there is a regulation on how many bottles of fenny one is allowed to be carried. The road from Karwar to Hubli is great with lot of forests around. Probably the drama or our unexpected detours was not over, so in between, we took a detour to Magod waterfalls. It was 14 kms inside from the main highway. It is not possible to go upto the falls but only oggle at it from a distance. 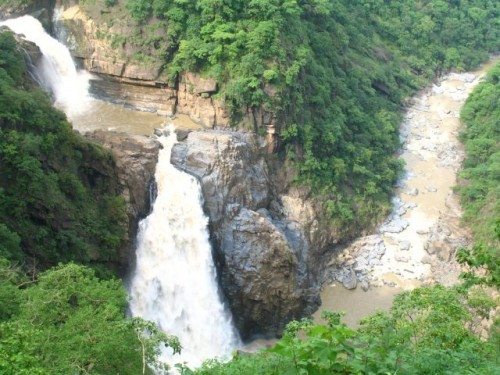 Magod waterfall near Yellapur enroute to Hubli from Karwar

But still it was worth going there. It is a two stage fall and with monsoon rains it was gushing. Hubli town was difficult to drive around due to lot of one ways, traffic and bad roads. We visited a beautiful local temple surrounded by a lake and had dinner. After seeing off Nitin’s brother on a Bangalore bus, we headed towards Gadag, Koppal and Bellary in night. This was a bold decision considering that we were to drive in the night on a route which we haven’t researched nor it is a prominent highway. We even enquired about the route buses usually take for Hyderabad and decided to follow that. The roads soon turned a nightmare and with no signs of directions we lost way in between and instead of Kurnool ended up at Guntakal. To our badluck we hit those roads which were washed away during recent floods, so there was no tarmac. It was pitch dark outside and no people or locality visible and in these areas language is also a problem. Somehow we managed that ordeal and swore never to try this adventure again. Once at Guntakal we thought of playing safe and reached NH-7 Hyderabad-Bangalore road at Gooty. After that it was just a monotonous drive to Hyderabad.

Having completed the big road drive (Delhi – Jaisalmer- Jodhpur – Delhi in 4 days) on previous weekend, we were high on driving!

The distance from Delhi to Lucknow is approximately 500 km by road. The standard route is Delhi – Hapur – Moradabad – Rampur- Bareilly – Shahjahanpur- Sitapur – Lucknow. Another new route that is becoming popular is the Delhi – Kanpur – Lucknow route. Some of my friends tried this route few months back and said that it is fast as it’s a 4 lane road but longer than the standard route by about 50 km. We decided to take the longer and the faster one.