If Shimla was adultared , the this was to be pure Himachali fun.  Outlook Gateway book on Himachal Pradesh had suggested NH22 TO Sainj via Kurfi, Theog, Narkanda, …. Jaroli Pass ….. Aut and NH21. On enquiring with every local we were told that the NH 88-NH 21 route was the best. The road via sianj, was single lane and unreliable, in any weather. Much to my dismay, I took the route as suggested. This required us to traverse NH88 for around 70 kms and thereafter, near Bilaspur join NH21. Though this route was certainly very good with excellent scenic roads and also had much other benefits such as hotels and tyre repair shops, something tells this roadie that true himachal was missed.  I have made my mind. In my next visit, after obtaining more reliable information, shall certainly route via Jari Pass.

Breakfast came at Hotel Sagar, Bilaspur, at the “table with a view”. Just post the junction wherein the NH starts the route for Kangra/ Macleodganj we stopped for a quick bite. The loo-good, food- average but the view – Wow. 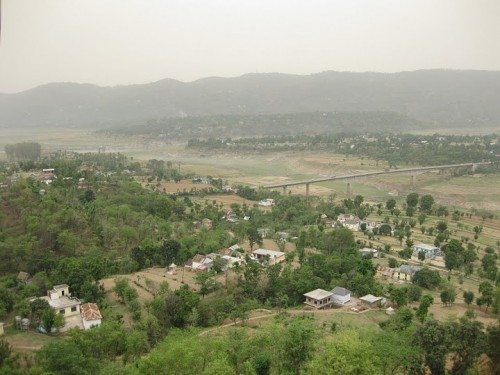 The Restaurant Table With A View

Though more than half the road-journey had been completed the main fun was yet to start. That was so as I had routed via Agra and the return leg was a straight run. The road -post Sundar Nagar became very scenic. 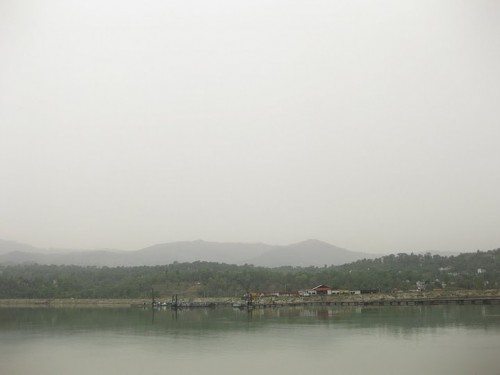 The Lake Reservoir at Sundar Nagar

The canal at Sundar Nagar on NH21

Nearing Pandoh a very different sight overwhelms you. Imposing mountains and the deep, gushing Beas river. This route till Kullu was the most exciting and made the adrenal high!!

The deep, gushing river Beas.... notice the road where the above photograph was taken earlier 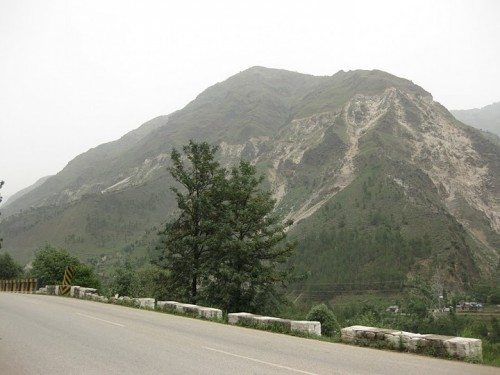 We should not have entered Kullu. Near Kullu a bridge makes a cross-over to the state highway, passes via Naggar, but is not marked at all. We stuck to the NH and entered Kullu. Though the road continues to be scenic and Beas now, merrily flows alongside, the traffic and the condition of the road slows you down quite a bit. 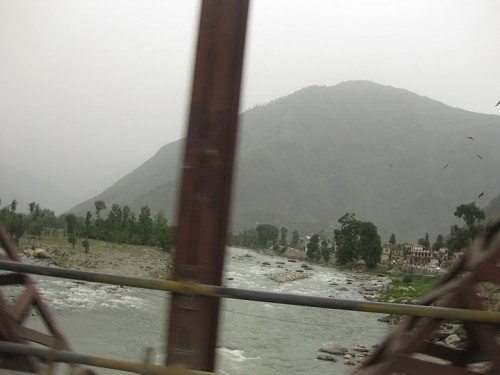 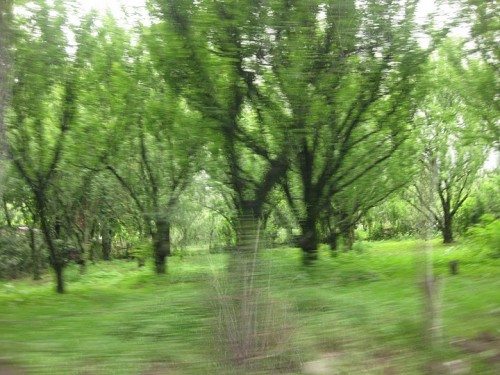 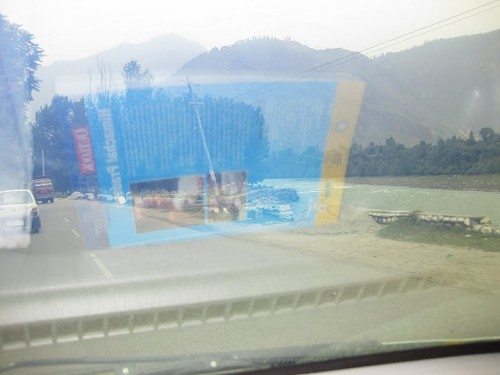 The river Beas flows merrily alongside 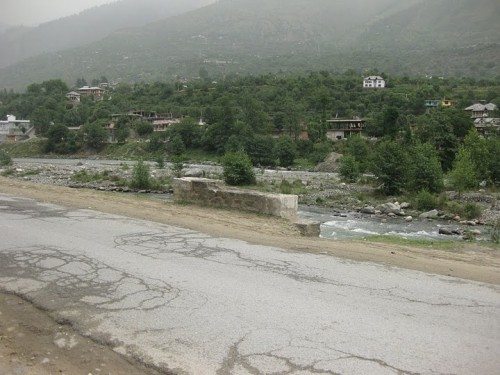 The Road though scenic was ill-maintained

Post checking-in we headed straight for the restaurant IL Forno. Outlook Traveller had raved much about the place. I was, since reading the book,  dreaming to eat those pizzas  and boy with the first bite … I tasted heaven!! All those long kilometres and the span of time it too to reach.. this was more that what I had expected (All roadies-foodies – are you listening?!?) . 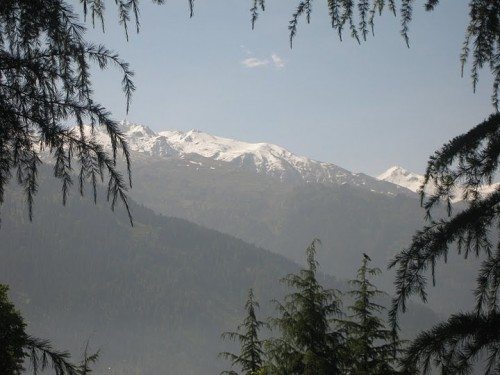 The view from IL Forno 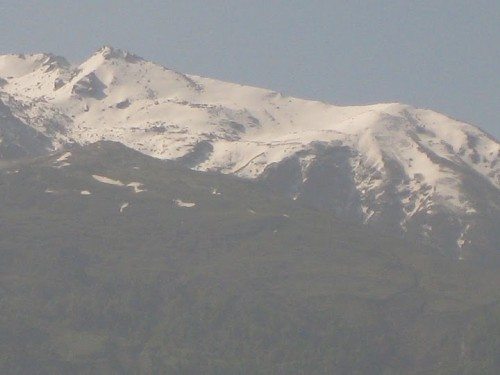 Another view from IL Forno

After a sumptuous meal we visited Hidamba temple and strolled back to the hotel. The hotel was much below than what we had expected. For more details read the review on Hidamba Cottages.

Much late in the night, my friend, who drove from Delhi (a 15 hr drive) joined us at Manali. Now there were two roadies at Manali.

The next day we lazed around at Manali Mall. Met agents who helped us plan for Rhotang Pass. Breakfast was at Cafe Amigo and trout fish lunch at Johnson’s and both were good experiences, especially Amigo as they played Krishna Das Bhajans which were mesmerising. We also shopped for tidbits (cherries and zucchini, a huge one for Rs 15/-… I carried it all the way back!!). After much pestering by the masseurs at the Mall, me and friend decided to go for it. 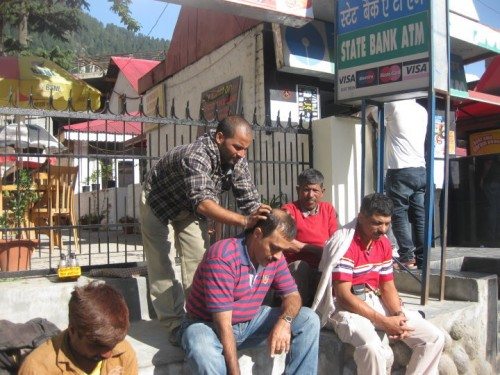 A massage bang in the middle of the bustling Mall road ... boy a very sight for all!!!

Due to reservations issues we shifted to Hotel Kunzum and thereafter had dinner at Khyber –  which was terrrible.

Early morning we started for the trip. En route we were provided with winter gear and then the ski instructor with his set joined. Both, the winter gear, the instructor and the number of ski sets were not as had been described by the agent and that was disappointing. There was hardly any choice. We had, so as to speak, told threateningly  –  take or leave it. Grudgingly, we took it.

On hindsight, rushing at such an early hour is not required. One can easily leave at around 0800. The hotel will provide you with hot breakfast (packed, as in our case was dry sandwiches) and the sun too would have risen thus lessening the the biting cold. Yes your drive will considerably slow down as the traffic picks up .. then so what?? 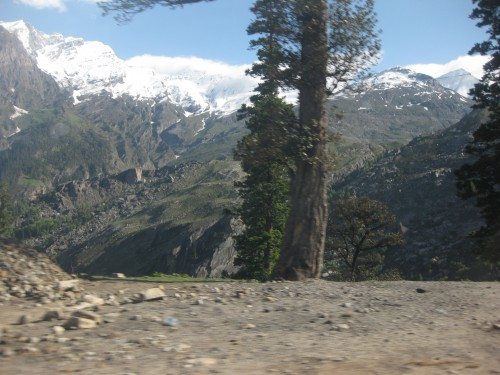 The scenic road made us forget the biting cold 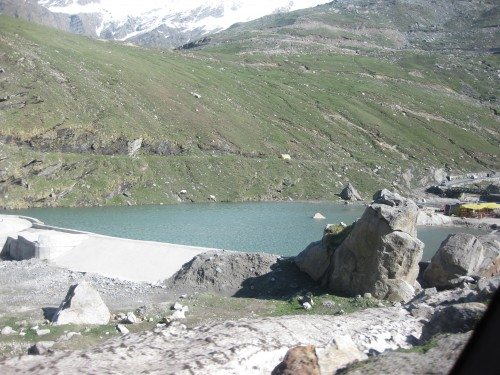 A lake near Marhi 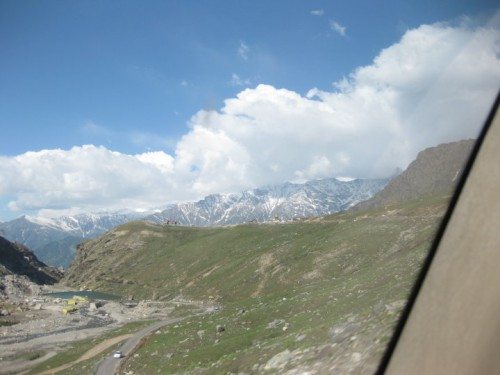 At Marhi we had brunch. Strong winds, more biting cold, ill fitting winter gear (the shoes were gum-boots suitable for rains and the feet chattered their own song), grumpy ski instructor, good driver, ONE loo with a big line, but the  parathas – YUMMY. All was forgiven!!

The hired car couldn’t proceed till the Snow Point due to traffic and we rode on the mules. At Rhotang Pass, we split, few did sking and the rest of us went for snow scooters. Then we ate the worlds best “maggie noodles”. Nowhere, repeat nowhere can there be a better display of  Indian ingenuity… nowhere… 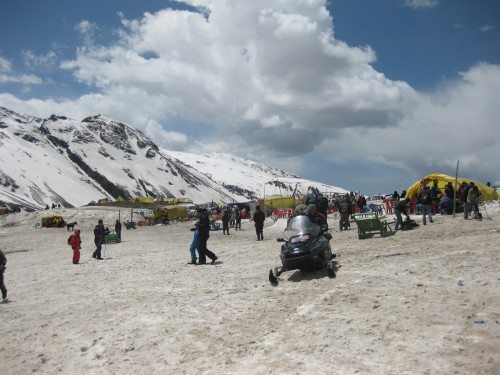 and we skied and skied 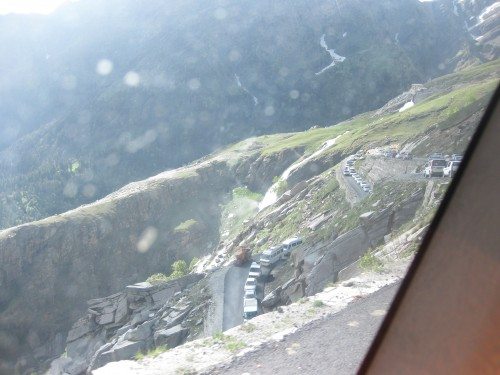 Oh! Rhotang !! We got ALL - fun, the gushing waterfall and the beeline of cars

We completed one week in London …….. the UK today! Our plan for the day was to go to the Globe Theatre, where Shakespeare’s…