With the EU crisis in news all the time these days, who isn’t familiar with the EU head quarters .i.e Brussels? However, when we planned a trip to Belgium, our intentions and agenda was not to solve any crisis :)
We planned it for a chocolate tour and complete relaxation of our mind , body and soul!

Belgium is famous for its capture of historic beauty, financial development post World wars, and definitely its Chocolates!! With this claim-to-fame, it surely was my MUST VISIT country!!

We planned to keep it as a 3 day trip and we had just 3 cities on our mind – Brussels, Ghent and Bruges. The cities are well-connected and it shouldnt take more than 30-40 minutes to hop from one to another. So, we planned to go to Brussels on the first day, followed by Ghent and then Bruges. To get to Brussels we chose Eurolines. It was a comfortable and short journey by road (3 hrs).

Without much ado, let me begin my experience in these cities.

Brussels: The capital city of Belgium and the Head Quarters of NATO and EU. It is a modern city with well-connected transportation inter city and intracity and also with other countries of the EU. So, getting here is not a problem at all in any season and for any reason :)

It is culturally rich and vibrant. Our first stop in Brussels was none other than the Tourist Information centre. But to get here, it was some experience! The Brussels north station was our hop off point from Eurolines. From here, we had to go to the Central station and then from there a brief walk down the market square to reach to the Info centre which apparently happened to be in the Grand Market region. The city map is not too intuitive and it did turn us off initially. But this city dint take too long to lift our mood! 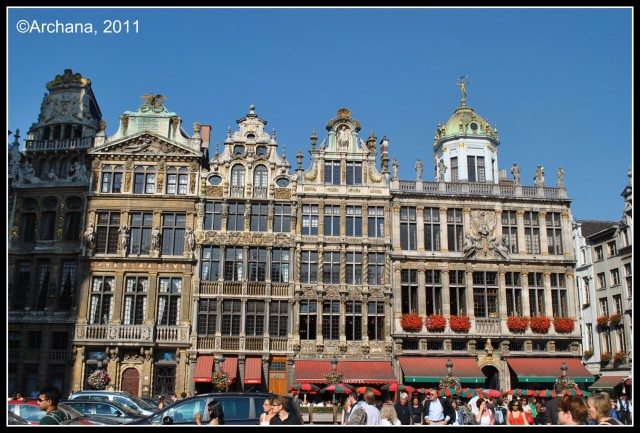 We then planned to visit the Atomium – the famous structure originally built for the Trade Expo which happened in 1958. 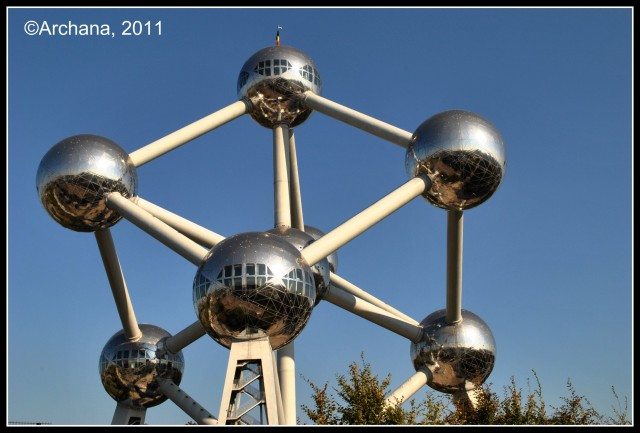 From here, we next went to Mini Europa – the park with all of Europe’s landmark monuments’ miniatures! This was a truly worthy place . The miniatures are full of life and activity. The detailing is very neatly done to exhibit how the life is like in the city of those monuments. For example – Ghent city is shown there – with Canals, some mills (depicting the cloth mills there) and even a miniature of the garbage carrier vehicle!! How better can it get? So, with this park’s visit, I can claim to have seen entire Europe. So Mini Europa equals Europe in a nutshell! 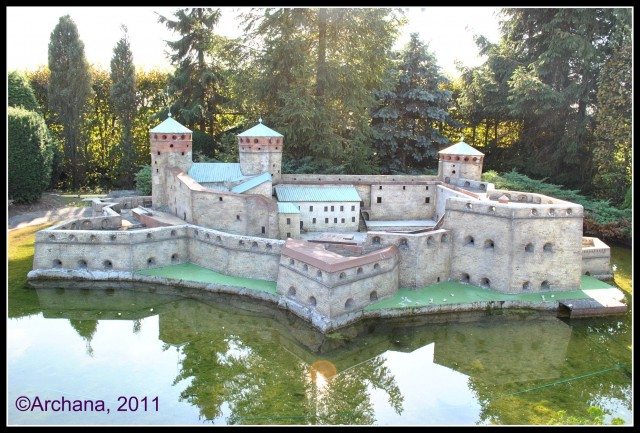 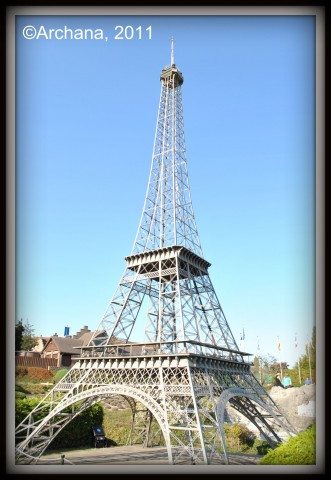 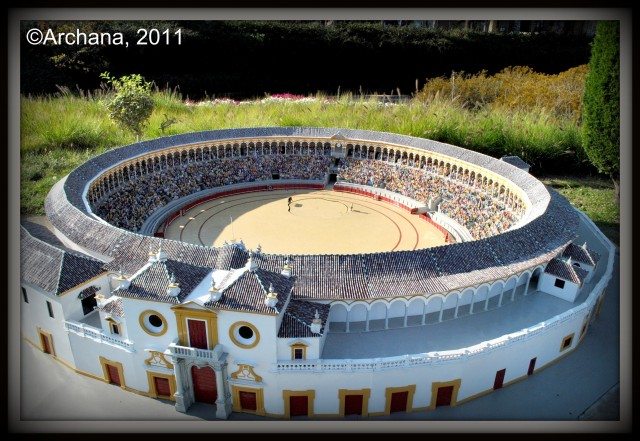 From here, we headed towards Ghent – where we had planned to halt for the night.

Ghent: What a welcome it was! Initially apprehensive about this city because of our Brussels experience with the clumsy maps, we got down at St.Pieters station. And then, as we stepped out, we looked lost! There was some construction work going on and the place looked otherwise deserted. To add to the owes, we had forgotten our hotel address. But we walked like we would conquer the world ! After walking for about 200 m, we found another hotel – Trianon. This was the wisest thing we did during our trip – to go to this hotel and to ask the receptionist to “lead kindly light”.

The lady at the reception was sweeter than the sweetest praline chocolate of Belgium :) She called our hotel guys and took down the address and also offered us a room for sometime so that we could connect to the internet and jot down more information (in case we needed any). As we stepped out, a man came running behind us and handed over 2 tickets – day tickets to roam around in the city! Cant get any better, can it? :) I began to love the aura of this city.

It was already late in the evening, but we decided that we would see something in the city before we called it a day. So, we headed towards the Gravenstein Castle.

This castle is different from the usual ones. It has a strong stone structure surrounded by a canal and was formerly a place where people were executed for their misdeeds! The castle today holds an exhibit of the weapons and methods of execution of the former days. The occasionally spotted knights in shining armour are a highlight though :)

This city is calm, well-lit and beautiful. We spent the evening walking along the pavements next to the canals, sat in the middle of the city in the open restaurant and experienced the light air as we had our dinner. We then took a stroll to explore the city a bit. It was beautiful – this city which is famous for its lighting during the evenings took my breath away!!

The heaviness that Brussels had created on our mind was wiped off by this enchanting city. Its aura like I mentioned earlier is captivating!

The next morning, we decided to see some monuments – The Belfry and Cloth Hall , St. Bavo’s Cathedral ( of the Mystic Lamb fame) and some more. After these, we decided to do one of my big things on the wish list – a horse carriage ride!!! It is a VERY romantic wish that every girl would have and truly by god’s (and my hubby’s) grace I must say, I got to do this!! 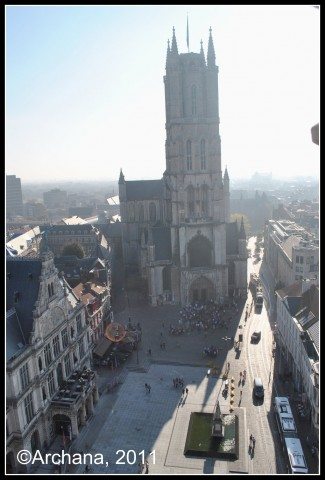 View of St.Bavo's Cathedral from Belfry 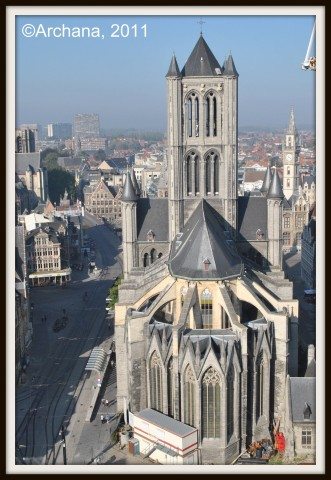 Fiona was our horse and Melanie was our Driver. Melanie guided us through the tour and spotted some of the famous structures of Ghent city. The main attraction in Ghent is the 3 consecutive towers – Saint Nicholas’ Church, the Belfry and Saint Bavo’s Cathedral. We also saw a statue there which Melanie described as that of a famous THIEF!! We laughed at it as she continued the story of this good thief. It is said that this guy had stolen a spinning wheel from England. But this had brought the people of Ghent lot of wealth since it enabled Ghent to grown as a cotton looming city! Ghent is even to this day, one of the richest European cities.

While we paraded in the carriage through the city, we not only enriched our knowledge about Ghent, but also about Fiona and Melanie. Fiona was Irish and Melanie was Belgian. The Irish horse with a mare’s name was Melanie’s breadwinner and favourite pass time. She loved Fiona and I fell in love with him (as in Fiona).

We bid adieu to this mesmerizing city after a brief shopping of chocolates (quite an oxymoron isn’t it? coz chocolates shopping can NEVER be brief :) ). We now boarded a train to Bruges.

Bruges: Famously known as Venice of the north, Bruges is a world UNESCO heritage site. This city is an abode of more museums and many canals with sparkling waters. Being Venice of the north means boats and more boats :) Here, we set ourselves footloose with absolutely no museums on our charter. We walked through the city and encountered more horse carriages every now and then! This city had horse carriages too – but here it seemed more commercial and not as enticing as it was in Ghent. However, this city felt like my home of my previous birth – because I felt so much at home and as if I belonged there! Just imagine this – a girl who loves horses and is in this city of canals and romantic boat rides – who wouldn’t belong there? 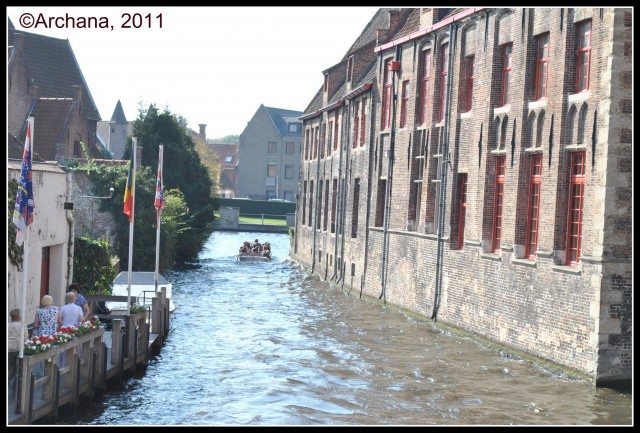 We had lunch in a nice restaurant in the city’s market place and enjoyed the flavors of the food and the folks. Everyone there were surely travellers and they dint leave a chance to contribute to the vibrance of the city. It felt like bliss!

Belgium trip turned out to be a tour savouring the splendor of the cities and less of chocolates (only by comparison)!!