As always it started like this. I was on the phone talking to my sister-in-law, “No, No, this time we are going to Udaipur after a long time and it will not be possible to take a break in Rajsamand. Please don’t insist.” To this pleading, my sister-in-law threw the bait, “Ok, as you wish. We are planning to go to Kumbhalgarh and stay there for a night.” And I found myself jumping to the bait. I have this weakness or may be a God gift of traveling legs. It is hard for me to resist any offer of traveling.

The nearest rail-head for Rajsamand is Mavli junction. Mewar Express, the train from Delhi, reaches Mavli at 6:00 am in the morning. At this time of the day this small station is just coming out of its sleep. In a hurry to reach your destination, don’t forget to wait over the bridge to see your diesel engine puffing away smoke while slowly awakening this sleepy little town out of its soporific slumber. 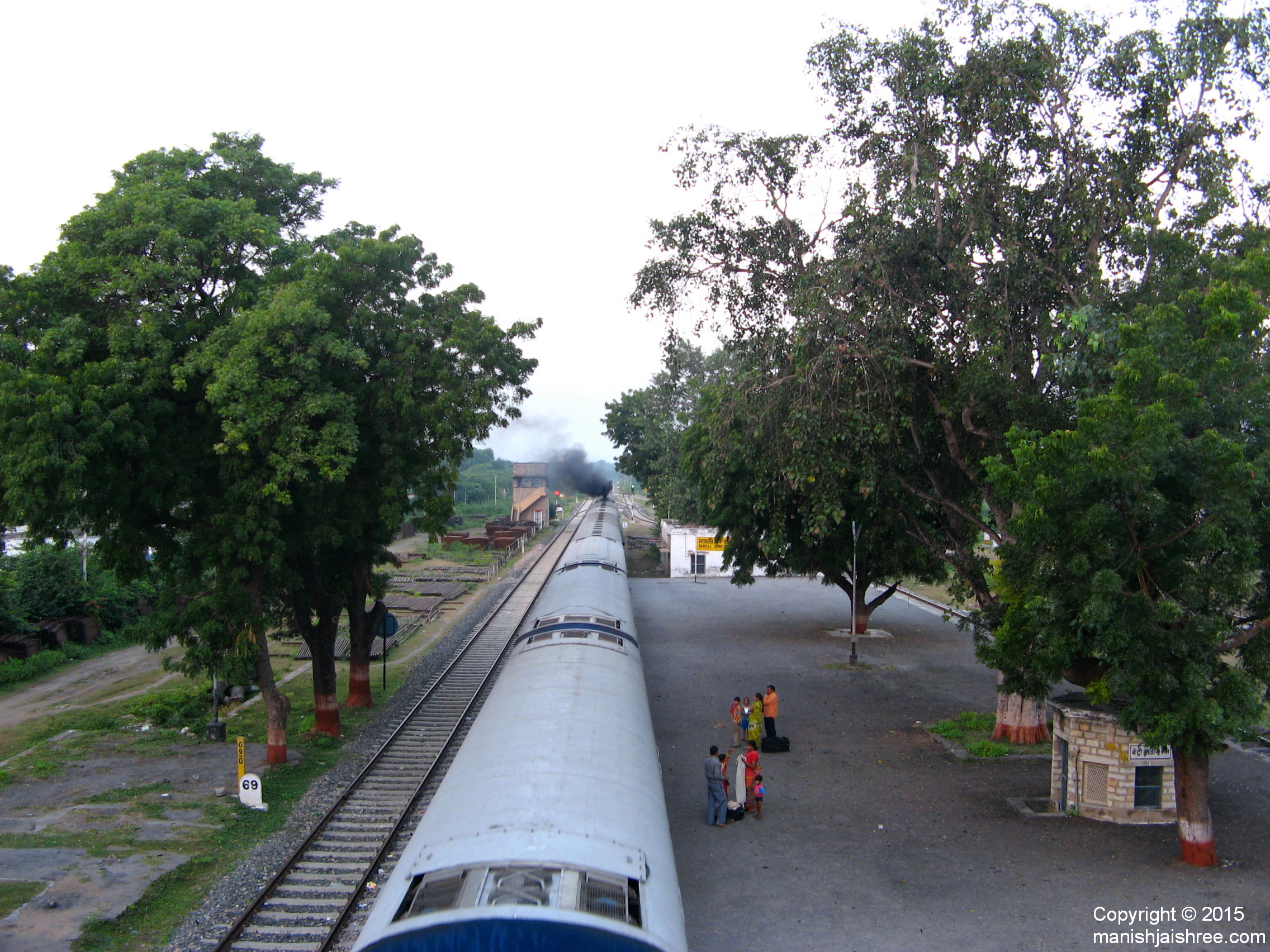 The conditions of roads are good even in the remote areas of Rajasthan and so drive from Mavli to Rajsamand is pretty smooth. Rajsamand is approximately at an hour and a half’s drive away from Mavli.

On the way, we came across vivacious school kids, walking/cycling in groups towards their schools. They looked fresh and bubbly. Mornings have these magical wands that take away the lethargy and setbacks of previous day and bring new hopes and enthusiasm in every living being. Perhaps this is the reason that author Robin Sharma in his famous book – “The Monk who sold his Ferrari” has put so much emphasis on getting up early. I am quoting below, from this book.

“There are few things more natural than rising with the glory of the first rays of a new day. The sages believed that sunshine was a gift from Heaven and while they were careful not to overexpose them, they regularly had sunbaths and often could be seen dancing playfully in the early sunshine. I (the narrator in the book) firmly believe that this was another key to their extraordinary longevity. The sun rejuvenates us. It is a delightful physician that releases vitality and restore your emotional and physical vibrancy.”

This habit of getting up earlier than the sun is part of traditional Indian lifestyle. It may have got altered in metros but is still intact in other parts of the country.

In Rajsamand, after spending the whole day in lazing around and gup-shup-ing, in the evening we headed for boating.

Rajsamand is situated around 66 km in the north of Udaipur. This town got its name from the Rajsamand Lake that stretches to a length of four miles and 1.75 miles in width and has an approximate depth of 60 feet. 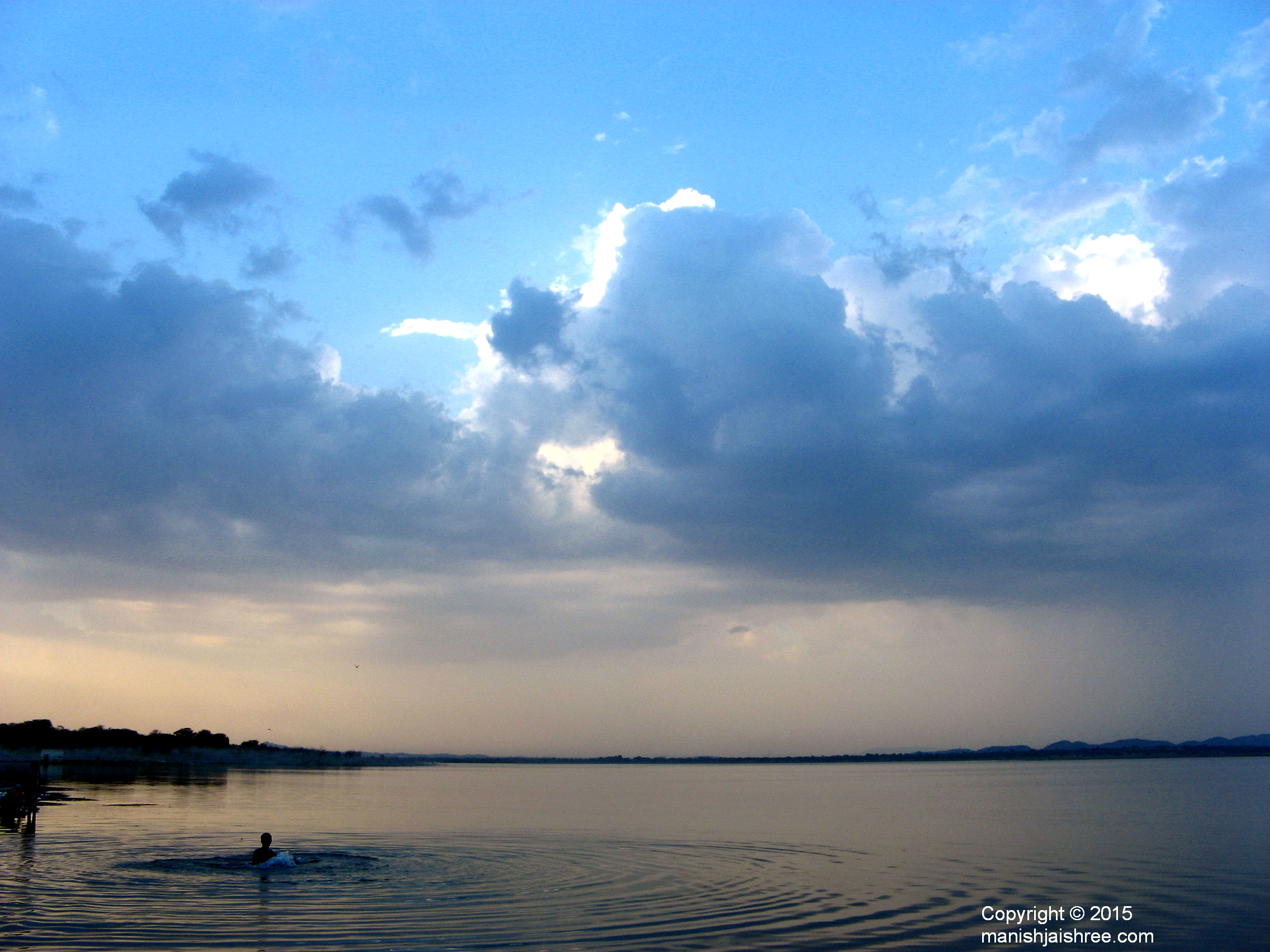 The Lake was created by building of a bow-shaped dam over river Gomti by Maharana RajSingh-I, a contemporary of Mughal emperor Aurangzeb. In 1661, this region suffered from the impact of a severe drought and famine. To provide employment and relief to the victims of the widespread deprivation Maharana Rajsingh got constructed this dam. It is among the oldest relief works done in Rajasthan. The construction of the dam took over 14 years and an approximate investment of around 1.25 crores.

This dam is also known as “Nauchowki Paal” as there is nine chowkis or platform over the steps leading to the water. The auspicious number nine has been considered in many aspects of the design and the architecture aspects of the dam. It is believed that the dam measures nine hundred ninety nine feet in length and ninety-nine feet in breadth. Every step measures nine inches and there are nine white marble cenotaphs build on the dam. Each of these cenotaphs is nine feet in height and is at nine degree angle from each other.

This dam also boasts of the largest inscription in the world that tells the story of Mewar in Sanskrit. These inscriptions are etched on 24 granite slabs and are known as “Raaj Prashashti Mahakavyam”.

After driving through a busy, congested market we entered into a narrow passage and parked our car around the old Dwarkadheesh temple. The area around had a typical feel of old densely packed houses with small jharokha openings. The temple walls were painted with slogans of “Jheel Bharo Abhiyaan”.

Recently I read a thought provoking article by Tavleen Singh in which she pointed to the ills of modern Indian mentality. She wrote, “I have been in villages where people admit that they stopped repairing the village ponds and ended the ancient practices of harvesting rain waters because they believed that the `Sarkar` owed them free piped water in their homes. This distorted mindset, I believe comes from the idea born of Nehruvian socialism that the government would take care of everyone’s need even if nobody lifted a finger to pick up a piece of waste paper”.

In my opinion she has hit the bull’s eye in her criticism of our lax attitude. This attitude has definitely caused much harm to us. The “Jheel Bharo Abhiyaan” slogans were an invitation to change the mindset, for an active participation to bring changes.

We entered the lake complex from the backside of the temple. There were stairs to go down. The whole area had an aura of tranquility, as if the prayers of many, continuing from past centuries had had its impact on the lake surroundings as well.

On the stairs vendors were selling corn for the pigeons and fodder for the fishes. The flocks of pigeons were enjoying the feast of corn on the stairs and at another moment they all were flying up together sending out a gust of cool air.

I was a little anxious. We had promised a boat ride to the kids but were late. I was wondering whether we be able to keep our promise. So, we rushed to the jetty stand. At jetty stand it was confirmed that a boat would leave soon for the last round. Phew!

My niece rushed back to bring fish-fodder. The kids distributed it equally amongst them and we settled down in the boat. 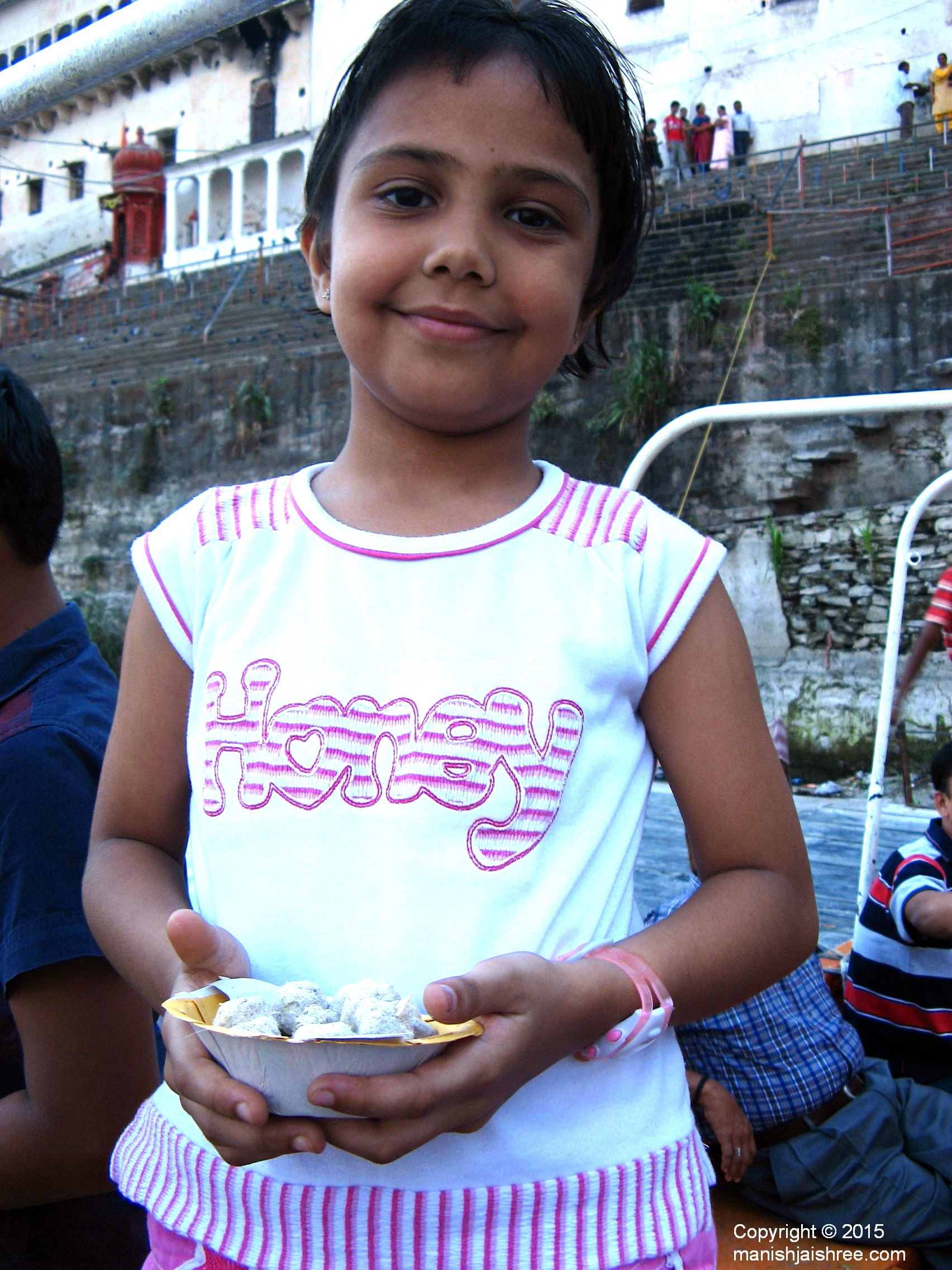 My niece with fish-fodder in her hand at Rajasamand Lake

Soon, the kids started throwing it that attracted shoals of fishes. As competition among little fishes increased, I saw them actually jumping out of the water trying reaching faster and closer to the fodder. 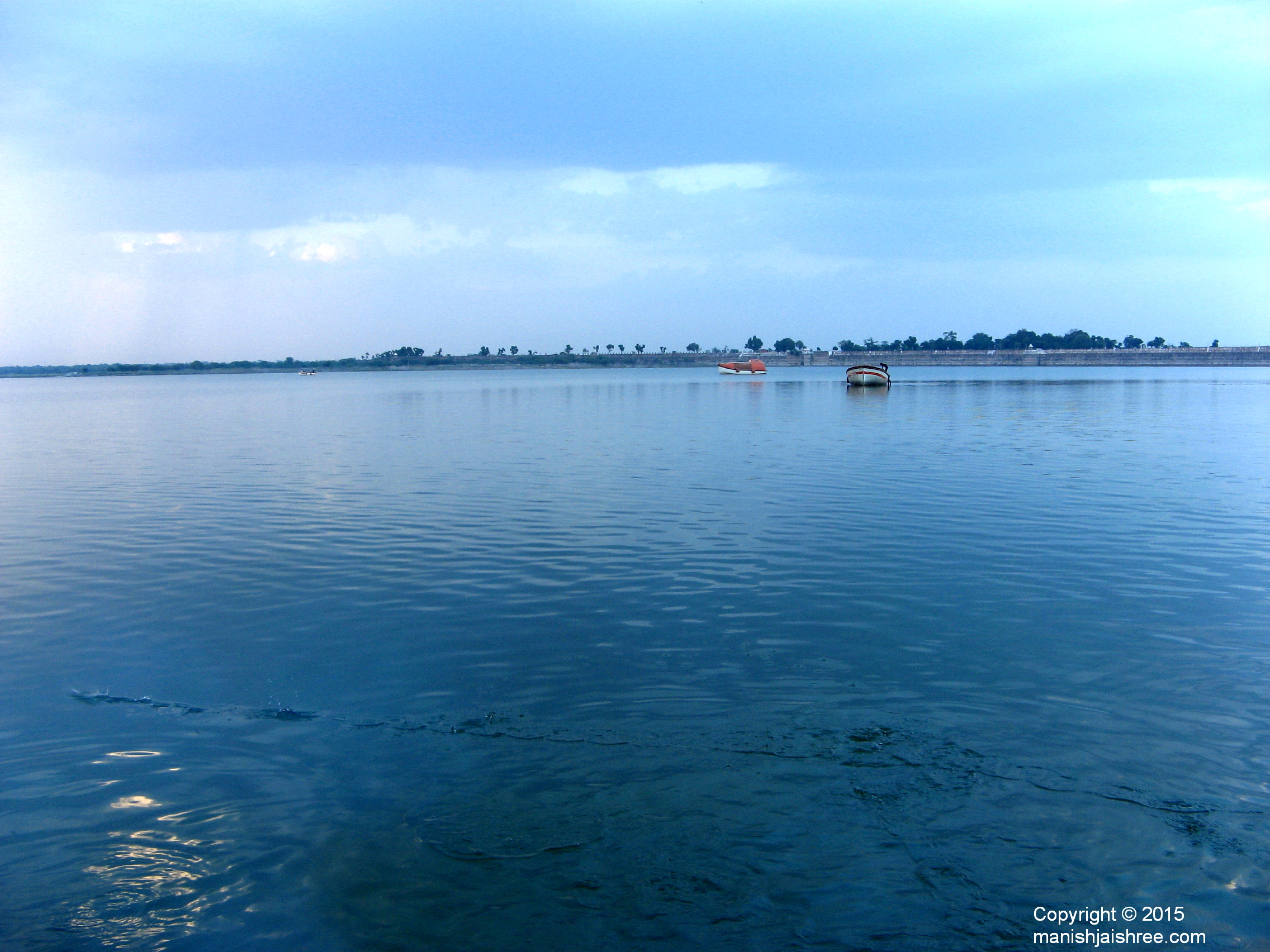 A fish leaving a trail in the water, Rajasamand Lake

Faraway, in the sky, the sun and the clouds were playing hide and seek. The clouds were trying to wrap the sun in their soft embrace like a mother trying to catch her son to make him sleep. While the son-sun was occasionally slipping out, trying hard to come out of his mother’s grip, resisting her, as he still had a palpable amount of energy left in him before the ordained sun-set time. In this struggle of the mother-son duo we were blessed with an interesting skyscape.

Hide and seek between the sun and the clouds, Rajasamand Lake

These days when I do boating, I think that I am doing it for the kids. But I have realized that the silence of the vast expanse of the water broken only by the splashing sound of oars and those several minutes of detachment from the land helps me in detaching myself from worldly worries too. It pacifies and rejuvenates me. In total, it was a refreshing ride. 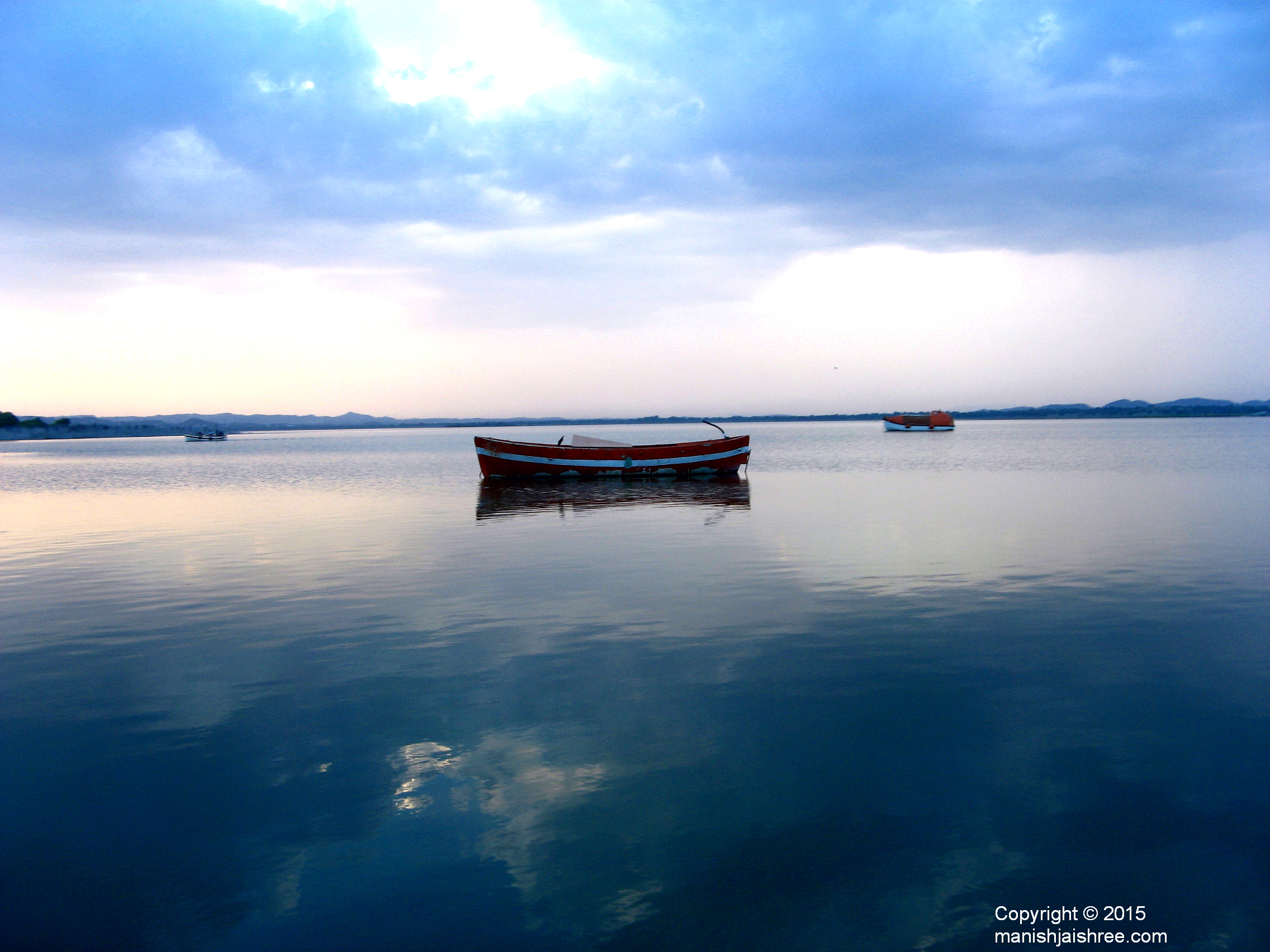 The plan was to travel to Kumbhalgarh the next day morning. So, all in all, it was a blissful build up of the travel tempo. The kids enjoyed it the most, for them the fun had just started. 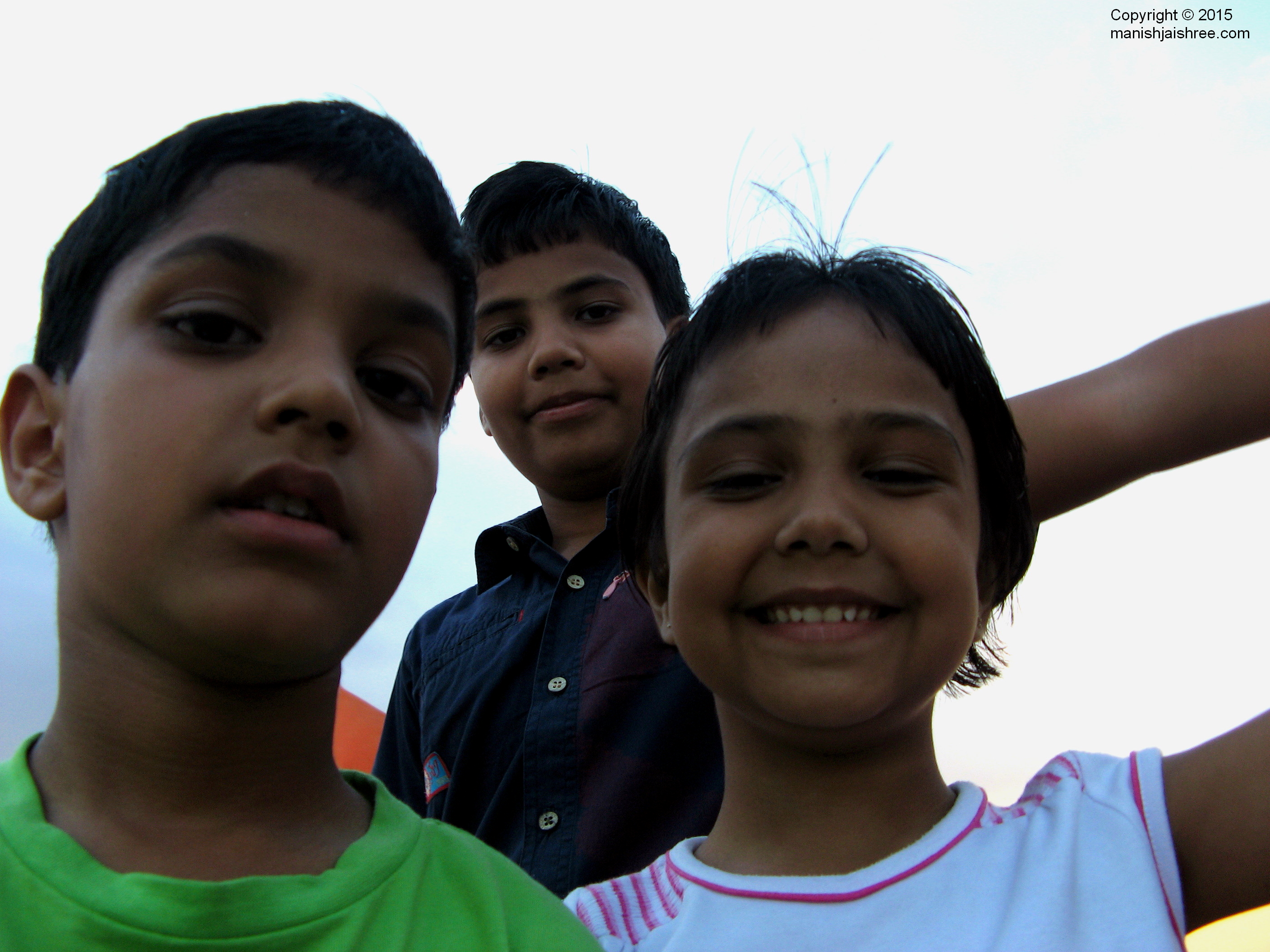 A gradual build-up of the travel mood with an evening in the Rajsamand Lake was last modified: January 24th, 2020 by Manish Khamesra

Before entering the main gate, get off at Mathura Road and enter the lake area. You can take the kids out boating. But you have more serious things to do. You walk towards the looming Talaaqi Gate. This gate like the others is also capped with chattris and protected with bastions. Walk along the ramparts on the right with the rim of the lake on your right. Once the moat probably ran around the fort but now is limited to the western flank. Just make some noise walking so that you do not startle love birds cooing in the bushes.
Shergarh is a sprawling compound bound by walls on all sides. There are three gates: The Western Gate for entering is called Bada Darwaza flanked with mighty bastions, Northern Gate is called the Talaaqi Darwaza or the Forbidden Gate and the Southern Gate is called Humayun Gate. Humayun Gate is the signature symbol of Purana Qila with the two ubiquitous pavilions on top. At the foot is an amphitheatre where the Light and Sound show about Seven Cities of Delhi is played out in the evenings.