It took us unusually long from the exit at NH3, less because of the distance, more out of our own restlessness. And it was not getting any better from the scanty help around road-directions from locals. Albert E talked about it in a very complex scientific way, trying to look for opportunities to refresh my relativity lessons. Anyway, we passed through this giant billboard and could not resist taking a good big picture. We first hit into ‘Tourist Village’, run by MPTDC which appeared very nice and inviting, before we crossed a few more water bodies and headed for our accommodation at ‘Sailing Club’, Madhav National Park. 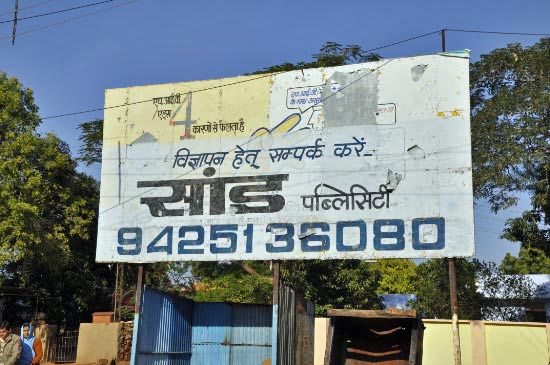 We had booked two cottages at ‘Madhav National Park’ and since there was no advance deposit and no documentation whatsoever, we had to but prepare ourselves for an adventure. In fact, we didn’t even know whether the accommodation is going to be inside the national park. We just got it through a reference and the gentleman suggested we pay once we land there. So there we were, trying to find our two cottages in the big old-world register and it was indeed there. By the time, we realized that what we unwittingly got ourselves into, we were already under the spell of the beautiful place. 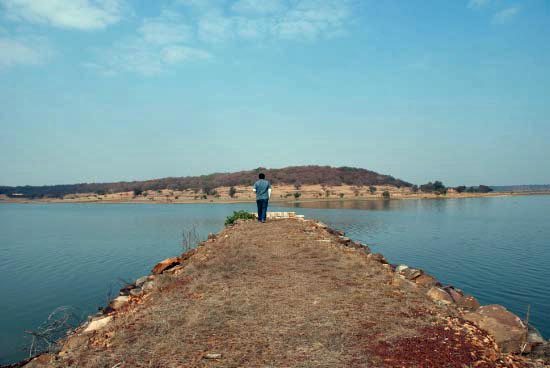 A large, rather a super large water body, an old world club kinda place overlooking it, few and far between cottages, tons of foliage and a big Raj era structure with humble (they looked so familiar after staying in FRHes at Corbett all the time) furniture, a mini-flat size bathroom, all side Verandah, large open space in front and had it not been our aching intestines, we would have missed our lunch. 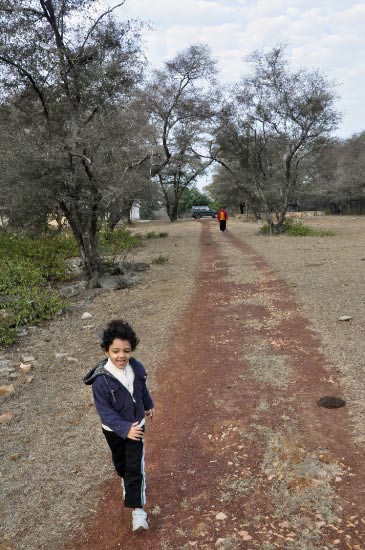 The large water body is called ‘Sakhya Sagar Lake’ and there is another one called ‘Madhav Sagar lake’, created on Manier River in 1918. On the shores of the lake is boat club also known as Sailing Club.

It was beyond 2 or 2.30 PM, when we finally found ourselves at MPTDC run ‘Tourist Village’, which is the first-sought property in Shivpuri. We celebrated the long drive with a good cool drink, polished with few plates of pakodas and finished our long lunch with a sweet cup of tea.

The plan was to go back to FRH (Forest Rest House) and give some rest to our urban bodies, which off-late have refused to see the world at dawn on a normal day and hence were looking fwd to some lethargy. 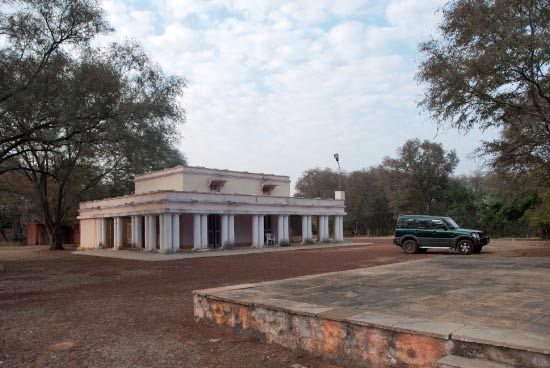 Our accommodation was a little away from the main office, and in that sub-building only two cottages were there, internally connected and it was dark by the time we were done with our late lunch and a quick siesta. Though we had the luxury of electricity with-in the rooms and the Verandah, it was not difficult to sense the dense jungle outside. We took a short walk to the sailing club, savoring uninterrupted serene views of water font under moon light, discussing plans on how we can convert this place into a noisy-club and everything else.On the way back to our cottage, we stopped to inquire about our dinner (made on order) and were pleasantly surprised to find Mr. Khan against the backdrop of a humble kitchen and an equally envious aroma of mutton curry.

After we picked our spirits, we headed back to comforts of our lodge. We tried to kill time over a game of this 3-D scrabble but we lost interest and rest of the evening was spent on intense discussions around changing plans for next day. We had initially planned to do two nights there but since we reached in time, the ghumakkar itch was getting hard to ignore. The general consensus was to move out to Chanderi or some place else. 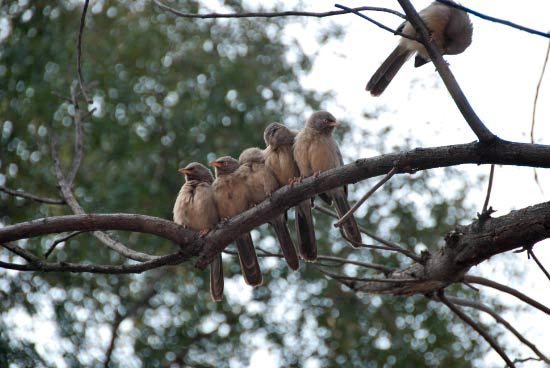 Our morning started with a walk towards the woods and we found this beautiful structure completely camouflaged under the foliage. It was not clean and probably no one ever thought about even making an attempt to put this building on the ‘Madhav National Park’ tourist circuit, the result was that it was all to us.

From the top, one could see far and wide and most of it was the green/brown canopy of the jungle. A few snaps later we decided to explore the park. The usual way of doing the safari is to book a guide from the gate at Rs 400, pay for your vehicle and there is some entry charge per person as well. Its not a very popular park so you don’t see many (we didn’t see any) visitors going for Safari though at ‘Sailing Club’, we did find a lot of day-picnickers trying to get some winter sun.

We were staying with-in the outer periphery of park and it was not difficult to get inside the safari-region so we took the plunge and drove in. 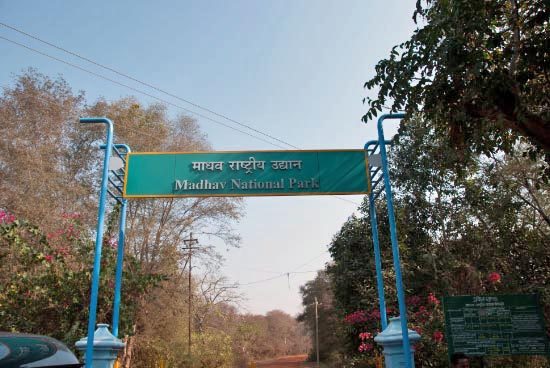 Let me take a small break and give you some insights and information about the park. MNP is spread over in excess of 350 Sq Km, that is what Wikipedia and the book titled ‘Discovering Madhya Pradesh’ published by MPTDC (Madhya Pradesh Tourism Development Corporation) claims though the government website (http://www.shivpuri.nic.in/) mentions this as 150 Sq Km. In all probability this information is not going to impact a lot of you Ghumakkars (its more like a quiz trivia) and I do not believe that many of you are planing to buy some or all of it, just in case they decide to create a housing project out of it. The park has a long history and its been said that while returning from Mandav, Emperor Akbar captured a herd of elephants, in 1564. The park is not dense/thick which elephants need (its unlike Corbett, Rajaji National Park etc), its not as dry as Sariska or Panna though but if that elephant story is true then a lot has changed in terms of flora, there is hardly any fauna, over time. Its more of a dry, deciduous stretch with large grasslands around the lakes.

Leaving the present behind, there are enough stories around tiger hunting, especially during Scinidia’s time. Post Independence, the park became a free for all gaming site and it was only in 1959 when it got the status of a ‘National Park’, thus bringing some order. There have been many attempts to nurture the tiger population after that but not all were successful. As of today, there are no tigers left.

So we took our car in and tried to remember tracks, you do not want to get lost in jungle, as we drove along. Usually the safari tracks are in a pattern and they often diverge to meet again and if you are a driver-type, its not too long to figure out the topography. After a while we reached the great wall which was holding this big mammoth ‘Sakhya Sagar’ lake, climbed up and savored some of the great uninterrupted view of the big water body. On closer scrutiny, we could sight cranes, and a lot of colorful birds. While there is no wildlife, a jungle has this enormous calm, a solitude to which one can surrender, with love. Yeah, that was philosophy. Read again if you really love it. Quote it, if you really really love it. 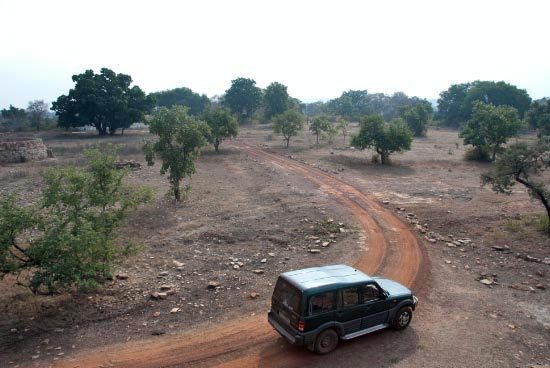 We spent around 2 hours with that big jungle all to ourselves, stopping multiple times, engaging in animated discussions and then falling silent, somehow time stops moving and its hard to imagine that how we did all that in just 2 hours. We settled our accounts at the one-room office, which was Rs 900 for a night per room, inclusive of all meals and headed for the other attraction of Sipri i.e. ‘Cenotaphs’ or The ‘Chhatris’.

These are the cenotaphs, popular for their architecture, brilliant stone work and they appear more like beautiful smiling white flowers waiting to greet you.

I am very poor at detailing structures so I would let the pictures do the talking. If you are in Shivpuri, do not miss them (though they do not deserve a trip all for themselves). 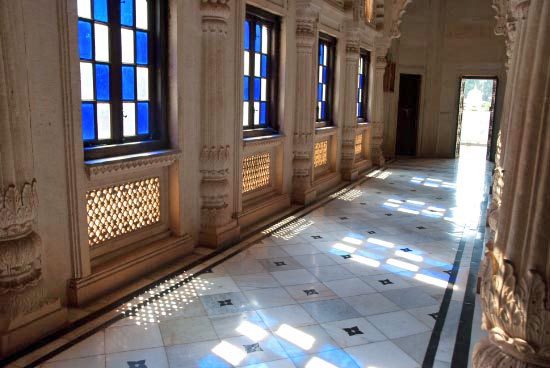 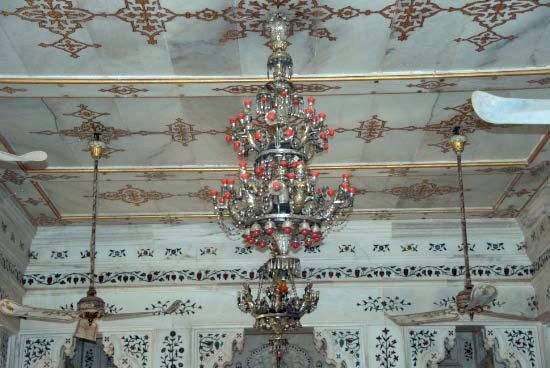 The whole area has a few temples, large well-manicured green lush lawns, clean walkaways, a water tank which had much less flith than what you see at most of the places, benches for you to relax and a very non-rushed ambiance.

There are some Samosa, Pakora, Chai shops right outside the Chhatris for the adventurous. We drove a little inside the city to have our lunch before we made the move to ‘Chanderi’ , where we met weavers. That would happen shortly, till then enjoy Sipri.