I was restless for quite some time as more than 180 days passed without a single trip in our car. Thanks to Swine Flu because of which we canceled our trip to Pune 3 months back. I was planning for two days trip to Shravanabelagola, Belur & Halebid as Saturday was a holiday for me. My parents were adamant not to miss my nephew’s Birthday, so we decided on a Day trip to Shravanbelagola. 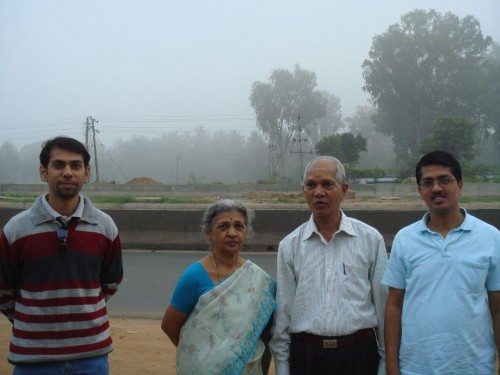 When my cousin Sharat came to know about our plans, he decided to join us on his recently bought second hand bike.

Sunday, 29 November 2009, 6:00 am
My mother was very happy because she had been longing to visit Shravanabelagola for quite some time (Since we have shifted to Bangalore 2.5 years back). 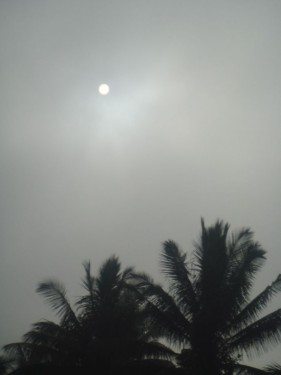 We started exactly at 6:00 am after my cousin came on his bike at 5:55 am. We reached Yeshvantpur within no time and from there we hit the traffic. We could cover only 30 kms in the first hour and when we saw a nice hotel “New Agarwal Bhavan” we decided to have our breakfast there. The food was hot and good, may be because the hotel was new and trying to establish themselves.

Resumed our journey at 7:30 am and within 15 minutes we reached NH-48 crossing and took left towards Mangalore. From here the drive was cool and exciting with the fog cover blanketing the surroundings giving a feel of driving in the clouds. It made me more alert as the visibility was hardly 20-25 feet with headlights on as we were travelling on single side of the road (Double road work is going on and it may still take another year for completion). The Sun was looking like Moon. We crossed Solur at 8:10 am, Kunigal at 8:40 am and Vadiyur at 9:20 am. 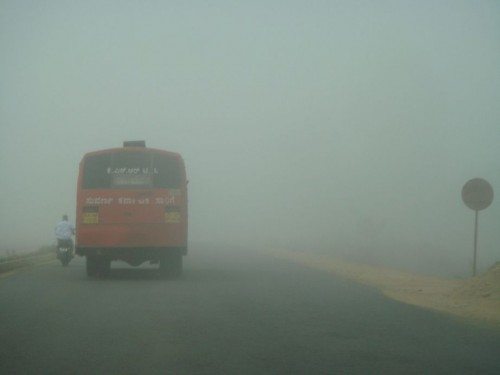 Just before we reached Nelligare, Vatsalya started giving me those dangerous signals that it’s high time I handover the car to her and sit meekly in the passenger seat and I obliged helplessly at 9:20 am. From here Sharat’s bike started giving trouble and we lost lot of time in keeping him in sight in our rear view mirror. We had to take couple of breaks as his bike used to stop after every couple of kms and starts only after giving a 10-15 minutes break. Finally, Sharat made up his mind to get it repaired in some village and asked us to go ahead. We decided to meet at Shravanbelogala and resumed our journey. We crossed Nelligare after paying a toll of Rs.5/- and reached Hirisave at 10:10 am where we took a left turn towards Shravanabelagola. From here the road is narrow and uneven. The 16 Kms stretch took us almost 40 minutes. There was no empty parking slot and we had to park some 300 meters away from the entrance. 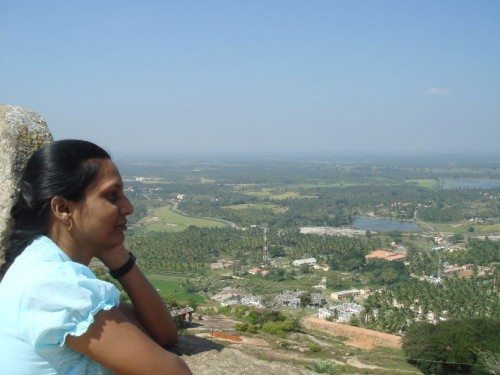 We left our footwear at the bottom of the hill and started the climb at 11:30 am. The weather was perfect for the climb. Even though we were fully prepared for the worst by wearing socks and caps, we decided to remove the socks because of the cool weather. The climb gets tougher as you go up. We climbed the 650 odd steps and reached the top at 12:30 pm. The view around during the climb is amazing. On reaching the top, the view is simply breathtaking with the beautiful towering statue and carvings all around you. Every pillar has some work of art. 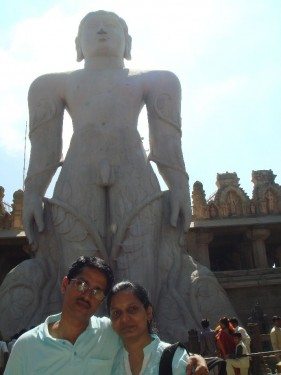 We took a lot of photos there and started our climb down which was much more difficult than climbing up. 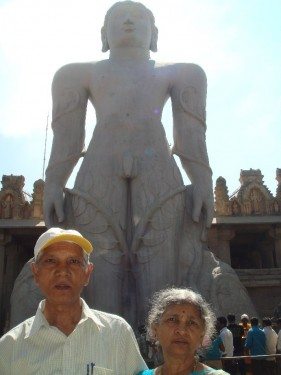 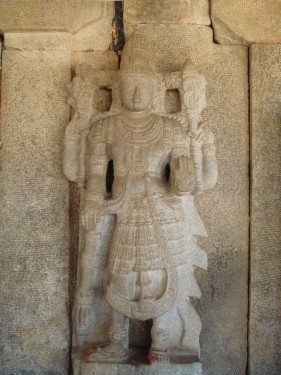 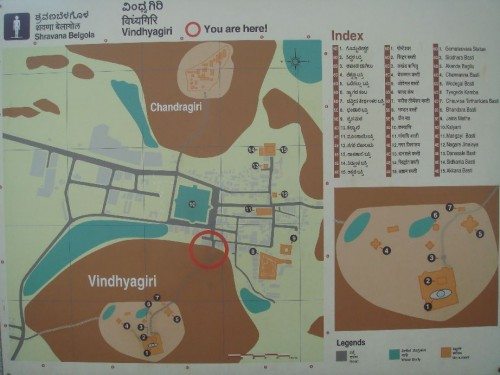 By the time we reached down it was 2:10 pm and we decided to have lunch in one of the dhabas on our way back. After we crosses Hirisave we stopped at “Andhra Dhaba” where we called Sharat who was enjoying the nearby beauty after getting his bike repaired. The food here was good eventhough the atmosphere there was pretty average and the service was very slow.

From here Vathsalya started driving till Nelamangala where I took over as the traffic was very heavy. It took more almost 3 hours of cursing the BBMP and the idiotic drivers who makes matters worse by not following lane discipline. The Bangalore evening traffic always makes me think whether I should stop driving my car and use Public Transport for my trips (But only till my next trip). Finally we reached home at 8:15 pm when the KM Reading for the trip showed 298 kms.

Some interesting details of the statue I collected from net :

On top of the hill called Vindyagiri stands the 17.38 m tall monolithic statue of Gomateshwara Bahubali. Lord Bahubali was the second of the one hundred sons of the first Tirthankara, Lord Rishabha who is believed to have lived several thousand years ago. Gomateshwara is the world’s largest monolithic stone statue. It was erected by Chamundaraya (AD 940-989), a military commander, poet and a minister in the court of king Rachamalla of the Western Ganga Dynasty (AD 350-1000). On the base of the statue are inscriptions in written Marathi that dates to AD 981. The statue was erected for the general’s mother. Every twelfth year thousands of Jains congregate to perform a ceremony in which the statue is covered with milk, curd, ghee, saffron and gold coins.

Bhagwaan Rishabh Dev the first Tirthankar of Jains had two sons, Bharat and Bahubali. When Rishabh Dev renounced all worldly desires, he passed on his kingdom to his sons. However Bharat was more demanding and desired that Bahubali should concede his share, so that he could become the supreme ruler of the world. Bahubali refused, but before their armies attacked each other, their intelligent ministers suggested that both of them should engage in hand to hand combat to avoid unnecessary bloodshed of the soldiers.

There were a series of duels, like the water duel where the brothers stood in knee deep water and sprayed water on each other, the sight duel when they had to stand in sun and stare at each other. The one who blinked first lost. Bharat was constantly losing the duels. In the final round of wrestling Bahubali picked up Bharat, whirling him around in the air, he was about to throw Bharat down.

Just that moment a thought crossed his mind, “Such pride is false. What good is being a king or a supreme ruler of the world? Such desires are endless. Fulfillment of such desires cannot lead to peace of mind.” He gently put his brother down on his feet. He renounced his kingdom and set out to seek true happiness. He spent many years in meditation and penance. According to legend, he stood meditating for such a long time that anthills formed on the ground where he stood, snakes lay coiled at his feet and creepers grew around them.

Chamundrai, the prime minister of King Rachmalla II of Ganga dynasty, built a colossal statue of Bhagwaan Bahubali. It was consecrated under the guidance of the great Acharya Nemi Chandra Siddhant Chakravarti in 981 A.D.

Steps to the sculpture : 650 steps

Trip to Gomateshwara Bahubali in Shravanabelagola was last modified: February 19th, 2020 by prhebbare

No, not Tiramisu, but definitely more delectable! Borobudur Temple in Magelang, near Yogyakartha (Indonesia) made to look like a layered cake with history seeping…