It was during early December of 2011, i.e. more than the period of six months, when I last shared my story. Since then though I had visited the site many a times and observed it to be flourishing in with invigorating sharing of stories and very informative and inspiring, indeed, to the core. And also there is a list of stories and writers whom I admire most.

During this gap of six months, despite I did remain a Ghumakkar, at least some 15 times visiting New Delhi, 7-8 times – Lucknow, 3-4 times – Trivandrum, 2 times to Mumbai and further once upto Shirdi & Triambakeshwar and once upto Bhimashanker and also once to Goa (Personal & Official tours all inclusive), I could not share those here not for want of time or I was very much busy. But for the obvious reason of my lackadaisical and sluggish approach, which I do enjoy since my childhood, ever inspired by those famous lines, “Aaj Kare so Kal kar, Kal kare so Parso.. Abhi se kya karna yaron Abhi to jiyenge Barso..”. Astrology, has also been one of my favourites. While examining, I do find only the leave application of Mars, the planet responsible for bestowing activeness, in my horoscope. Secondly, whenever I visited the site, I did find my name very well within the Top 99 Authors having 4 stories to my credit, and was well contended and reassured as “Dilli to Abhi Door hai…”. But now when I find my name almost poised to be exterminated from list, I could not dare to further pay any regard to those esteemed words and am reverting back with the story on my recent visit of Srisailam.

For the last one year I had been planning to visit Srisailam to have darshanam of one of the Dwadash Jyothirlingas, Mallikaarjun Swami and got realized that it is very well said that for visiting some religious place of importance/pilgrimage/shrine, the time is destined. I got reservations done earlier on two occasions, once in Oct.’11 and March’12 but for some pretext those could not materialize. I planned again to visit the place during my off days, to avoid availing leave. We are provided two days off for rest after a night duty. After performing the night duty on 10th of June, I proceeded by Jan Shatabdi Express train, in the morning of 11.06.12, for Ongole from Chennai. I got my tickets booked in 2S (tkt fare Rs. 112 for 292 kms). Here, before advancing further, I would like to share with what I have resolved into. But for the official tours, and subject to the bearable climatic conditions and moreover when I am a traveling alone, I prefer traveling in Sleeper or Second Seating class to that of 3A or CC, by which I treat myself deemed to have traveled. A fund is created from this difference which can be contributed to some genuine charitable organization working for valid cause of the deprived ones viz. CRY and alike. For a penny-pincher person like me it is really very hard to part off my earnings for them. So I find myself comfortable enough with this devised plan envisaging cutting off a little luxury. For eg. In the instant journey the CC fare is Rs. 365 and a difference of Rs. 253 can be pooled into that fund.

Around 1130 hrs I reached Ongole Railway Station and took auto for bus station (shared auto fare Rs. 8). Near Bus Station I went to a restaurant and had my lunch. Here I would mention that it is quite hard to find Jaini meals in South India. If one is going to ask for it, the manager there will simply refuse and say that there is nothing to offer without Onion and Garlic. Hence it is advisable to ask specifically for some recipe which do not include Onion and Garlic at all. For me, I use to take Curd Rice and Chapatti with Coconut chutney. From Ongole direct bus service for Srisailam is available but for that I had to wait around an hour more so I preferred Markapur bus from there. For Markapur, on the way to Srisailam, frequency is more. It took around 2.5 hrs to reach Markapur with the Bus fare of Rs. 59. From Markapur there are buses almost every half an hour for Srisailam. Immediately, at Markapur I got bus for Srisailam. Though the distance from Markapur to Srisailam is comparatively less but due to hilly tract the bus took the same time i.e. around 2.5 hours with Rs. 60 as fare. As Srisailam is located in Nallamala hills of Kurnool district, one can evidence forest all around while on the way to Srisailam. These Nallamala hills are abode of different wide species especially tigers. 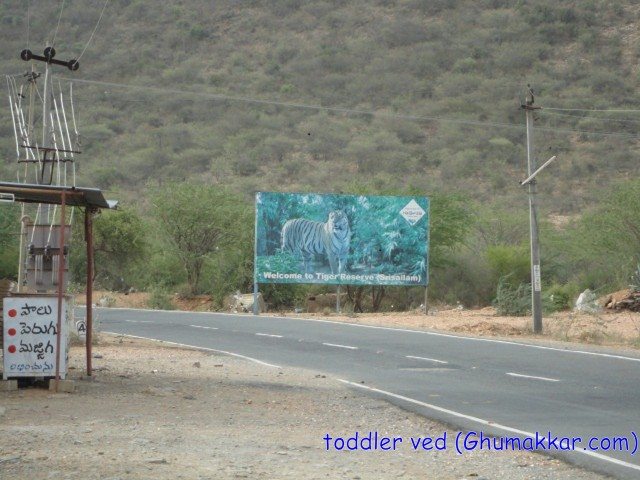 On the way to Srisailam- After some distance from Markapur, starts Nallamala Hills

Reached Srisailam around 06 in the evening. Went to Srisailam Devasthanam office at Ganga & Gauri Sadan for accommodation to find that they are not providing rooms to someone single. After struggling a bit reached Zila Parishad Guest House, there also the Manager though, stating that in Srisailam single persons are alloted in any of the guest houses, was bit hesitant too but on my persistence he agreed but before that he made me to phone call my wife, there at Lucknow and ensured himself that she do not have any problem with my vist of Srisailam. I was alloted with Room No. 3 on the first floor of the Guest House which was good enough. I had to pay Rs. 600 for a day’s (check out 24 hrs’ time) stay. After checking in, I had bath and proceeded straight for the darshanam of Lord Mallikarjuna Swamy. The temple was nearby to the guest house and darshanam is allowed till 10 PM. There was not much rush though on Mondays there use to be some rush in Lord Shiva’s temples. Nevertheless, I took quick darshanam ticket of Rs. 50 and within 20 minutes I was able to have darshanam of the Lord. Just behind the Mallikarjun temple,in the same campus, there exists Bhramaramba Devi temple and had her darshanam also. 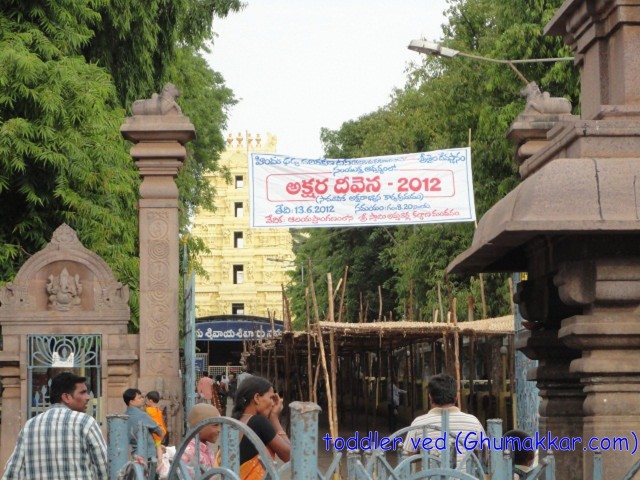 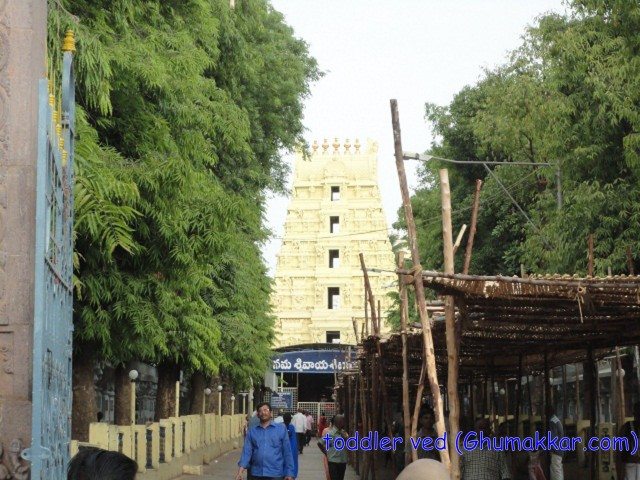 The legend behind this Jyothirlinga is said to be that once Lord Kartikeya became annoyed on Lord Ganesha and ran away. Lord Shiva and Parvati came to this place following their son, Lord Kartikeya. Lord Shiva assumed himself in the form of the Jyothirlinga and both Shiva and Parvati started residing here. Mallika being another name of Parvati and Arjun being another name of Shiva, hence was called the Jyothirlinga as Mallikarjun Swami. Whereas Bhramaramba Devi is the name given to the Shakti and at the place, where the temple is, fallen the neck part of devi Shakti, lifting whose dead body Lord Shiva performed Ugratandava in anger. This place is one among the Astadasha (eighteen) Shaktipeethas as enunciated by Adi Shankaracharya. The relevant sloka for this Shaktipeetha is as under:

Thus the importance of the place, Srisailam is further enhanced in view of the fact that there exist one of the dwadash Jyothirlinga as well as one of the eighteen Shakti Peetha and moreover that too in the same temple premises. The present stature of temple and its fort like structure was given shape during the reign of King Harihar Raya of Vijaynagar kingdom, little over six hundred years ago.
After having the darshanam I went further to have another dose of Curd-Rice as my dinner and retired back into the guest house by around 10 PM. Here it will not be out of context to mention that, during all through my South India exploration, I, helplessly with no other go, adhere to the prescription of Curd-Rice t.d.s. (ter die sumendum viz. three times a day) all over and irrespective of fact whether it is breakfast, lunch or dinner.

Whenever I am bestowed with the opportunity to explore, would like to fully exploit it. However am associating myself with visiting the places having religious and historical significance. Belonging to Allahabad/Lucknow of UP presently i m posted at Chennai.