On the 21st of March, 2002, I had been to Coimbatore to write a test at the Bharathiar University. The test got over at 1100 and I had almost a day at my disposal as I was booked to return home on the 22nd. I decided to spend some time sight-seeing as this was the first time I had come so far south.

On enquiring at the Tourist info desk, I was suggested a place called Shiruvani, sporting a small waterfall and a dam. It was about 37 kilometers from Coimbatore Bus Terminus; an allegedly half hourly bus service connected the place to Coimbatore. I was told that those buses had “SHIRUVANI” written on them, only in Tamil, as I later learned to my chagrin. However the Tourist Office fellow told me that on account of people using the Dam top as launch pad for the other world, entry to the top of the Dam was restricted.

I deposited my suitcase at the Railway Station cloak-room and arming myself with all the cash I had, my water-bottle, and the camera in my little back-pack, I set off. In the city-bus,I met a fellow Bangalee, who told me that Shiruvani would not be worth its while, because it being the lean season for the falls, not much water flow would be there. He also told me that they usually went to Ooty 2-3 times every year and that it was just 3 hours by bus from Coimbatore. I kept his idea in stow in the event a “Shiruvani” bus did not come.

I waited for a Shiruvani bus at the Terminus for some 20-25 minutes. Having by now discovered that everything except the license plates and the Bus Route No. were written in Tamil, and having confirmed that “Shiruvani” Buses had no Nos., I gave up Shiruvani as a lost case. Then I asked a bus conductor about buses to Ooty. He gave me direction and distance to the Long-distance Bus Terminus in incomprehensible Tamil ! However I did find it after some effort. As I reached that bus-terminus and boarded a bus preparing to push off to Ooty. It was about 1310 then. The bus eventually left at about 1330. On learning that the hills began some 60 km later, I promptly went to sleep !  When I woke up, Mettupalayam (41 km from Coimbatore) had passed, and hills had started. I cursed myself for going to sleep (though I had awoken at 0400 ). I was sitting in the bus along the aisle; I exchanged my place with a fellow who was sitting just at the bus entry, to get a better view for myself as well as for the camera. I took some 2-3 pictures from the bus, while it was moving, because the speed was very slow and I was shooting at a distance. Views were good, but more welcome to me was the dip in the temperature, for Coimbatore had been oppressively hot. 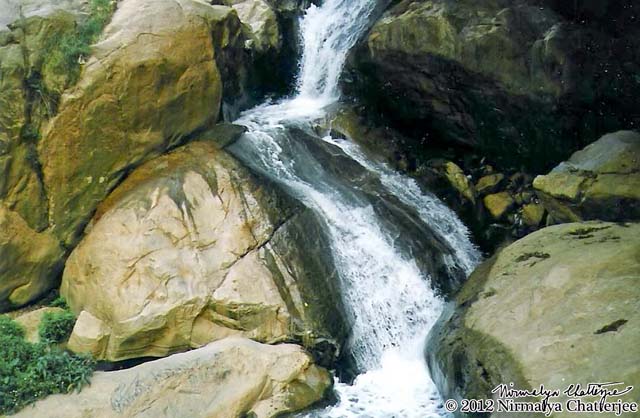 Rushing through the rocks

Then the bus stopped for some ten min at a place called Burliar, where there is a State Horticultural Garden. Just before Burliar Bazaar, a stream rushes under the road, I went to take a snap of it, there I met a few monkeys who grinned (or may be snarled) at me, I made a repartee and came back. The Coonoor Regimental Encampment (along the hill side) with their maidan and race-course. (Those Services fellows live in real comfort during their off-duty !!).We reached  Ooty bazaar at around 1640. The Ooty Botanical Garden was about 3 km on, and the Lake about 2 km from there. I was keen to visit them, but expecting both to close for the day within the next hour, I decided that I would give them the skip.

Now as only two hours of daylight were left, I settled for walking along the main road and the short by-roads, towards Coonoor and then board a bus for Coonoor at nightfall and spend the night there. I bought bread, biscuits and a jar of jam at a shop, gobbled a pastry, seized a bottle of Nilgiri Eucalyptus Oil for my Ma, and set out. I finally ended up walking till 1930 , a distance of about 13 km. I wandered amidst pines, larches and streams and indulged myself in photography.I finished up the loaded film roll with a sunset shot through pines. My hand picked branches of pine, larch and one unknown conifer to take home.The very act of breathing mountain air was heady and the smell of the resinous conifers intoxicating!! 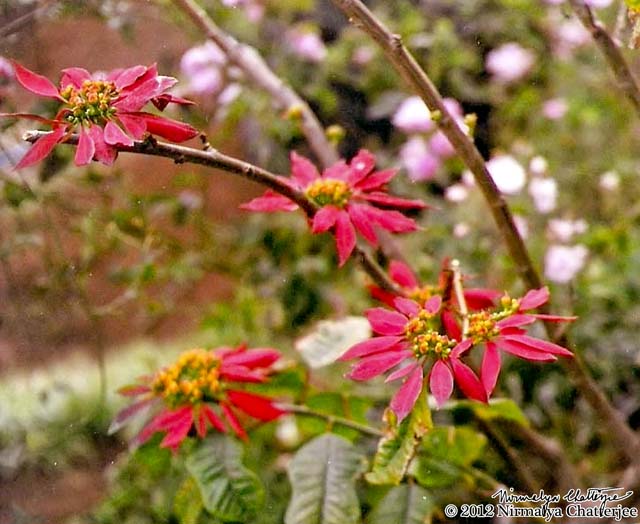 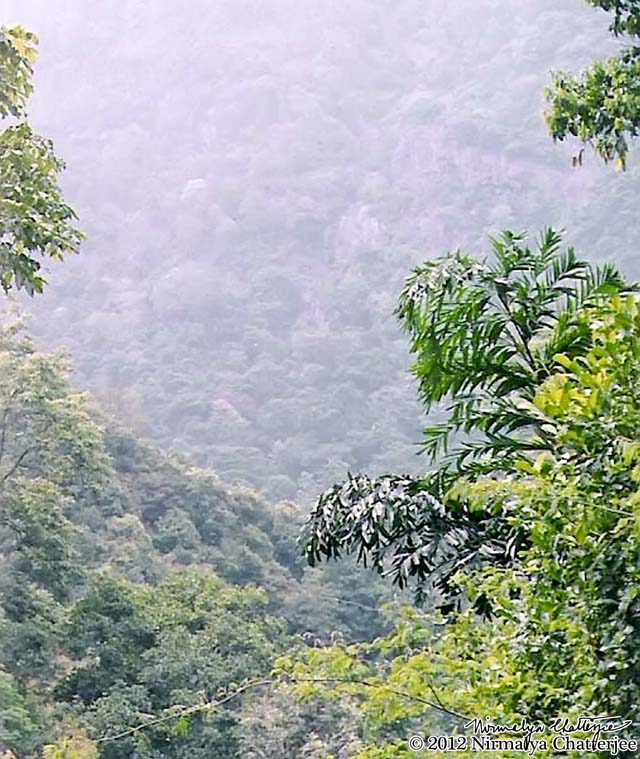 I explored the hill-sides along the road looking at flowers, trees and occasionally the habitations along the road,perched diligently on the sloping terrain.The panoramic views of the valley below enamoured me, though no Tourist Department had christened them with clichéd names. The Nilgiri Mountain Railway track was in full view from the road above and it was lined at places with quite a few stately pines ! 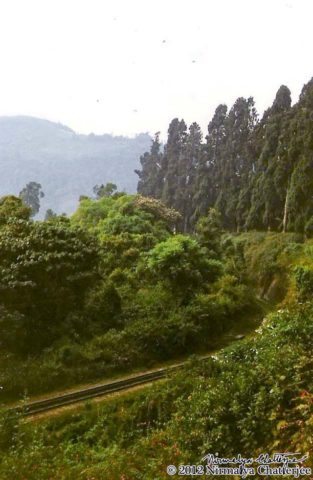 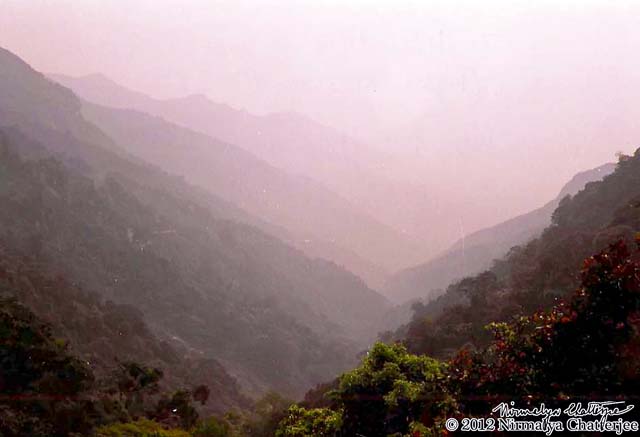 When I reached Aruvankadu at 1930 ,it was already dark and my legs were crying for attention. But I told them to shut up and trudged on till I reached the Cordite Factory. Eventually a bus going from Ooty to Mettupalayam came, and transpored a grateful me to Coonoor, 5 km away, in just 15 minutes!

En route I had asked a local about cheap lodges in Coonoor, and he intimated me of one Shri Ramchandra Lodge, which was okay and was near the Bus stand. I enquired and took my lodgings there at Rs. 80 a day. Then I went to the Shri Ramchandra’s eatery and finding nothing better (all veggie, though I felt I could eat 1 whole chicken, somewhat like Obelix and his little Boars) had 3 very large Chappatis (smeared with ghee) with that ubiquitous sour tasting curry in which a few peas occasionally roamed, an almost bland (faintly sweet ‘n’ sour) paste of coconut and haldi and a spot of pickle which to me seemed to be made of minuscule capsicum like objects.I topped it off with a sweet resembling the Bengali goja but on eating seemed to be a mix of besan, sugar,  a little yellow food colour and very little else!

I went to a photography-shop and bought another roll of film (a Konica – Rs 80), and inevitably felt cheated (because the fellow asked Rs. 100 for a Kodak one, whereas they cost Rs. 65 and 75 respectively in Calcutta).

Twilight on the road,

Next day, I set out at the dawn. It was reasonably cold, though woollens were not a necessity, at least for me. It was however cold enough for your breath to condense before your eyes. My train from Coimbatore to Chennai was at 1340 hours, so I decided that I would walk towards Burliar from Coonoor along the hill road till 0900  and then board a bus for Coimbatore midway. I started off at 0630, and walked in the morning, exploring the Nilgiri mountain railway track (which at places runs near the road), took pictures of various trees in full bloom. There were many hair-pin bends on the road, I crossed about five. The view from each was subtly different. 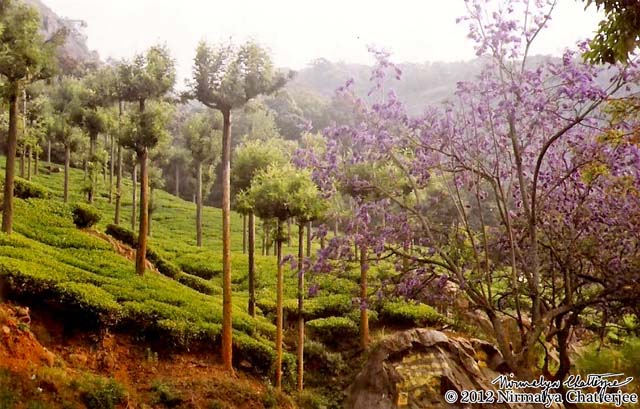 Just outside Coonoor town limits, I had the good luck to find a few giant pines, probably 100 feet tall. I chipped off a small piece of their old scarred bark and instantly the surroundings were filled with that incredible scent of the mountains, so different and refreshing unlike the choking smokes that our urban life provides.

At about 0905 I was near a roadside tea-stall, Burliar was still some 10 km away. So I paused there for some minutes, hoping to hop on to a Coimbatore bound bus,and one came within ten minutes putting an end to my first affair with the Mountains of Southern India.

One Day Trip to Ooty-Coonoor was last modified: January 12th, 2021 by Nirmalya

Nirmalya is a soil scientist currently working at the Washington State University near Seattle, WA, USA. In the future he intends to go back to India to work on soil and water conservation issues in marginal and forested lands for improving agricultural and forest productivity and improve their management through scientific techniques, in an effort to improve the socio-economic conditions of tribals, marginal agriculturists and rural people.

While we were at Sangla, we were suggested to drive down to a small Himalayan village on Indo-China Border as a day outing. It…