We started by 9 AM from Tapola and had to pass through Mahabaleshwar. We reached Pratapgarh by 11 AM and it already had a large crowd. The Dusherra long weekend is favorite time for tourists to be out. We chose to have a guide who assured us that we can cover the fort in 1.5 hours to have enough time. The guide was very knowledgeable and narrated stories of Shivaji’s era and the heroics and exploits of his time. This fort is famous for encounter between Shivaji and Afzal Khan where Shivaji out smarted him and killed him. The story of this encounter is a legend and part of text-books so known to everyone raised in Maharashtra.  The guide was narrating the story in chaste Marathi and it was delight to hear him. One could make out certain exaggerations because of the legends having been retold over the years but it was enjoyable. There is a larger than life statue of Shivaji riding his horse at the top of the fort. There is another vantage point of the fort which looks over a forested valley called Jawali-che khore (meaning valley of Jawali forest) where the battle with Afzal Khan’s army was fought. The small house where Afzal Khan stayed while attacking Pratapgarh and where the actual meeting took place and Shivaji killed Afzal Khan is still preserved. The remains of Azfal Khan are buried over there. 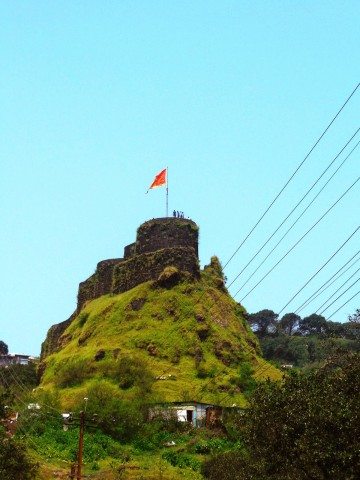 Pratapgarh fort from a distance 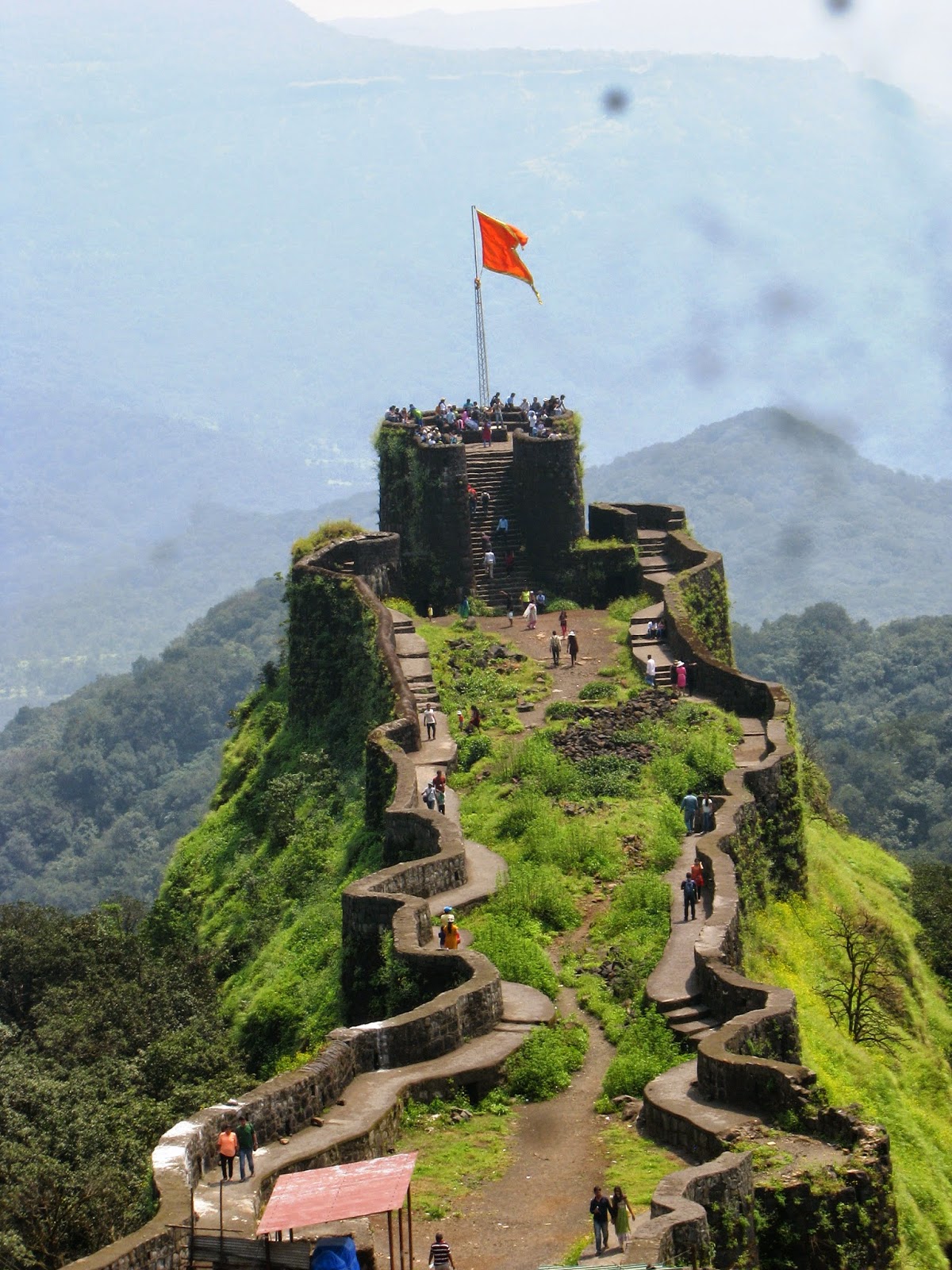 The iconic burj of Pratapgarh fort with flag of Hindavi Swarajya 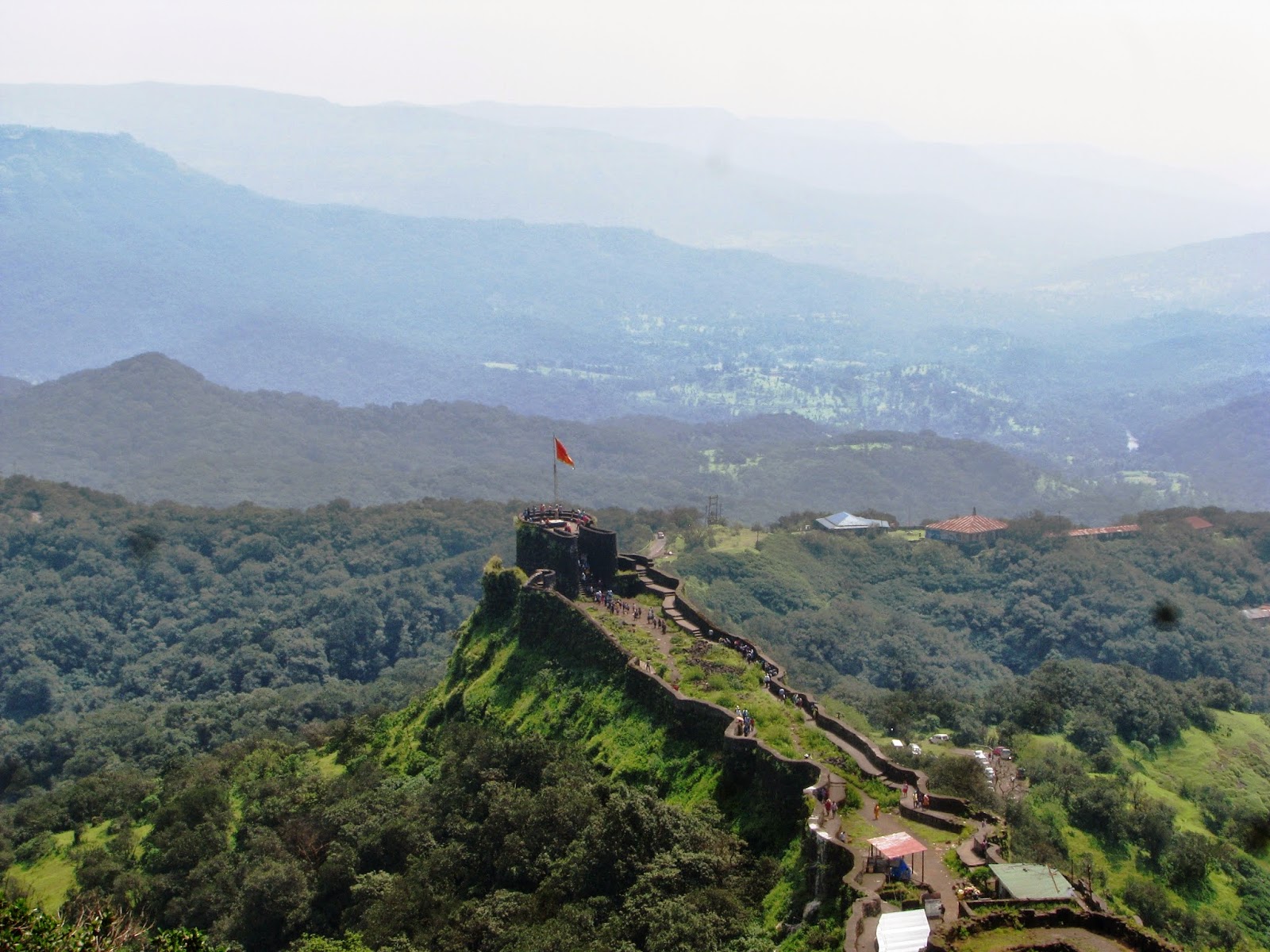 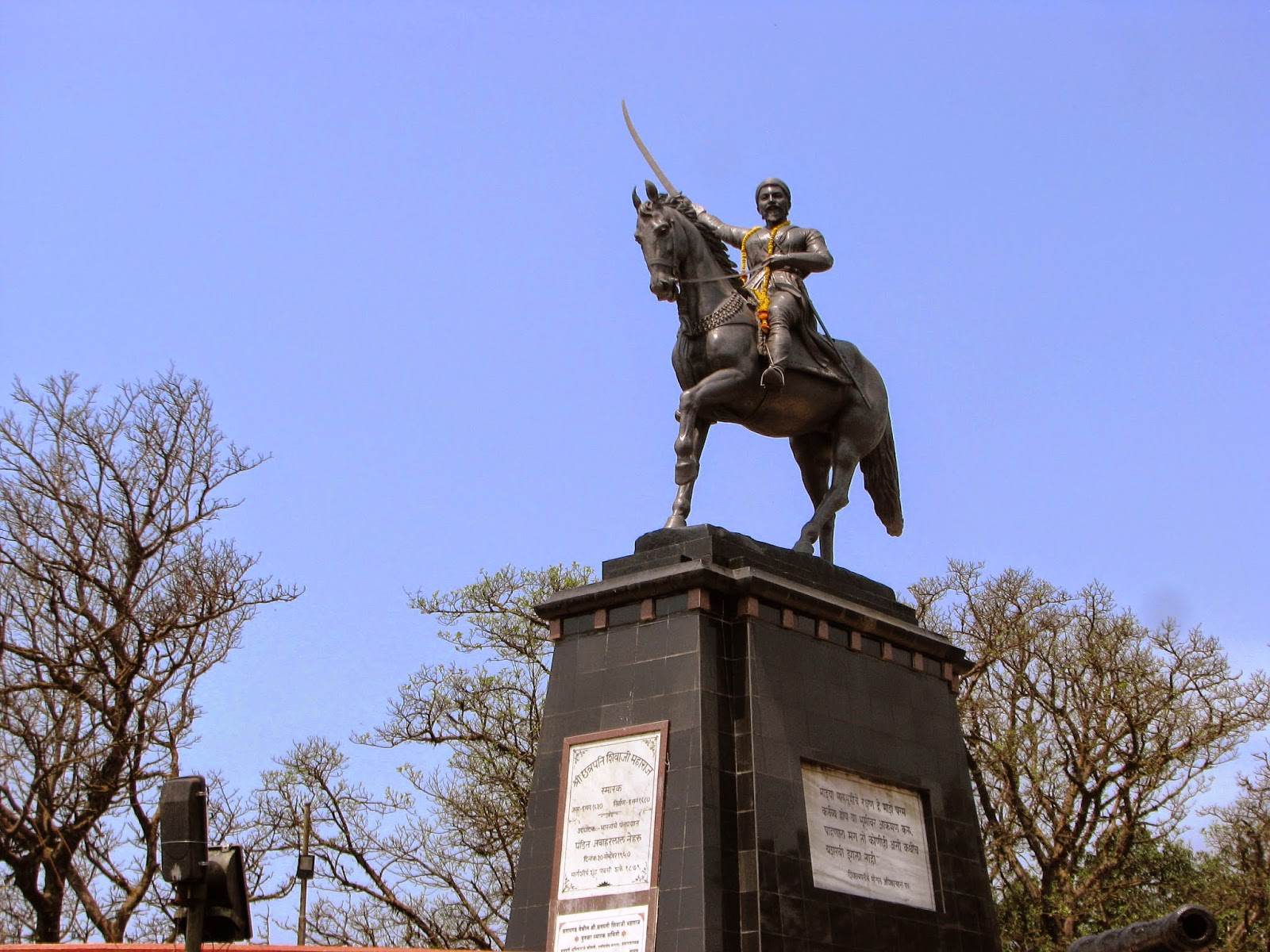 Statue of Shivaji inside Pratapgarh

We left Pratapgarh and drove to Raigarh via Mahad. Mahad is a town on NH-17 Mumbai-Goa highway. Raigarh is 23 kms from Mahad and is interior in the countryside. The fort itself is not easy inaccessible. One has to either trek for four hours or there is a ropeway which takes one to top in 5 minutes. Due to this easy way most of the people take ropeway but due to limited capacity one has to wait for their turn. The charge is 200/- per person. We reached the foot of the fort by 3 PM but had to wait for 45 minutes for our turn. 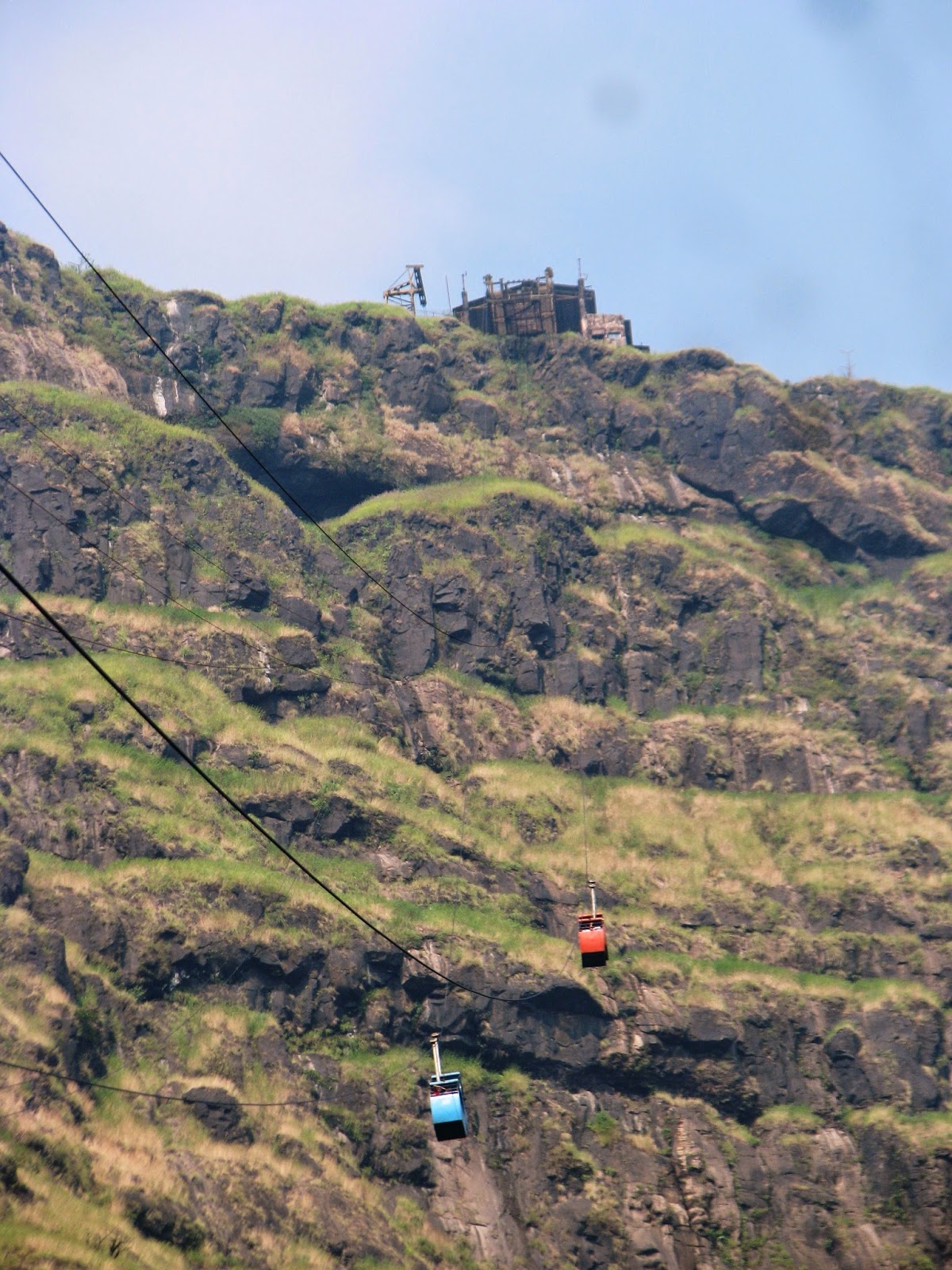 Ropeway to Raigarh. Notice the station at the top 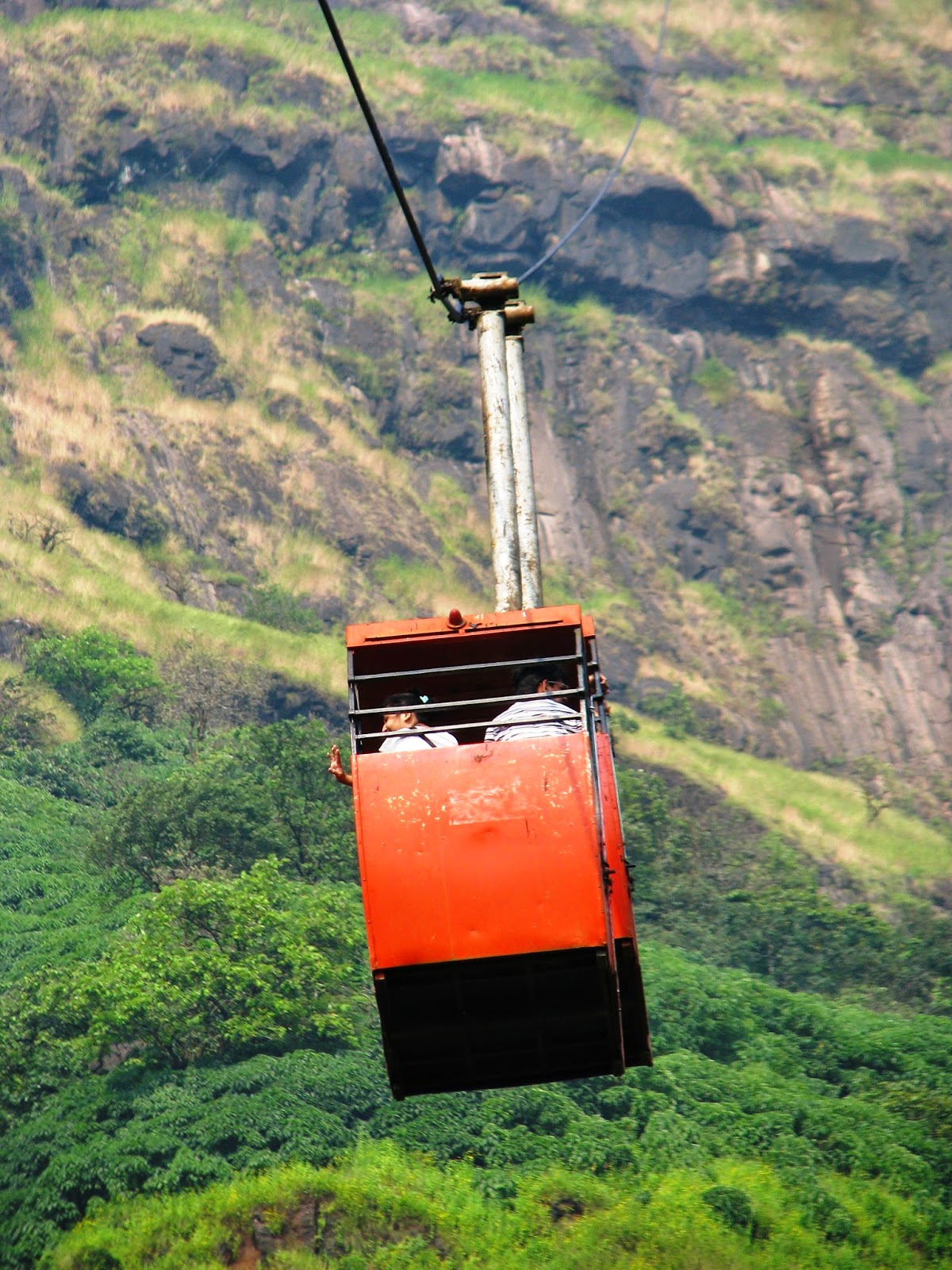 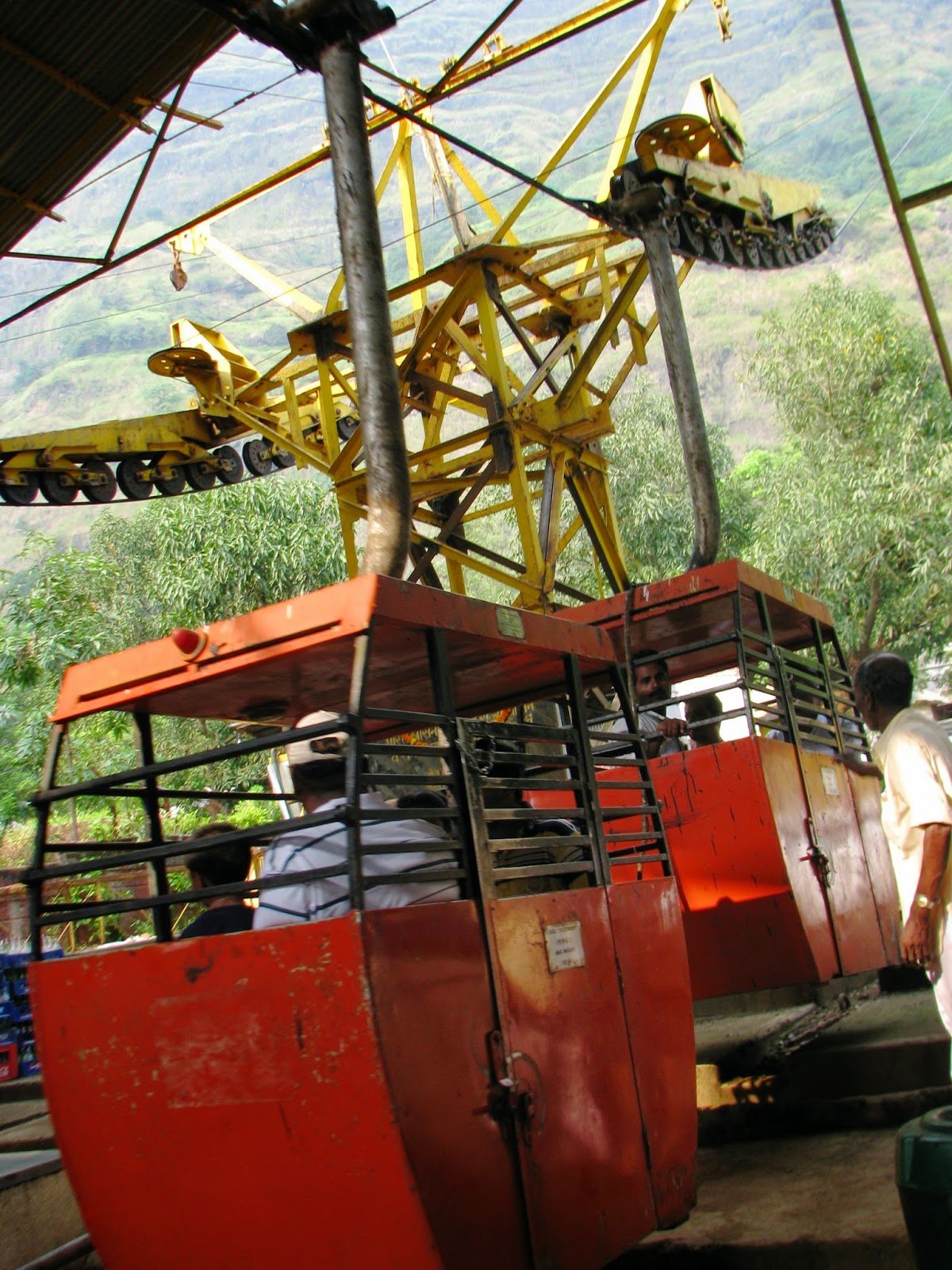 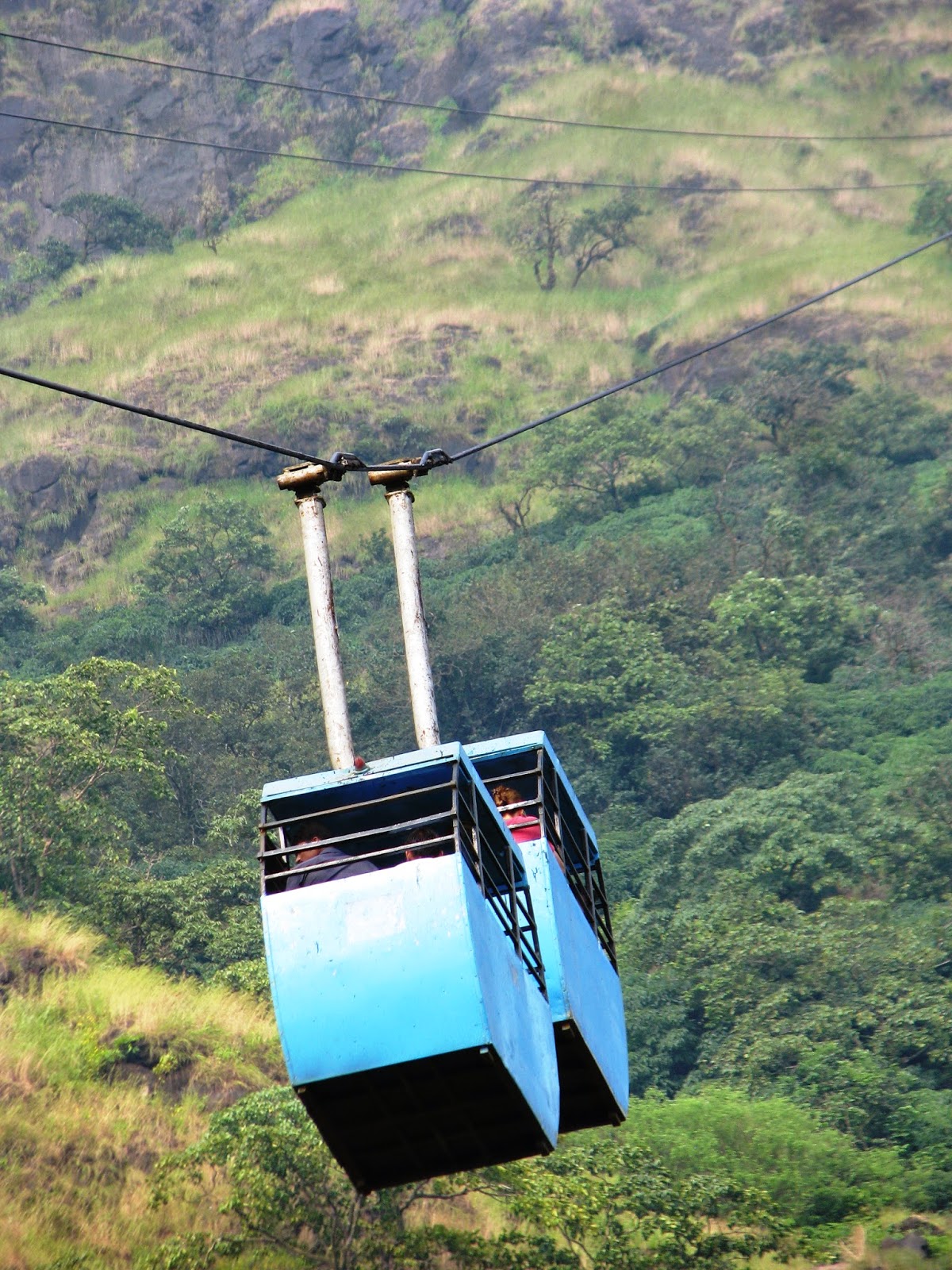 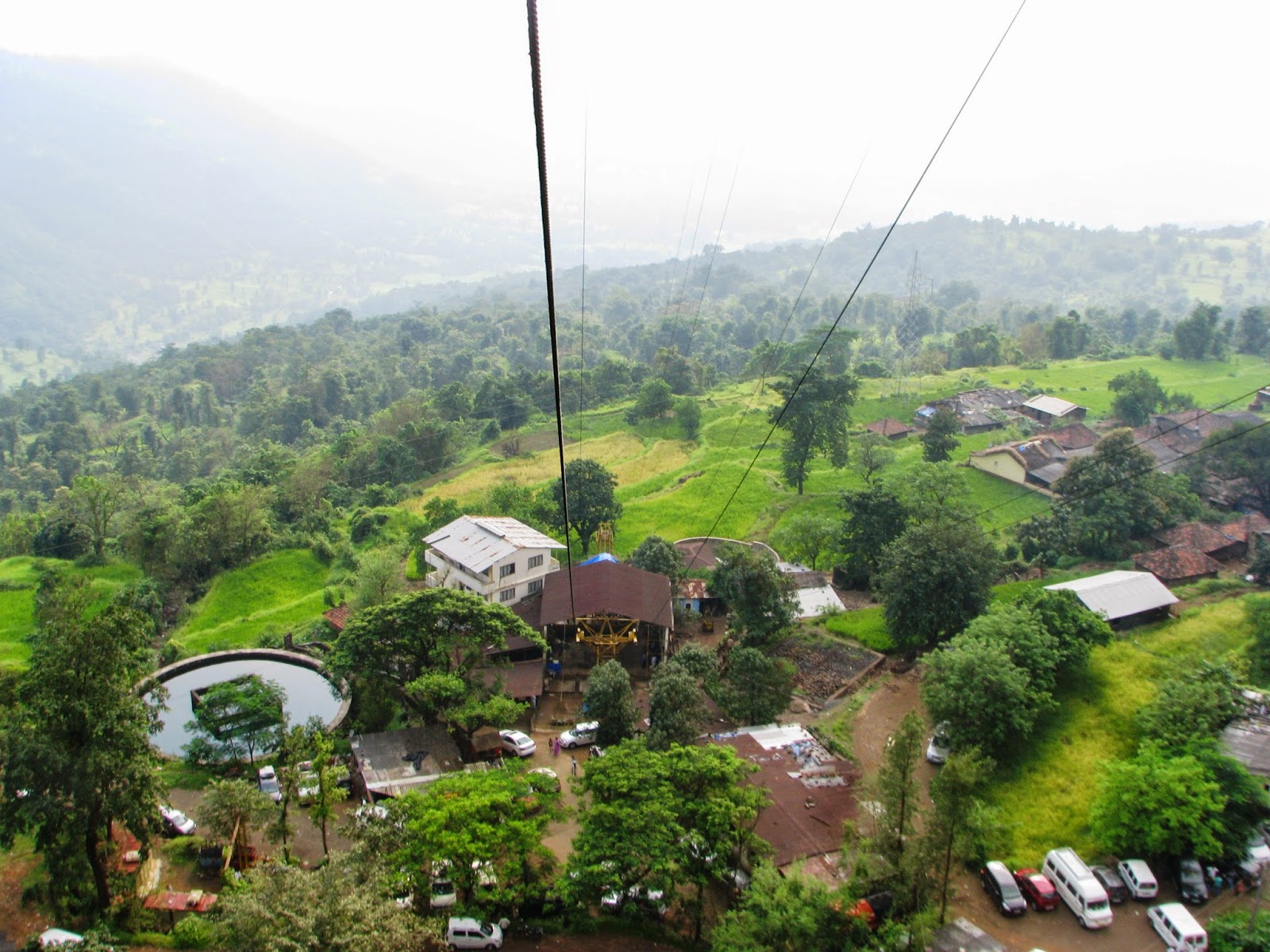 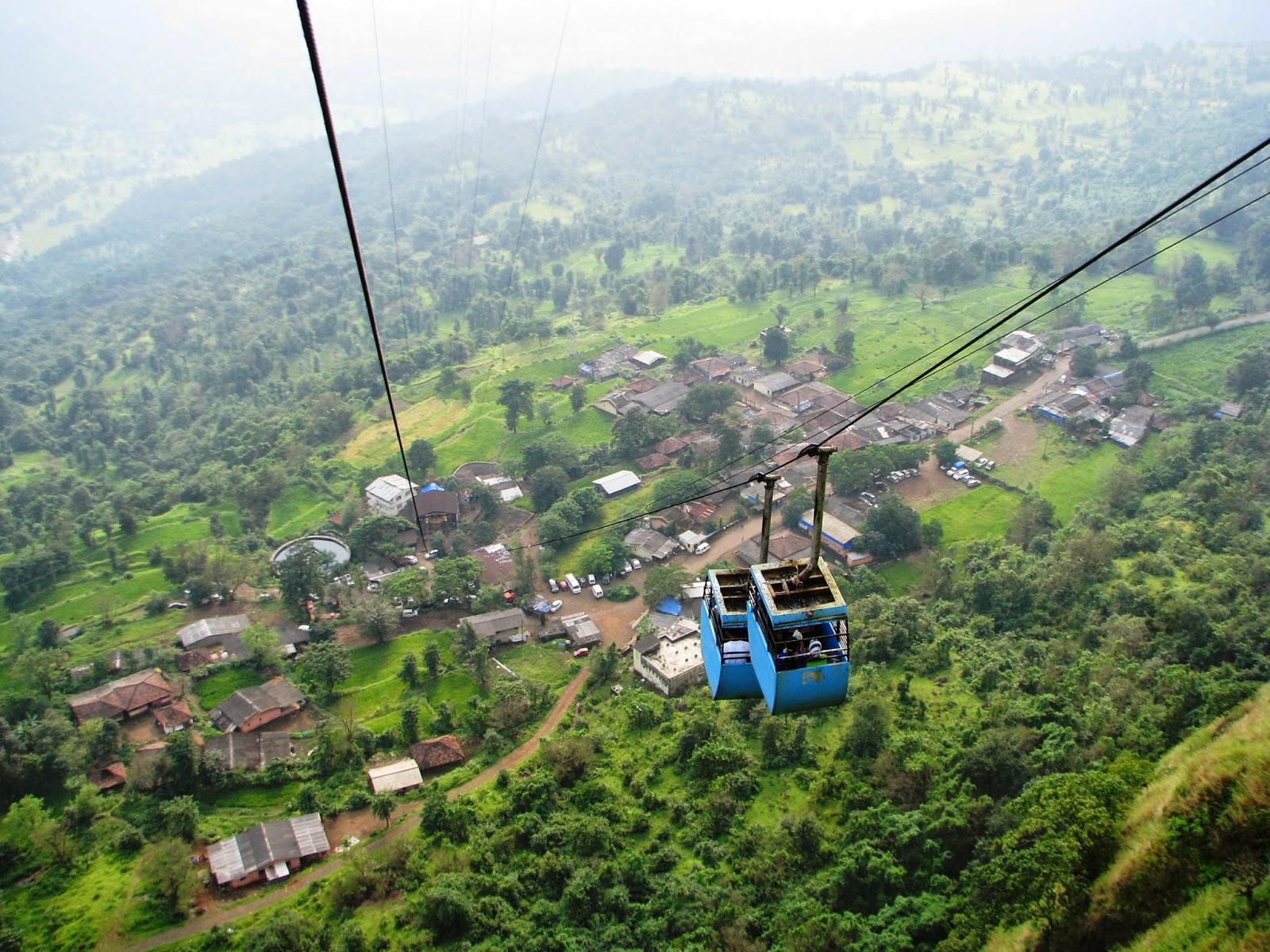 We were in the fort by 4PM and planned to come back by 5:30PM to catch the ropeway back to ground. We again hired a guide having had a good experience at Pratapgarh. This guide too took us to all the important places and narrated the story of Shivaji’s coronation. The fort was magnificent but it was destroyed in heavy shelling by some British army general in 1811. Shivaji ascended to throne of Hindavi Swarajya (since then Chhatrapati title is put in honor) in 1674 and died in 1680 in the same fort. 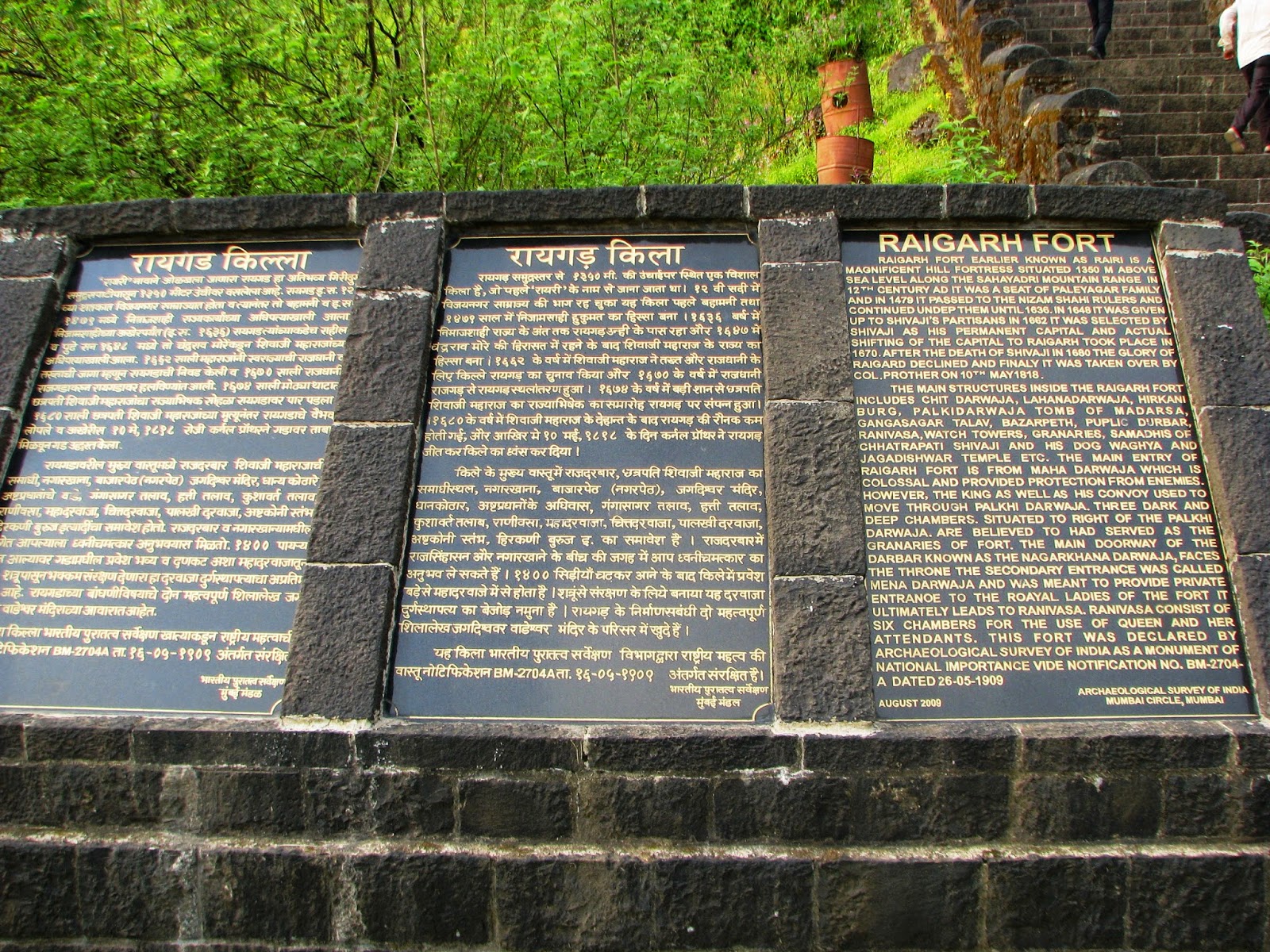 The main structures inside the Raigad Fort, which today stands mostly in ruins, comprise of Queen’s quarters, publicDurbar, watch towers, Darwaza etc. The Queen’s quarters consist of six chambers, meant one for each of Shivaji’s wives. The main palace situated inside the fort was largely constructed out of wood. However, apart from its base, made up of stone pillars, hardly anything else remains. The fort at that time had even a market called Baazarpeth meaning market place where shops were a little raised due to patrons shopping while seated on horsebacks. Takmak Tok is a point of punishment where valley is deep and once somebody is dropped has no hope of surviving.

The place or rock on which sat his throne is still there and now a huge statue sits there which was inaugurated by none other than Jawahar Lal Nehru. At this time, the guide became so immersed in his act that he tried to picture the scene of the day the ceremony was taken up at 5AM in the morning. Legend says that on that day hundreds of people congregated on the fort and entire fort was illuminated by mashals in pre-dawn. There are several other anecdotes which our guide told and again it was highly enjoyable. The area of the fort is huge but we could not visit that due to lack of time and we decided to return back. 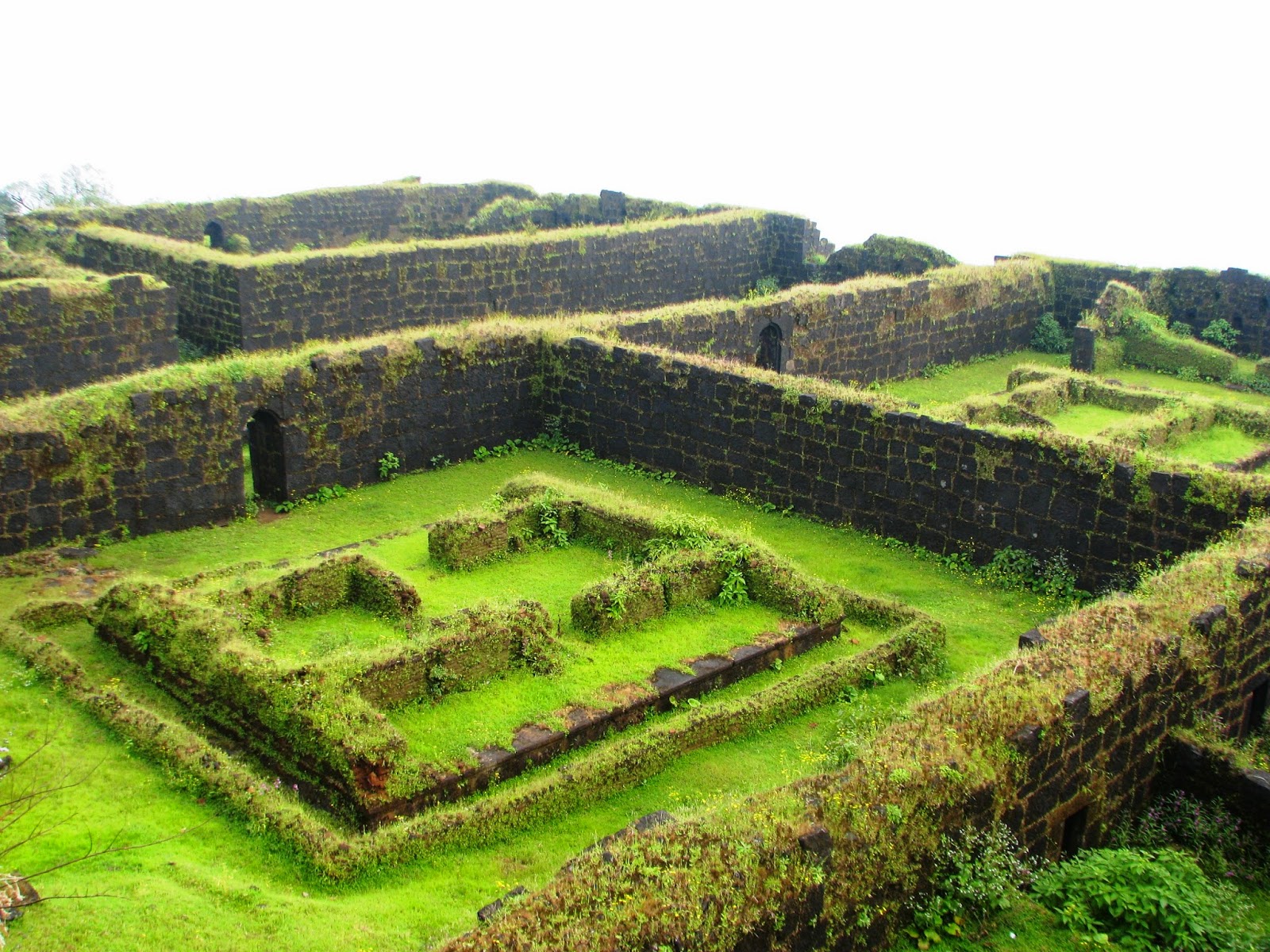 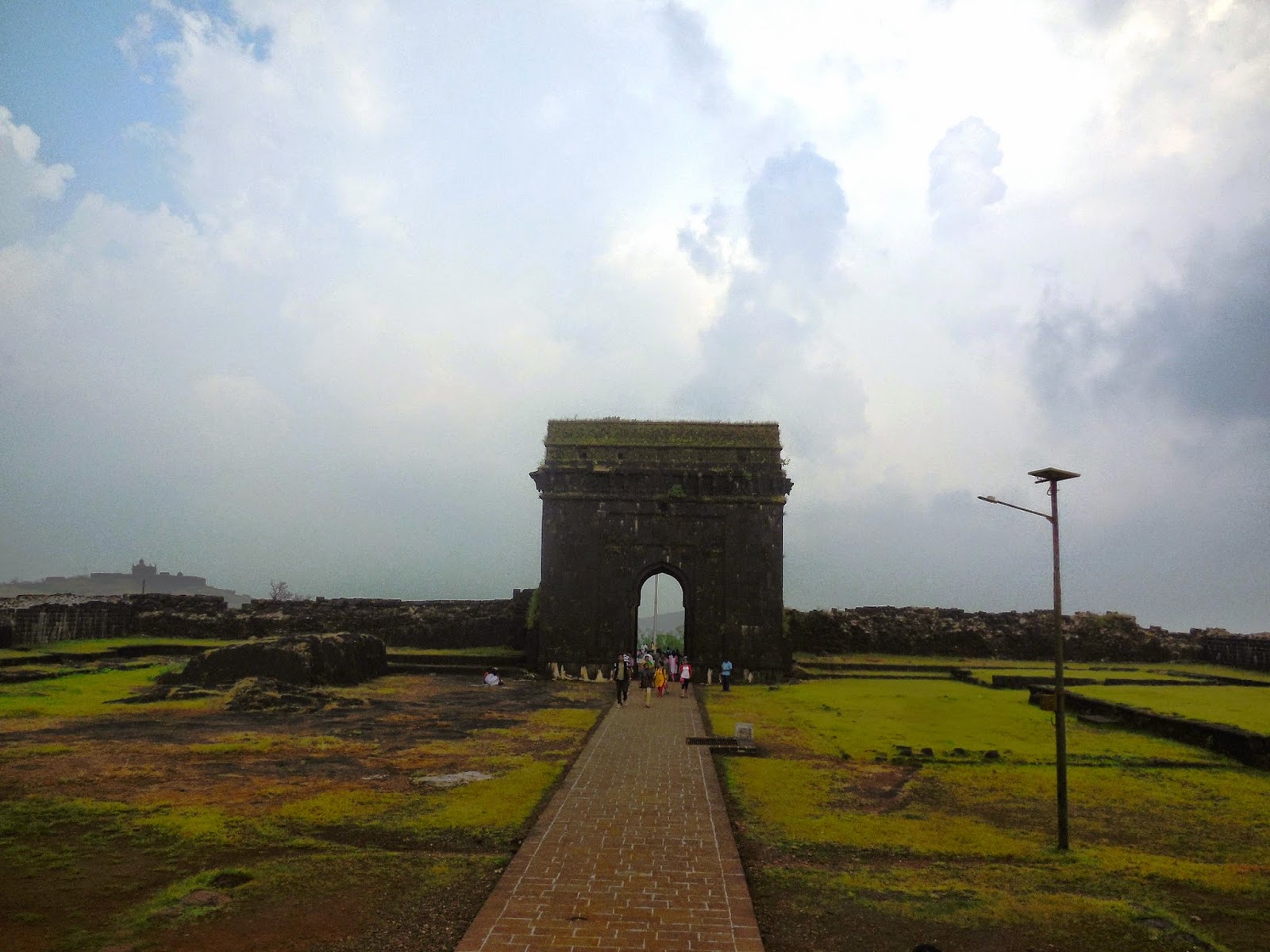 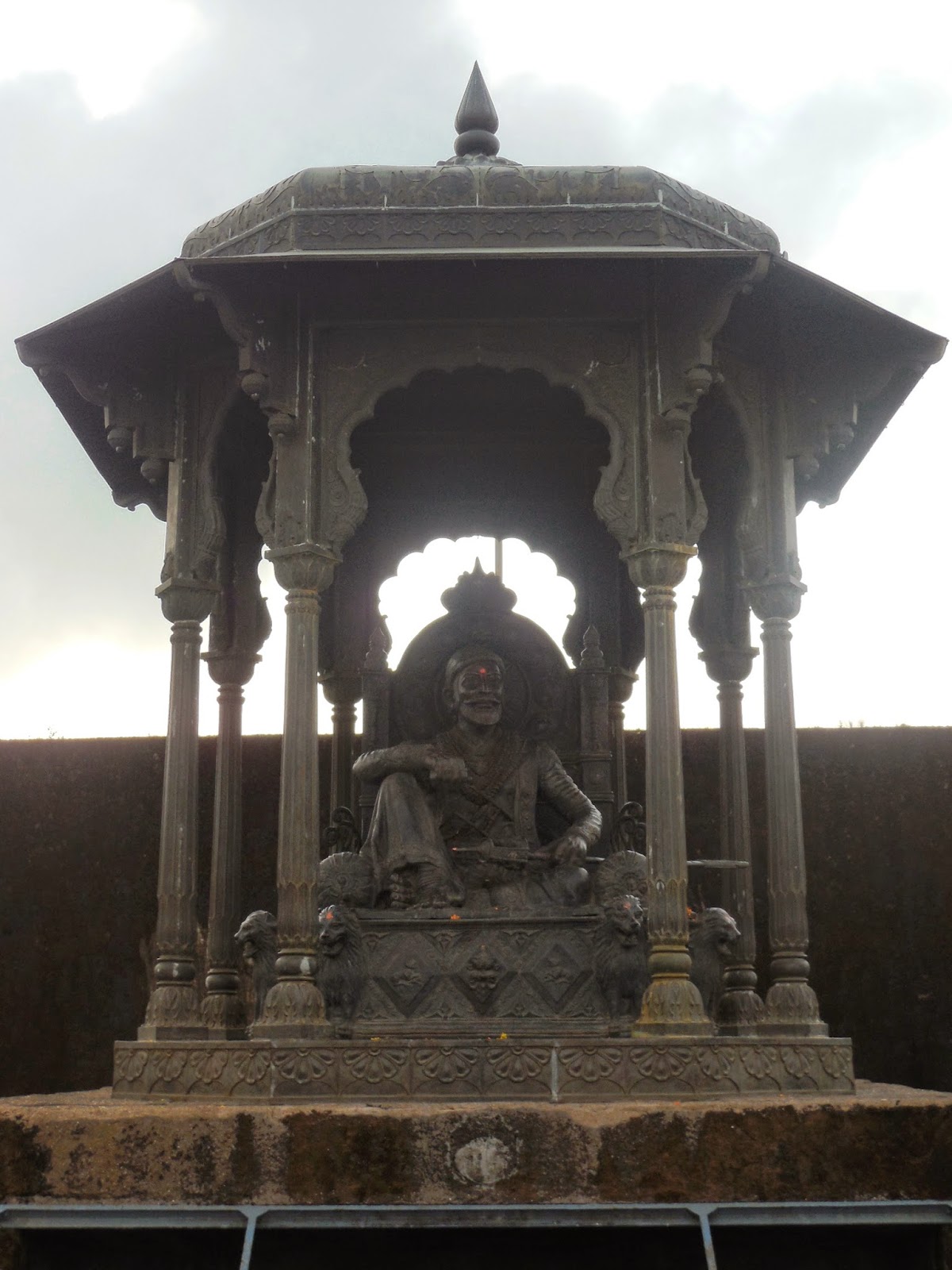 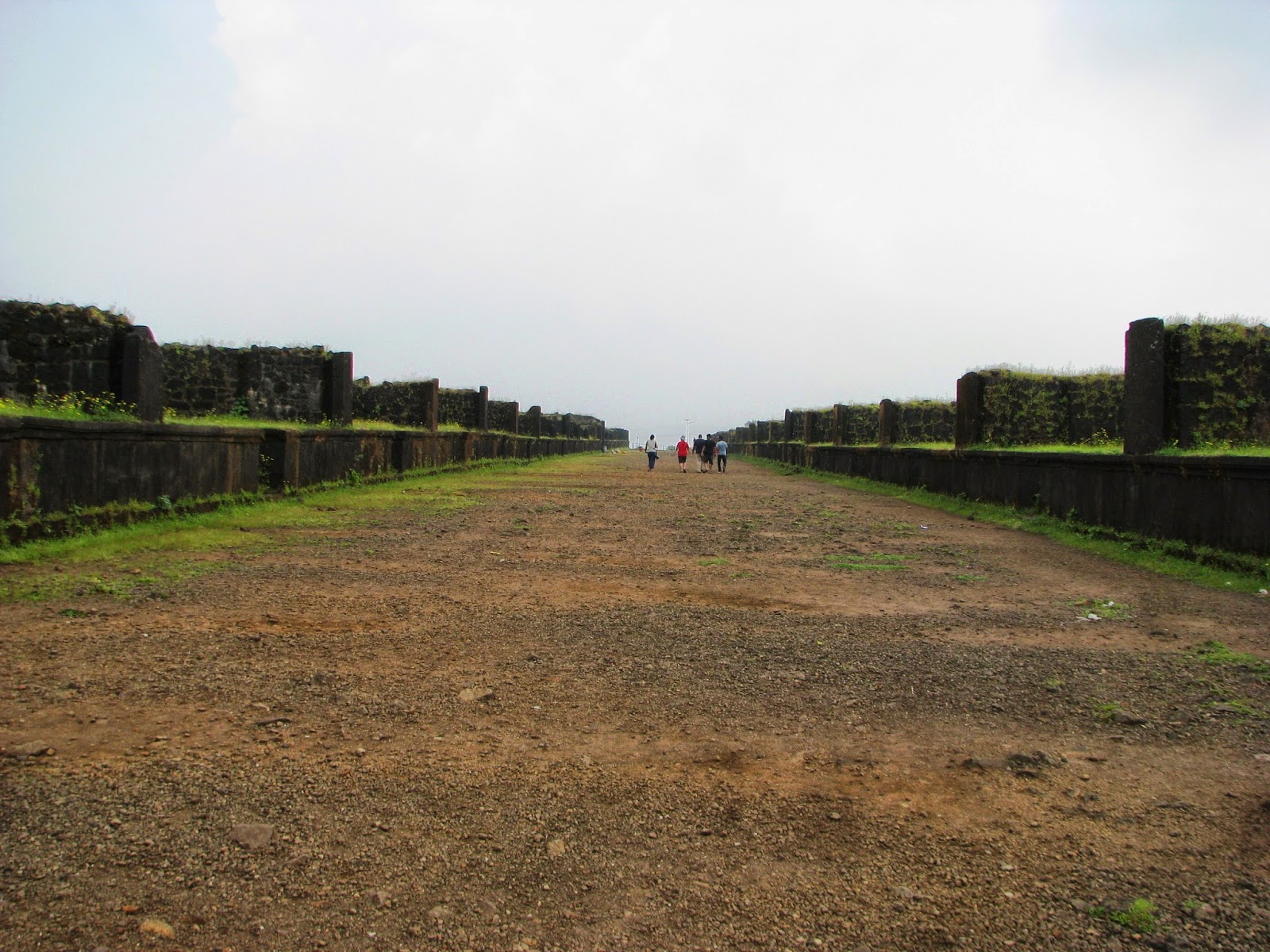 While we were in queue for ropeway and few places behind to board a huge squall took over the area, dark clouds came in and it started raining. The ropeway had to be stopped due to high winds and lightning. The temperature dropped and lot of people including us with a kid felt the cold and were completely unprepared for it. Finally after the excruciating wait of 1.5 hours the ropeway finally started while the lighting and rain was still going on. We came to ground by 7:30 PM. After having a sigh of relief we had another challenge whether to stay back in Mahad or go back to Pune. We decided to go back to Pune but instead of taking the normal road I decided to go upto Panvel near Mumbai and take the expressway thinking that road would be good, fast but was disappointed. The road NH-17 was broken and had diversion or single lane at many places. I wondered when on earth can we have all weather roads in India. However, the FM channels of Mumbai kept us company. We had sumptuous dinner on the highway. After having dinner and this being Saturday and the lure of sleeping in our own bed and getting up on holiday made me to enjoy the drive. Finally reached home by 1:30AM in the night but it was worth rather than stay back at some unknown hotel in a town.

We drove past Vidyasagar Setu aka Second Hooghly Bridge that connects the City of Joy with Howrah and stands at the banks of the River Hooghly. One can get a magnificent view of the entire city from this bridge. Well it is a toll bridge with superfine smooth finish. Then took the Kona Express way and sped all through the National Highway crossing Kolaghat Thermal Power Station and then Nandakumar More. From here we encountered small towns and villages on a single lane carriage path that snakes its way through them.