:
On 31st March, 2012, I with my wife left home for Ghumakkari with no plans. We just wanted to be in hills of Uttarakhand, our favourite state. My wife loves Haridwar, so she wished to start from there. That day, early morning we started our journey and reached Hariwar with no halt.
: 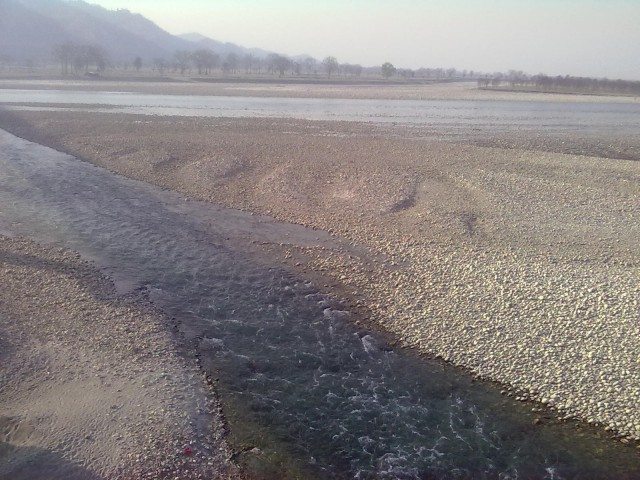 :
We can’t take bath in holy river Ganga, as there is a ritual or puja which had to be performed for us in first year of our marraige, which couldn’t take place. It will be done this year. So we had to find something else so we decided on Crystal world (a water park). I called my brother-in-law, when I was on my way, explained my plan and by the time we reached Crystal world, he was there with his newly wedded wife. We all four had fun there.
: 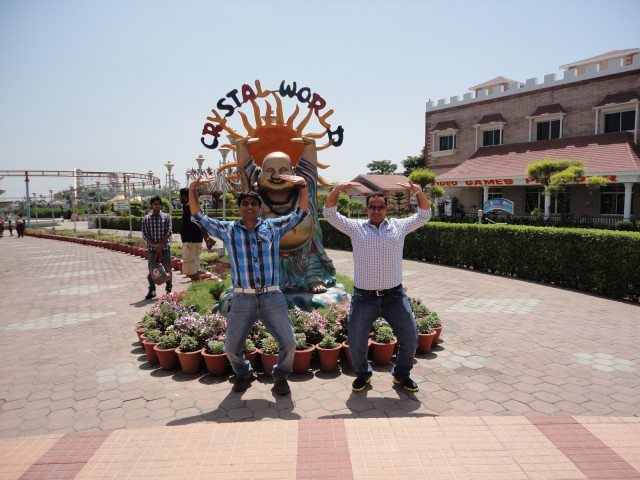 :
This was my second in any water park, before this I had been at Fun city, which is located on the way to Rishikesh from Haridwar. The ticket was for Rs 250 per person, I think. It had all the rides for free exept two or three, like Boating and Train, in which we were not interested. We changed our clothes, had swimming contumes provided on rent. Had 4 hours fun there. Some of the rides were breath-taking, like one ride took us at the height of almost 40 feet and then slided from there to downward into the water…truly amazing. My wife is very fond of such rides as she is very much strong-hearted, but I can’t. I am not afraid of heights, but at times I feel that there could be malfunctioning.
: 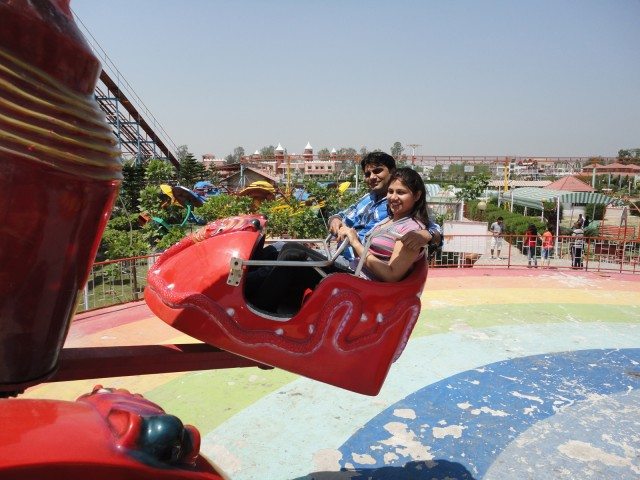 This ride was not that easy, that I thought.

:
There was a restaurant, which had above average food on reasonable prices. We had chhole bhaturey, dosa, chole chawal and rajma rice in our lunch. Post rides and all fun, we took bath and left the park for Har ki Podi. Plan was to see evening Aarti. We were there around 5 PM. It was great Aarti darshan. So many times I had been there, but could never be the witness of Gangaji Aarti. I was lucky this time.
: 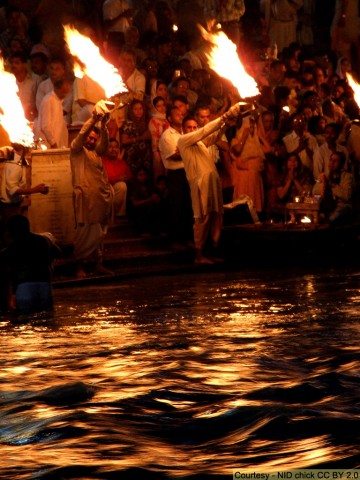 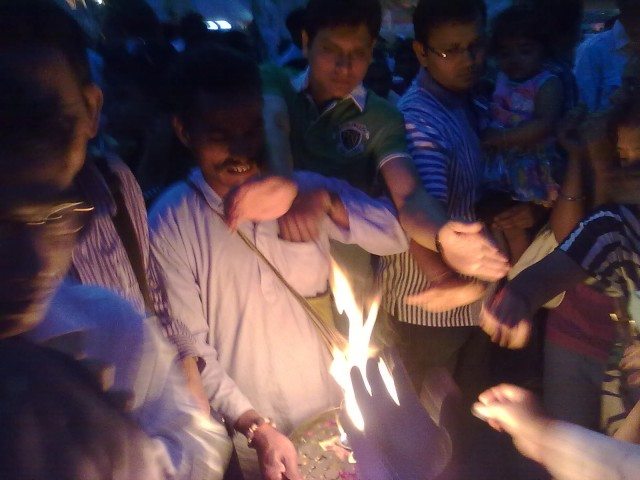 You may take Aarti now...Please no donation. Everything is free on Ghumakkar.

:
After this divine religious ceremony, we had a glass of Lassi, which is famous over there, and spent more than one and half hour in narrow streets of the local market. We hadn’t planned our next day yet, so discussed that, and made Mussoorie final on our wishlist.
:
Next morning, we two (me with wife) were on our way to Mussoorie, had left Rishikesh and Dehradun behind. When we crossed Dehradun and was on the road to Mussoorie, we saw Mansi Deer Park’s entrance gate, and had our first break there. This spot at the foot hill of shivalik is situated about 10 kms from dehradun, on mussoorie road.
: 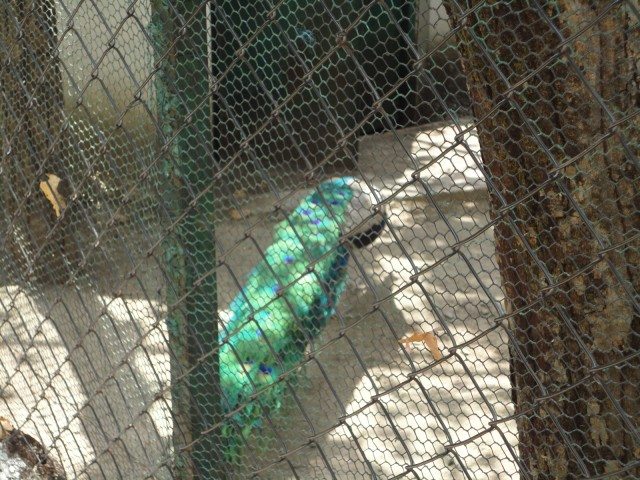 A peacock. I requested him to dance, he said that he will dance only in Amit bhai's post. (Just kidding) 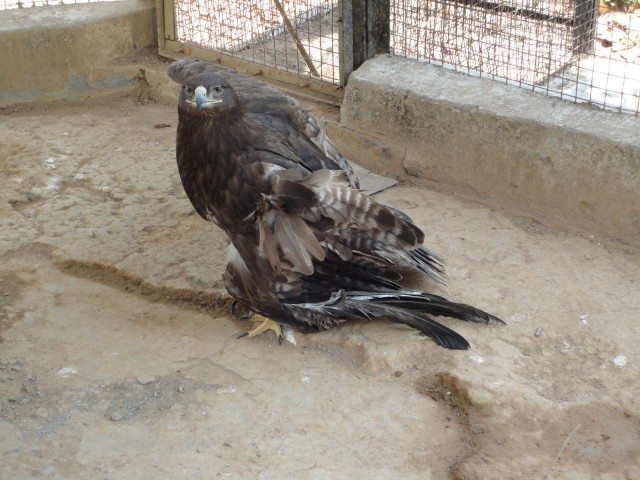 An Eagle with a broken wing. 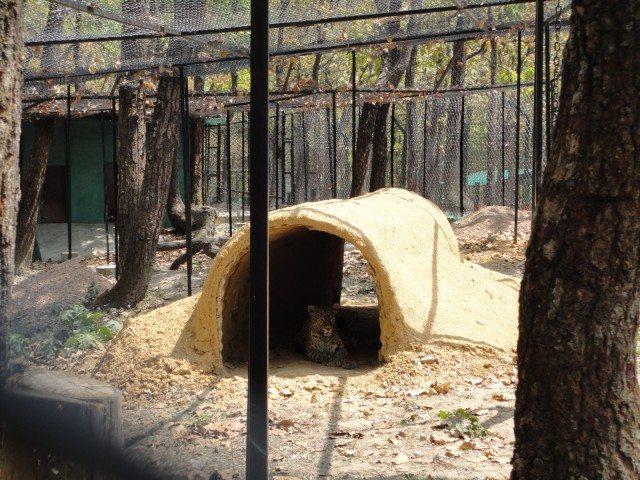 :
A mini-zoo with a children’s park and lovely natural surrounding make it an ideal sightseeing. I fould it well maintained and saw two horned deer, Tiger, Neelgai, Peacock and many other animals. With a wholesome weather, natural environs and the lush greenery makes the zoological park an ideal spot for picnic and excursion.
: 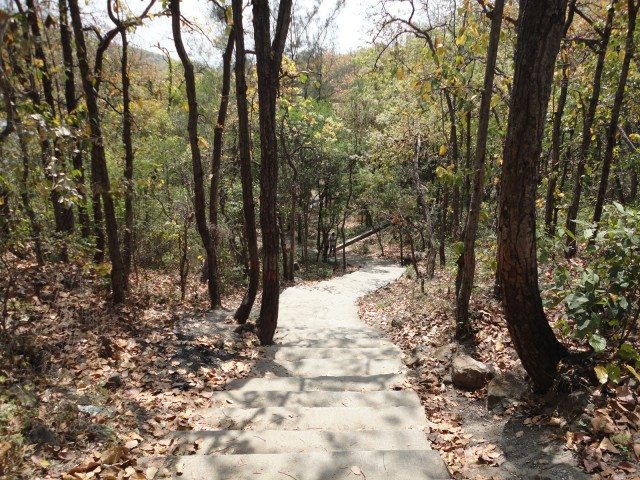 A passage to explore more in park, We found some couples there, exploring something else. Shhhhh 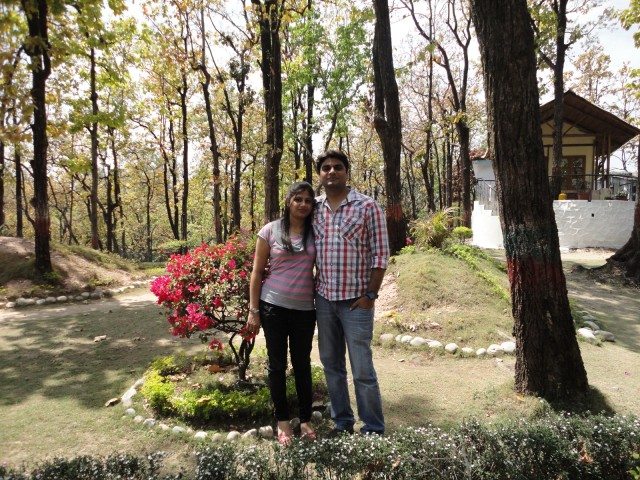 We were there to explore only the park.

:
We spent one hour there and then left for Mussoorie. Very soon, we were on the way to Mussoorie.
: 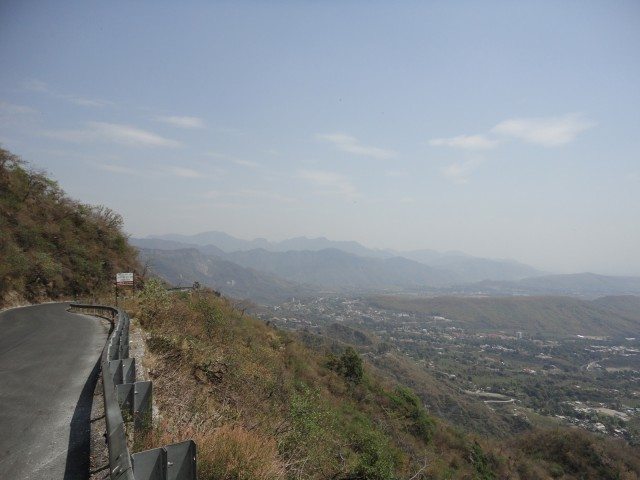 On our way to Mussoorie...Yeh haseen wadiyaan, yeh khula aasmaan

:
Having Maggie at Maggie Point was a great way to unwind, just drive along Dehradun Mussoorie road until after shiv mandir. And there were a few road side hawker sheds popularly known as the “Maggie Point”, here you can ask them to prepare a hot spicy Maggie (your own style). We bought some chips packets and had pics of that panoramic sight and flew away upwards to Mussoorie.
: 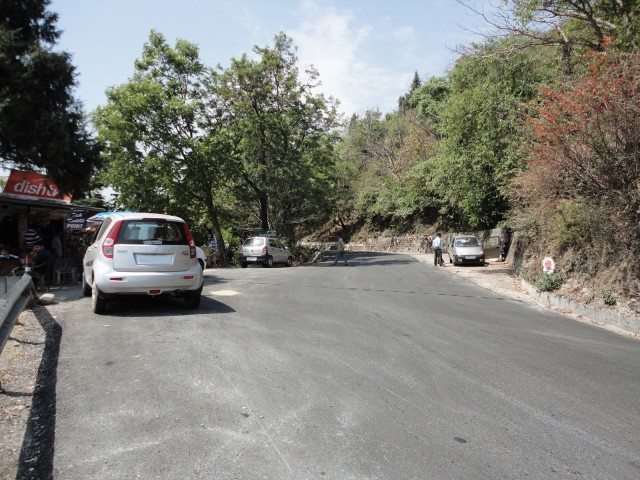 Our car at Maggie point

Now we two at Maggie point.

Roads were full of curves. I was told that the way to Mussoorie was very complicated to drive, but I didn’t find so. I could manage to drive over there easily, what I had to do was just follow the rules of driving in hills, which are

:
Correct me if I am wrong and add more points if they exist.
:

After leaving Maggie behind, on the way to Mussoorei. Mussoorie! here we come.

:
Road to Dhanaulti was on our way to Mussoorie, we wished to visit there next time. Mussoorie was 4 km and 32 km was Dhanaulti.
:

We choosed Mussoorie over Dhanaulti.

:
We wanted to see the Kempty Fall but we didn’t have much time as we had to return on same day, so choosed Company garden over Kempty Fall, which was on the way to Kempty Fall. Kempty Fall is 15 more kilometers away from Mussoorie. I will definitely go there soon.
: 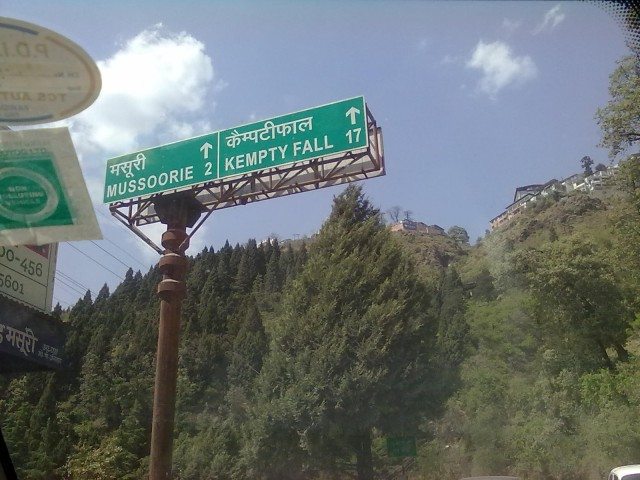 :
Although I gave Rs 50 for parking, still I had no space to park my car at Company Garden. I am pretty good at parking so made space for myself. Company Garden is popular tourist destination. During season, the Company Garden has beautiful collection of flowers and plants. The artificial lake and garden enables people enjoying Boating and Nature Walk, respectively.
: 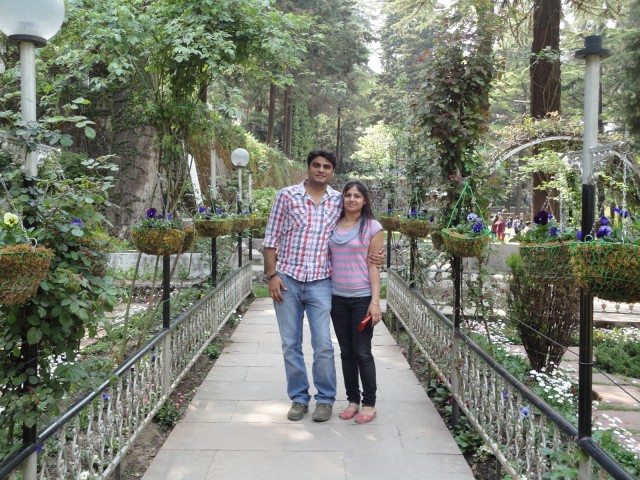 At entryway of Company Garden.

:
It was so beautifully decorated that we could spend our whole day there. An aritificial lake in which kids were boating, along side two artificial water-falls, which were surrounded by the people taking pics with them. One can see the panoramic view of nearby hills from there. There were plenty of variety of flowers which were beautifully decorated in small pots, many of them were new to me. There was also a food court, where I didn’t try food as there was lack of time, we had to explore the Mall Road yet.
: 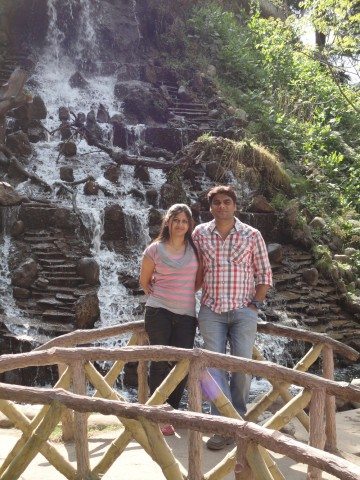 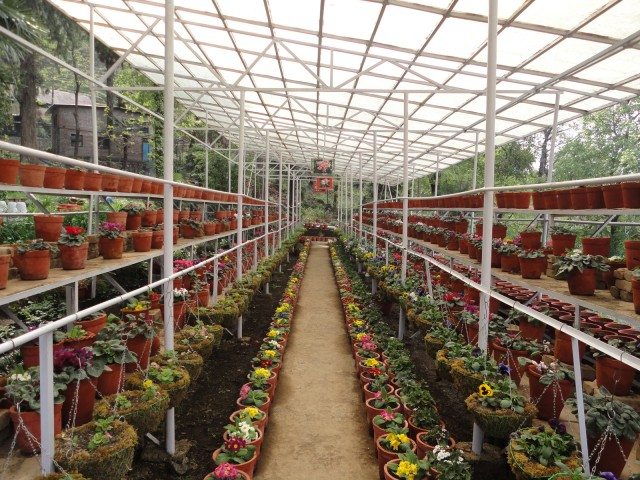 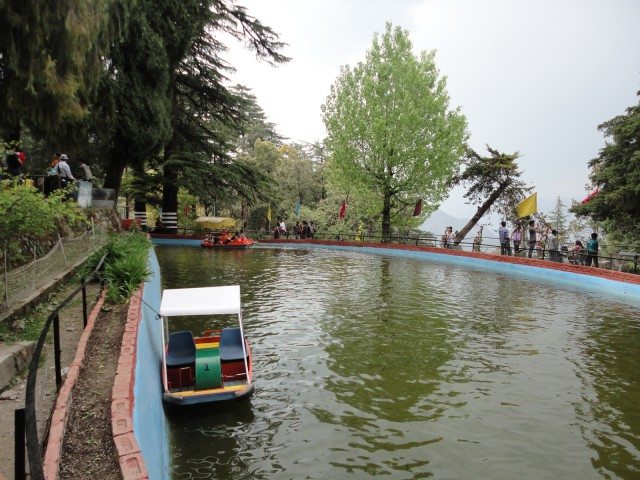 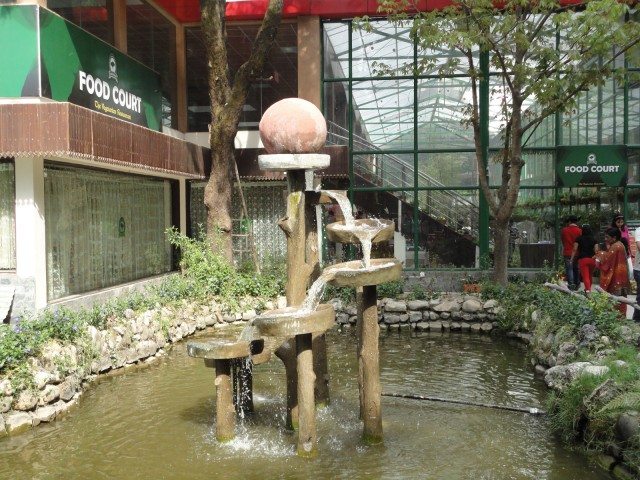 Many colorful small fishes could be seen in this water pond. 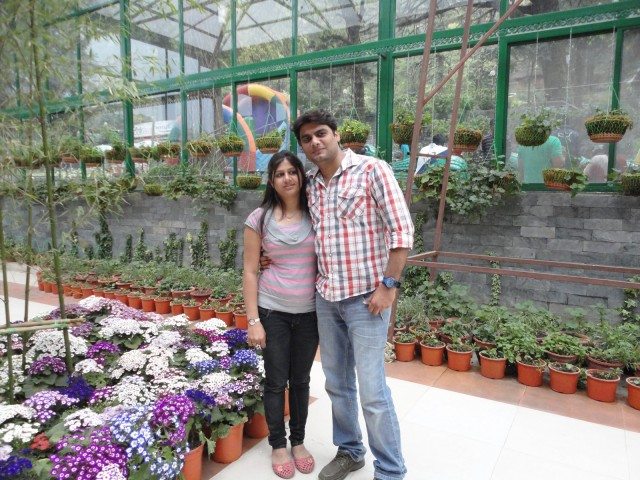 At food court of Company Garden.

:
We left Company garden by 4 PM, decided to have lunch at Mall Road. We were on our way to mall road, admiring beautiful hill, thanking God for making earth so beautiful.
: 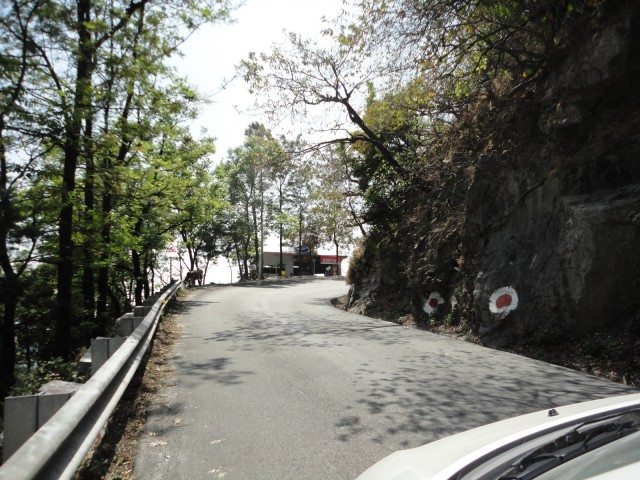 We spent great time at Company Garden, this was time to move on.

:
We faced traffic jams on the way to Mall road as the road was narrow and trucks/buses were on them. Well, no probs, as it was great to be in hills, we were stuck in jam, inhaling fresh air of hills, watching out from window, staring beautiful people walking, dreaming for second visit and last running out of money.
: 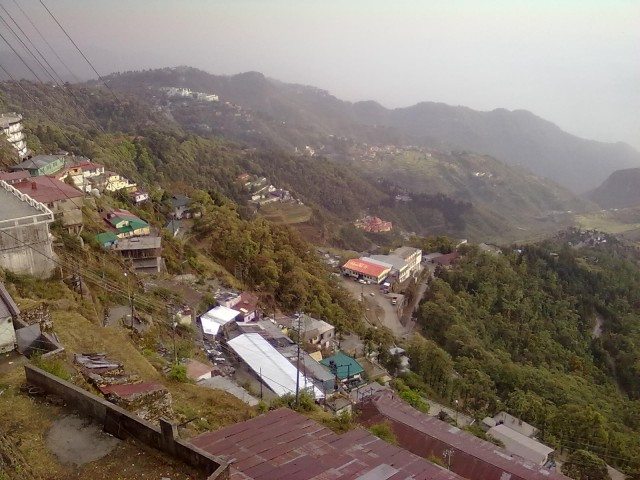 A view of Mussoorie. 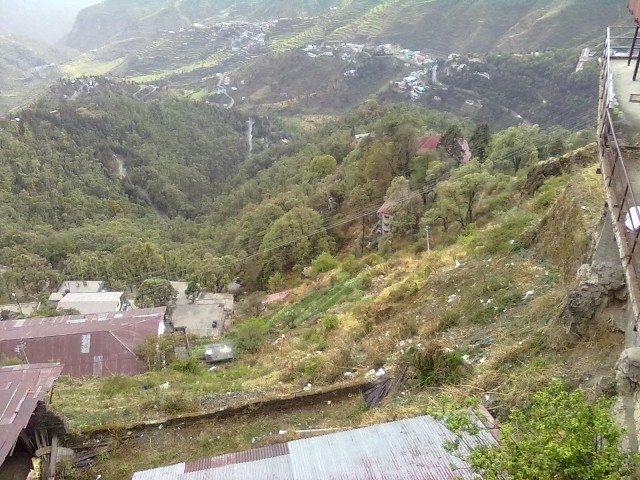 In Mussoorie, terraces are used as parking space like other hilly areas.

Hues of hills were changing as their farawayness from sight.

:
As I reached Mall road’s entryway, soon I reminded that once I read in Manu bhai’s Mussoorie story about the Rs 100 entry fee for Mall road. But it was late, as I was backed by few cars by that time. I paid Rs 100 parking and parked my car. Well it was not bad, as car should be safely parked, which could only be done at Mall road.
: 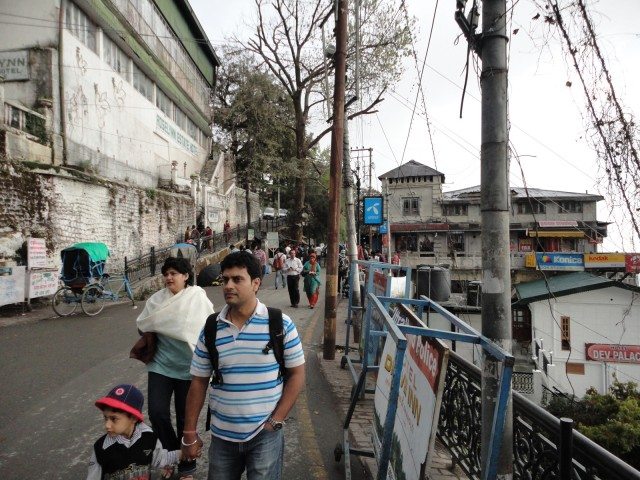 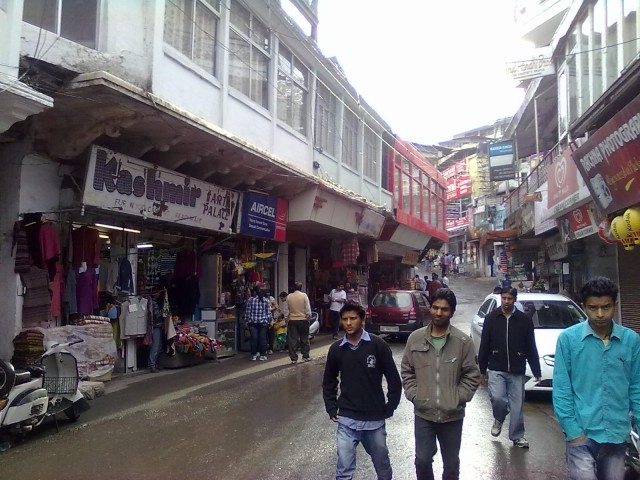 Almost every brand shop was on this Mall Road.

:
Wow! the beautiful Mall road, we liked it. First I found an ATM, got some money. I bought Reebok shoes as there was discount of 40%, which was not even available on my favourite shopping site Yebhi.com. It was 5:30, we had chowmeen and a dosa near the place from where people get cable cars for Gun Hill, the second highest peak of Mussoorie. We desperately wanted to spend more time there but I had to drive downhill so by 6:30 PM we left Mussoorie for back home to Faridabad. Around 8:30 we had crossed Dehradun.
: 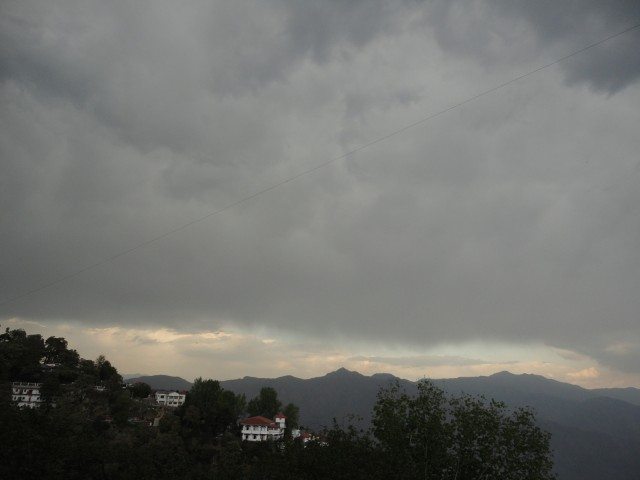 Bye Bye Hills! I will come back soon.

:
We had very beautiful time there. It is worth to call Mussoorie, the Queen of Hills. On very that day, We promissed to Mussoorie to visit soon, as there was Kempty Fall left to explore, and also I want to be at Gun Hill via rope way.
:

Jolly grant airport of Dehradun is the nearest airport, which is just 58 km from Mussoorie, which is almost two hour drive. Dehradun railway station (34 km) is the nearest railhead of Mussoorie. Dehradun is well connected with railways to the major cities of India. Shatabdi Express and Mussoorie Express are the two major trains connecting Dehradun with major cities of India.
Buses to Dehradun are easily available from ISBT Kashmiri Gate, Delhi and other major destinations of Uttarakhand state.
The Road route from Delhi to Mussoorie:-
Delhi >> Ghaziabad >> Modi Nagar >> Khatauli >> Purkaji >> Roorkee >> Hardwar >> Rishikesh >> Dehradun >> Mussoorie
:

I will be back soon with new destination till than keep doing Ghumakkari.

As it happens, when God takes away something, it gives something to bank upon. The queen also had some of the most trustworthy lieutenants to manage the affairs of the kingdom. I also found an old temple of Mata Sharda near the fort. In fact, it was situated just at the base of the hill. Somehow, I thought that Goddess Sharda gave immense strength to our queen to take up the responsibility while re-building her own life with the growth of her son, who was known as “Veer Narayan”. Due to safety reasons, the queen had also shifted her base to Chauragarh.

Five more years passed under the rule of queen bringing a sense of normalcy in the kingdom. Then, the destiny struck again in 1556 AD, the independent sultan of Malwa (Present day Mandu) crossed the distance of 650 kilometres and attacked the Queen thinking that he would not be met with any resistance. But, he was proved wrong. Even though, our queen was fighting her first battle, she came out victorious. Baz Bahadur had to run away for his life.