Kashid has been a long awaiting trip for me. Ever seen I saw pictures of the long winding roads leading to the beach and the palm trees lined up alongside the white sands, I have been itching to see this heavenly place with own eyes! The moment arrived on a Saturday when we set our course for Kashid in a friend’s car. 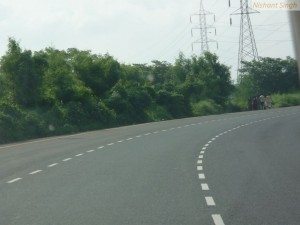 It didn’t take us long to navigate the early morning Mumbai traffic and soon enough we were cruising on beautiful roads including the Mumbai-Goa highway. For most part, the road was good, except for when we had to traverse Alibaug to reach Kashid. But that was only a small deterrent which did not deter us from pursing our goal. 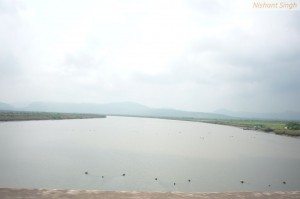 In approximately three and a half hours we reached Kashid Beach. Taking into account the few stops we made for photo shoots, I think we made it to Kashid in good time.

Once there, we decided to munch on some quick snacks and ordered for Omelette and Bread – that is the only thing, besides some chips, biscuits and tea that you get at the many shacks situated on the beach. But the best thing besides the beach, were the hammocks! Lazing around in the hammock, we took in the beautiful sights on offer. 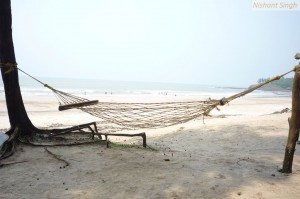 The beach, the white sands and the muddy waters are surrounded by two cliffs on either end. The beach itself is a 3KM stretch and there are carts available for those would like to check out the beach in its entirety. We weren’t interested in that and were more than happy to click some amazing pictures while lazing around the shacks. Some of us also caught a short and much needed nap. 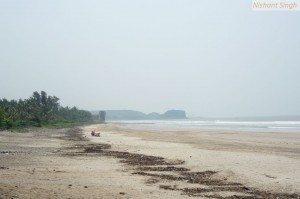 After Kashid, we headed out to Murud beach. We also went to Rajpuri from where the ferries are available to go to Janjira Fort. The area is very pretty with palm trees overlooking the calm sea. Spent some time clicking pictures of the fort and the beach. We didn’t get time to actually visit the fort – a trip we have scheduled for another time. Since it was in the middle of the day, we decided against going on the Murud beach and instead chill out by some restaurants overlooking the beach. 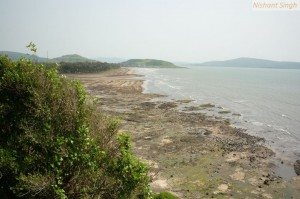 Lunch was served at Anand Vatika, Murud, which specialises in sea food. Being at the heart of a fishing community, we were all for a sumptuous sea food lunch. We ordered for Prawns fry, Pomfret fry, and Prawns Biryani along with a lone chicken dish – Chicken 65. The meal was good albeit a bit oily but good nonetheless. We paid INR 150 each, thought was a bit expensive but then sea food anywhere is more expensive than other meat products!

Once over with lunch, we decided to head back home. Reached home in around 4 hours. Overall, it was a wonderful trip. Was a disappointed that I did not get to see the sunset but besides that there are no complaints whatsoever!

Kashid is approximately 160kms from Mumbai. We took the Mumbai-Goa highway (NH17) and took a right turn from the highway to go to Alibaug. Once at Alibaug, we were directed to a bypass road that took us straight to Kashid through a small concretised stretch of road which is surrounded by trees and lovely houses. Murud is approximately 30kms ahead of Kashid and the road which goes to Kashid from Alibaug also goes straight to Murud as well. One can follow the same road and reach Harihareshwar and Diveagar as well.

Here are the albums with pics:

Beach trip to Kashid and Murud was last modified: December 3rd, 2019 by chicmagnet

So here I am back again to share few of my short travel tales. Starting with one of the trip which I remember was Dhanaulti which I visited in Feb’14.