Friends who want to go places with you, a week of mid-semester break (and really supportive mom and dad to fund your trip ) are all it took for me to embark on this trip.

One of my friends who has already visited Mussoorie and Rishikesh on separate occasions  helped me zero-in on the location.

I wanted to go on a self-drive as suggested by some in the travel blogs on the net. Two of us(myself included) knew driving and everyone readily agreed to this seemingly dangerous idea. After some surfing on the net and brain storming, I got the final plan ready and we decided to start on the immediate next day.

Start from IIT in the morning and reach Rishikesh(via Haridwar) by evening.
Night stay at Rishikesh.

Rafting in the morning.
Start for Mussoorie by evening.Night stay at Mussoorie.

Spend the day in Mussoorie.
Night stay at Mussoorie.

Start for Delhi in the morning and see Robber’s Cave in Dehradun on the way.
Total time: 3days 12 hours (84 hours)

We rented a Swift from Volercars. For the stay at Rishikesh, we booked into Hotel Sai Ganga Cottage from goibibo.com. And for the two nights at Mussoorie we looked into Hotel Prince on goibibo.com , but called at the hotel directly and made the reservations(the hotel manager offered rooms at a lower price).

We got the Swift in the morning. Since everyone packed light we managed fit our luggage in the car trunk. After setting the destination to Rishikesh on my smart phone, we started at 10:30 from IIT. The journey was a pleasant one. When we crossed the Uttarakhand border we paid the state vehicle tax, which can also be paid online. Later, on reaching Roorkee we went into IIT and met with some of our old friends.

What was supposed to be a pit stop extended into 2 hours. It was around 9pm we reached Rishikesh via Haridwar on the way. In the night Haridwar was decorated with lights for the Kumbh Mela that was going on. After dinner at the hotel and catching up with the Ind-Ban Asia Cup match, we retired for the night.

We wanted to start rafting early so that we could reach Mussoorie before dark. Fortunately for us, the hotel had their own raft and we didn’t have to look elsewhere. One among us did not want to go rafting and he went to see the Ram Jhula and Laxman Jhula. 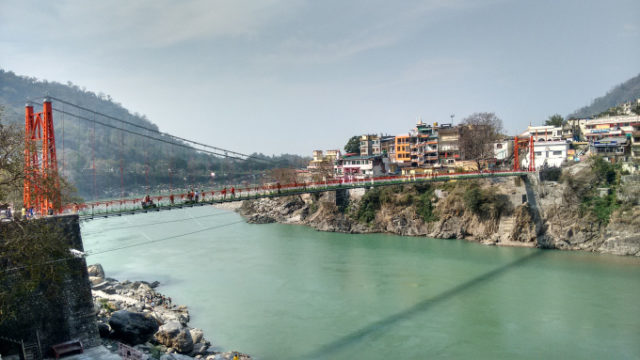 And rest of us went rafting.

Us, the daring four

We travelled 18km on the road upstream to reach the starting point.Then the guide gave us instructions regarding safety measures and the commands to be followed.

But rafting was nothing like I had imagined it to be. It was even more adventurous, awesome and very very tiring. Up close, the rapids are violent and the possibilities of mishap happening seem endless. The initial rapids were scary but we grew bolder with every passing one.

During the initial rapids..

then during the subsequent rapids!

On the way the guide let us swim in the freezing waters. We also did the cliff jump, which was thrilling. Finally we took 3 hours to reach the final destination.

After reaching the hotel we started for Mussoorie immediately. The ghat road is well laid and has clear road markings.There are plenty of sign boards and barricades along the edges which provide plenty of safety. After travelling for 3 hours we reached Mussoorie by sunset.

Mussoorie roads can be a bit congested.We had to use paid parking, even when the hotel provided parking for free. It was the only option since you cannot take a yellow plated vehicle into the main city.

Kempty Falls was our first destination.

And I sort of liked it

The actual view point was somewhere else. We came to this particular location and did not go to the other one. After spending time under the falls, we explored the area further. We followed a stony path around the hills that  was recently cleared.We weren’t disappointed.The region behind the hills was scenic.

Behind the Kempty Falls

Then we went to the Company Gardens as suggested by the locals. It was on the way to the city from Kempty falls. We didn’t spend much time here.

Then ,on googling for places nearby we found Lal Tibba and went for it. The Lal Tibba road is worth mentioning. Some parts of the road are very steep and narrow enough to prevent two cars from crossing each other. And given the hair pin bends there is no way the such a scenario can be prevented.We parked around 1.5 km from Lal Tibba and walked the rest of the way to the top. We had some great scenic views on the way.

Lal Tibba is the highest point in Mussoorie situated at 2300 m height. The view from there was mesmerising. There is a powerful binoculars through which one can view distant hills, houses and mountain peaks.

Us, drinking the Lal Tibba coffee

The guide says December to Mid-February is the time during the snow capped mountain peaks of Yamunotri, Gangotri, Badrinath, Kedarnath are visible.We hadn’t stayed till the sunset, but heard pretty things about the sunset view.

Later that night we walked along the famous Camel Back Road. Had informative conversations with few locals there. They were very friendly and patiently answered every one of our questions.

The Prince hotel we stayed in, was built during the British Era. The hotel still preserves the furniture from those times.The rooms are spacious and offer view of the Himalayan peaks. We spent two nights here and had a good time.

Day4 : Dehradun and back to Delhi

Started back to Delhi in the morning. On the way we stopped at Robber’s cave in Dehradun. The cave has water flowing through it from nearby waterfall. It is around 1km in length and the path is covered with small pebbles and stones.A small waterfall can be found inside the cave. We had to climb few big rocks along the way to reach the end of the cave.

At the mouth of the cave

Walking barefoot had been a bad idea

We finally reached IIT by 11pm , with a few hiccups on the way.

I am practical, fun loving and easy going. I value friendship and love my friends.