For long time I was thinking of visiting Mumbai properly. It isn’t that I haven’t been to Mumbai but it was mostly a day trip or staying in far suburb or to obtain Visa, catch train or flights. For year end holiday due to procrastination, I didn’t book anything worthwhile and when I tried everything was booked in popular locations. So I decided that we can visit Mumbai as accommodation will not be a problem and it was on the list for quite some time.

The plan which I charted out was first day spend time in south Mumbai visiting Gateway of India, Elephanta Caves, Marine Drive, Chowpatty while staying in south Mumbai. Next day we could cut across entire Mumbai from south to north and then stay over at Madh island and then visit Essel world. For stay we booked hotel Residency @ Fort for first day and second day @ The Retreat Hotel & Convention Centre. We started from Pune by 8AM and reached our hotel by 12PM. Even though I thought of asking the hotel but assumed that they would have some sort of parking but when I reached they didn’t have any. Thankfully there was a spot available in a gully available and this being a long weekend I could park easily. Without wasting much time we started for Gateway of India which was 10 minutes from the hotel. There was a sea of humanity there and due to security the some area in front of hotel was barricaded. I laughed on my initial thought of coming there directly and find a parking there. There were plenty of tourists wanting to go to Elephanta caves. Citing this there were non-stop ferries available. Even though it was long queue, we were in the ferry in 15 minutes, shows the efficiency of Mumbai. The fare was Rs. 160 per head. The ferry takes little more than an hour to reach.. This being December end, weather in Mumbai was quite enjoyable. 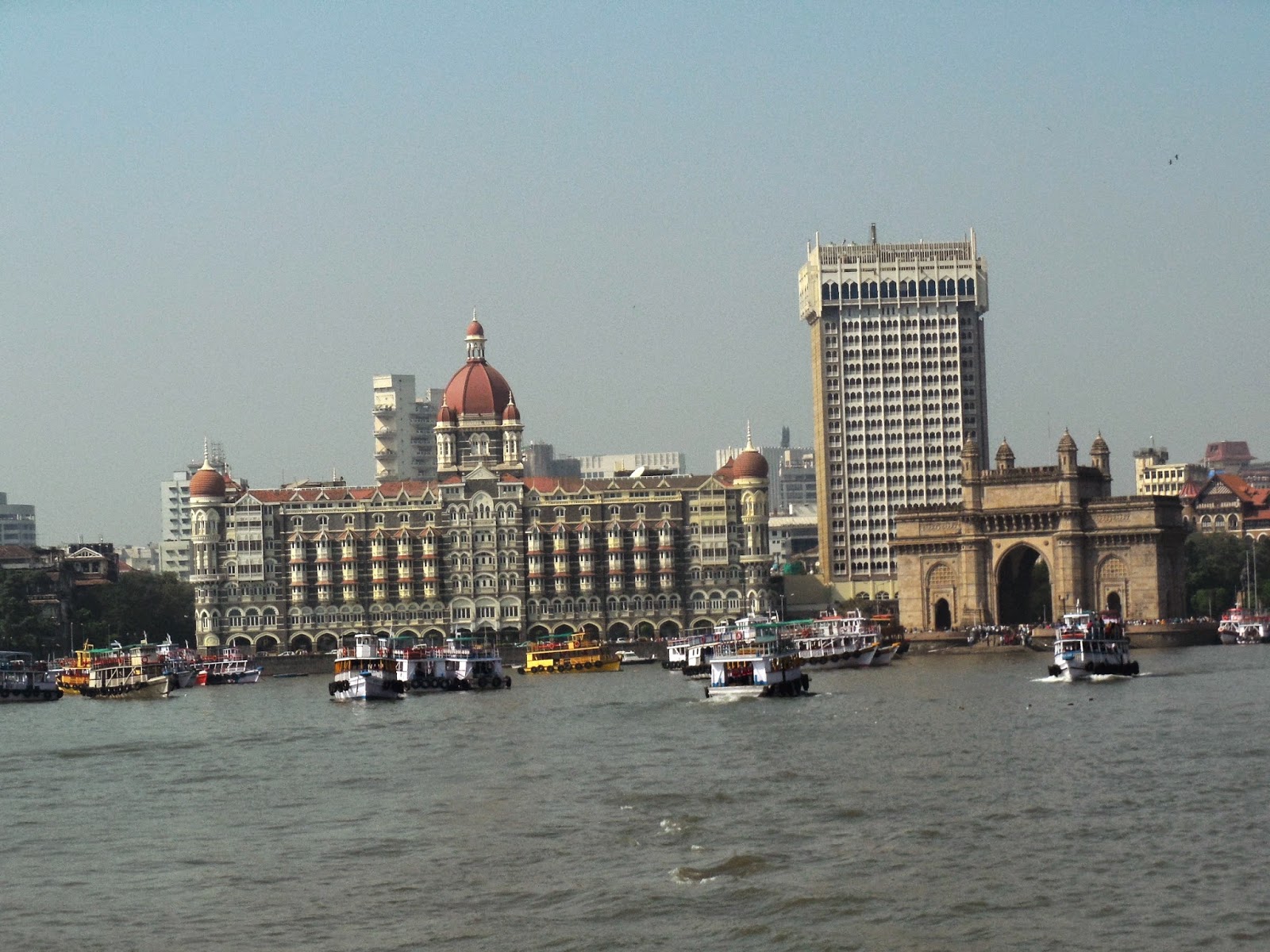 Once we leave Gateway of India, first we get to see Naval docks with lot of frigates parked and later starts the Mumbai dockyard. The main port of Mumbai is JNPT (Jawaharlal Nehru Port Trust) but some ships dock at erstwhile Bombay docks. 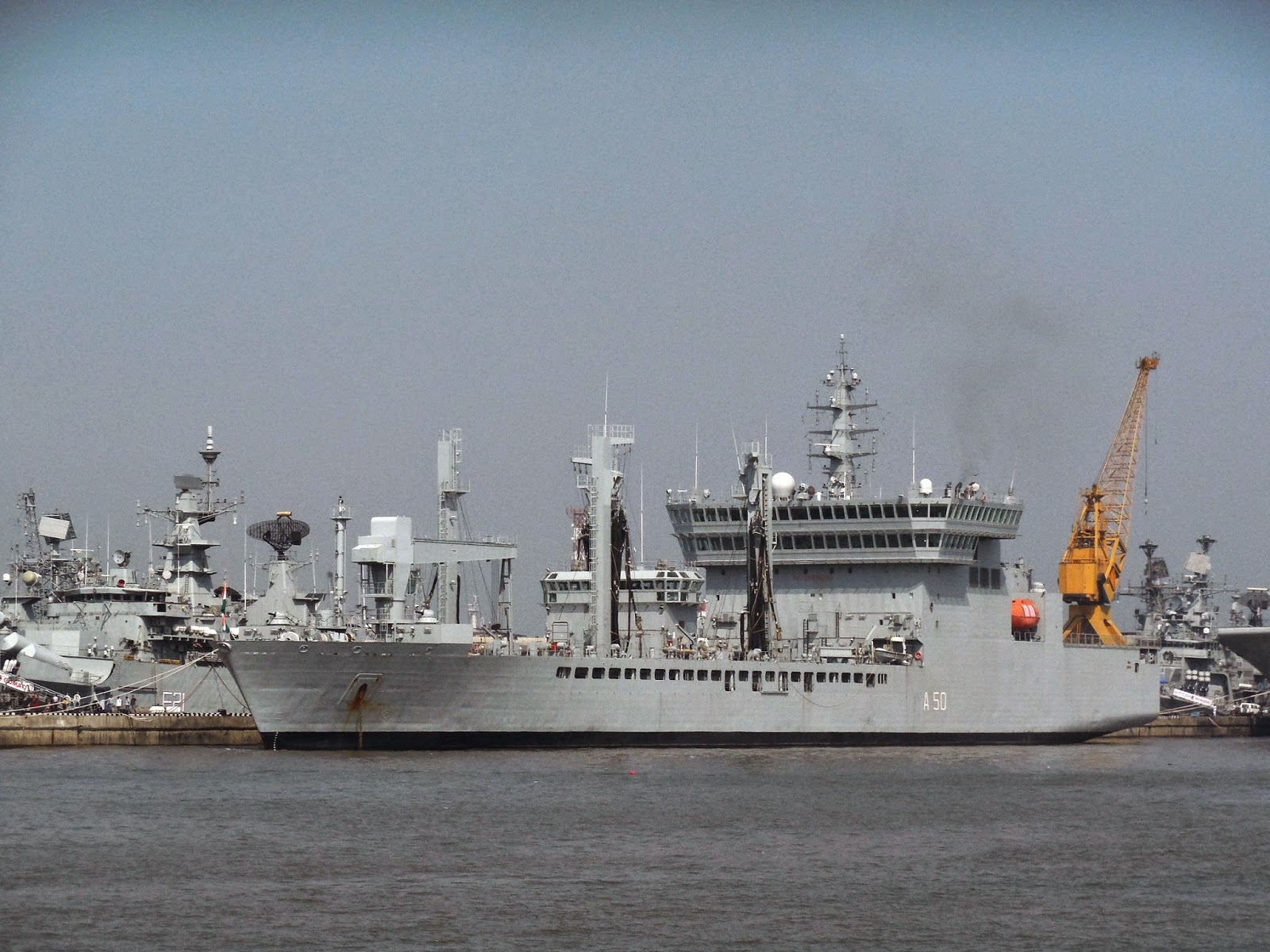 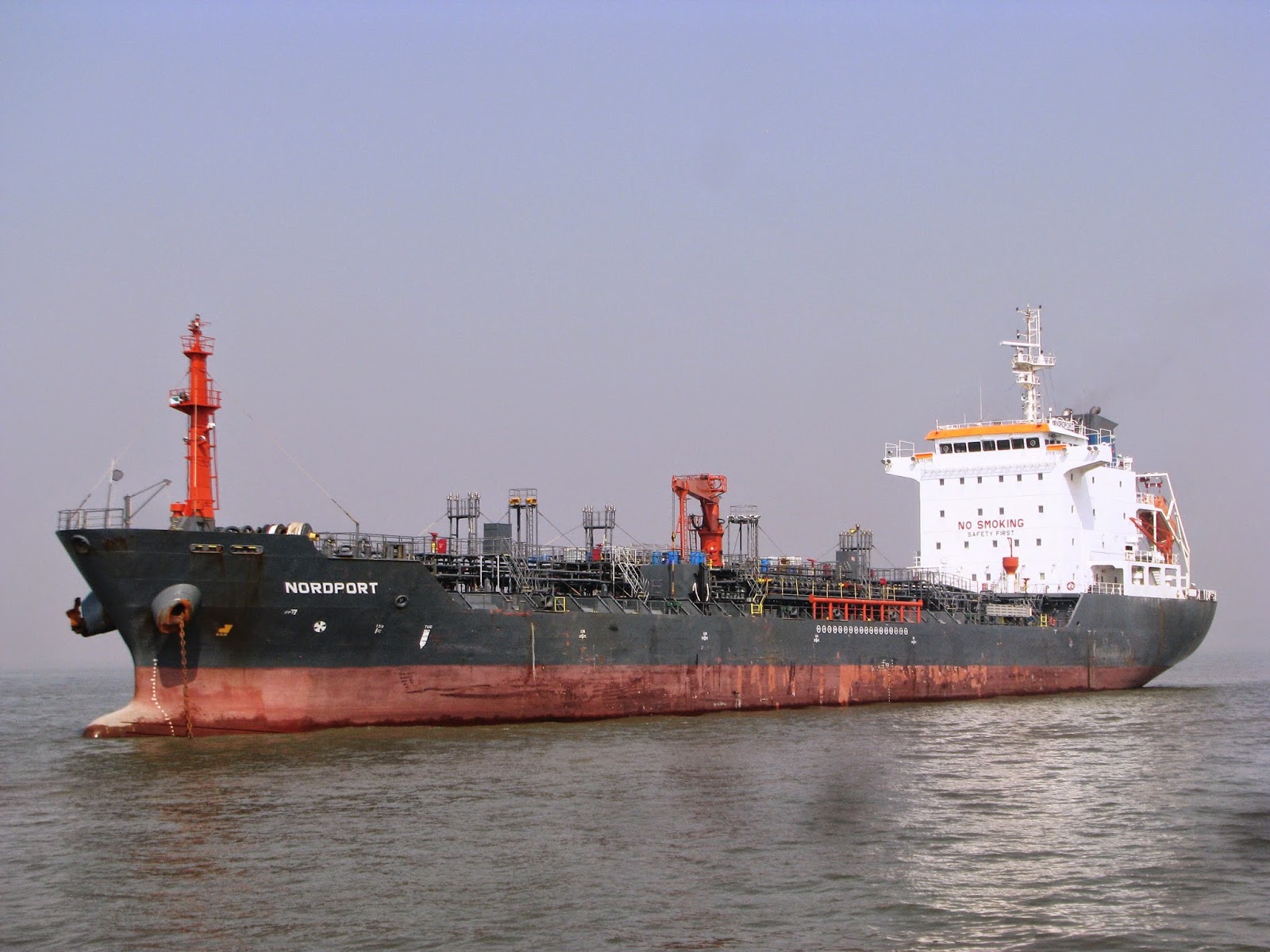 Looking at the crowd at Gateway of India I realized that Elephanta caves is not going to be pleasant. As expected there was huge crowd milling around, jostling, taking pictures. At other times the place could be quite pleasant. 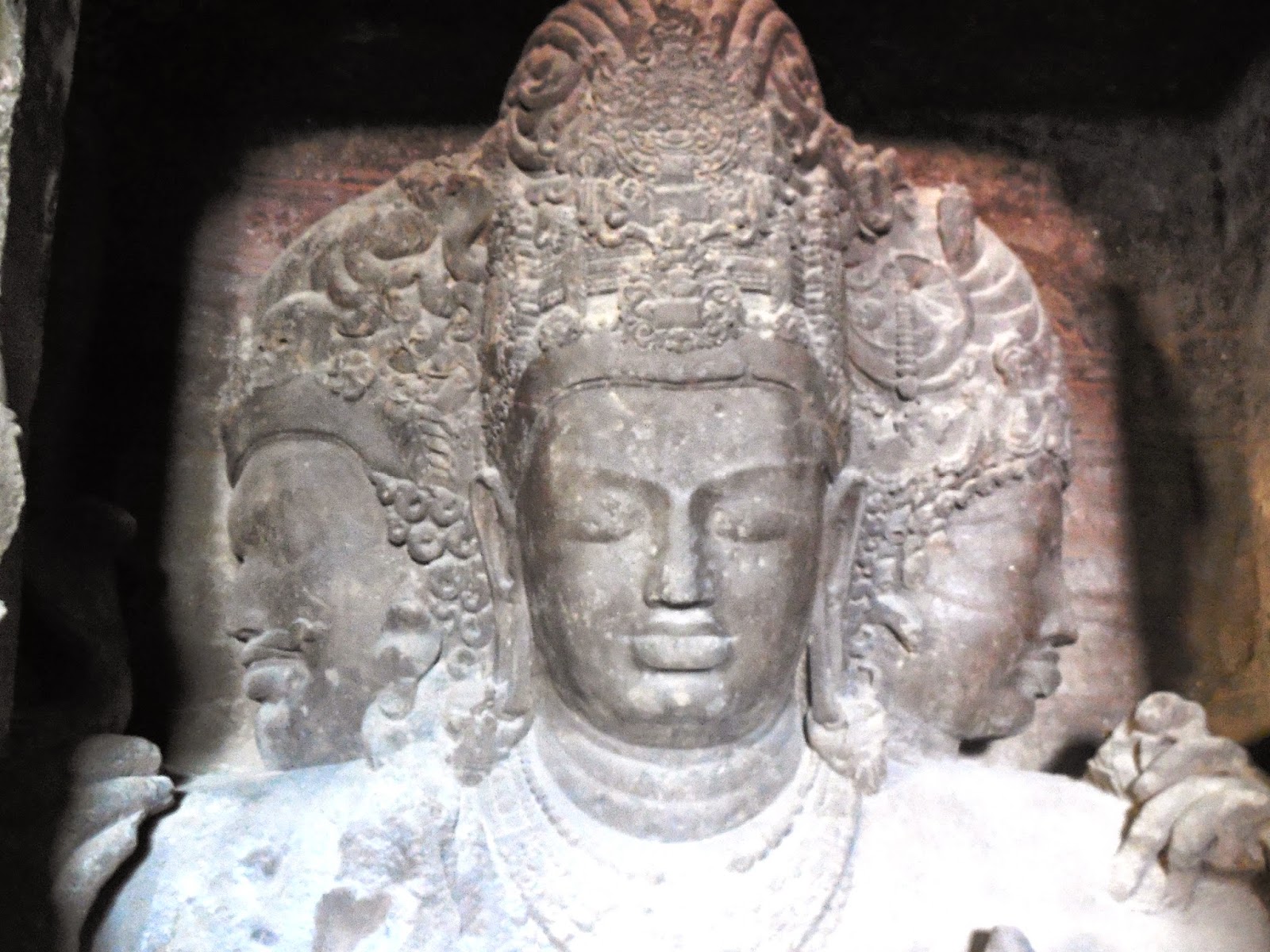 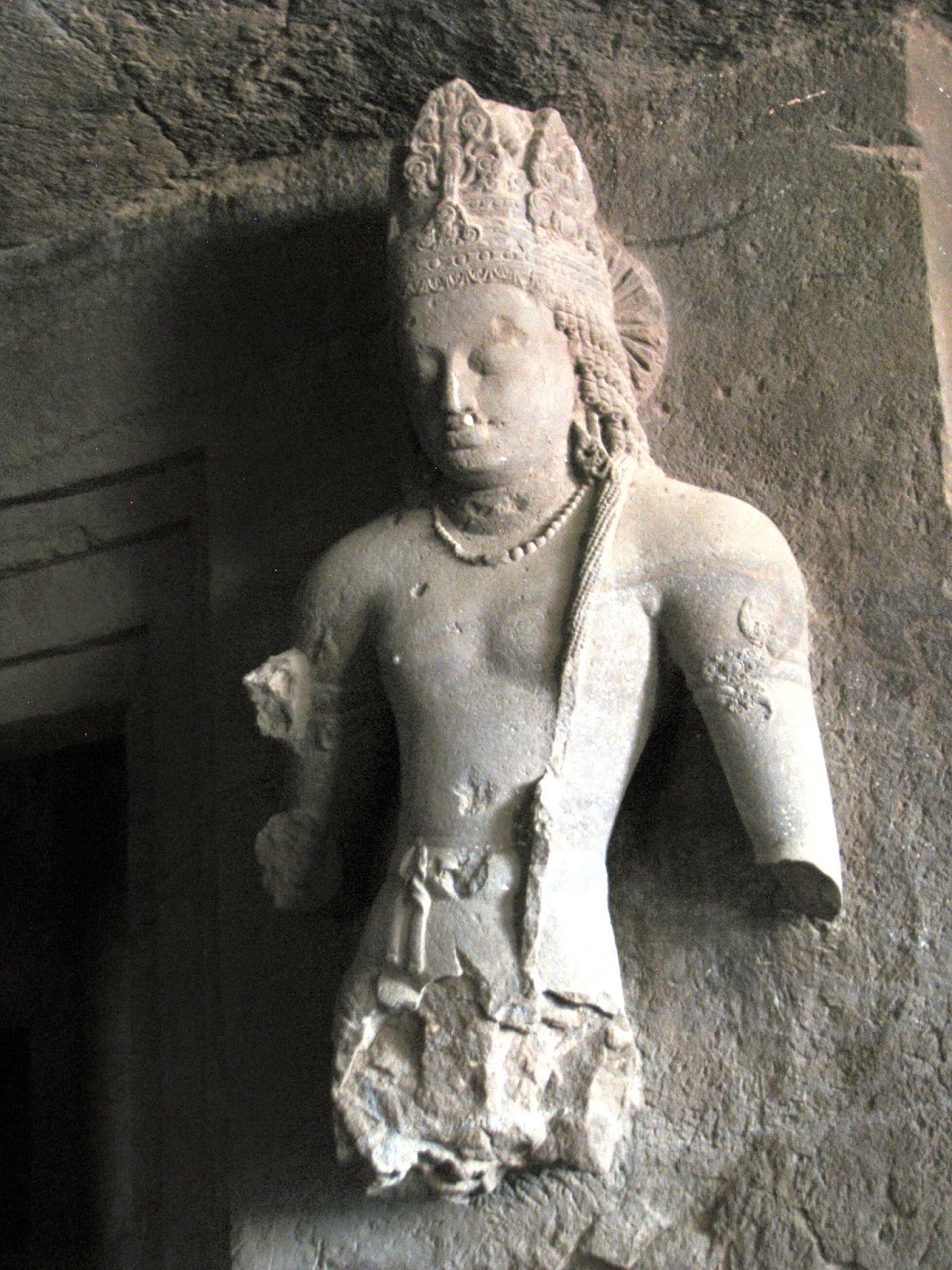 There is a toy train run by Maharashtra tourism from jetty to starting point for caves which was overwhelmed and we couldn’t ride on it. 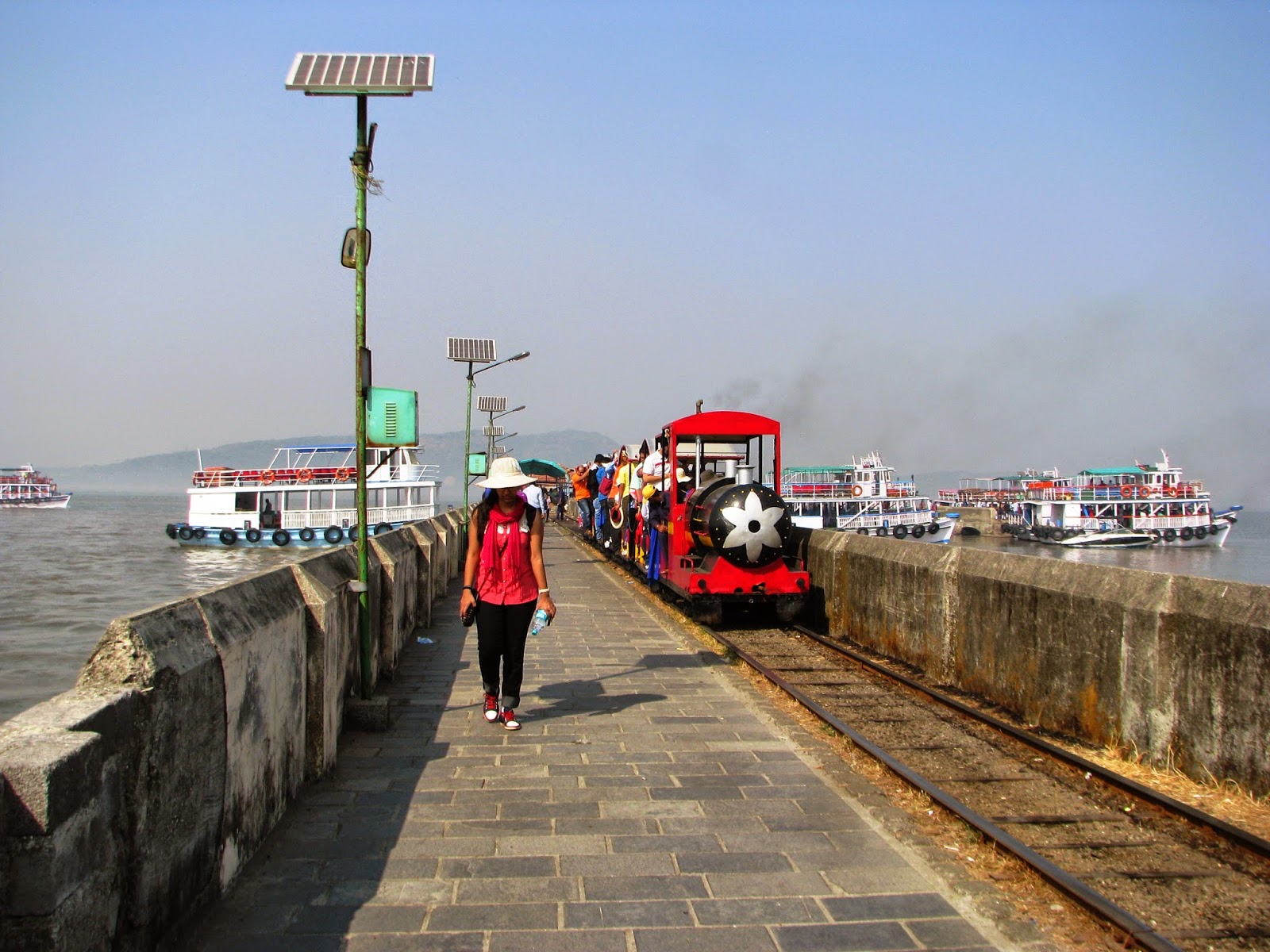 The return ferry journey was uneventful. After getting down it was almost evening so we decided to quickly catch sunset at Marine drive. We took a cab and went to Chowpatty instead. Its a small sandy beach at the end of Marine drive. You can rent achatai for Rs 20 to sit and watch sunset or make sand castles and have snacks. The food stalls thankfully are restricted to a certain corner so beach is relatively clean though water was still murky. The sunset was good though blocked a little by Malabar hills. 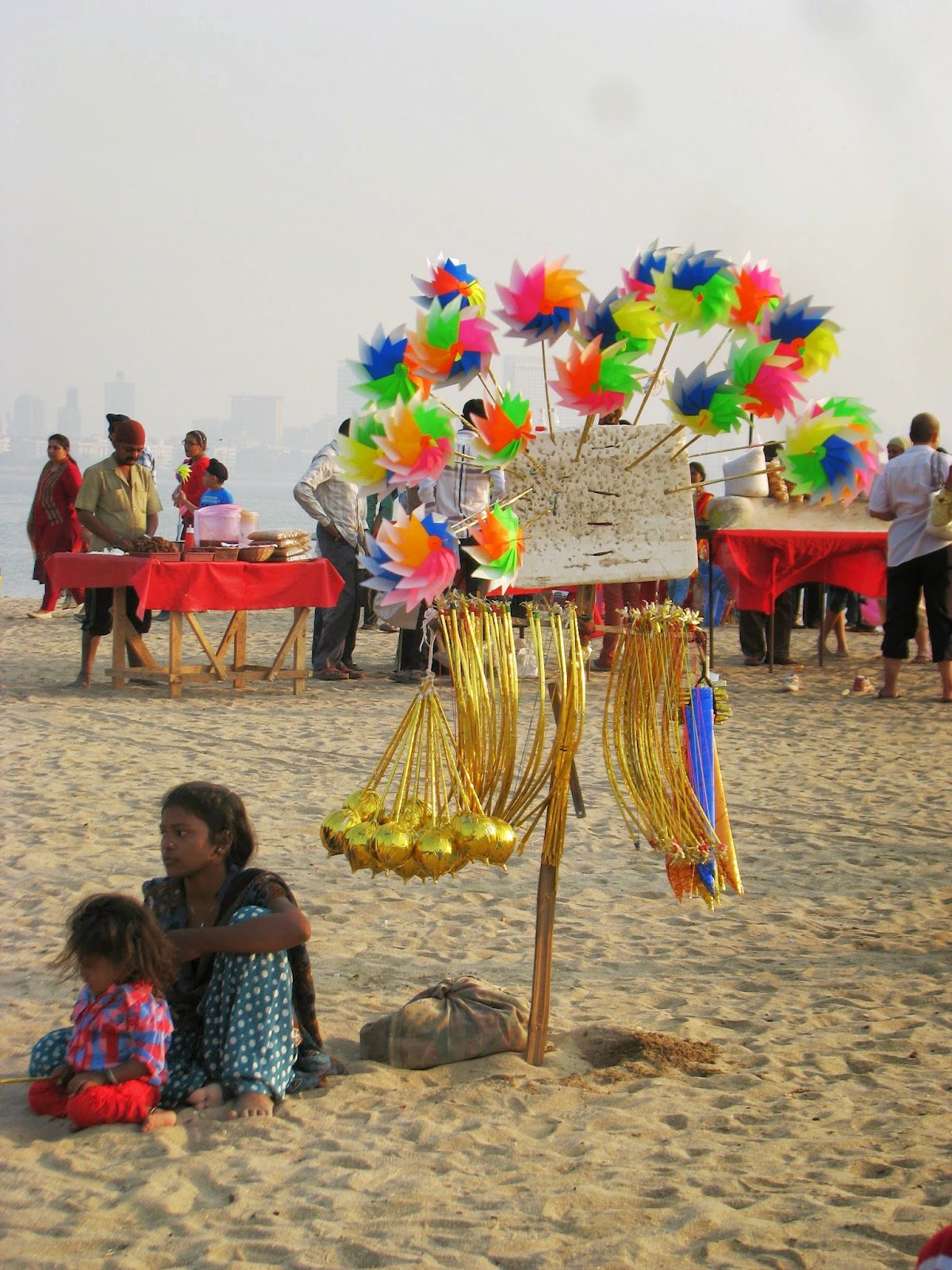 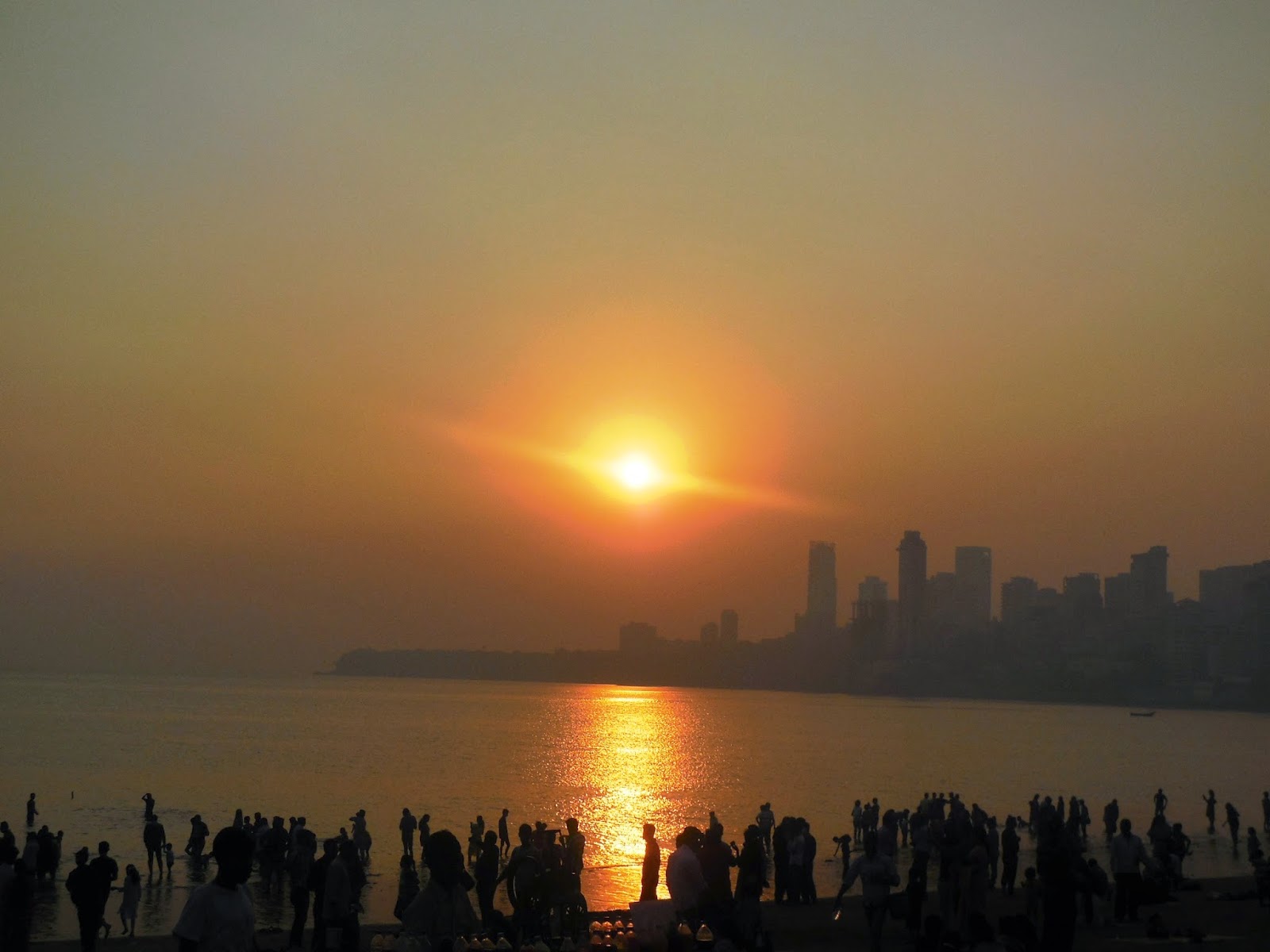 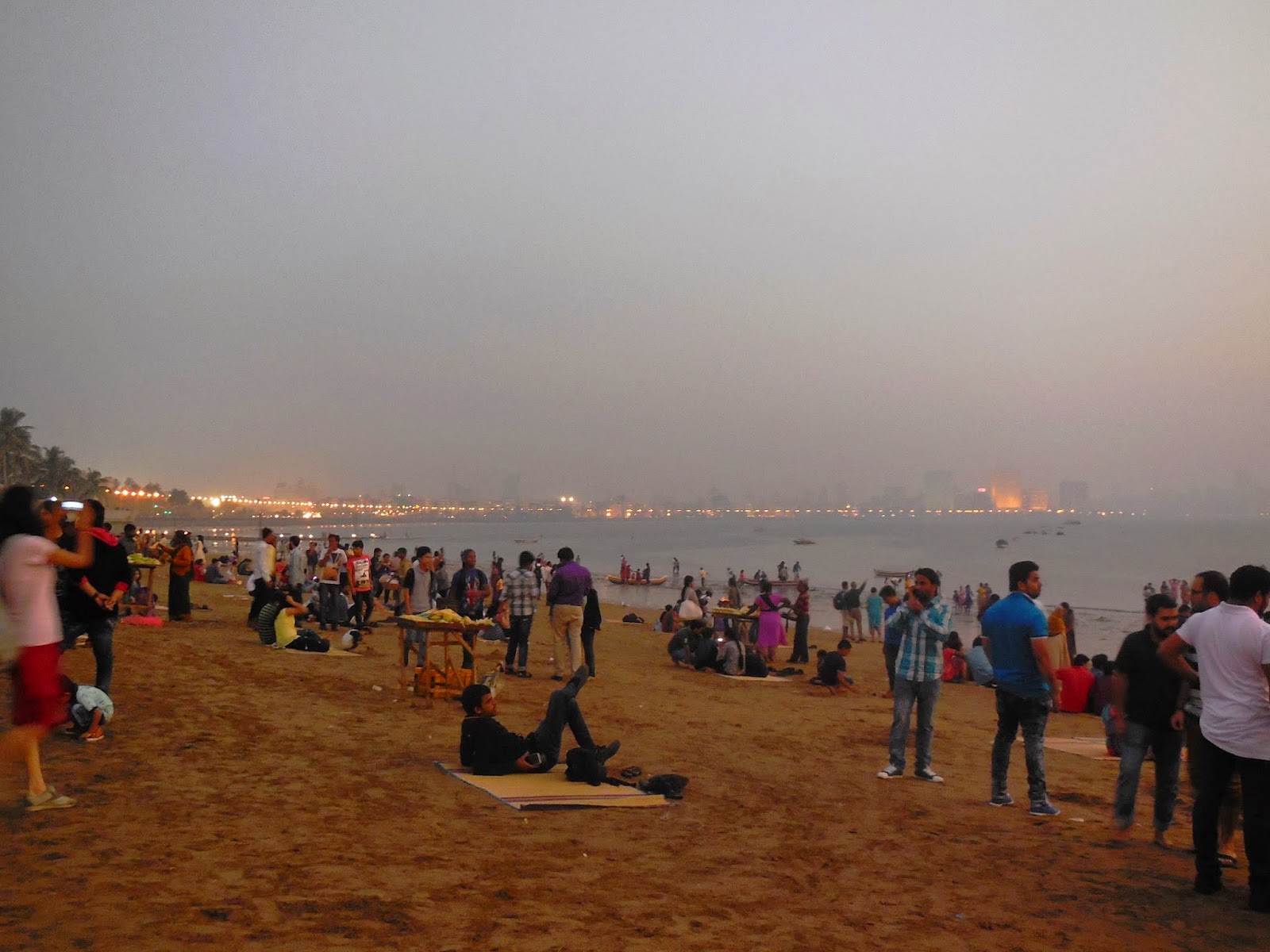 After some time we came back to hotel, freshened up and decided to go to Gateway of India again. Unlike afternoon the weather had cooled down, crowd was lesser, cool breeze with glittering Gateway of India and Taj Mahal hotel, it was quite enjoyable. 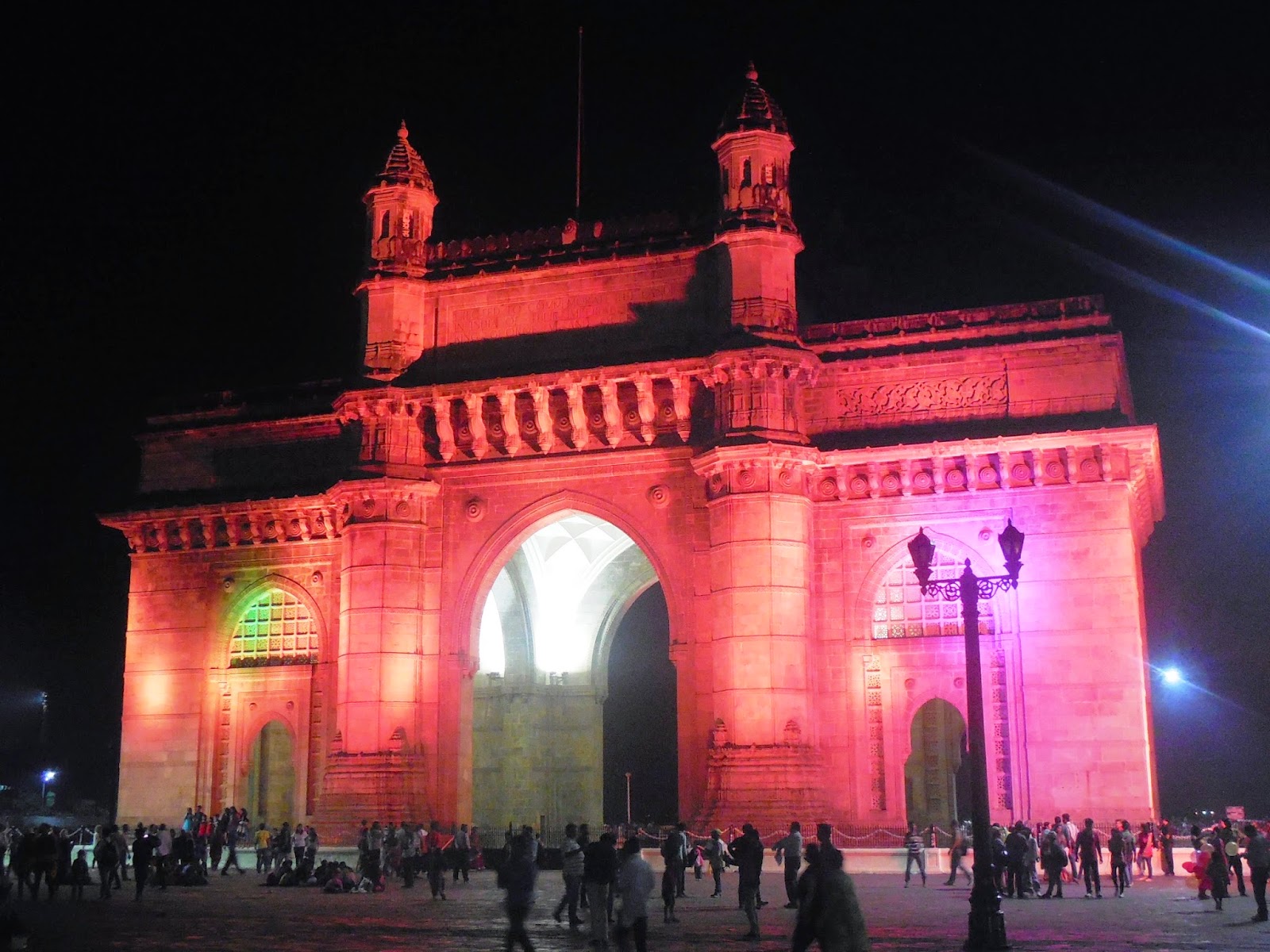 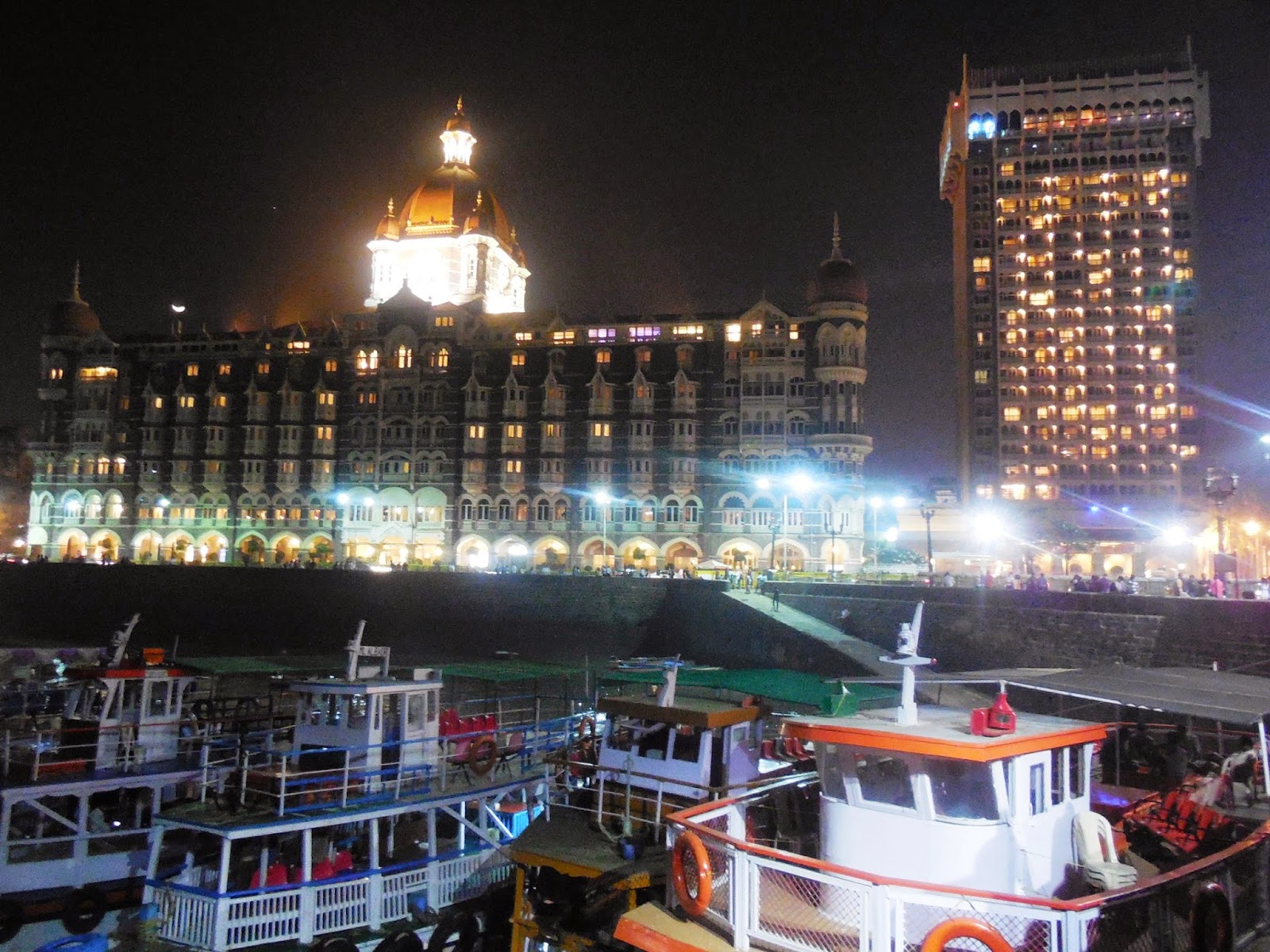 After spending some time, we decided to go to Marine drive again to admire the queen’s necklace as it is called. Marine Drive has one of the best promenades I can think of with wide and clean walkway. The marine drive and surrounding buildings were lit up nicely. 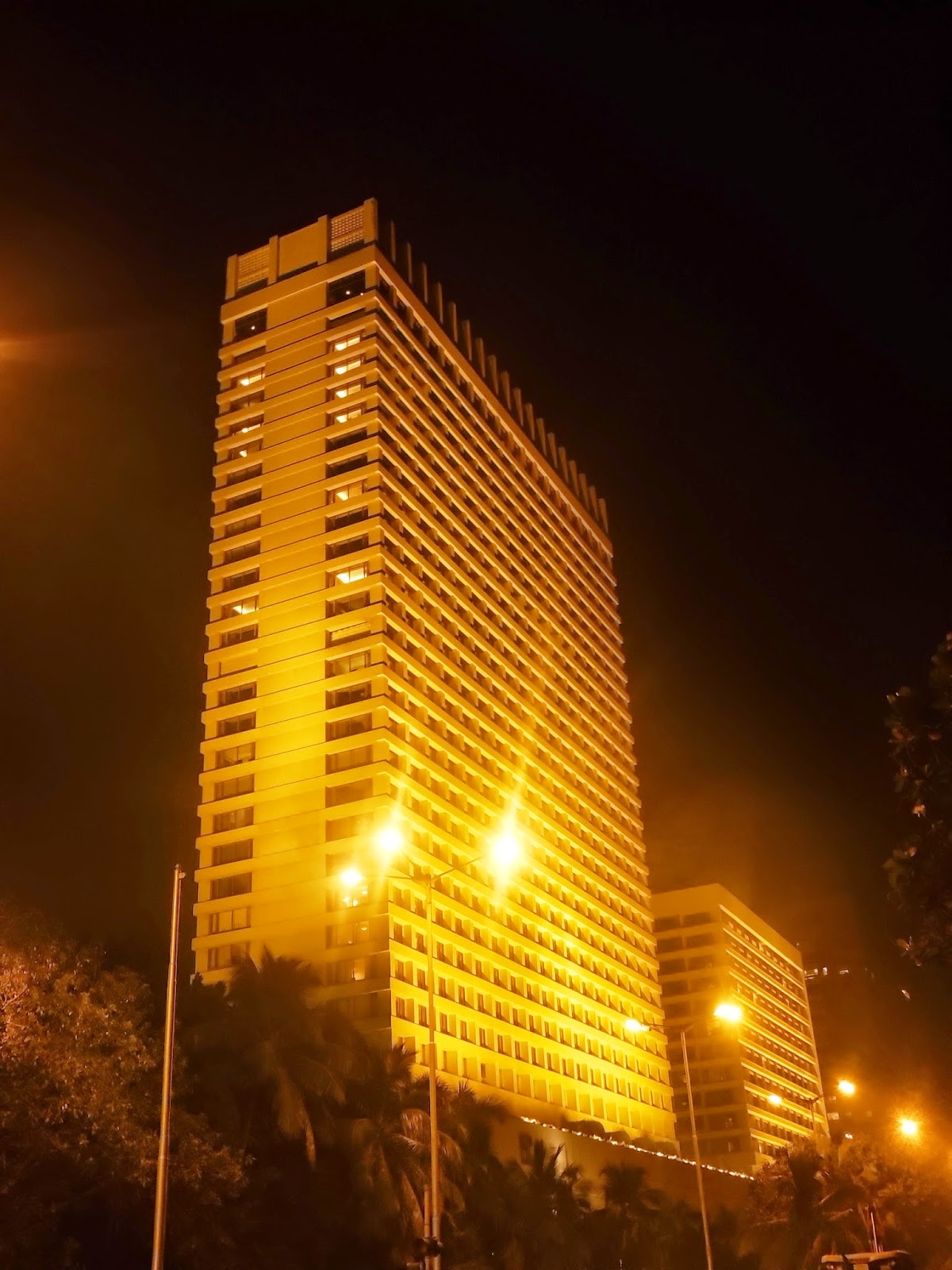 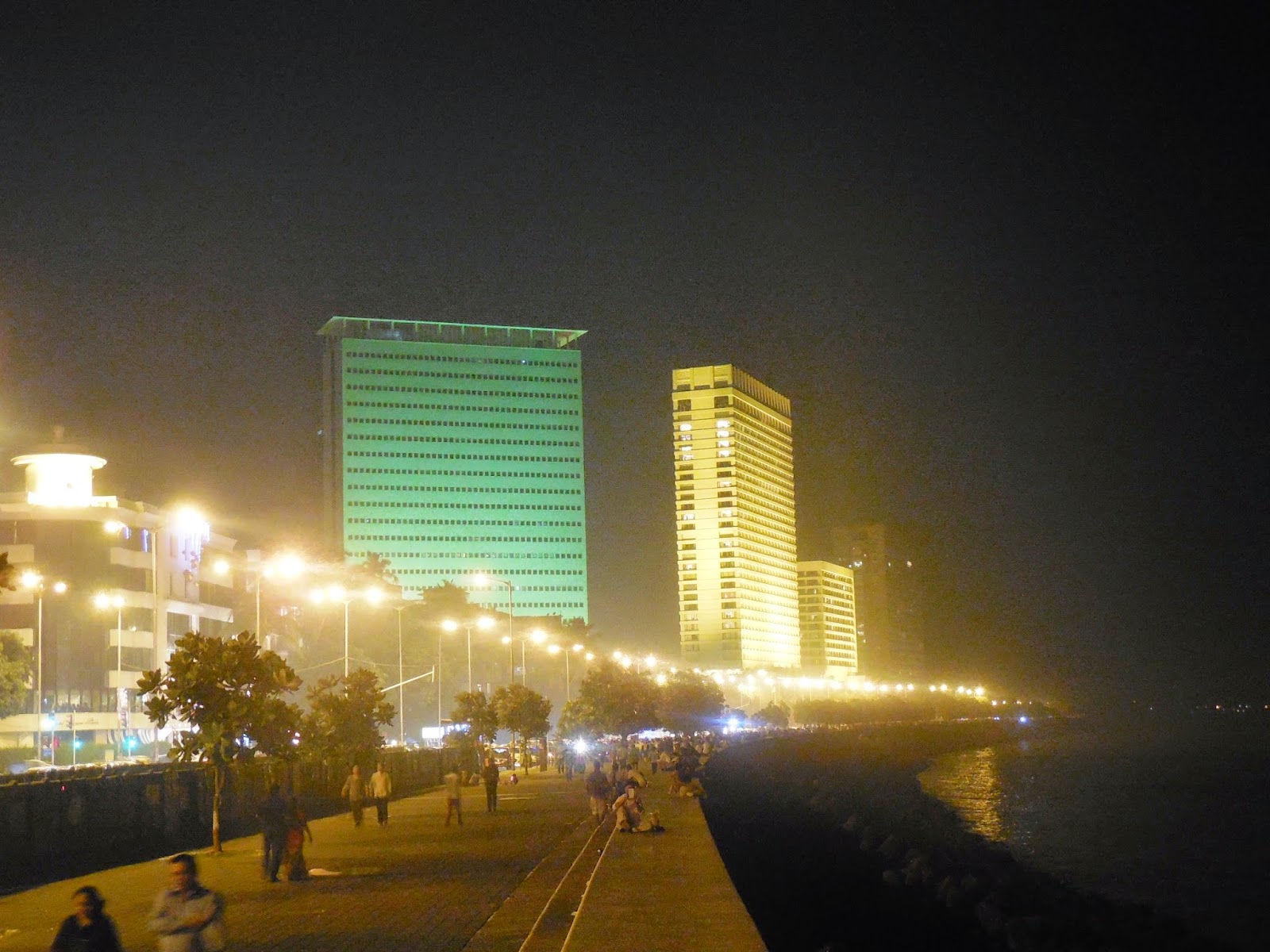 Marine drive all lit up

After strolling for some time, we took a cab back to hotel. While passing through the buildings along marine drive, I noticed that most of them end up with Mahal or Mansion in their name which is quite apt for the location.
Next day we started around 9 AM from hotel. The buffet breakfast was sumptuous. We first came to Marine drive and took stroll alongside. The scene had changed since last evening. Now it was morning and there hardly anyone around. We stopped 2-3 times along it to take in the air and view. 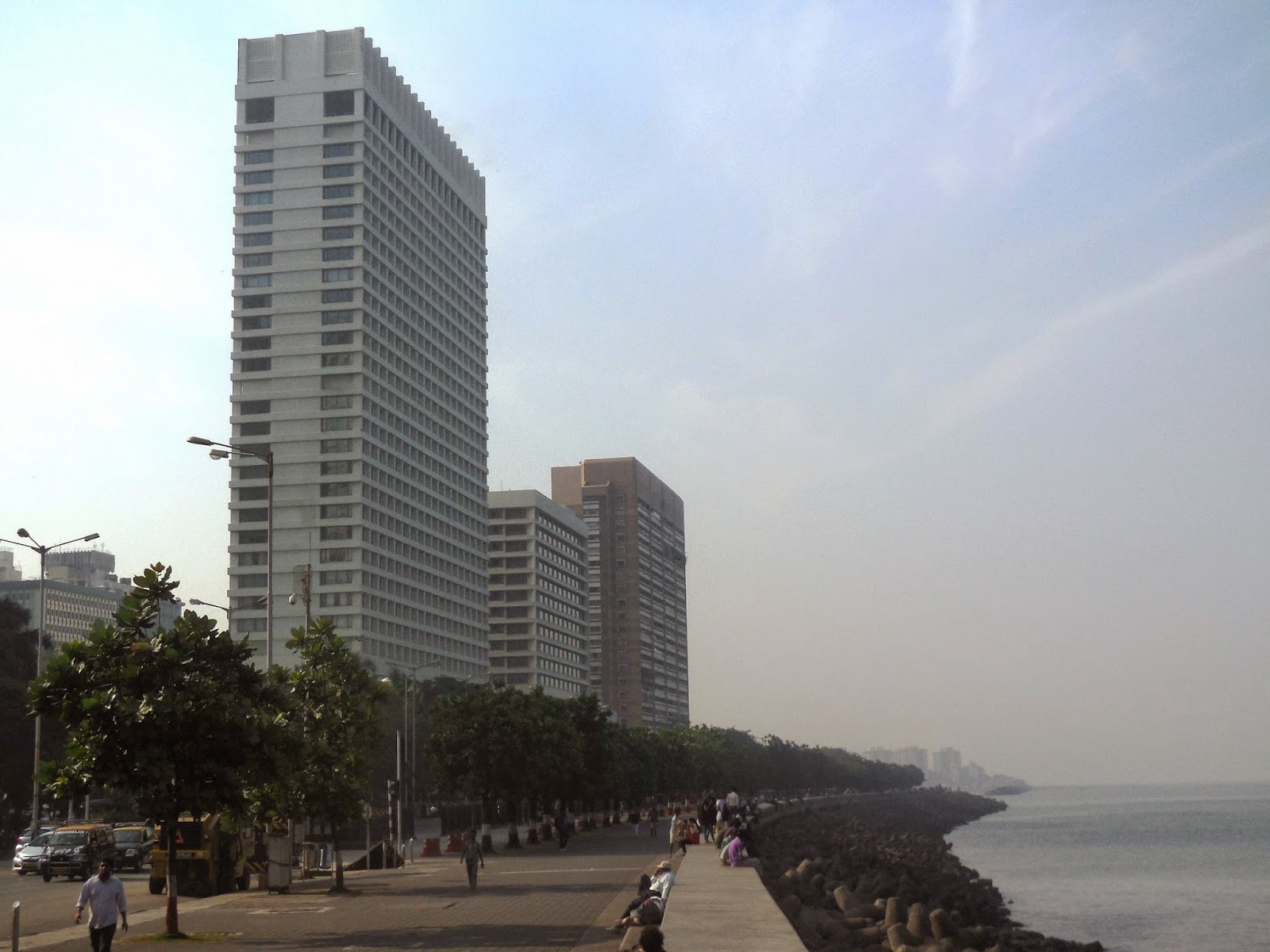 Nariman point in the morning 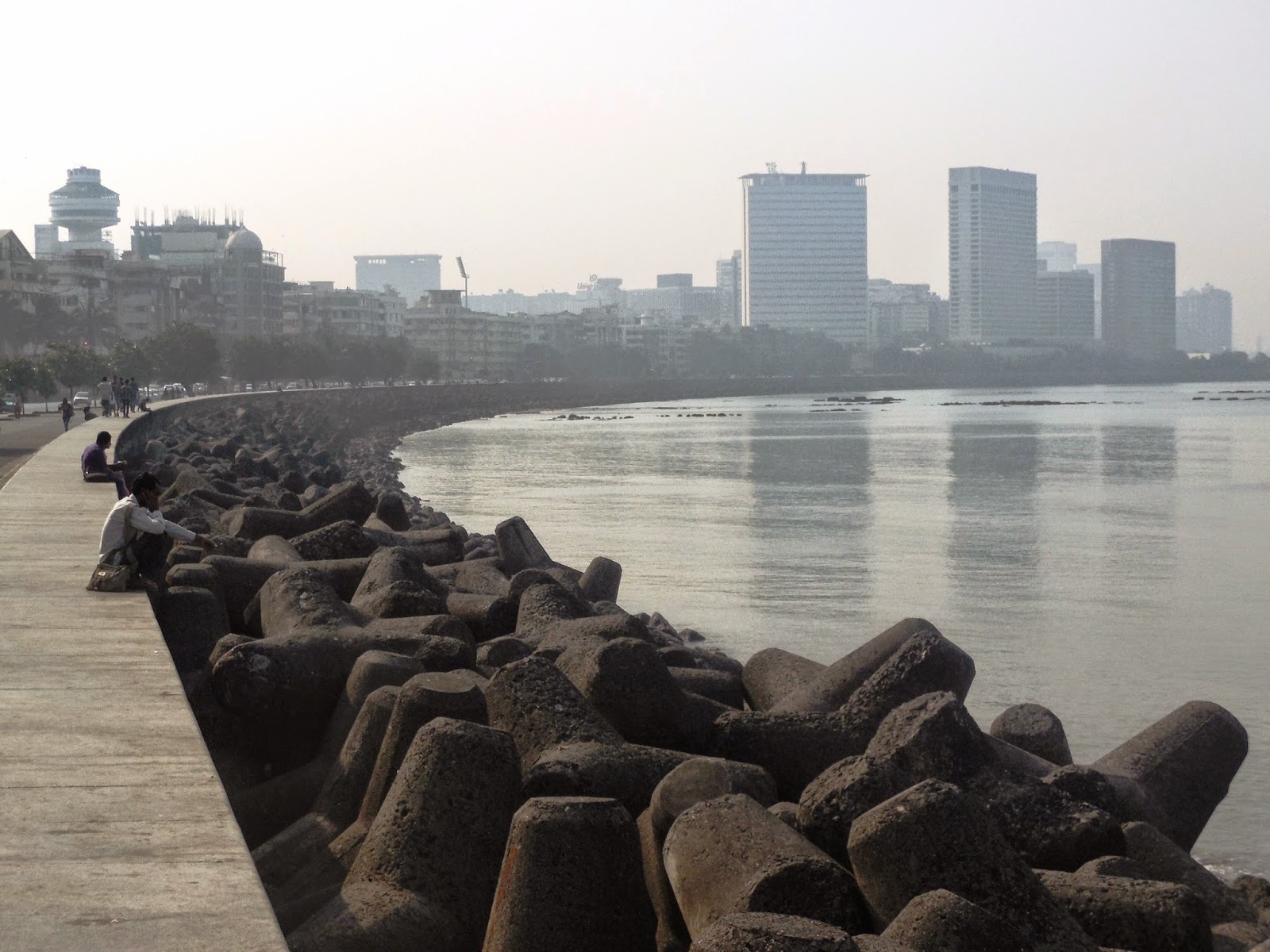 Marine drive in the morning 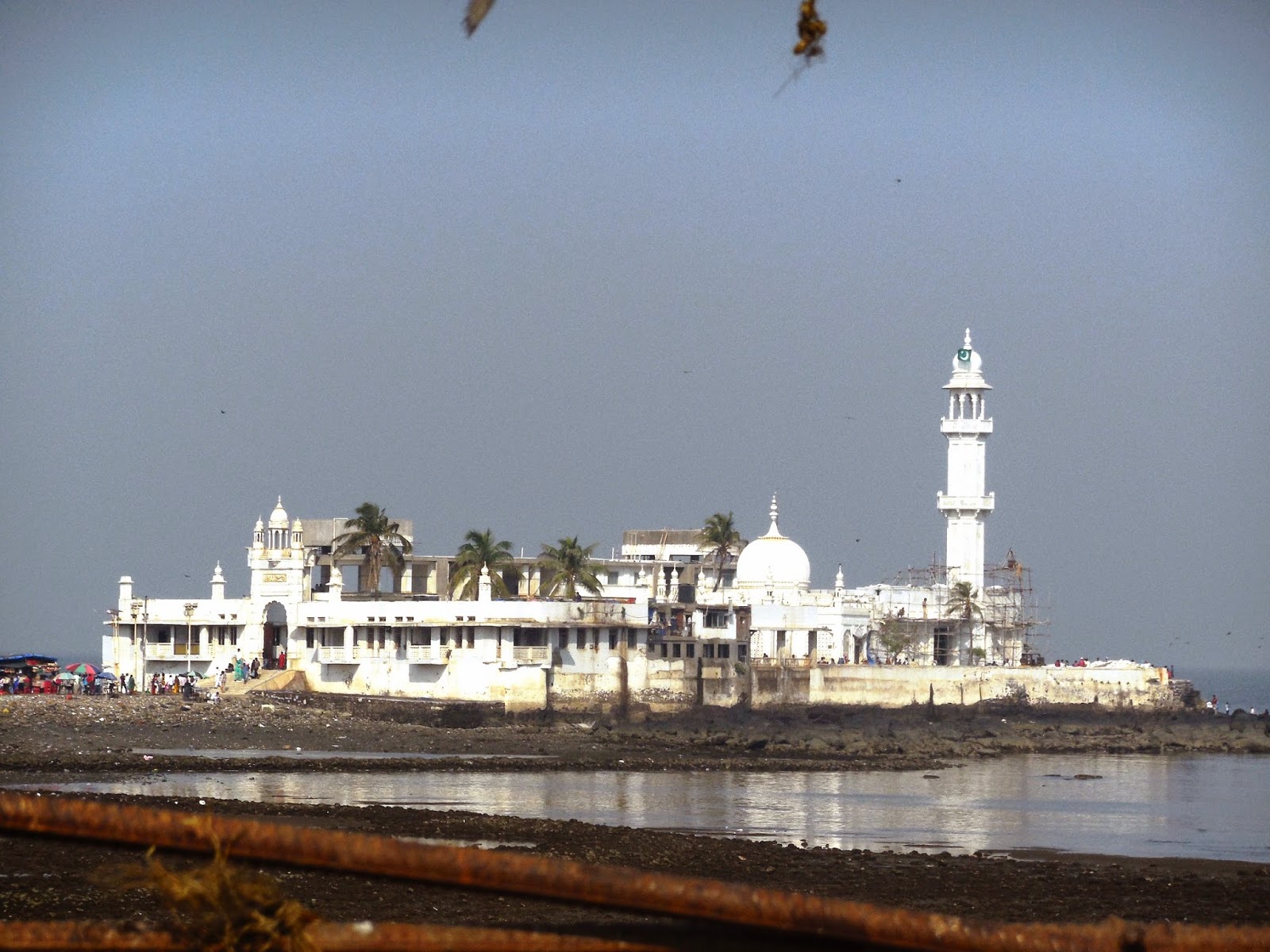 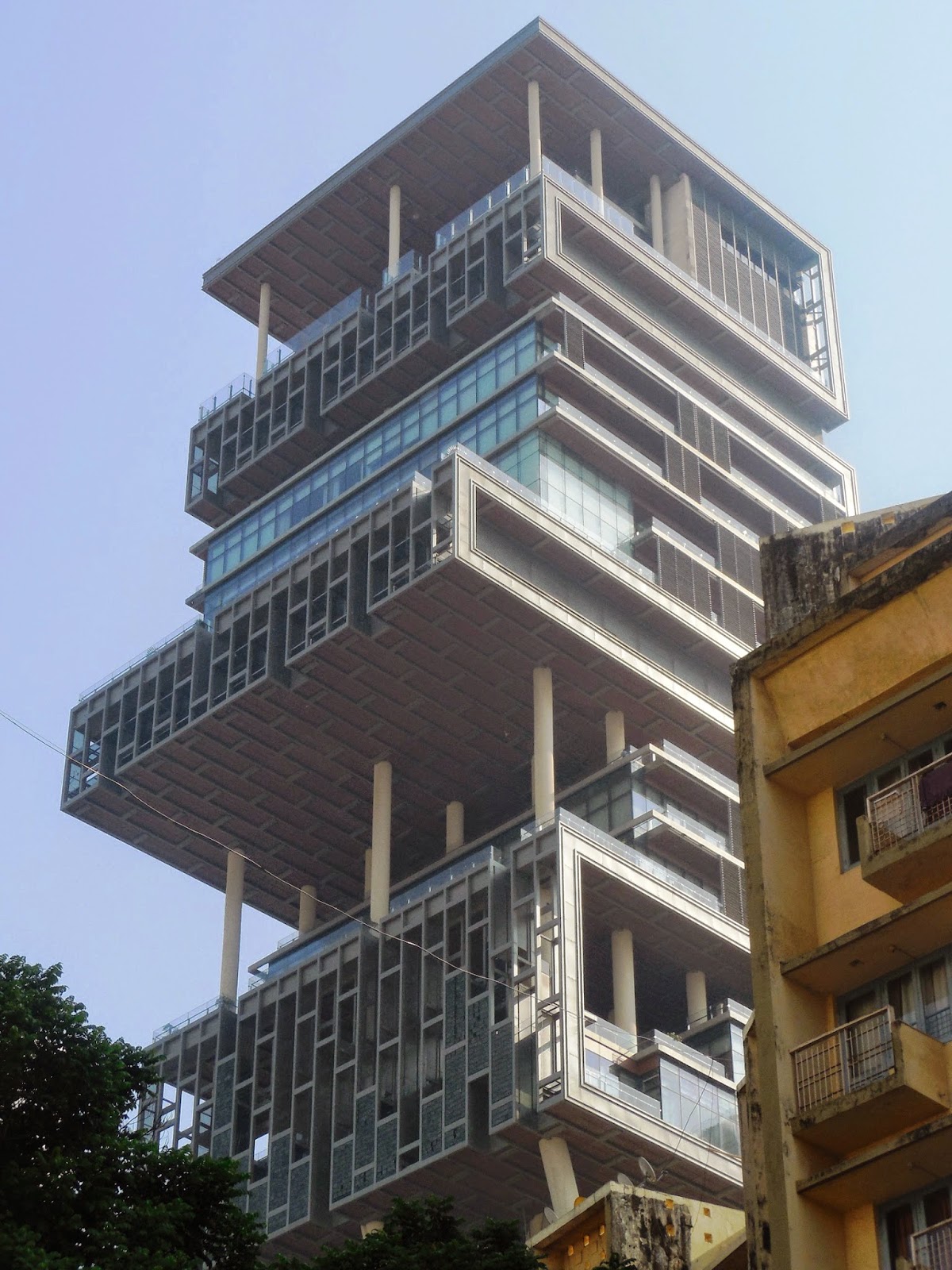 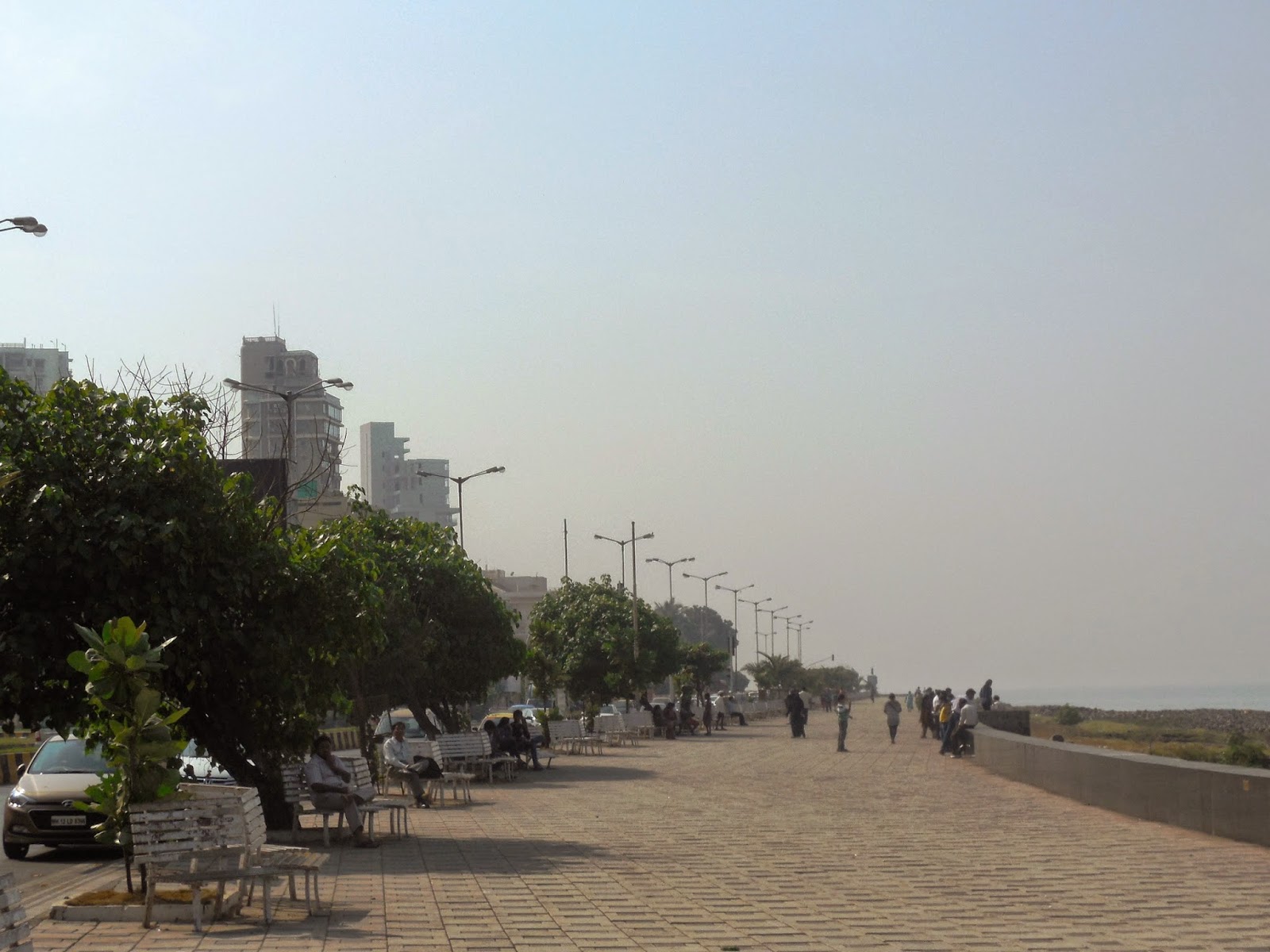 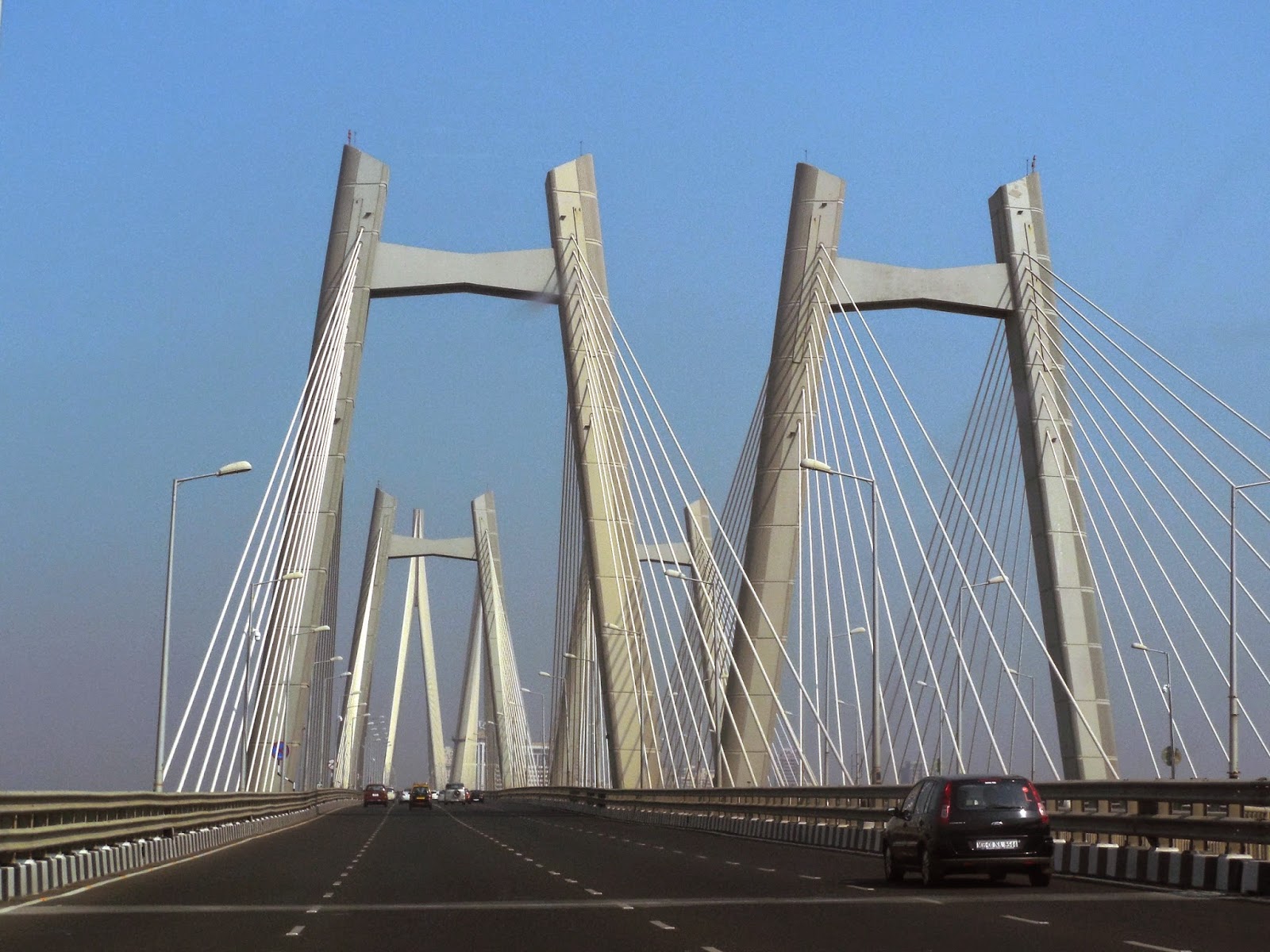 After that we went to Bandra bandstand. The rocks along the sea are favorite hangout for couples and many movie scenes have been shot along side. Later we came to Jogger’s park but it was closed during the day. 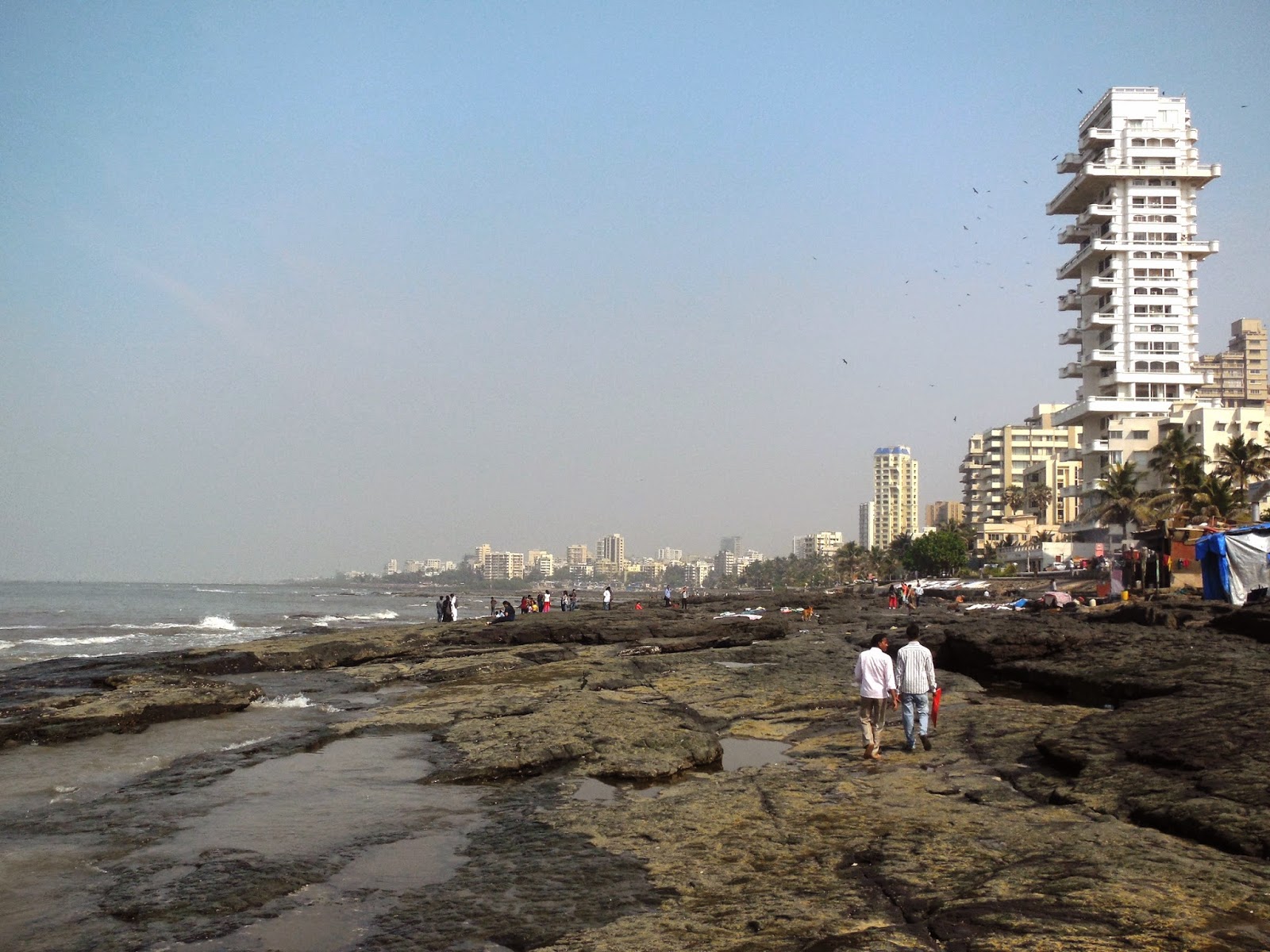 Being a rail, train enthusiast I was keen to experience Mumbai’s metro so we came to Versova station and boarded the train to Ghatkopar. The train was nice though I have heard that Mumbai transport planning lacks vision. There is another transportation highlight Monorail which I could not visit due to paucity of time. The train passed through some obscure places thankfully it connected main train station of Ghatkopar. 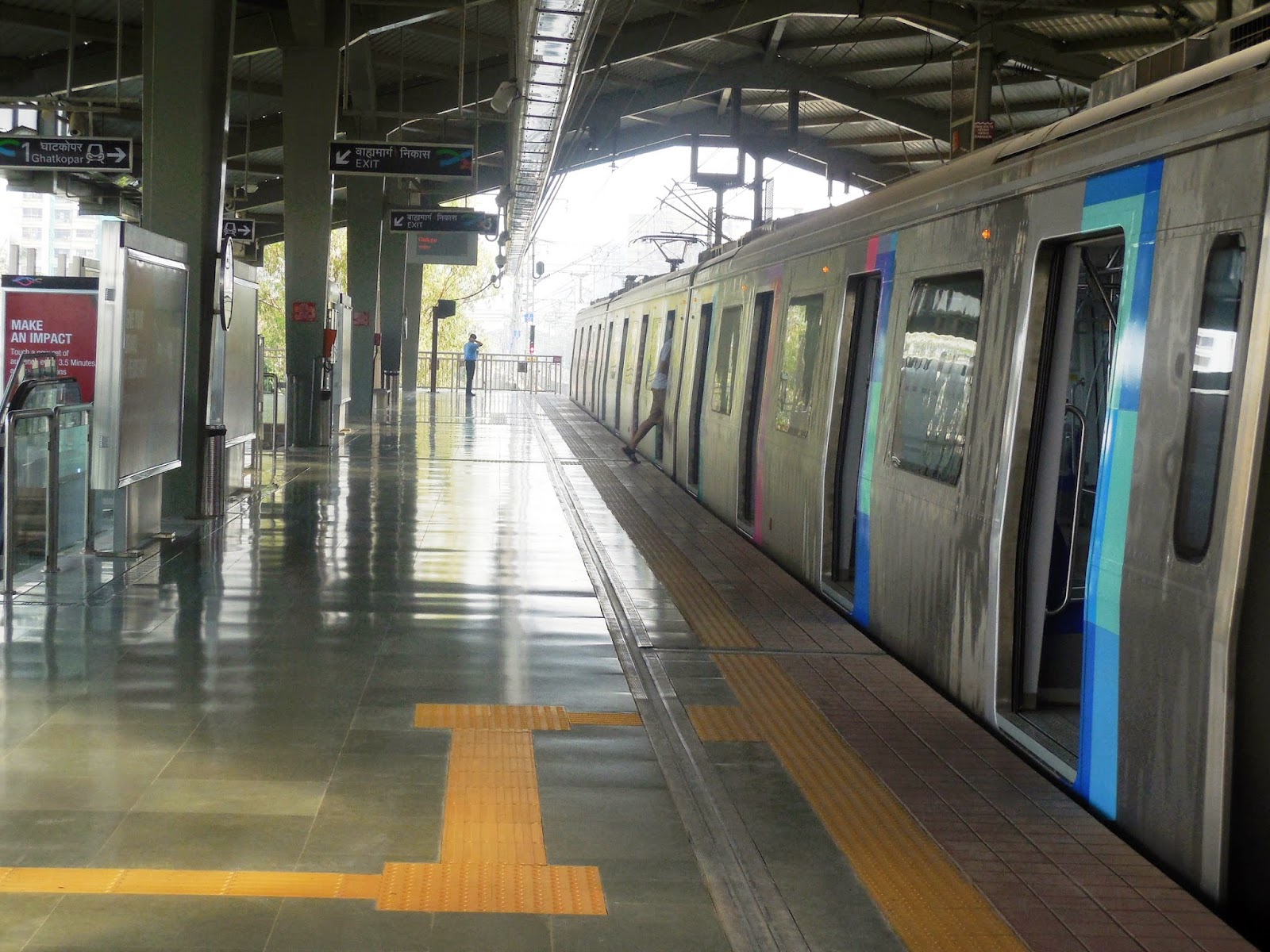 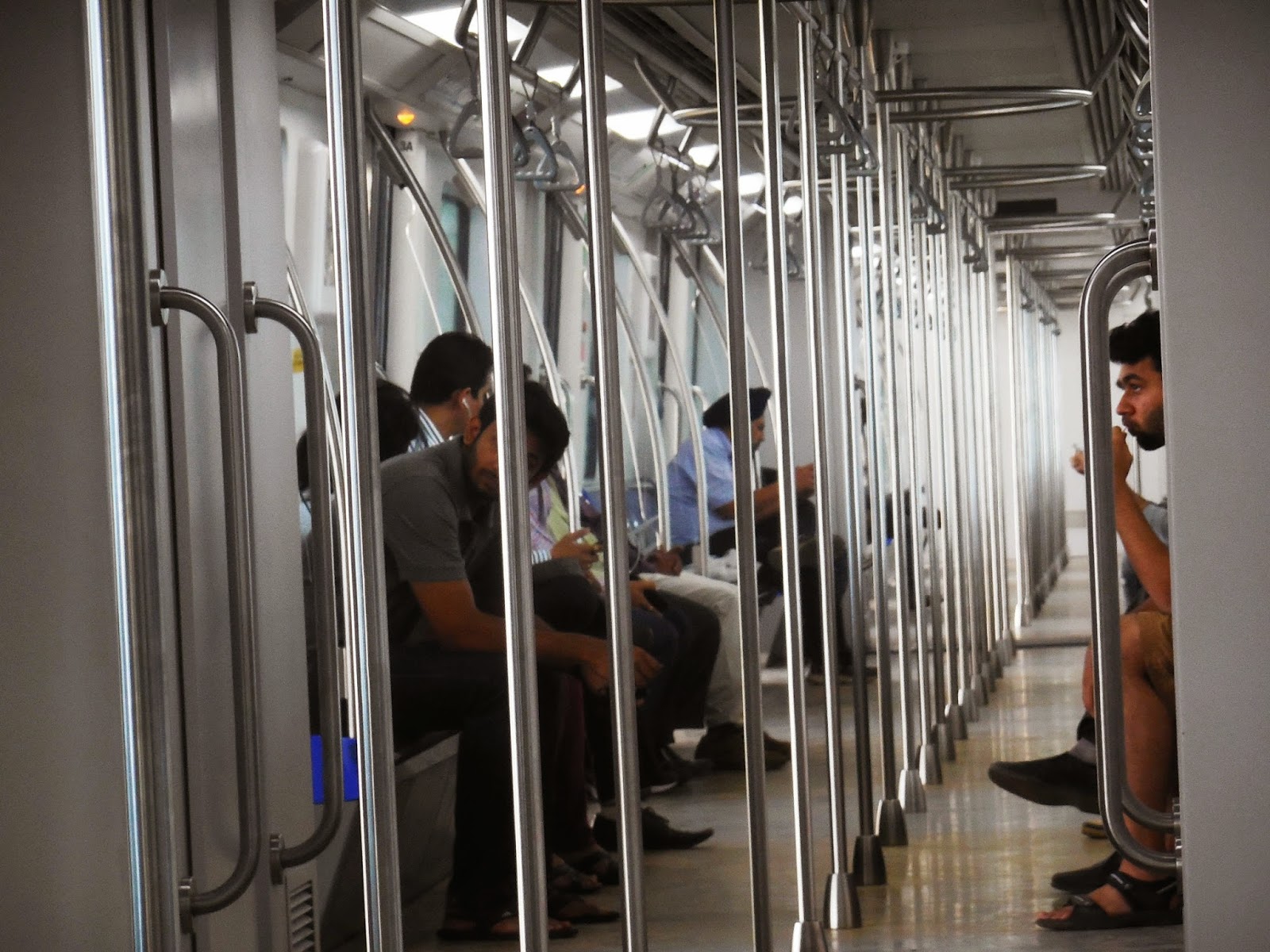 After round trip we went to Juhu beach which surprisingly was crowded. After some time we immediately pushed to Aksa beach in Madh Island so that we could enjoy the water a little before sunset and immediately check-in into our hotel. The drive from Juhu to Aksa took an hour but we made it with around an hour before dark. Aksa beach was less crowded and water was also cleaner. We splashed quite a bit in the waters which was a fitting end to the hectic day. 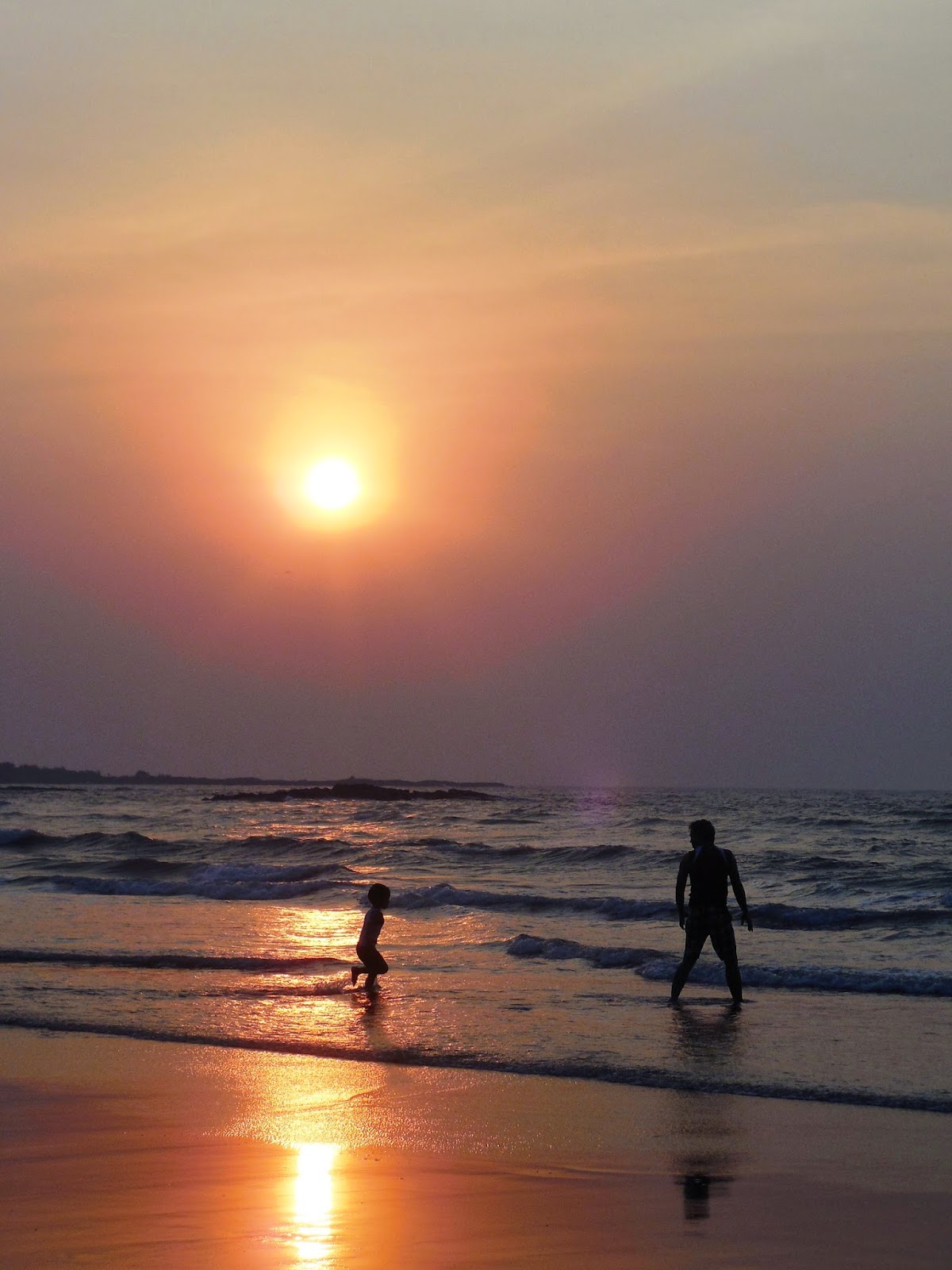 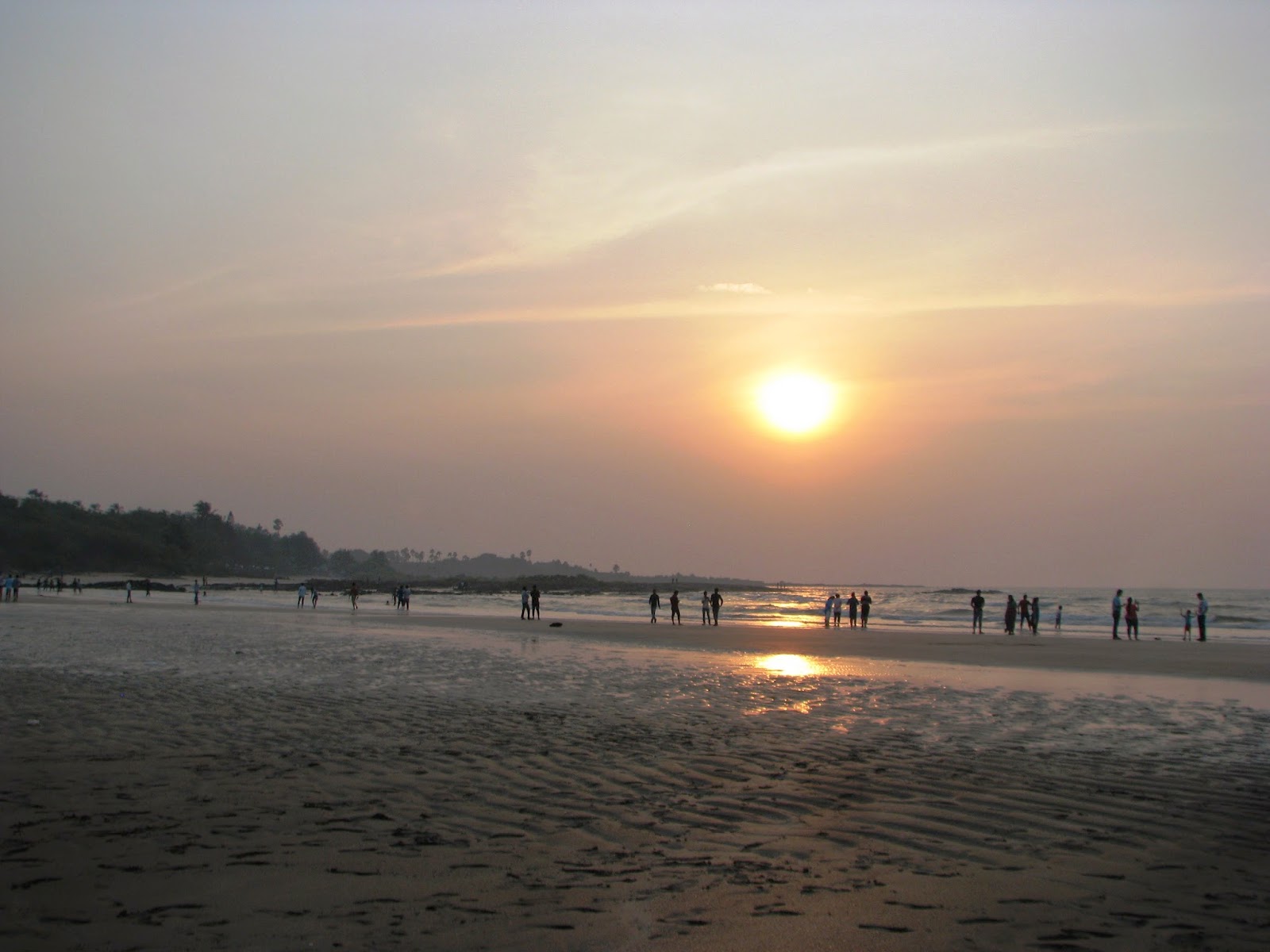 The Retreat & Convention hotel turned out to be a good property with good landscaping surrounded by tall palms. 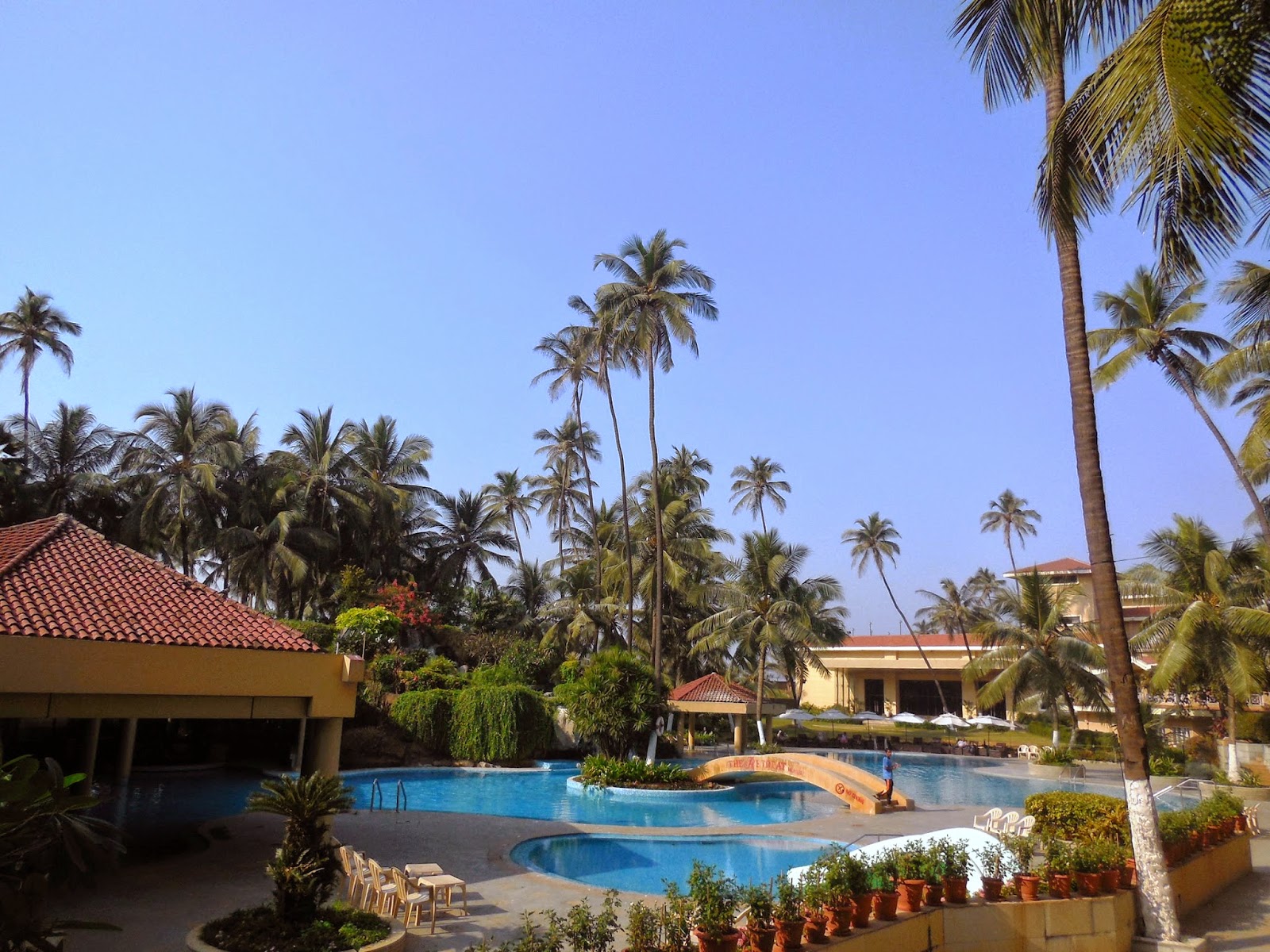 Next morning we checked-out and went to Marve (5 km from hotel) and parked vehicle there. Marve is one of the two points to go to Essel world. There are ferries every 30 minutes or so. After spending time on Essel world it was long drive cutting through Mumbai to get back to Pune.

We had gone on a short trip to meet relatives in London, and I had a great urge to see Scotland. I mentioned this…