Our stay in the city of Interlaken done (and the hotel reservations having run out), we decided to move to our next destination, the city of Lucerne (also known by the German name of Luzern). We were taking a train near noon from Interlaken (after having done a cruise on the Lake Thun). This train takes roughly around 2 hours to reach Luzern while passing through some beautiful Swiss countryside (lakes, water bodies, hills, greenery, woods, grasslands, great looking houses and churches, you get the idea). The only problem that we faced was that this was the month of July, and for some unknown reason, the trains that we traveled in were not Air-Conditioned and hence it got uncomfortable for some time. 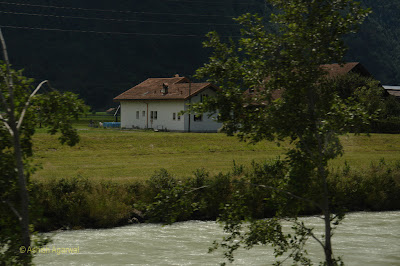 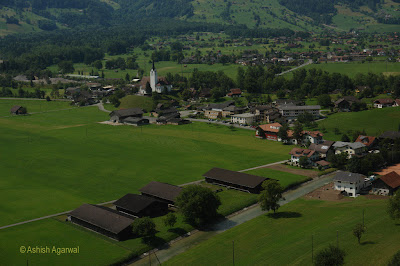 Views of Swiss countryside on way from Interlaken to Luzern

Finally we reached Luzern (it looked like a much larger city that Interlaken, as proof, the train station was much larger than the train station of Interlaken). At the Lucerne train station, we started trying to figure out how to find our hotel (the Magic Hotel); there was no easy way to locate our hotel from the railway station. However, once you are unafraid to ask anything, you can get to know anything; so we asked around and were soon pointed to cross the bridge right next to the railway station, and from there, the hotel was to the left side. The Magic Hotel was affiliated to the Best Western Hotel Krone over there, with the checkin to be done in the hotel Krone and the keys for the room at the Hotel Magic would be given after registration. Checking in one hotel for another hotel seemed a bit strange, even more so that the Magic Hotel did not even have a reception, but it was not really a problem. The good part about the Magic Hotel was that it had free internet access (wireless), unlike the hotel Oberland in Interlaken where the internet access is charged.

Map of Luzern on Google Maps:

Lucerne (also called Luzern in German) is a very beautiful city located on the shore of Lake Lucerne. It is the starting point of cruises on the Lake, it is the starting point of the ride on gondolas and cable cars all the way upto Mount Pilatus, it has a large cultural center called KKR, it has a monument called the Lion Monument (that commemorates the hundreds of Swiss Guards who died when the Bastille was attacked during the start of the French Revolution), and it has a split city, with a modern section, and an old section where the architecture of the city is maintained.
The best part about the location of these hotels was the easy access to some of the better parts of the city. As soon as you get down from the hotel, you find yourselves in a large square surrounded by great looking buildings. Right next door is a staircase that leads down to the lake side (the shore of Lake Lucerne). This is a fascinating place to be near – there is a great view of the Chapel Bridge, there is a whole line of open air tables and covered restaurant place with a huge number of tourists eating, drinking, and generally enjoying themselves (without making a great mess or noise). 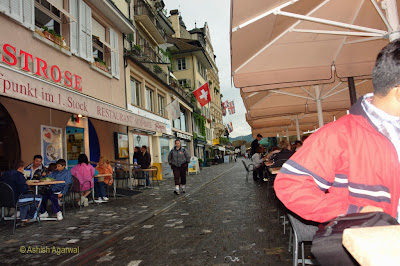 Soon, we found ourselves roaming the old city on foot. We spent some time on the Chapel Bridge / Kapellbrücke (Wikipedia), and its water tower, the 140 feet (43 m) tall Wasserturm (Water Tower). The Bridge is made from wood, and looks very beautiful, especially in the evening with the lights on it shining on the water (at this point, the Lake Lucerne is only as wide as a stream). We got caught in a shower for some time, and spent more time in the Bridge than we wanted. Lining the side of the Bridge are some exceedingly beautiful flowers.

People rushing to enter the Chapel Bridge, it’s evening and its raining 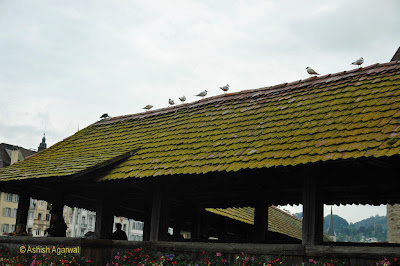 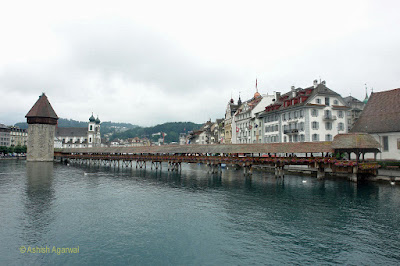 View of Chapel Bridge from the main road bridge in Lucerne 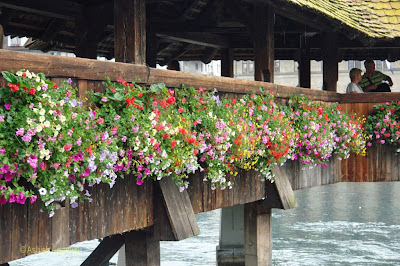 After the rain was spent, we moved onto touring through the old part of the city, and along the lake front (where there were a huge number of ducks and swans that would come very close to you, to the point where you would feel more in danger than they would feel from you). There is a large shopping area, and a very large eating and dining area. Just after the rain, the place looked even more magical, and we had lots of fun roaming through the city. After some time, we went looking for the Lion Monument (it was at a walk of atleaset 25 minutes), and when we found it, it was somewhat disappointing. 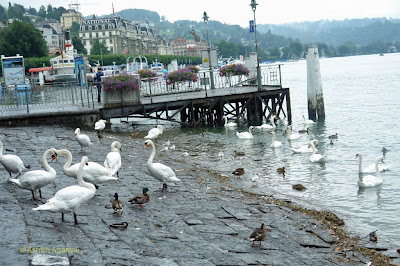 Many ducks and swans on the lakefront of Lake Lucerne

One of the shopping roads in Lucerne, empty after rain 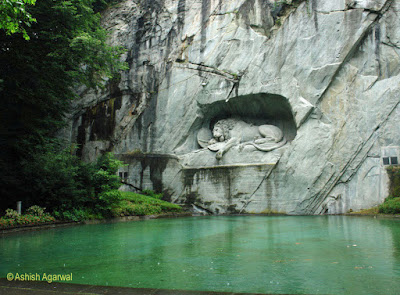 Photo of the Lion Monument in Lucerne

More photos of Luzern at my photo gallery (link)

Trip to Switzerland: Part 5 – The city of Lucerne (aka Luzern) was last modified: August 24th, 2019 by Ashish

The previous installment of this series covered reaching the small city of Interlaken in Switzerland, and the disappointment of not being able to do…