After the fairly long journey getting to Jungfrau (3 separate trains is no joke), you reach the underground train station (in fact, a large portion of the infrastructure at Jungfrau, is underground – or more accurately, built into the side of the mountain under ice and rock). You get out of the train station, and into the multi-level structure. This multi-level structure has different establishments at different levels – you have the restrooms, sovenier shops, restaurants (Indian, European, Chinese cafe (with a variety of soups, noodles, sandwiches, and other quick eat stuff)), exit to the Ice Palace, exit to a balcony type structure that leads to a great view of the long 14 mile long Aletsch Glacier, an exit to the Sphinx Tunnel (that leads to an elevator that rises more than 100 m to the Observation Deck).
So, let us take it step by step. The first thing we did on reaching the place was to take our breath (and that too deeply); it is not unknown to feel some discomfort because of the height. Once having rested and having had some soup noodles from the Chinese open cafe, we were ready to explore. The first thing we did was to head to the glass revolving door that leads to a balcony / corridor sort of structure which provides a great view of the Aletsch Glacier. It was a great view from there, and se spent some time just admiring the view. There were also some black birds perched on the railing, and I was trying to get a good photo of the birds without scaring them away. They let humans come close without flying away. We had gone in July, and even though there was a glacier all around, the temperature was certainly not at freezing level.

The 14-mile Aletsch glacier as seen from Jungfrau 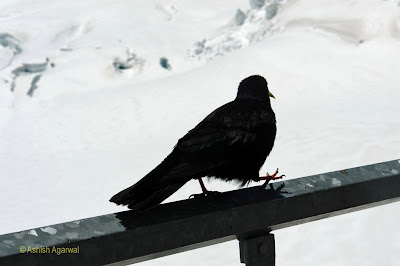 Blackbird balancing on one leg at Jungfrau

After spending some time over there, we decided to enjoy the other major attraction of the place, the ‘Ice Palace’. This is a cross-work of tunnels built inside the slower moving portion of the glacier, and has figurines inside made in the shape of animals and birds. The place has a slightly green color, and you have that feeling of being surrounded on all sides by ice; in fact, sometimes you need to hang on since the floor can be a bit slippery (after all, you are walking on ice with a tinge of water). It feels great, although there is that paranoid feeling about what would happen if the glacier suddenly moved ? 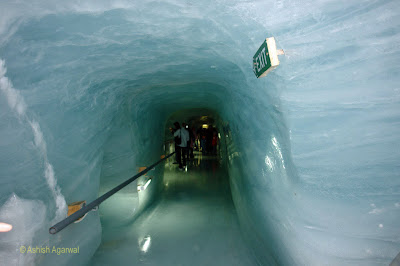 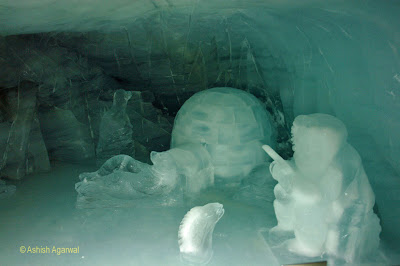 Next on the visiting area is an exit to another glacier. This is a place where you can actually walk on a glacier (cordoned off at the sides) where you can gather snow, watch water forming small channels, and get some great views of the surrounding vistas. We had lots of fun at this location, what with a mock snow fight, lots of posing, and the feeling of walking slowly at some of the points where the ice was either slippery or slush had formed due to water and snow. At the same time, there were kids running wildly on the same snow – the feeling of being young ! 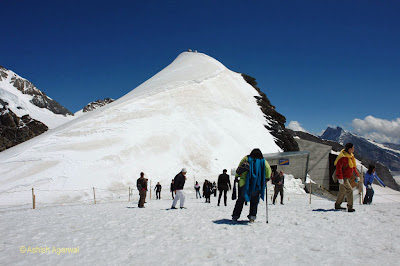 Tourists enjoying on the glacier next to Jungfrau

Tearing ourselves away from this location, we proceeded to the next destination, the Observation Tower. This is a platform built higher up on the mountain, and is reachable from the main Jungfrau complex through a tunnel called the Sphinx tunnel and then a lift that climbs 100 meters. It remains crowded, but the platform offers a great view. It is a metal platform, supported on the mountain slope, although you can see below that there is infact a sheer drop right below the metal grid that makes the platform. As can be expected, you get a great view. 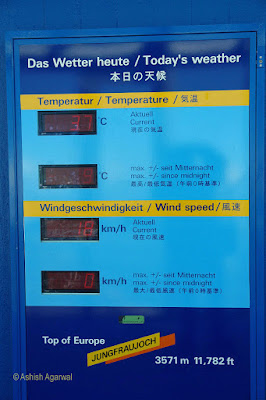 Weather display at the observation tower in Jungfrau 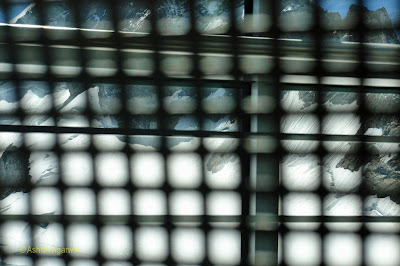 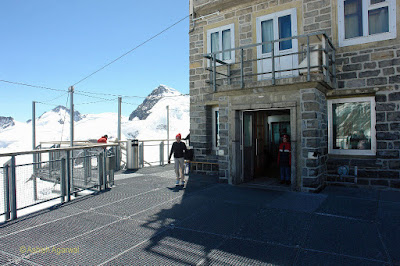 Observatory and metal platform at the observation tower at Jungfrau

There are more things you can do at Jungfrau such as the glacier talk, and even a dogsled pulled by huskies, but it was over for us now. Time to head down after having spent many a hours at the location (was a great memory, and the photographs will refresh these memories). We headed back down, although it took time since the train back had a long queue and was a long wait.

More photos of Jungfrau (and the trip) at this location (you can view a slideshow through the option in the menu at the left).