It was the second morning in Pachmarhi. We had thought of getting up to meet the sunrise, but soon shelved that plan (or rather, when a person does not set an alarm to get up in time to see the sunrise, you can expect that the intention to get up early to meet the sunrise was not actually so). Breakfast was good, a buffet style breakfast with a mix of milk, cereal, and South Indian food. Soon, we were all fired up and ready to go. Little did we know that soon we would use up all the energy from the breakfast that we had carried with us.
The second day was more hectic, since we had planned to go to 4 destinations – 2 before lunch, and 2 after lunch. The first destination of the day was a place called Jata Shankar. Jata Shankar is a cave temple dedicated to Lord Shiva, with the concept being that when he was trying to escape from the demon Bhasmasura (Bhasmasura had done hard prayer to Lord Shiva and the Lord gave his boon; whosoever head Bhasmasura put his hand on, would die instantly. Bhasmasura wanted to test this on Lord Shiva, and so Lord Shiva had to run and get away from Bhasmasura). Jata Shankar was a cave where he lost all his hair while on this run. When you reach the location, there is a small walk to stairs heading down, and then you have a dark entrance to a cave where there is a shrine dedicated to Lord Shiva. There are a number of Trishuls in that place, as well as a stream with water emerging from a hidden place. Nice place, and we spent some time over there. 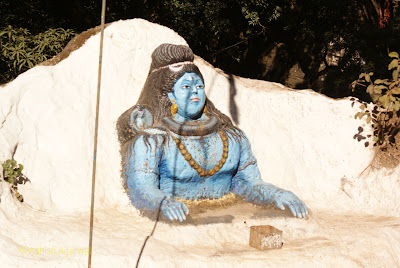 Portrait of Lord Shiva on a rock at Jata Shankar 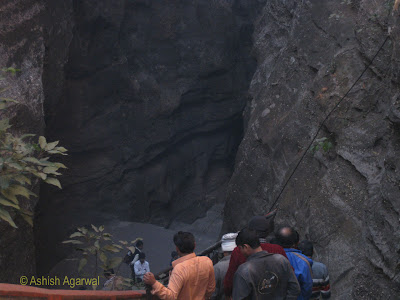 Climbing down the ladder at Jata Shankar 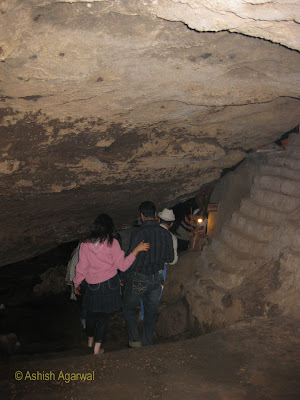 The next place was a major exercise spot. We headed over to Bees Falls, which is a spur off the main road (you need to take a permit since the area is under the control of the forest reserve or the army). You reach a spot where there is parking, and many vehicles stop there. Our vehicle went further down on a long dusty winding road until we reached a stop which was just a short distance away from running water. There is a very small fall of water over a brick ledge, and then you have a path with semi-constructed steps and jungle track that heads down. While on the way down, we were wondering as to how we would make it the way back up since it seemed a fair distance. 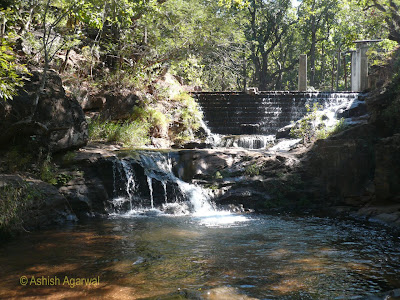 Top part of water before it falls to Bees Falls 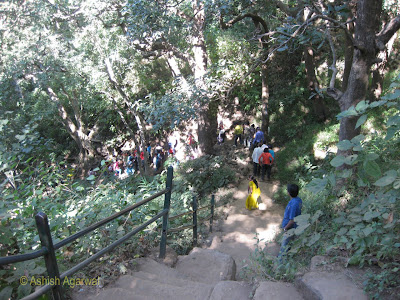 Heading down the path that leads to Bees Falls 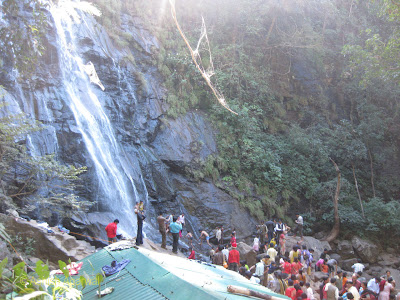 At the bottom, there is the standard waterfall over a rocky ledge, with small shops at the side renting out costumes for the waterfall, and then people running into the waterfall and climbing on a ledge inside the waterfall. We did not do this (this was December after all), and stayed there for some time. After around 30 minutes, we decided to start up the climb. Man, it was tiring soon into the climb, and we stopped atleast 5 times into the walk (I stopped to take photos many times – getting a small rest every time). By the time we reached the top, I was totally out of breath, and had to take rest for some time.
After this tiring exercise, we decided to head back to the resort for lunch – and the buffet lunch that was part of our package (we had a total package of Rs. 43,000 for 6 people – 3 rooms for 3 N / 4 D, all meals, taxi from Bhopal and back to Bhopal, local sightseeing in Pachmarhi). The food that we were served was always great, giving the feel of home cooked food. If you compare service levels with a star hotel, then service levels were not high, but it was a decent enough place to stay (and no, Misty Meadows is not paying me to say all this :-) ).
Post lunch, the immediate place we had to go to was called Reechgarh, and this was a small collection of rocky cliffs and cave like formations between them. Apparently, the caves were sites where animals used to stay earlier, but now abandoned. This was a small walk up a hillock, and then you need to move between the various rocky areas (basically after climbing the hillock, you had to climb down into a small area bounded by huge rocks). There were places where the rocks would almost touch, and a central huge area bounded by these huge rocks hillock like structure. We spent a fair amount of time over there, and also took a number of photos of this location. 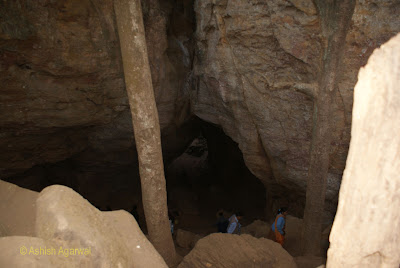 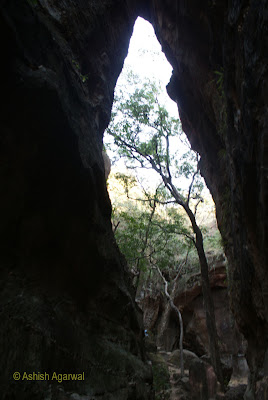 The last place was Dhoopgarh. This is a climb up steep roads to reach the highest point of Pachmarhi, a place where you get some excellent views of sunrise and sunset. There were also some huge rocky sides of the mountain that got lit up by the evening sun. We would not get up in time to see sunrise, so we decided to see the sunset. Because of the height, there was an excellent view of the surrounding areas, and a large number of people had turned up for the same sight-seeing. As sunset grew nearer, more cameras started emerging and more photos started getting taken. There were steps built right at the viewing area, and there was a huge crowd waiting to see the sunset. And the sunset did not disappoint, with some beautiful colors. 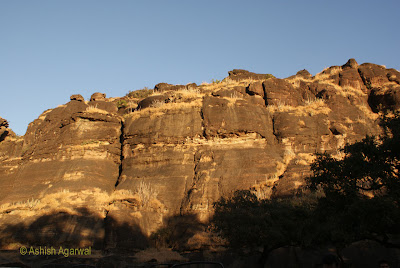 Rocky hillock at Dhoopgarh getting highlighted by sunset 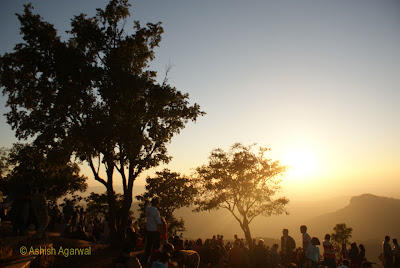 People gathered to watch the sunset at Dhoopgarh 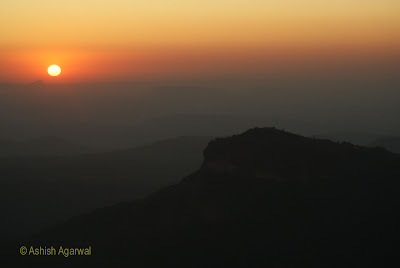 Sunset in the distance at Dhoopgarh

Our trips for the day done, and fairly tired, we headed back to our resort, and had some nice dinner around a bonefire.

More photos of the trip at http://ashisha.com/gallery/main.php?g2_itemId=11389

Well, those who haven’t visited any of these similar towers – the experience of looking at the surroundings from the top will be fascinating. Apart from some videos about the company that built this (PETRONAS – Petroliam Nasional Berhad, a Malaysian oil and gas company) and information on interesting facts about the towers, you are entitled to visit the Skybridge and Observation deck.