History, arts and science are seen as three separate areas, that apparently have little in common. But it was not always like that. In past, all three were closely linked. This was brought out during a guided tour in Bologna (Italy) about birth of geology as a scientific discipline and its links with art and history.

I was not very sure about participating when I had seen the announcement from the medieval museum about the guided tour to the San Giacomo church focusing on geological issues. A little search on the internet had shown that the guides for the tour were two important persons – Giambattista Vai, professor of geology at Bologna university, and Alessandro Ceregato, a marine research scientist. Usually such tours are conducted by archeologists, historians and art critics. So I was intrigued by the idea and decided to try it.

Most of the explnations were by Prof. Vai, while Alessandro Ceregato spoke mainly about a painting by Passerotti.

Initially, when I had heard about guided tour to churches, I was not very keen to join them, as I used to think that these would be “religious” visits. However, after a few good experiences, soon I had to change my mind.

Church has played an important role in history of Europe. Often, it was not only a religious power but it also ruled and controlled whole countries. Church also patronized most of the arts, artists and sciences. Thus, looking at the churches as part of the history of Europe, helps in gaining new understandings about history, arts and different branches of science.

San Giacomo church is a huge structure in the university area of Bologna (in the image below, seen covered with snow in the evening light in top right quadrant, picture taken from the top of a medieval tower in the city centre). 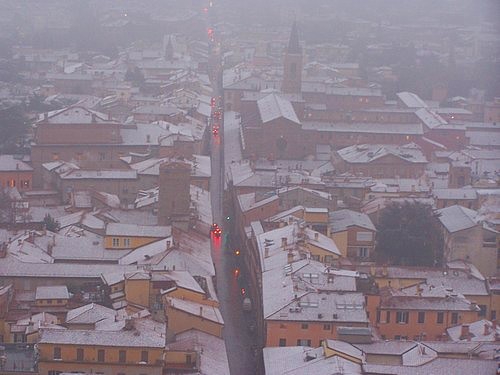 Prof. Vai started the visit by explaining that he was going to talk about events around the year 1500 AD. This was the period of early renaissance and Italy had a large number of great artists who were making a new way of making art at that time. The artists included Michaelangelo, Leonardo da Vinci, Raffaello, Brunelleschi and many others. Their new way of looking at paintings, was the introduction of ideas of geometery and mathematics in the art through the concept of “prospect“. (In the image below, Prof. Vai). 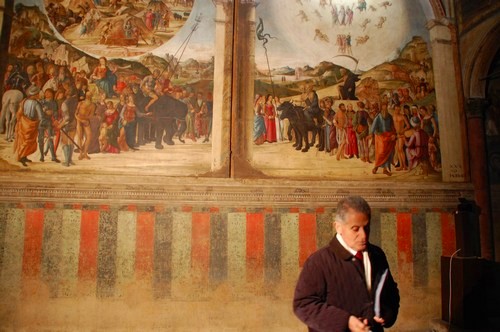 Till then, art had mainly been flat and two dimensional. Paintings had showed people and events, but they didn’t have depth and proportions, they were very clearly paintings, different from the reality. The new ideas of “prospect” in the art, looked at things like the source and angle of light in the paintings. It analysed shadows and looked at hidden geometric forms in nature. It also looked at proportions and distances, and introduced the idea of depth in the paintings.

Thus suddenly artists were looking at geography, biological life, inanimate objects, everything around them, to understand their specific characteristics so that these could be represented in their three-dimensional reality in their paintings. This changed the way paintings were made and at the same time, gave birth to the science of geology. Geology deals with understanding how earth is composed of different materials and layers and their characteristics.

Geology also had other practical implications including search for new metals and minerals useful for treating illnesses. It also had links with more esoteric ideas and alchemy.

In Italy, people had found fossils of marine life and objects like the sea shells, while digging in the hills and mountains. They couldn’t understand how these things had come to these places, so far away from the sea or rivers. The most accepted theory to explain such finds was of the universal floods during Noah’s times as described in Bible. Leonardo da Vinci was the first person to leave written documents of his opinions on this subject.

Leonardo’s argument was that shells and fossils of marine animals could not have come to the mountains with the floods described in Bible, as floods would have left such objects on the surface of the hills and mountains and wouldn’t have buried them inside the rocks and hills. Thus, his hypothesis was that in the past, those same mountains were at bottom of the oceans.

Unfortunately, Leonardo preferred writing in “reverse handwriting” and thus his diaries were not properly read and understood till more than 200 hundred years later. Thus his theories remained forgotten. On the other hand, other artists, humanists and budding scientists in renaissance period of Italy had continued to think and discuss about it and thus geology came up as a branch of science during the 1500s in Bologna. One such person from Bologna, Ulisse Aldrovandi, is called father of geology because he coined the word “geology” in 1603.

After all the explanations, we were taken around San Giacomo church to look at the paintings from fifteenth to sevententh century to see how artists had incorporated those early ideas of geology in their work.

We looked at a painting by Bartolomeo Passerotti. At the bottom of this painting, we looked at two objects – a sparrow on the left and a shark tooth on the right corners (below Passerotti’s painting). 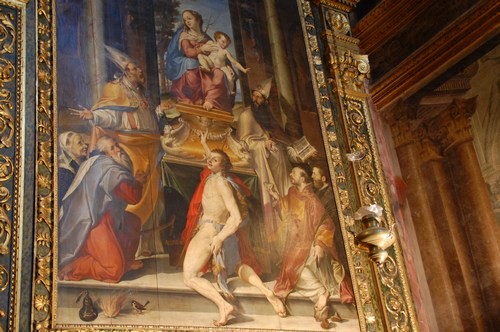 The sparrow is considered as the signature of Passerotti (literally “Passerotto” means “sparrow”). The special thing about this sparrow is that it has been painted in such a detailed and realistic way that it’s species can be identified. It is a local species of sparrow that was very common in this part of Italy 3-4 hundred years ago, while today it has been replaced by the more common hybrid or European sparrow. This again showed the attention to details in the paintings introduced at that time.

The shark tooth near the footstone and a pebble on the bottom right of the painting, discovered in a hill (details in the image below), is from the Aldrovandi collection. The painter Passerotti was a friend of Aldrovandi, and by placing that tooth in the painting, he acknowledges his friend’s work and theories of geology. 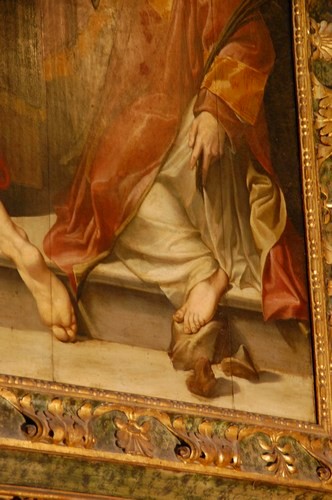 Then we went to look at the Bentivoglio chapel, a small chapel in a corner of San Giacomo Maggiore church, that is full of beautiful paintings. The Bentivoglio family, descendents of a Spanish king, ruled Bologna for more than 100 years in the fifteenth century. This was their own private chapel in the church.

On the right wall, the chapel has a beautiful Bentivoglio family portrait of Giovanni the second, with his wife Ginevra and their eleven children, standing around Madonna. There is also a Bentivoglio statue that I liked very much. 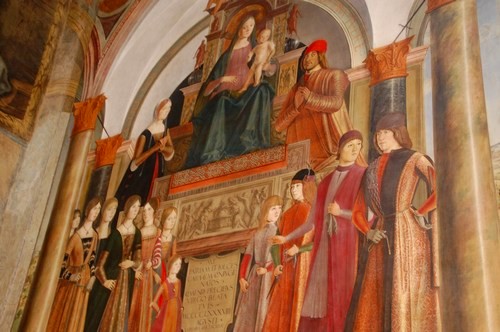 In the centre of the chapel is a beautiful alterpiece done by Francesco Raibolini (also known as “Francia”). 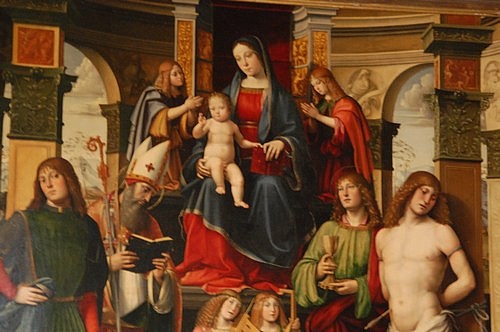 On the left wall of the chapel are two paintings by Lorenzo Costa, on the themes of death and fame. Prof. Vai pointed out the different kinds of rocks, hills and mountains shown in these two paintings, explaining how the knowledge of geology was affecting the way such objects were painted, so that they are no longer generic objects, but are specific rocks and hills, painted in such a precise way that they can be identified even now. 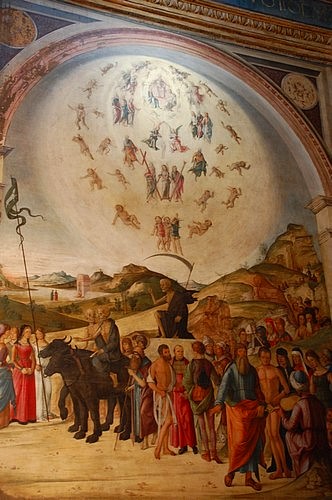 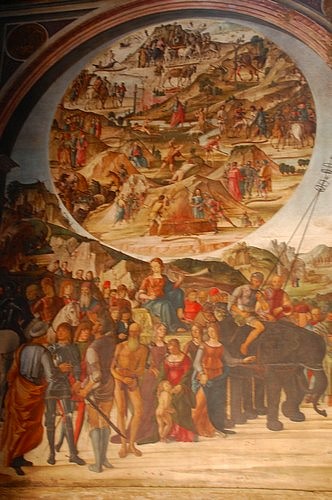 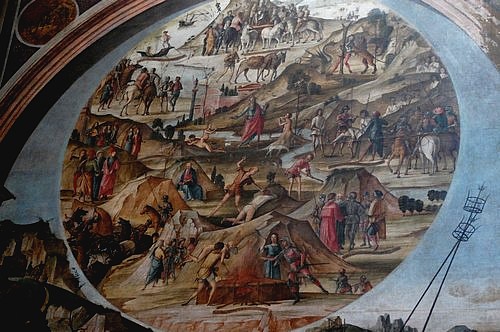 For example, in one detail of the painting, it is easy to identify the hills surrounding Bologna, including that hill where later the well known San Luca church will be built. 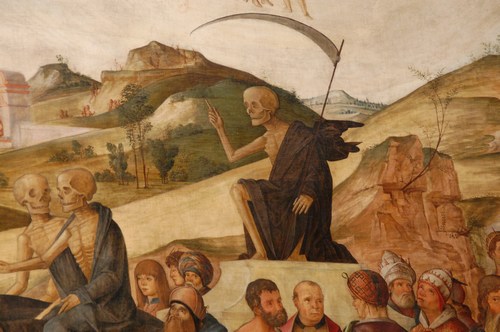 Lorenzo Costa’s two paintings in the Bentivoglio church have so many other details about life in those times, that deserve another separate post, so I won’t talk about that here.

The two hours of the guided tour passed very quickly. Prof. Vai reminded us to visit the Capellini museum close by, one of the biggest collections of paleontological and geological objects in Italy. The visit was very interesting, and its added bonus was that I finally had the opportunity to enter and see the famous Bentivoglio chapel from inside. Normally, this chapel is closed to public and can only be admired from the outside.

Once again this visit reminded me to not to look at the paintings only for their beauty, but to also look at them more carefully as historical documents that can teach us about the past. And if you are coming to visit Bologna, remember to visit San Giacomo church near the city centre.

Your troubles don’t end once you get the entrance tickets. Because the tickets to the actual boat ride will be issued only at the counters near the lake boating area which is another 2 kms away. From the gates of the sanctuary we left our car and took an auto to reach the boat house(auto drivers queue up at 3 am to book their place at the head of the queue). For the 2 kms, autos charge(robbed would be the right term)200 bucks to the inner gate of the sanctuary. From there, it is a sprint for another 500 metres to the ticket counter. After all these troubles, I just about managed to get the tickets just in the nick of time. I heard from the authorities that to avoid these troubles one can stay at the KTDC Aranya Nivas, inside the sanctuary which provides access to the boat rides.