It was a dream come true when I was invited to join a team of photographers covering the MTB Himachal 2010. The Mountain-biking event was sponsored by Hercules and gave me an opportunity to meet with other photographers and also get to know what drives the cyclists who participate in such potentially risky events.

It was a 8-day long event, which would take us through some of the most picturesque parts of Himachal. The route to be taken would be: 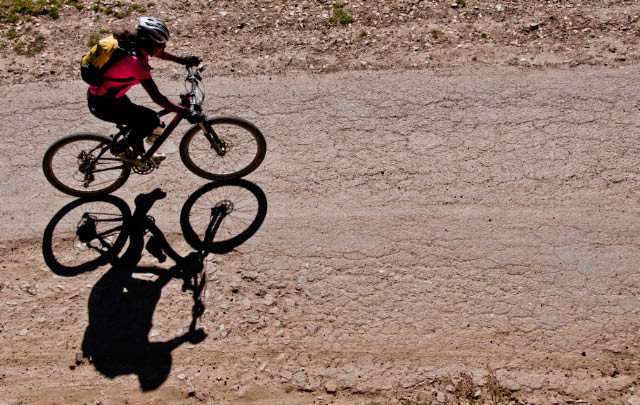 The total distance to be travelled in these 8 days was somewhere around 470 kms with the riders covering as much as 85 kms on Day 4.

The event started from Ritz, Shimla of 23rd October. Riders from various parts of the world were waiting for a flag off. The event was being attended by the MLA of Shimla, Mr. Suresh Bhardwaj and Ms. Madhu Sood, who is the Mayor. They were also the Chief Guests of the inauguration ceremony. The riders were raring to go already and the excitement was everywhere. 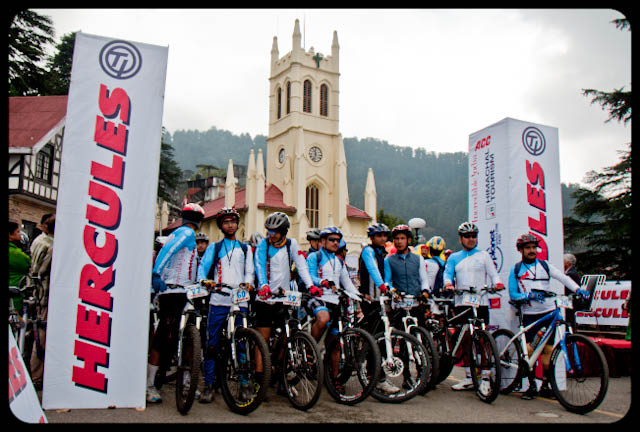 This was also the day of free-ride which meant that the riders could take as long as they liked to reach the destination and the time would not be monitored. The goal was to reach the village of Shainj through Mashobara where we would settle for the night’s rest. The day became tougher than anyone had expected because of heavy rains and their impact on the not-so-good roads. But spirits were high and adventure was in the air. So everyone reached the destination safely only to discover that the place we had to put our tents for the night rest was flooded. Luckily, we got shelter in the local school. 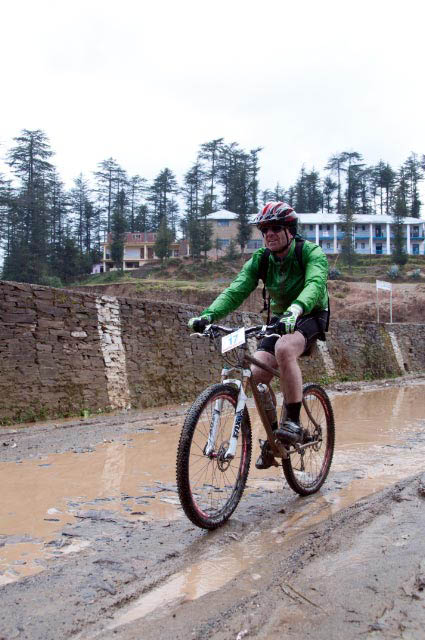 The second day was divided into three stretches – the first was the riding stretch from Shainj to Chhaila, the second stretch was a hike and bike session for 12 kilometres and the last stretch was a the biking session to Tanni Jubber Lake. In between, the riders had to cross a river as well. 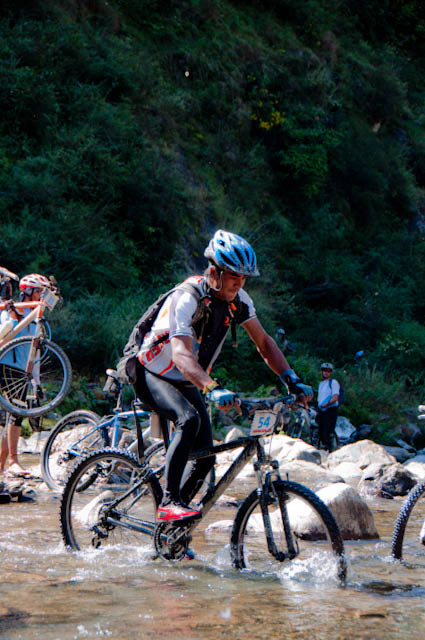 The first stretch was comparatively pleasant because the rains had ceased and also because the upcoming hiking and biking session was bound to be very tough. After all, some bikes weighed 21 kgs and these riders had to carry their bikes on their shoulders when it was not possible to ride them – which was almost all of the 12 kilometres. By the end of this stretch, we, the photographers, were dead tired. But the riders were much better off than us. 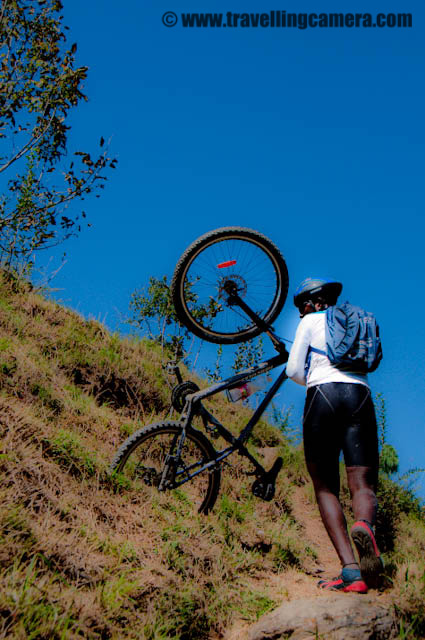 Once we reached the campsite, we were relieved to find comfortable tents as the weather was chilly and we were all exhausted. The third day was the most risky of all days mainly because of high speed riding, the steep slope and the heavy traffic. However, all of the bikers were experts in handling such type of a terrain and I think I was the only one who was scared. Sometimes the incline seemed to be up to 75 degrees and the roads were spectacularly bad. 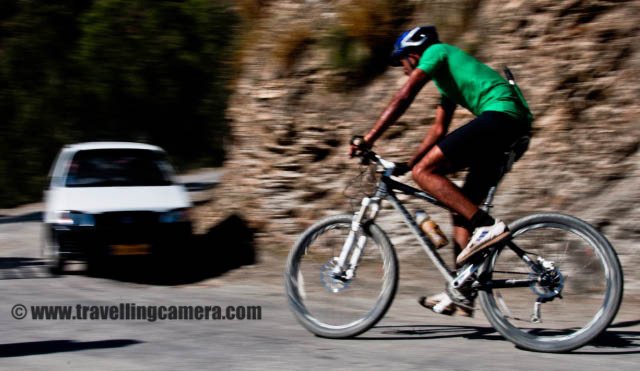 With each passing day, we were reaching higher altitudes and the landscape around us was becoming more and more breathtaking. But unfortunately we could not spend too much time clicking pictures as the schedule was very tight and we could not afford to slow everyone down. 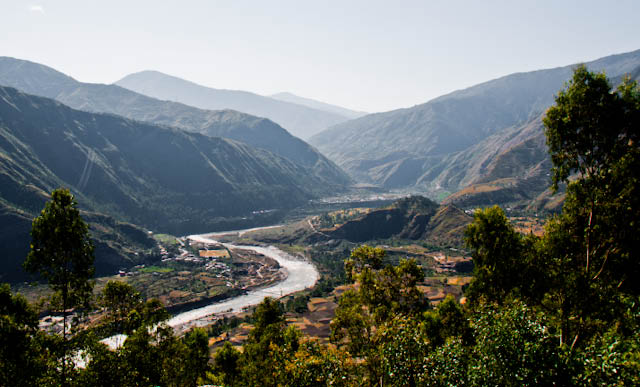 Most of the third day was spent riding with river Satluj flowing deep on one side. Even though the ride was scenic, the sight of the camps was as always a huge relief. The fourth day was meant for rest. But we could not stay inside the camp. Simply because we were surrounded by so many beautiful sights that we were compelled to get up and explore. We decided to climb to the top of one of the snow-covered hills that surrounded us. The way was dotted with waterfalls big and small. 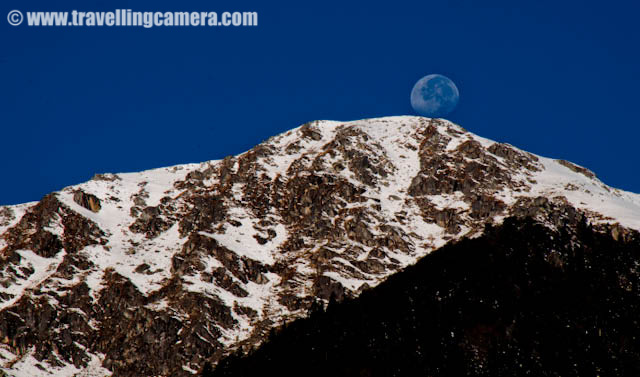 We also came across loads and loads of charas crops (locally known as Bhang) and Chalai crops that are used to keep the houses warm. I had to abandon the quest to reach the top because I was far too tired but some people did manage to reach the top. 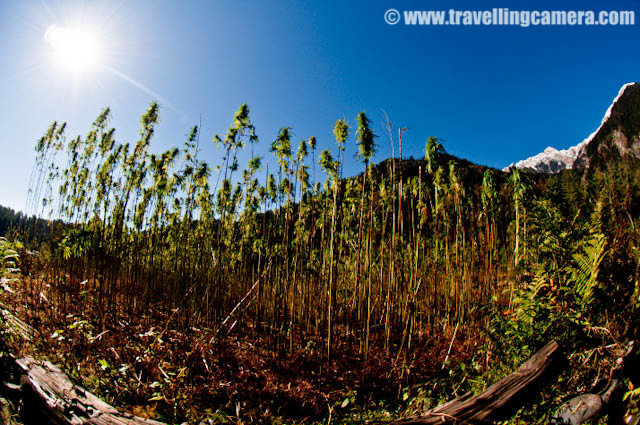 I took the opportunity to explore the surrounding villages and saw some very exciting looking open-air schools. It was nice to see children studying in the sun and I could only imagine how exciting it would be. The Sarahan village is abundant on resources and a lot depends on solar power. 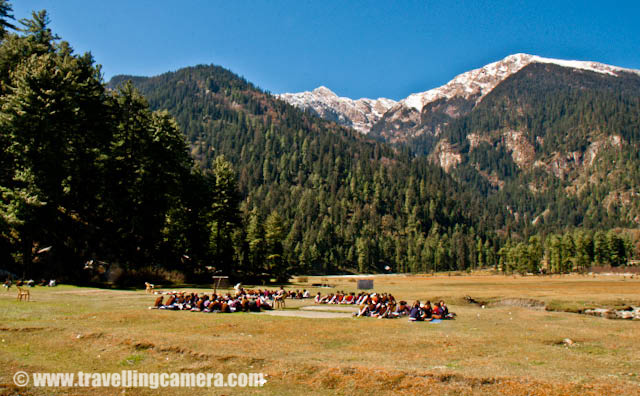 There were four more days to come after this and there were a lot more adventures anticipated. Find out about it in Part II of this story which will be ready in a few days. If you want to find out more about this trip, you can click the link below to see all of my posts about this trip:
All Posts About this Event
You will find a lot many pictures here.

Magaluf holidays are famous for sunshine and disco lights. The young at heart and beach-lovers of all ages will enjoy this resort. There are also water-sports for the more active.

MTB Himachal 2010 – A Photographic Adventure with my Travelling Camera – Part I was last modified: April 14th, 2020 by VJ Sharma

A software engineer by profession and a photographer by instinct, I have been trying my hands on photography for more than three years. I have always been a ghumakkar and having photography as a hobby just gives me more reasons to travel.

Today is a day to be marked, in bold, for I have just got lucky! An opportunity to interview the cause for my existence…