In the first part of the story you have read about my arrival of Madrid and visit to some beautiful places.

Well then after this tiring night adventure, we came back to hotel and slept. There was no official program left and I slept deep, not caring to wake up  early the next day.

Next day at around 9 I woke up took my breakfast and with another friend inquired about the city bus tours.   We were a little sad to know that due to a marathon going on most of the roads in city center were closed and the city tour bus will start around 2 in the afternoon. We thought of going and exploring the city on foot, took a map from the hotel and started from the Central Garden which was just near our hotel.

The Garden is in the heart of Madrid and is known as Jeronimos. The garden is spread in several acres and has beautifully laid paths. 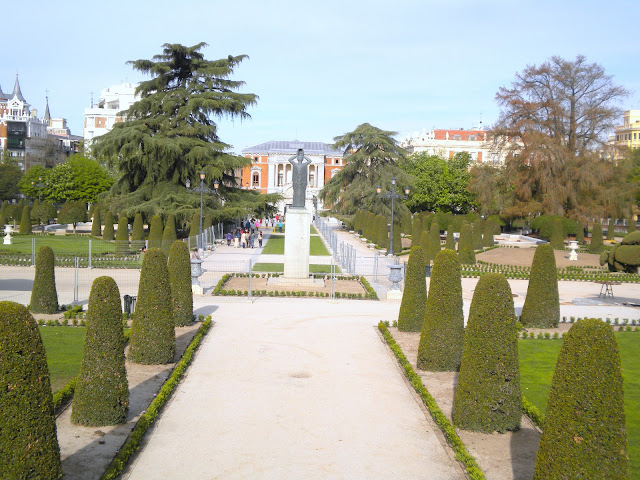 Entrace to the central Garden

We also saw some trees which were trimmed so strangely that they looked like green mushrooms. 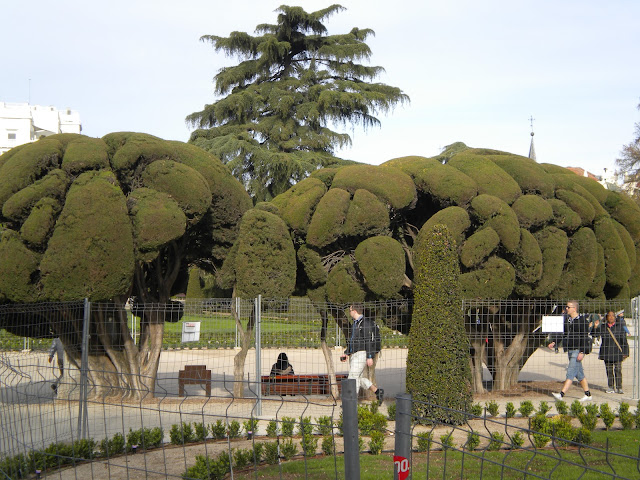 This garden is a heaven for joggers and there are several joggers’ routes indicating their map, total length and approximate time taken to jog. One can not believe such empty big space lies in the heart of a costly, populated and crowded city 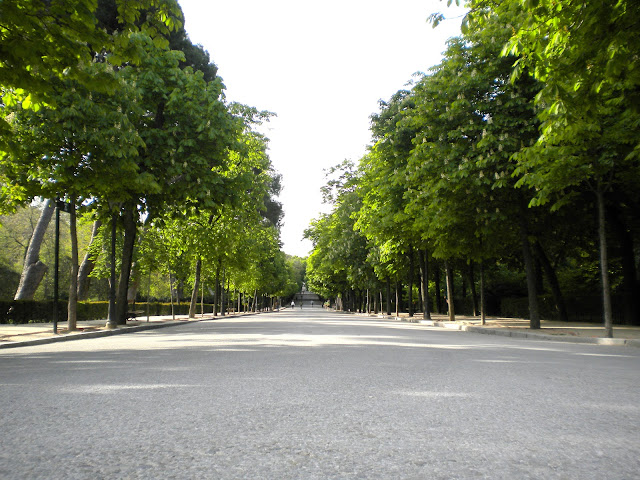 Loooong walkway in the garden

In the center of the garden there was a beautiful lake with some historical monuments nearby. The lake was full of people enjoying the peddle boats. 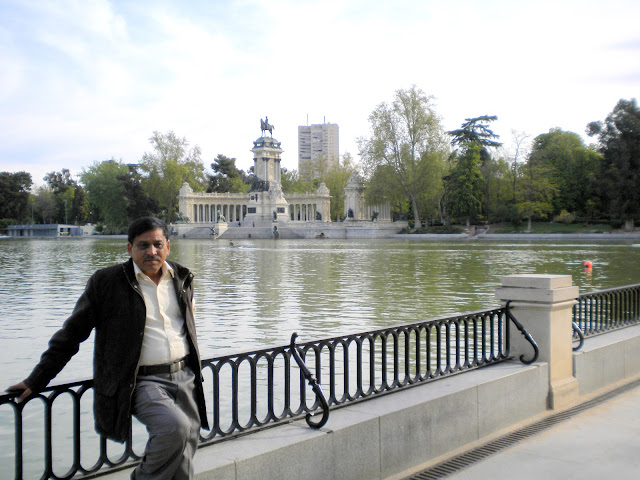 Lake in the garden 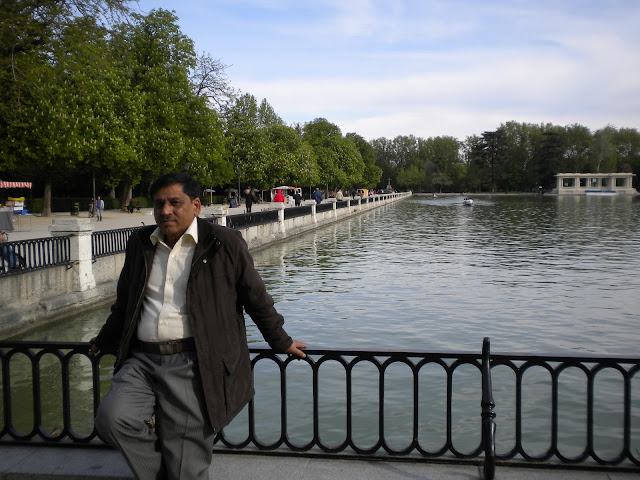 Another view of the lake 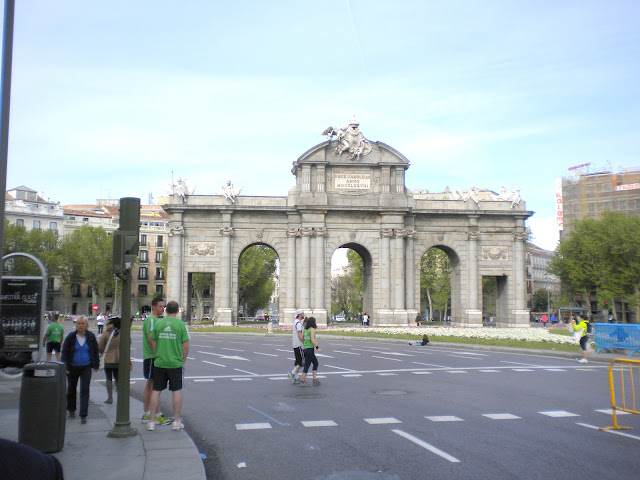 The roads were all empty because, no traffic was allowed then due to the Marathon….. hence we enjoyed taking photos from different angles, even standing in the middle of the road.

From Madrid Gate we walked towards sol… another tourist spot with lot of galleries, malls and restaurants…but due to Marathon most of them were closed, so we enjoyed watching the marathon, and encouraged the youngs and the olds. We saw a couple of around 90 years jogging slowly and all the crowd clapped seeing their courage. 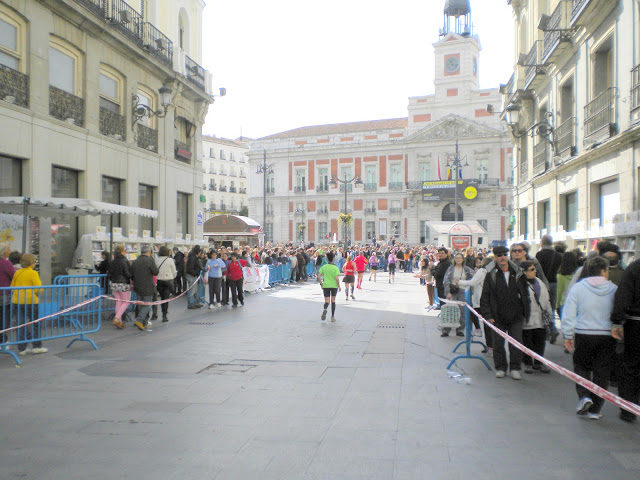 Marathon in the Sol

Nearby was the place called Cibele, Roman goddess of Nature. This square had a beautiful building, carved in white stone. The building was earlier made for communication center but now it is used as Town hall and Mayor’s office. On the square is the fountain which has this statue of Cibele whose chariot is being driven by 2 lions. 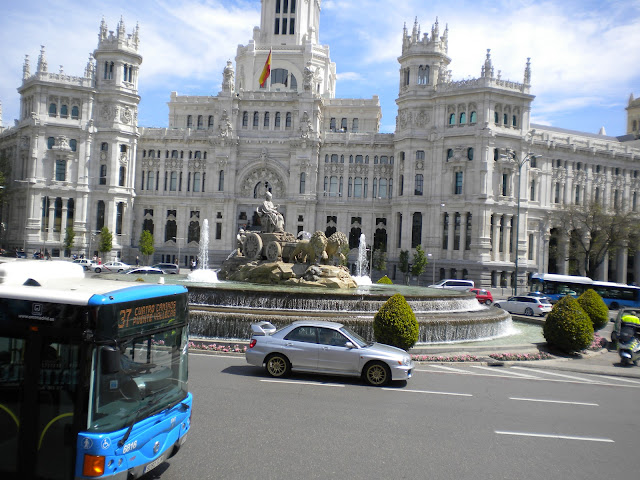 Another view of the Cibele, the Goddess of Nature with Town Hall in the background. 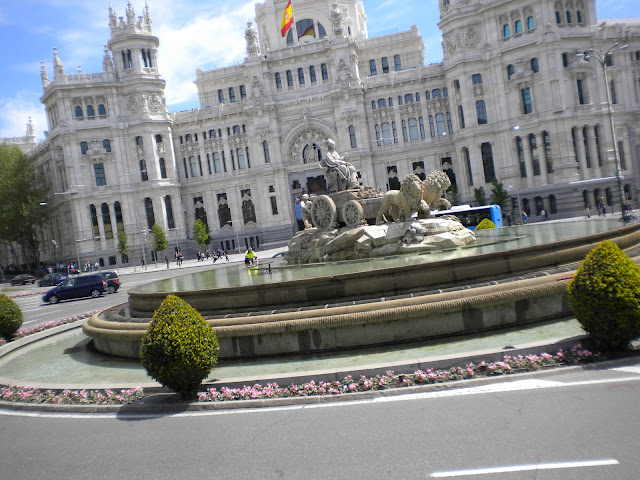 Cibele the goddess of Nature 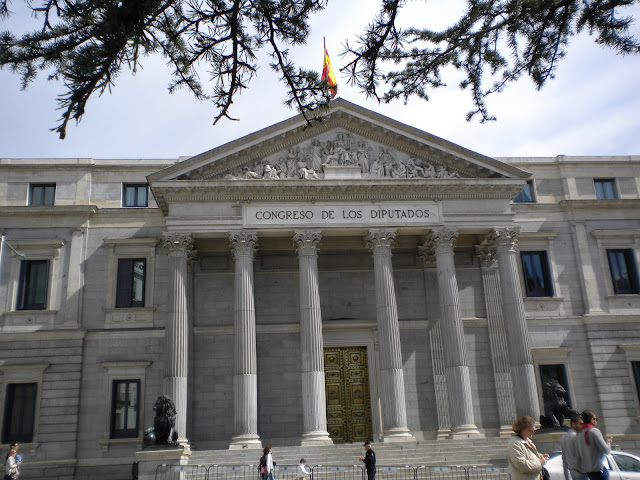 We had taken a long circle of about 4-5 Kms and were tired. My friend had to leave so we started back towards hotel. In the way I saw a small statue lying on the footpath. I was surprised as to how they kept a statue on the path… I stood near the statue and got myself photographed and then saw that there was a small box lying before the statue which had some coins in it. 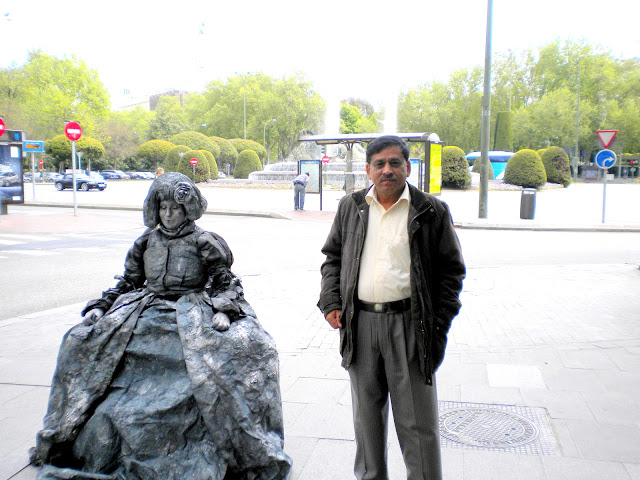 a woman artist posing as statue

Then i bent downwards to see the coins in the box, the statue suddenly opened eyes and saw !!! LOL it was a woman who was sitting like a statue after make up.. it was really hilarious and we appreciated her art, shook hands with her and put some coins into her box and moved forward.

My colleague then started his journey to airport, leaving me all alone. I just wandered here and there and saw a Janpath type shanty market nearby and purchased some scarfs. The girl selling the scarfs was so friendly, warm and cooperative that I ended up purchasing 6 scrafs instead of one …LOL. This friendly trend is rare among people of UK, France and Germany where even if they are friendly they give you a latent feeling of being white and we being inferior.

The same friendly Spanish Kanya told me that the city bus tours are going to start soon, so I purchased a day ticket and sat in the bus which was showing the old Madrid. There are two tours one takes you to a circle of New Madrid and the other one in Old Madrid. New Madrid we had seen on foot, so it was turn of Old Madrid, which was awesome, with some great buildings, cleanliness and open. Here are some photos of old Madrid which I shot from the city tour bus. 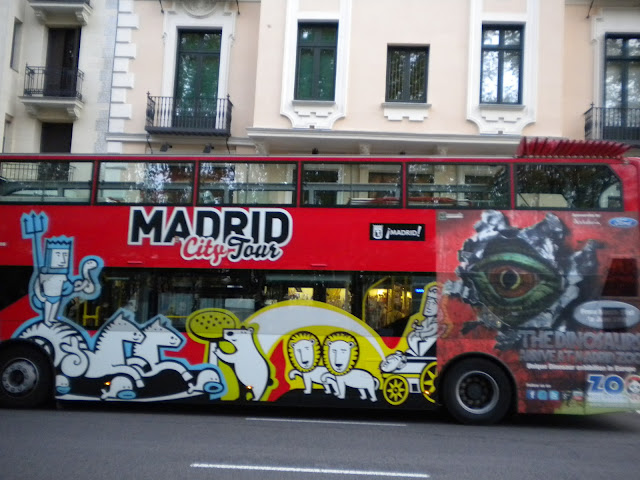 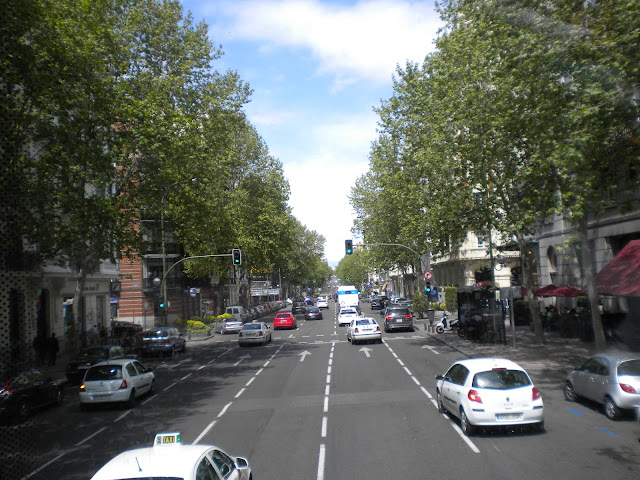 When I boarded the city tour bus, I saw one Indian family sitting there. Husband, wife and 2 little daughters. I smiled at them to greet, but seeing me, their faces deformed as if suffering from some facial piles and they started looking towards other side. 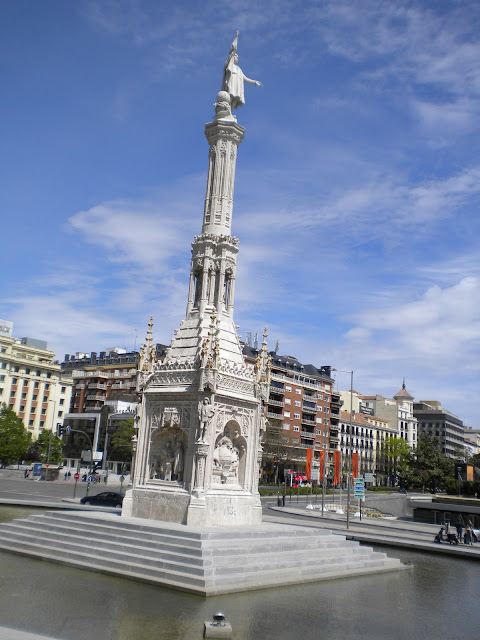 A monument on the cross-roads 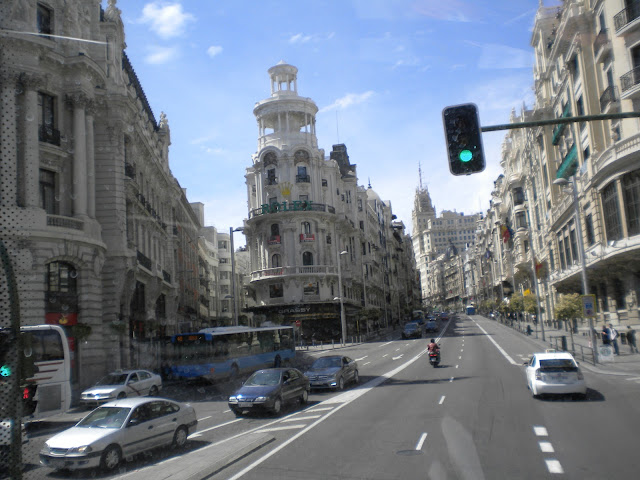 A busy street of Madrid

When We used to live in Edinburgh, there was an  Indian  in our building and whenever he would come face to face with us, he would look through us, as if we do not exist. Whereas the Scottish would always greet us and held the door open if my wife was coming. I dont know why we behave like this… if anyone knows the answer please let me know. 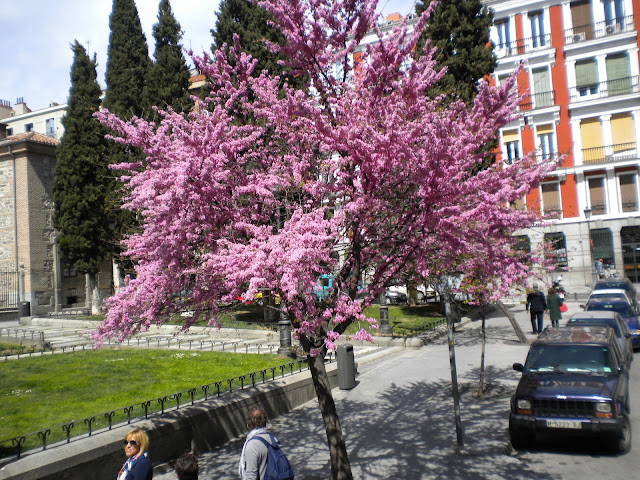 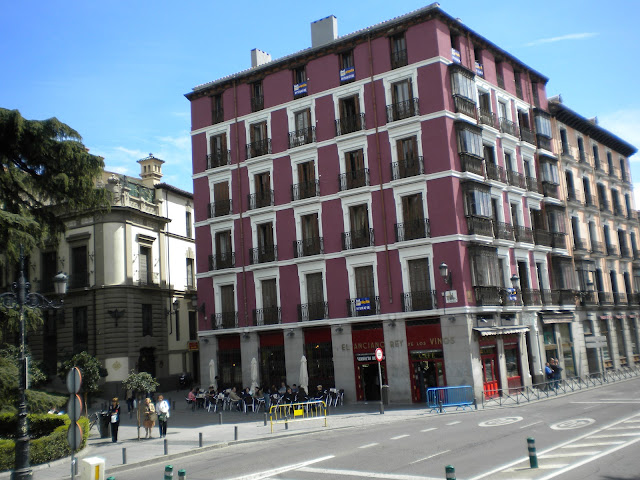 A beuatiful building in Old Madrid 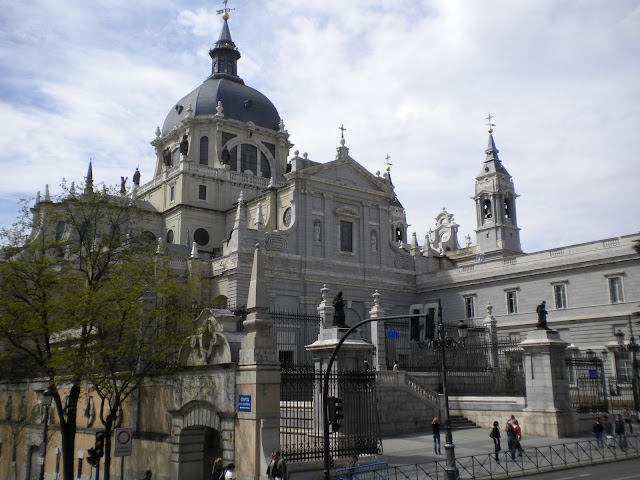 A part of Royal Palace

The tour was coming to an end… the bus reached back its starting point and I alighted from the bus.  The tour of Madrid was quite wonderful and energising… now it was time to leave Madrid

Some rates for reference :

Food : there are about 15 indian restaurants in down-town.  Normal meal per person may be around euro 10-20

the city is not very costly as per European standards… people are friendly and normally it is safe for tourists .. at least better than Paris and Germany

The international Boarder between India and Bhutan is shared by Jaigaon in India and Phuntsholing in Bhutan.

There is free access between these two places, however you are required to get permit to move beyond Phuntsholing. After an hour of journey, the view besides the road began to change and after crossing large fields, tea estates appeared. Total journey was about five hours and before we realized we reached Bhutan. It was a big gate, painted with colorful dragons and guarded by soldiers from Indian BSF and Royal Bhutan Army.