After settling down in Beiurt, one day  I made program to visit Baalbeck, one of the most wonderful ruins in the world.  Some  other families agreed to join us and we hired a bus to go to Baalbeck.

Baalbek, ancient temple complex is around 90 Kms from Beirut, Lebanon. These ruins are considered by many, to be the most enigmatic and holiest of holy places that existed during the ancient times. The Romans conquered the site much later; and the Phoenicians constructed this grand temple dedicated to Baal at a later stage. But before all this there already was what could be dubbed as the ‘largest ever stone block construction’ of the world. 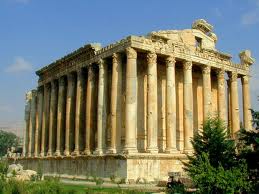 During the Roman periods, this area began to be known as ‘Heliopolis’, which means ‘City of the Sun’. The central deity of this shrine then became the sun god Jupiter. Earlier Roman texts would have placed importance on Zeus as being the whole and soul of the Greek pantheon; but Jupiter was (arguably) given the pedestal later. Jupiter replaced, at Baalbek, the ancient Phoenician God Baal. 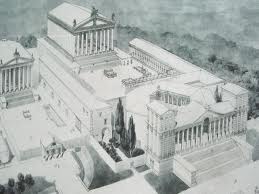 A historian's sketch of original temple complex of Baalbek

Mainstream archaeological community has a number of theories that it states with relation to this ancient Lebanon site. The history of this site is said to date back to approximately 5000 years. A number of excavations that have been carried out have uncovered what might be traces of settlements from the Middle Bronze Age. These further seem to have been built atop human settlements dating back to the Early Bronze Age. 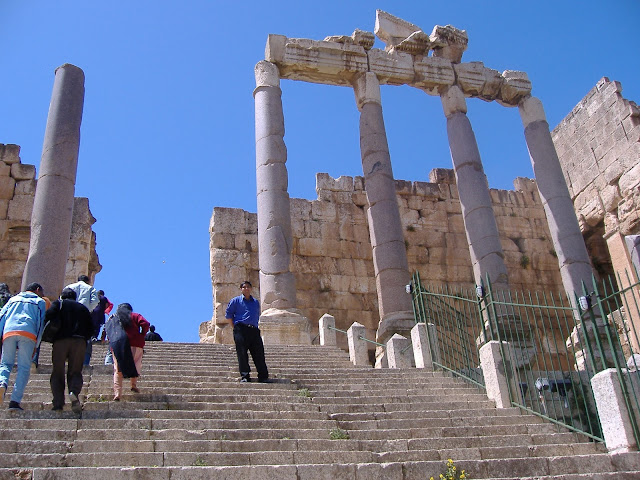 Some scholars also claim that this site may have found mention in Biblical passages as well. In I Kings IX: 17 – 19, it says that King Solomon built Gezer and Beth-Horon, and Baalath and Tadmor. All of these were in the wilderness. According to some scholars, Baalath could be equated to the ancient Baal temple that stood here in Lebanon.

Then there were ruins of God of Fire, Moon and Mars.  Underneath these temples were dungeons where animals and humans were kept for sacrificing to the gods.  Humans were mainly those who were conquered during war and were treated as slaves. 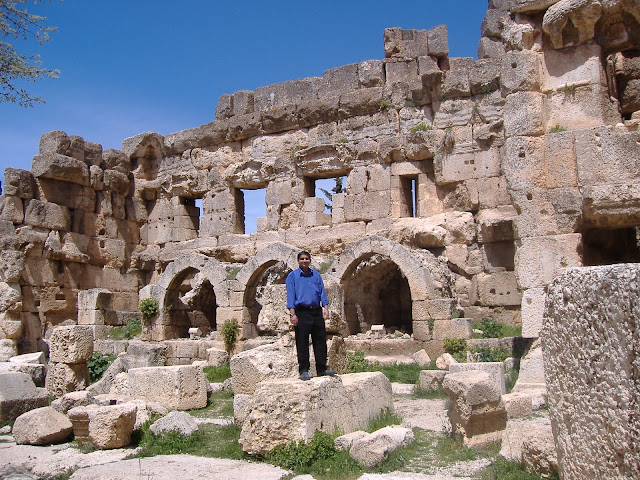 A part of the grand courtyard 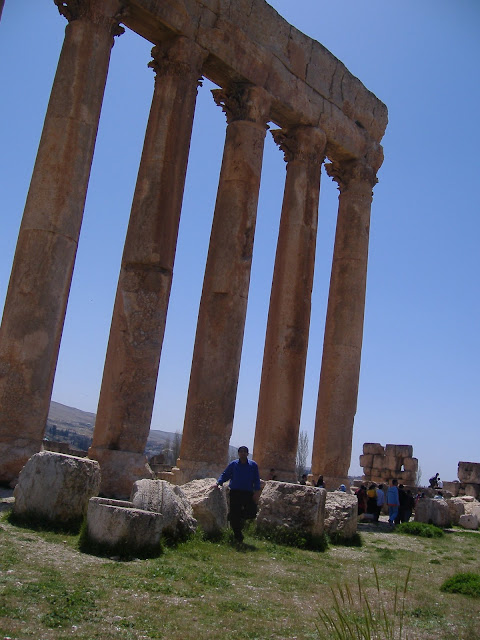 Ruins of temple of Jupitor

The biggest mystery of the ancient world, perhaps, is that of the massive foundation of stones that lie beneath the Roman temple of Jupiter.  The courtyard of this temple is situated atop a platform, which is dubbed as the ‘Grand Terrace’. This consists of a rather huge outer wall, which is filled with massive stones. 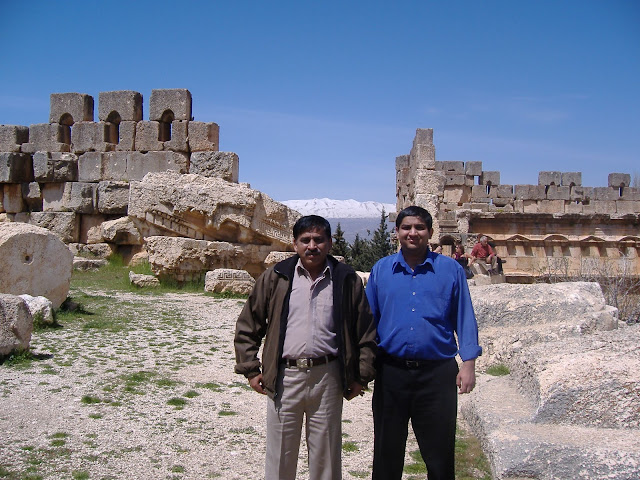 The finely crafted blocks also seem to come across as being precisely positioned, which has for decades now, baffled experts. Each block will be somewhere around 30 odd feet in length and around 14 feet in height. They are known to weigh around 450 tons each.

On the west side lie even larger stones which are called the Trilithon. They are almost 1000 tons in weight, each; and are around 65 x 14 feet in measure. 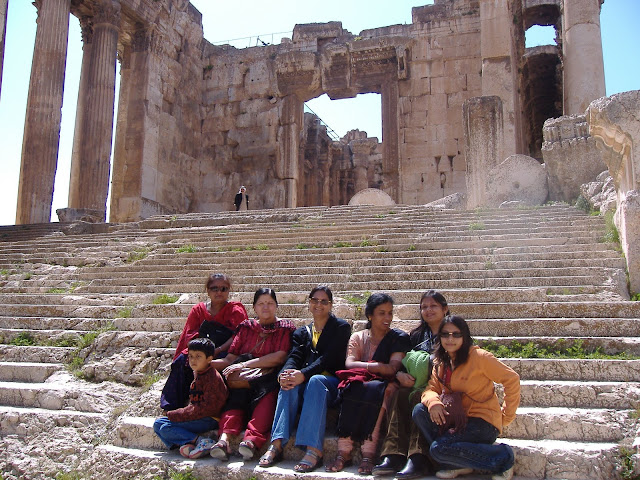 What baffles scholars till today is how the quarrying was and transportation of such massive stone blocks carried out at that time, when it may even not be possible today, in spite of our technological advancement.  Baffling, but true! 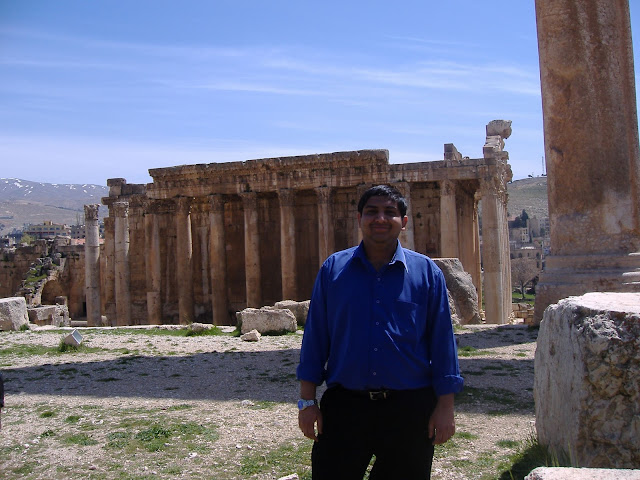 So there was Baal Temple, there was Jupiter, Fire, Moon, Mars and other temples which were there before Romans and before pheonician re-built them ! I was thinking was it some distorted form of Shakta tradition of Sanatan Dharam,  which was followed here, because in Shakta tradition, Fire and other planets were worshipped and sacrifices of animals or even humans were present then. 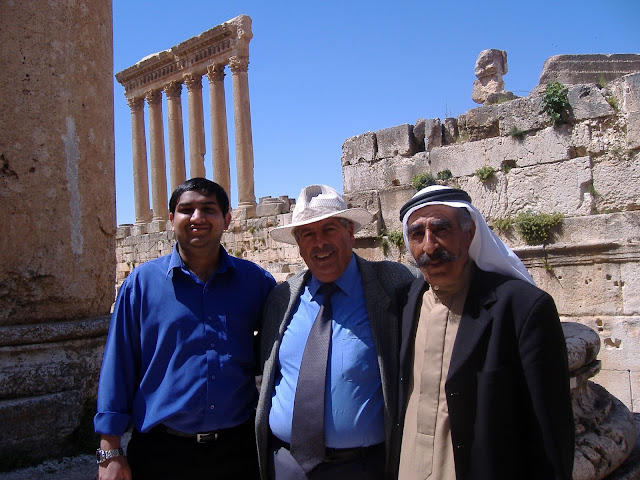 Shan with guide and bus driver

After quenching our thirst with the history of this magnificent place, we started gathering near the bus.  Shan had not come yet and there was some argument near the gate of the bus.  I went down to see and was astonished to see that Shan had purchased an Arabic head gear and was wearing it.  The driver of the bus was not letting him in telling him in Arabic – go away this is private bus not for commuters and my son was telling him in English – that he is not Lebanese but Indian.  Finally when I reached and told the driver that he is my son, the arguments turned into laughter. 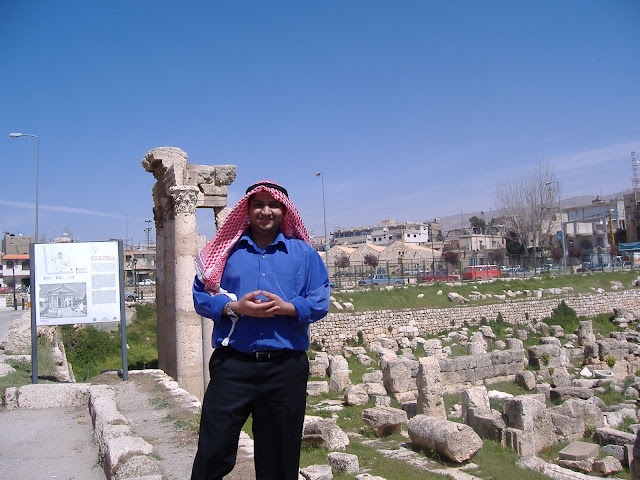 Masha-Allaha we left Baalbeck and went towards the “Blue River”.    This small rivers starts from the glaciers nearby and cuts through lebanon near the Israel border where UNIFIL, the Indian Army personnel are posted under the United Nations flag. We met many Indian army personnel who greeted us with surprise.  We were so happy to see that our Indian soldiers had earned a lot of respect among locals due to their strenuous volunteer efforts to provide medical help, artificial limbs and other social activities among the local village folks. We saluted our soldiers and proceeded towards the Blue River.

During the war of 2006 Israel had captured Lebanon upto this river.   I was not sure why this name Blue River has been given to this river, but on seeing the river all my doubts were cleared.   So clean, and bluish water, I had never seen in my life. 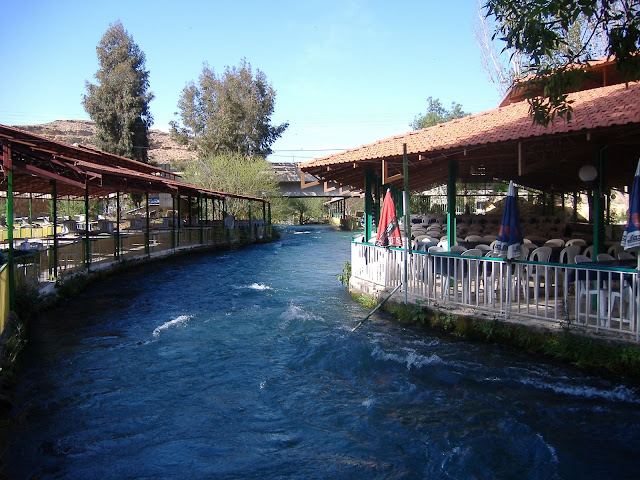 The summer heat had started scorching and some of us lost no time in jumping into the river, full clothes on.. to kill the heat 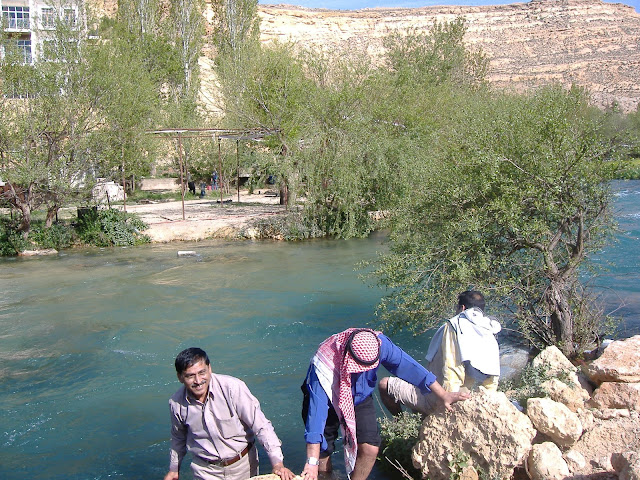 Due to a friend at UNIFIL I was able to visit the border and could see Israeli soldiers and houses on the other side of the fence.  I was escorted there on the condition of not snapping any photo of the place so I dont have any photo of that wonderful sight.

We also visited a small village near Sheba farms.  The village is divided between Syria, Lebanon and Israel.  Those who remained on the Israeli side can not visit their relatives on Syria and Lebanon side, because Israeli nationals are treated as enemies by both the countries.   The richer ones can go to Jordan or Egypt and meet each other.

But for those who are not so rich to afford to go to Jordan or Egypt, they have erected high wooden platform on both the sides.  People from both sides stand on the platform and talk to each other by shouting loudly.  When I was there, a girl on the Israeli side was showing her latest child to her father on Syrian side.  Both were shouting loudly… and the old father on this side was watching the child with binoculars, with tears dropping from his eyes.  O God…what we humans do to this earth and to ourselves.

Voila… after this long hectic day we finally returned to Beirut and we were welcomed by the news that a powerful bomb had exploded in our absence killing many people including two Indians.

Heaven on Fire… this term is right for Lebanon !!!

Next part I will show you around Harissa church,… the christian side of Lebanon.

Apart from travelogues, I hope to get cracking on the next fiction novel as well pretty soon. I have a plot floating around somewhere in my skull and hope to pin it down by brute force sometime soon. And its Ladakh season again! We are planning to ride again to Ladakh and cover places we didn’t see the last time – Pangi valley, Sach pass, Umba La, Panamik and Turtuk, Agham Shyok road, etc etc.