Started with a Bang.. Off from the office and was really bloody late ..Got to catch the train at any cost. I remember it was really a tough and didnt look like a usual one ..Me in my complete excitiment and rush… At office was struggling to get the work done which Some how i managed to complete it.. My friends Sudeep, Mahadevan, Ajith (budda) and Vaidu ….they had already boarded train from Kurla and i was suppose to board it from Kalyan … I reached home as usual late got struck in the traffic at powai.. I reached home by then these guys were nearing kalyan . Anyways, I thought, kalyan was just a 15 mins by Auto-rickshaw from my Home. I reached kalyan on time but i realized i am not carrying any money …God how can that happen to me …I went outside the station (with my mobile on ..listening to Budda’s running commentary about how far they were from station) in search of ATM. Finally got the cash, but by now according to budda, train had reached station. Anyhow we reached station (Oh i forgot to mention , Sneha, who was with me and cursing me all the way for me been so late) and there we were with gang ..6 of us howling and screaming out in joy. 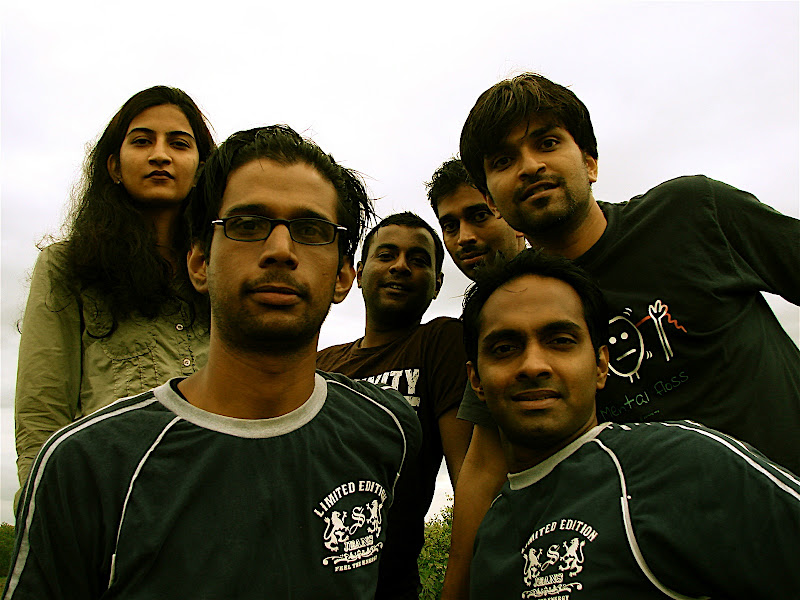 The whole night we didnt sleep ..hardly managed to get a couple hours of sleep..We reached Piparia station around 1:00 pm …The sky was ready to welcome monsoon ..One can feel the fresh breeze. We hired a cab from Piparia to Pachmarhi which is 45 Kilometer drive. The route was so beautiful with nice open fields on the way …which was very breezy…Mountain jungle road …it was very beautiful …and after around 2:30 we reached on the top of the hill ….

Pachmarhi – Queen of Satpura.. The place was filled with really cold wind ….Looks like God has forgot to close is refrigerator.. Lush green fields beautiful mesmerizing thick forests and rocky ravines. Acutally It was a part of a Satpura National Park. When we reached our hotel which was very near to Jata Shankar mandir. We stated at Royal resort which was a kind of cottage rooms. We had tea and food.

We checked in had a warm bath and good lunch at the resort and off we started to stroll on foot in the middest of Pachmari. Road were mostly dominated by Maruti Gypsy. It was 4:00 pm we started for Pandav caves. We walked nearly 30 minutes to reach Pandav caves. During our stroll we saw the army training camp. , a beautiful lake . People were very helpful so we could reach the destination without any hurdles.

The place was awesome ..Thought it would be quit ancient but modernization had ruined it ..Anyways the view from the pandav caves was superb we could see whole panchmari from the top. The garden beneath the caves was so beautiful.

It was getting Dark and so we headed towards our resort. On the way the path was getting darker and we could experience how it feels to be in the hands of nature in the darkness we some managed not to be get lost. We reached resort had a good dinner and waited for the next day .

Places we never imagine …Places that can be so divine and terrific to view..Such was the place Jatashankar Mandir..Not a usual mandir ..It was the worshiping place for sadhus and aghories ..there were lot of tales abt sadhus worshipping and pleasing Lord Shiva. One can get feel the power of Lord Shiva the feel of his existence. We had hired a gypsy to tour around panchmari. Our first destination was Jatashankar madir. We were stopped some where in between the hills ..The hills were rugged and tough with the natural caves formed inside it .

These caves were used by our very own bollywood community to shoot films and songs .The most famous was the Ashoka movie which was shot in the holy terrains with Shahrukh Khan and Kareena Kapoor ..Actually most of the place in MP was used in the movie ..So beautifully it was shot …Anyways back to our tour ..we started walking ..to out surprise we though we would be climbing those hills but we were asked to follow the crowd which was moving downwards

Into the Heart of India was last modified: September 3rd, 2019 by rajeshkotian

In continuation to my previous write –up, City of Gardens & Canals – SUZHOU (China). Morning we checked out from the hotel Sofital –…