Its was long time I been deciding on getting on to some beach destination for 3 days with my family. I began to prepare my itinerary for weekend tour to Ganpatipule. I called up my friend Shanker who joined me along with his family. We decided to drive from Mumbai to Ganpatipule. 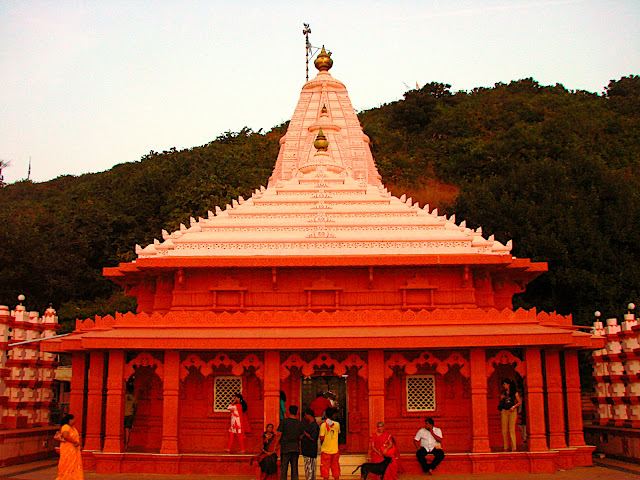 Day 1
It was a joy ride to Ganapatipule from Mumbai. The road was very smooth as compared to the usual roads we encounter and the scenery, no words for them. We started early morning around 7:00 PM from Thane. Filled up our gas and headed towards the experience. Around 2:00 PM we reached Ganapatipule’s Landmark Resort. The resort was placed on the Hilly side of the beach and we got the room on the topmost side. I was excited and started to capture my surrounding which was facing the magnificent sea. I was so flabbergasted watching the spectacular view. 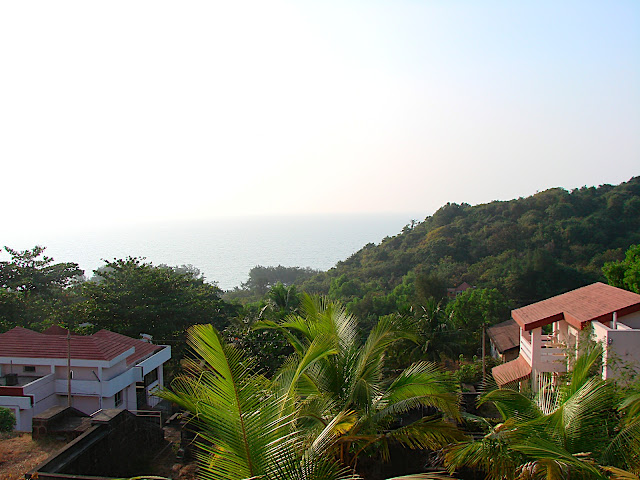 It was an experience to see sun go down for 2 days.

We went down the beach after having a good lunch at MTDC hotel. Best meal you could get there and Solkadi which is must have drink when you are in konkan ….we roamed around the undisputed beach. 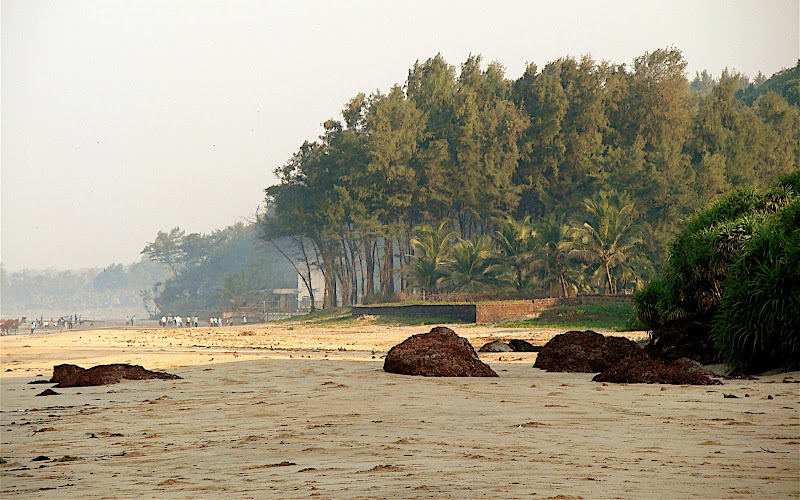 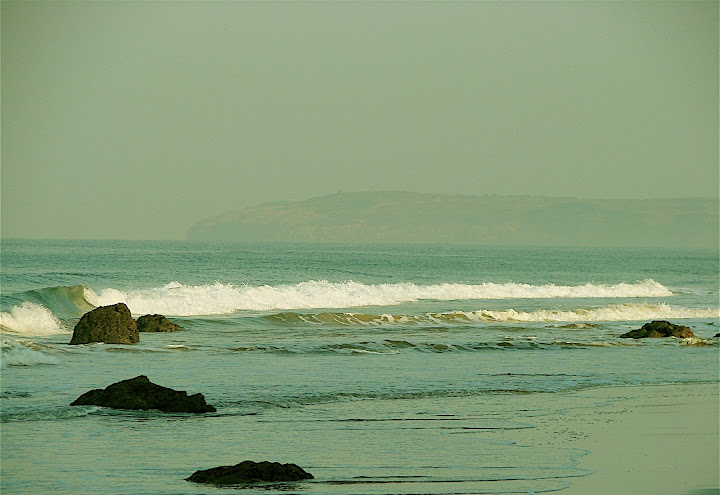 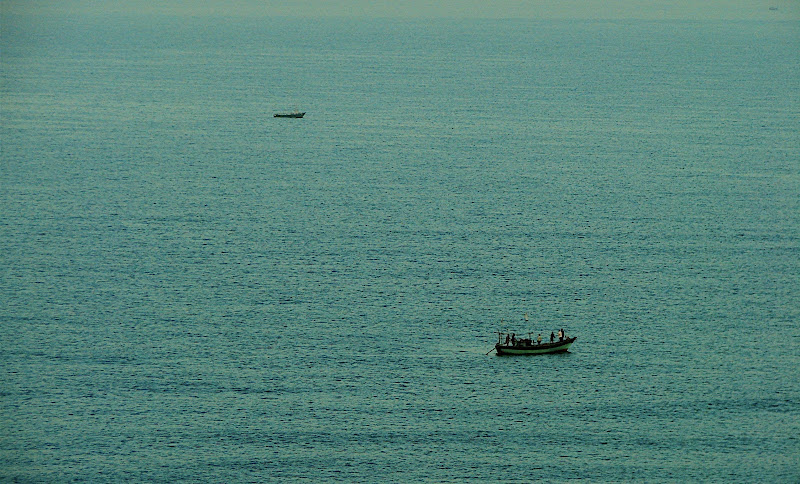 Early morning myself and shankar thought of exploring the beach. Its was awesome and beautiful could see couple of fisher man on there boat some reef and stone caves ..It was mindblowing. 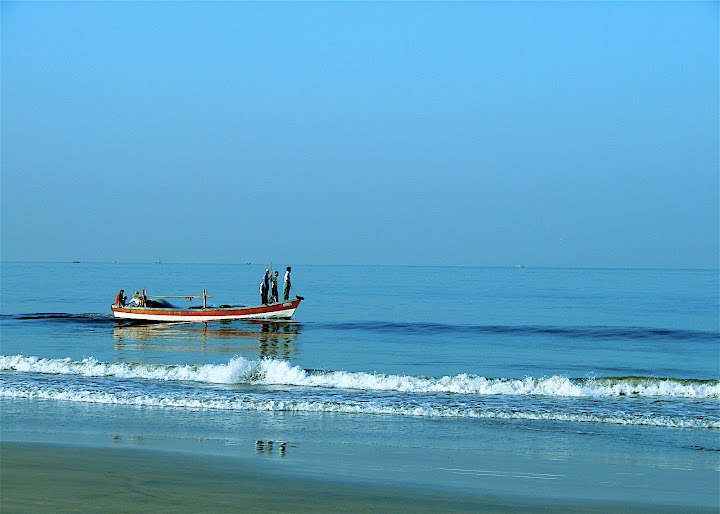 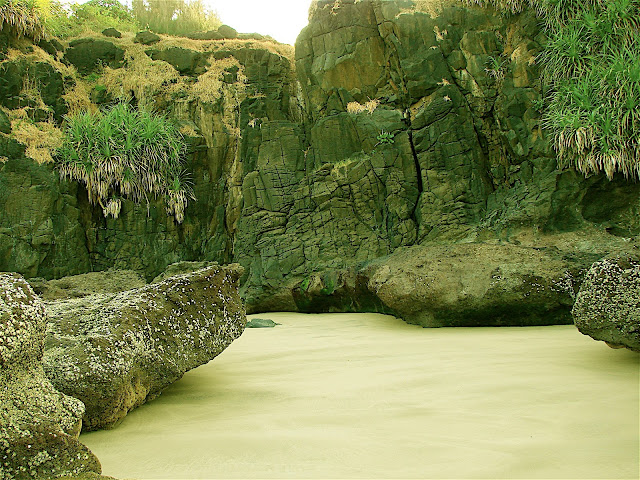 Then with family members we went to Ganpatipule Temple. This temple is meant to be one of the Navas (Wish Fulfiller) and Swayambhu (self-originated) Ganapati. It’s a very old temple and must say a well maintained temple. According to The mountain exactly behind is Ganapati’s head or stomach. You need to circle around the mountain whose radius is 1 km instead of idol.

We thought of having lunch at MTDC but then we found a Veg joint which was called Brahmanache Jevan. It had a good Authentic organic food. After a good meal we headed off to Jaighad Sea Fort. A structure so authentic at its kind. 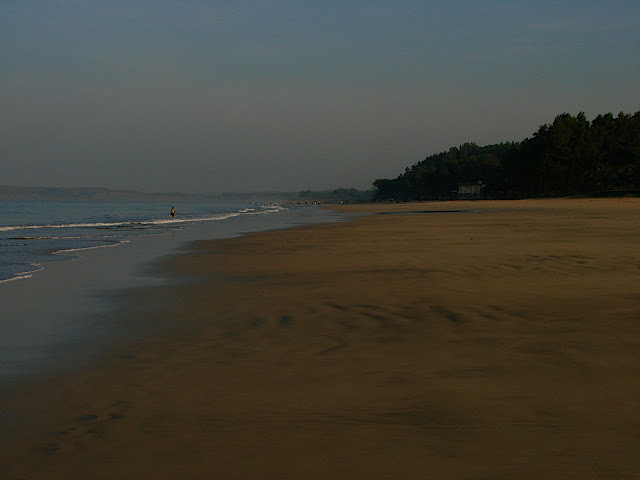 The Narrow and beach siding roads made our day to ride. Felt like this road shouldn’t end. As we moved on we could find good beaches and a distance a head we could also see some pillars I couldn’t figured out what were those .I guessed they were here from the days of Shivaji Maharaj. 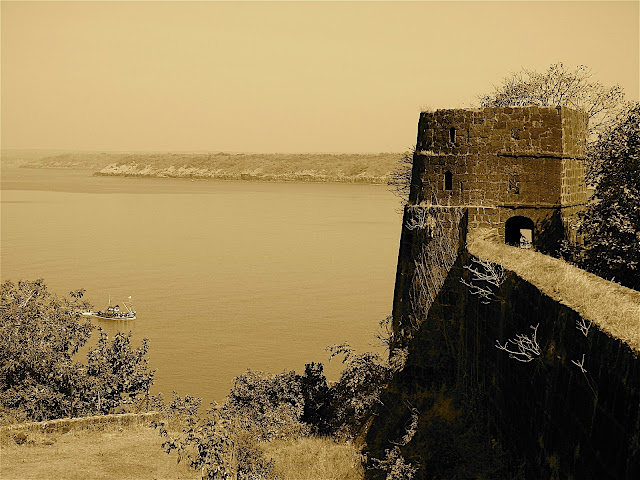 As we were nearing Jaighad i could see a big power plant coming up and the things on the far end beach was not good. Some company has started to build a port.

The best part of the Jaighad ruins is that its raw and earthy. Bricks are so strong that i would stand more than thousand years relishing the history of Shivaji Maharaj. The creek on the other side was sparkling and the village below was beautiful. 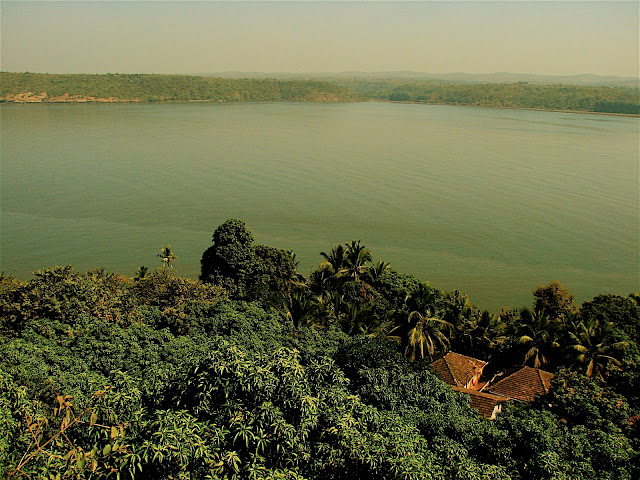 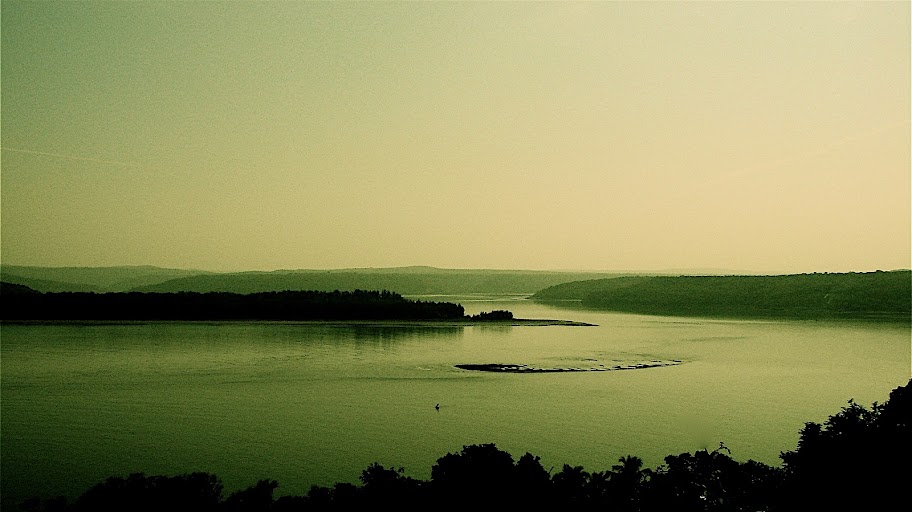 After a while we headed towards light house which was build during the British Raj. Road was not so good infact there was no proper road go there. So we just watched it and moved towards Karateshwar mandir.. 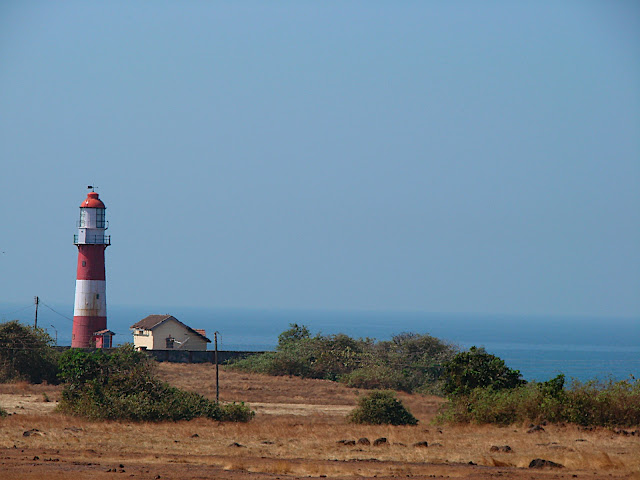 A splendid view below the rock , One can just get carried away with the mesmerizing beauty. Visted the temple and went back to our hotel. 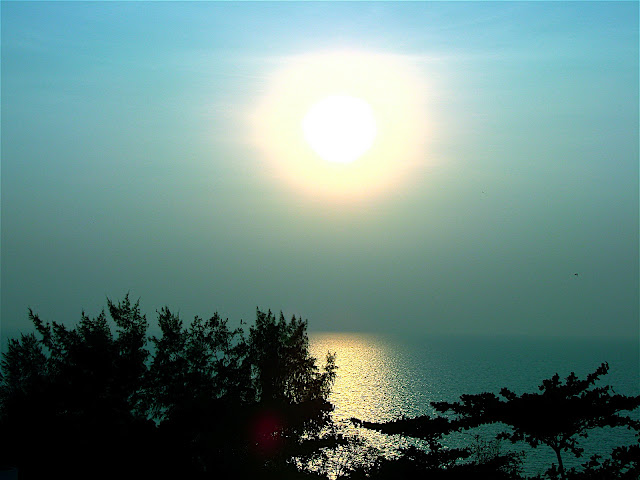 Day three was quite amazing ..WE thought of starting from ganpatipule very early as we though of going to Maleshwar temple. I must say its a MUST see place .. Between the big moutains the temple is situated inside the cave . The cave is so dark that you could hardly see any thing ..and (Which came to know later) there are snakes on the roof of the cave … 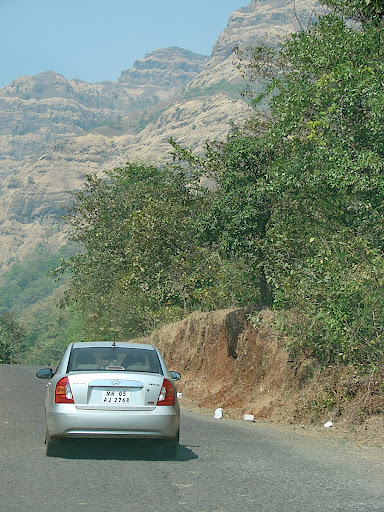 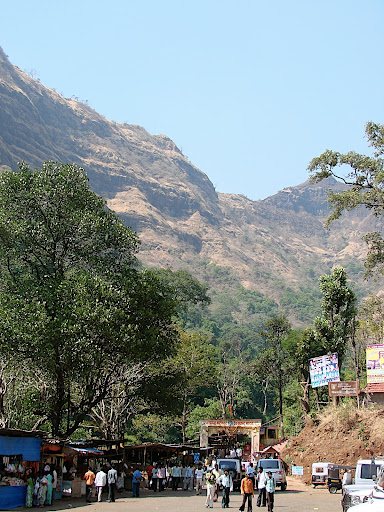 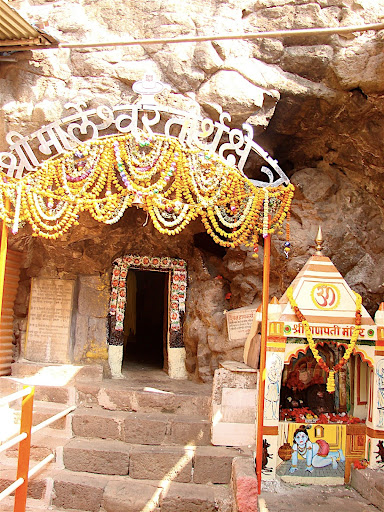 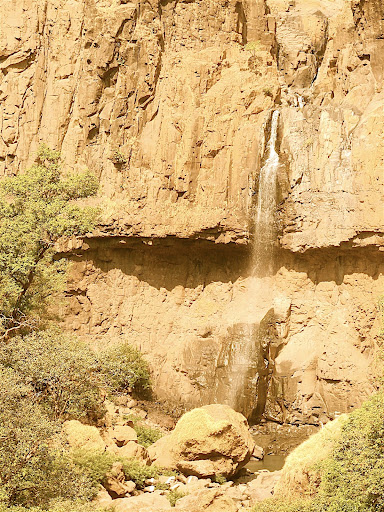 After the Darshan we made our way back to Mumbai with memories and Snaps to cherish ..

Hope to see somewhere while Traveling

Ganapatipule – The best in Konkan was last modified: December 26th, 2019 by rajeshkotian

it just cant be explained in words the joy of driving in rain and that too on Delhi Panipat road.It was raining so heavily that on few occasions the wiper would prove to be futile.It was an awesome drive till Chandigarh, barring few diversions due to construction work going on on few stretches.
After crossing the city we were on the Nangal Una road that road was not bad either but had no comparison to delhi-ambala highway!