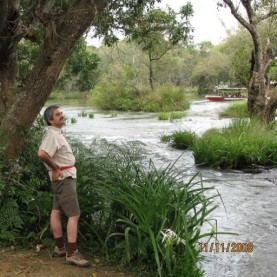 …Then the trek started in dead earnest, and soon we were walking through some shoulder height elephant grass. The guides showed us some exotic butterflies flitting about in the grass. At one place they pointed out to some Niligiri langurs peering down at us from the high trees. That really made us feel that now we were being stalked and hunted rather than the other way around…

Kuttanad is a region in the central and southern part of Kerala stretching from Kochi down upto Kollam (formerly Quilon), and bordered by the…

After visiting the Kumbhalgarh Fort, Ranakpur, the Krishna Temples at Kankroli and Nathdwara, and the Sajjan Garh Palace, we were now on the last leg of our trip to Mewar, Rajasthan, and had two full days to take in the beauty of Udaipur, the City of Lakes and Palaces. This beautiful city is also sometimes referred to as the ‘Venice of the East’, ‘Most Romantic City of India’ and ‘The Kashmir of Rajasthan’.

Udaipur was the capital of the kingdom of Mewar, ruled by the Sisodia clan of Rajputs. The founder of Udaipur was Maharana Udai Singh II, father of Maharana Pratap. Udaipur was founded in 1559, when a hermit blessed the king and asked him to build has palace at a spot on the east ridge of the Pichola Lake. In 1568, the Mughal emperor Akbar captured Chittaurgarh, and Udai Singh moved the capital to the site of his new residence, which became the city of Udaipur. As the Mughal empire weakened over the years, the Sisodia Maharanas recaptured most of Mewar district. Udaipur remained the capital of the state, which became a princely state of British India in 1818.

After India’s independence in 1947, the Maharaja of Udaipur acceded to the Government of India, and Mewar was integrated into India’s Rajasthan state.

The fort is built on a hill at a height of 1100 metres and requires a considerable effort to climb to the top. But once you are in the palace at the top of the fort, also known as ‘Badal Mahal’, you are rewarded with awesome views of the forested Aravalli hills, with the Mewar region on the eastern side and Marwar region on the west. The forests surrounding the fort comprise the Kumbhalgarh Wildlife Sanctuary which is home to leopard, sloth bear, monkeys, wolf, jackal, sambar, peacock, jungle fowl and a host of other birds and animal species.
[caption id="attachment_94003" align="aligncenter" width="640"] We were driving down to Goa one more time, our fifth holiday in Goa since December 2001. I had booked in Club Mahindra’s Varca Beach resort almost two months ahead. We got the booking easily because it is the end of blue season (slack season) at this time in Goa. Only die-hard Goa lovers go at this time because of the monsoon rains.

You are really spoilt for choice when it comes to restaurants in Goa. Besides the beach shacks, where you can sit on the sands and gaze out at the sea, sipping on a drink, while waiting an hour or two for your meal to arrive, there are many restaurants inland which also serve excellent food at very reasonable rates. There is a fusion of East and West, Portugese and Indian, meat and vegetables, which makes Goan cuisine unique. Coconut is used liberally, along with other Indian spices in the cooking. ‘Fish curry rice’ is the most common food and available virtually in every restaurant. The different types of seafood on offer in Goa includes pomfret, kingfish, ladyfish, mackerel, tuna, shark, crab, prawn, lobster, squid and mussels. Chicken, pork, mutton and beef dishes are also on offer at all the restaurants, cooked in the popular Goan flavours such as vindaloo, balchao, recheado, xhacuti and caldin.
We had already planned that we would include at least one meal out at a shack or restaurant in our daily sight-seeing itinerary. One precaution we always took was to carry our own drinking water if we did not want to order a drink, or pay for a bottle of branded mineral water.

At 12.30 pm we crossed over into Karnataka, and paid another toll. Immediately we could sense that we were in a different state. The traffic was much less in Karnataka as compared to the heavy traffic right upto Kolhapur in Maharashtra. The scenery was better, with undulating hills in the distance. There were flowering bushes in the road divider which made the drive more pleasant, and lay-byes with public utilities at regular intervals along the highway.