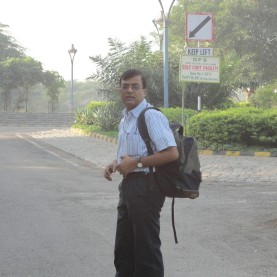 At Jyotisar, I was standing at the very centre of the battle, which had taken place centuries ago. The atmosphere was peaceful, serene and totally religious with no sign of remorseness connected with the battle. It was certain that the war cries of the famous battle of Kurukshetra have given way to the mass religious sentiments in as much as people had forgotten that it was ultimately a battle field.

The defeat of Marathas ultimately proved to be beneficial to the British, who took advantage of the power vacuum. It is said that the third battle of Panipat had paved the way towards the British domination of the India as a country.

After the boat turned right, the guide indicated towards some rocks of white marble that were having small pores/holes on their outer surface. He narrated the story of the shooting of the scene of gun-battle between two Bollywood heroes of yesteryears. The heroes were shooting at each other from opposite sides of the rivers and the bullets had dented the marble. Everybody was convinced by the story and hummed as a token of their acceptance of that theory.

Sometimes, when you are too passionate about something, one gets a shock when the reality strikes suddenly. Deeply enamoured in love with the river, when I was approaching it, the reality of people struck me with deep sense of sorrow. I saw the poor children standing in the waves and searching for the coins which devotees throw in the water. I stood there for a while and wanted to ask those children about their reasons to do the same and to convince them about the risks that are generally associated with such activities in the middle of a raving water flow. However, after pondering over the situation, I desisted from entering into any kind of dialogue with those children, numbering around fifty. It was the example of extreme penury striking me with a reality check and shaking my conscience. All recent events of displacement of tribals during Bargi Dam and Sardar Sarovar Project revolved around my memory and I stood there dumbstruck. The modern day reality was mean and much beyond the well-meaning words of “Dakshin Ganga” and “mekal-kanya” etc.

But Chhotu drove his machine like hell. I still do not know whether he was driving in anger or driving made him happy. The other plausible reason, of course, would be his pressing urge to go to the toilet after finishing off his sorties quickly. He was putting the boat into the ultimate efficiency test. The boat was flying on the waves. At number of times, it was on air for a second or so. At other times, it skidded off the waves at full speed. Chhotu was fast and furious. I had been to the drive on the speed boat at many places in the country and had experienced the speed and the thrill connected with it. But, here was the fastest pilot driving his machine like a maniac. And, he did not say a word. I also started believing whether he could listen to our shrieks or not.

Half an hour and a few rounds of the circles on the water later, Chhotu sped his boat towards the jetty. Docked it, took the keys out of the slot and immediately sprang onto the dock. When I came out of the boat, I heard him saying “Thank you”, two evergreen words that trickled up his throat. I have yet to understand the nature of his thanks. Either it was his graceful way to thank his passengers to survive his driving that day or it was just a normal gesture from a stubborn grumpy man, who could not say anything else. Anyway, that fast drive in the speed boat was also a pleasure. What’s the fun of speed boating, if it was not dangerous? And, I was standing safe and sound on the land to start the same life once again. Thanking Chhotu in return, I returned to the Maikal Resort.

As it happens, when God takes away something, it gives something to bank upon. The queen also had some of the most trustworthy lieutenants to manage the affairs of the kingdom. I also found an old temple of Mata Sharda near the fort. In fact, it was situated just at the base of the hill. Somehow, I thought that Goddess Sharda gave immense strength to our queen to take up the responsibility while re-building her own life with the growth of her son, who was known as “Veer Narayan”. Due to safety reasons, the queen had also shifted her base to Chauragarh.

Five more years passed under the rule of queen bringing a sense of normalcy in the kingdom. Then, the destiny struck again in 1556 AD, the independent sultan of Malwa (Present day Mandu) crossed the distance of 650 kilometres and attacked the Queen thinking that he would not be met with any resistance. But, he was proved wrong. Even though, our queen was fighting her first battle, she came out victorious. Baz Bahadur had to run away for his life.

The competition gradually became tougher and louder till there was a total din. Amidst the chaos, looking at the prospects of not being able to find a clear-cut winner, the challenge-competition was halted in the middle. In that interlude it was the perfect time for telling the story of an old woman, who lived alone in a hut at Jabalpur about 650 years ago.

In despair, when I came out of the inner sanctum sanctorum, my eyes fell on the outer wall of the main dargah. There were two marble plates fixed on the walls on which the life story of the Shaikh was inscribed. Hazrat was born in Lucknow, in a family that had migrated to India from Iran. His grandfather and father were given the positions of responsibilities in the government of those times and they soon had become part of the elite class of Lucknow. Hazrat was born with a fire of longing in his heart to know almighty and was always searching for knowledge by going to one teacher to another. During such exercise, he came to know about a Sufi Shaikh Shah Maqsus Alam residing in the town of Banda. In the tender age of 13 years, he left the comforts of his home surreptitiously and went to Banda and became the disciple of Shaikh Shah Maqsus Alam. There he acquired spiritual and worldly education. After the demise of the shaikh, he went to Bareilly to become the disciple of Hazrat Tajul-Aulia Shah Nizamuddin Hussain (R.A.). Though later he got married and had children, but his life was totally dedicated to the Sufi ways and traditions. During the first war of Independence, Hazrat Meerja Agah came to Jabalpur. There he established his Sufi tradition called “Agahiya Order” and in 1918 AD, he went for his heavenly abode.\

But deep down in my heart, I knew that I had chosen for that boat ride not because of my friend, but because of the Narmada. And, the Narmada never fails. It was she, who was nursing me while I sat heads down at the Gwari Ghat. It was she, who persuaded me to cross her so as to uplift me from a very deep guilt. If that being so, it was not possible that she would be letting me stand on the other side of the Ghat for the night. While, I was brooding over all that, suddenly we saw a boat crossing past us. We shouted for help, but he did not stop and went past sailing over the water. My friend lost his control and started cursing the boatman, both who had left us stranded and also who had sailed past us.
Half an hour or so more again passed with no means to go to the other side. The fear of being stranded on the dark ghats in the night was started as a test against the patience and the faith towards Narmada. Just in time, when the faith and the impatience started to rumble in the mind, we saw a boatman sailing towards us from the other bank. Gradually, the blurred image of the boatman became crystal clear. He was “our boatman”, with his boat.

One of the doyens of Hindi Movies, Prem Nath, also belonged to the Sanskardhani. He had once built a cinema hall in the heart of the city, which was named as “Empire Theatre”. From outdoor screening of the film to cinema halls and now to multiplexes, there is a great history of the growth of Indian cinema. But I still carry a fascination with the old cinema halls. So, after coming out of the Jabalpur Station, I went to a crossing where the old building of that Empire Cinema was situated. It was completely in ruins. I felt much attached with the Empire cinema and climbed up the fallen bricks to see it from inside. I was astonished to find that the speakers were still clinging to those walls. In its heydays, that hall must be the cultural hub of the Sanskardhani, graced by the likes of Raj Kapoor, Nargis and Prem Nath.