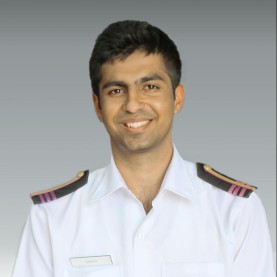 Other Other famous cuisines include: Kahwah (GreenTea) and Noon Chai. Kashmiris are heavy tea drinkers. Over 20 varieties of Kahwah are prepared in different households. One must taste the unheard “Kamal Kakri ke Pakore” near Nishat Gardens in Srinagar. Kashmir offers a vast variety of Kebabs. Non-Vegetarians must enjoy the mouth watering Chiken,Kebabs etc. But then, Nothing can beat the very own Lucknawi Kebabs! (Seriously),

The Phoenix Bay Jetty is situated in the city and is home to all merchant vessels which are responsible for trade and commerce. The Jetty is the boarding point for the ones who want to visit Neil or Havelock Islands. We had our tickets in hand which were booked prior by Mr. Ravi (Tour Manager, Contact: 09434261219). The tickets for Havelock Islands are sold out within minutes. It is advisable to ask your agent/tour manger to get the same booked as soon as you land up in the city. There are private as well as government ship operators which provide connections to Neil and Havelock. Being the off season (August) the private operator (called as Makcruzz) was closed down and the only available option a government run ship.

The tag ‘Government’ automatically lowers the standards and gives me a bad impression of what so ever even before I see it. Anyways, the ship that we had to board was called ‘M.V Jollybuoy’. We were booked in the only available option of seating lounge. One needs to spot his vessel and then proceed for boarding. As we stepped inside the ship, we were greeted by the Chief Officer of the ship who also checked our tickets. He later on transferred us to the seating hall. The so called seating hall had three rows and seats faced opposite to each other. It also had a television set which was cleverly hidden in one of the compartments. The hall seemed more like my seamanship class room with lots of safety boards and demonstrative visuals. Good enough! The ship departed right on time at 0630 and that is when I got to know that we can go on the bridge.

Long back, a group of tourists shot a video of the Jarawas and uploaded the same on the web. According to the United States, this act was not justified and it was classified as hindrance to the tribal life of the Jarawas. The issue was raised out loud and was finally brought up to the Indian Government. After all sought of discussions and panel meetings, the government decided to offer protection to the community. The jungle was then handed over to the police and CCTV cameras were also installed amidst the wild. A convoy system was setup wherein a convoy of vehicles at specific time will be accompanied by the Police officials to cross the jungle from Jirkatang to Baratang and vice versa. The government also banned the use of mobiles and cameras in between the journey. The first convoy had to depart at 0600 hours and we were to go in the same.

Always remember to carry your ID Card along with you as it is need at almost every tourist spot in the Andamans. The ferries depart every hour and we were to go by the 0930 one. We were not offered any lifejackets and the ferry setup made me worry. Safety was on compromise but yet again one doesn’t have any another option. Recently, a ferry sailing from North Bay to Ross Island sunk and as many as 21 people died. Why can’t we follow safety guidelines rather than waiting for accidents to take place? As soon as the boarding began, I was the first one to step in and occupy the seat ahead of the wheel room.

The pilot announced “Crew, Ready for takeoff!” The flight from Chennai took off sharp at 0500 hours. It is advisable to opt for a windows seat as on the approach towards the beautiful Islands, one gets a visual treat offered by Andamans.

Hello Ghumakkars We had spent three days in Kashmir and had covered Gulmarg and Sonamarg. If you still haven’t read the previous posts then…

Hello Ghumakkars We had spent two days in Srinagar, and were off to Gulmarg. If you still haven’t read the previous posts then click…

Hello Ghumakkars I’m back with yet another post on Kashmir.If you still haven’t read the previous posts then click here. It was our second…

Hello Everyone! As they say beauty is in the eyes of beholder. And that is so true of the Valley. In Kashmir there is as…