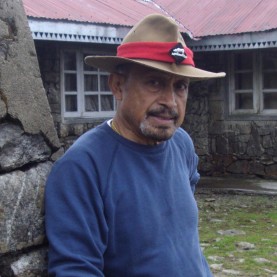 Over the Choppy Sea to the Andaman Archipelago Every year, our small group of veterans and ladies meet up and travel mostly to…

Siliguri to Pelling in West Sikkim is 131 kms and takes approximately 3 hours for straight drive. Needless to mention that the drive is subjected to imponderables like traffic snarl, road repairs and broadening work, tea and meal breaks. As such it is safe to plan approx 4 hours for the drive. Pelling to Khecheopalri is 32 kms and takes about an hour‘s drive along a graveled road. As usual the condition of road from Siliguri to the lake can best be described as “the good, the bad and the ugly”. Last year at a chance meeting a MLA from Jorthang told me that this West Sikkim road is being turned into a four lane highway, insallah.

Road from Siliguri to Sevoke is a smooth broad 2 lane highway (NH 31) that knifes through the neat sevoke Military Cantonment and Sevoke Forest. From Sevoke Bazaar to Coronation Bridge (3 kms) is another smooth, well carpeted road snaking along he mountain curves runing almost parallel to Teesta River. This road is adorned with good highway signs; however, unfortunately this stretch is marred by delays due to railway gate blockage and heavy traffic from/to North East, Dooars, Sikkim and Kalimpong. From Coronation Bridge to Teesta Bridge near Teesta bazar (37km) NH 31is forever in the making and subject to traffic jams & delays caused by repairs and expansion; as such, it can be dusty and slushy depending on the season.

Some more local families overtook us and surged forward at a fast pace, almost a routine walk for them. I wanted to keep my own steady pace using the umbrella as walking stick. At the age of 68, one needs to listen to one’s body and not rush to compete with others. We pushed every step, slow and steady and continued climbing. My thigh and calf muscles started aching demanding rest. As we kept climbing my breathing became harder and started roaring into my ears. We trudged on. The mountain breeze, when it came, helped me like a breath of fresh air. A crow hovered upwind in search of a prey perhaps. The climb became grimmer as we continued to angle towards the top. My shirt, which had been soaked with sweat, now felt stiff and uncomfortable. I wiped the perspiration from my forehead that was trickling into my eyes. I glanced at the rock face towards my right and saw the holy Gompa across that looked like toy houses stuck together on the rock face with glue. It became bigger as we climbed further up and reduced the distance with the rock face. We pushed slowly with no sense of hurry. The aroma of the jungle was printed on every whiff of breeze that I savored. The mist rose from the valley below and started blotting out the tumbled slopes of the rocky cliff below the Gompa.
After about an hour and a half we reached a midpoint, rested and sipped water. It would be unwise to rest for too long as once the body gets cold it will be difficult to climb up, better keep the body warm and maintain the rhythm of the climb.

We met our guide who took us to our destination, Galling Resort, about 3 kms away from town along a graveled road. Located on the banks of Paro chu; the property was tastefully constructed and painted in unique mud color ethnic Bhutanese style. The view from the balcony was breathtaking with Paro Chu rumbling right in front across the road, part of Paro beyond and finally the valley rising to meet the misty mountains that made the distant horizon. Anyone with an eye for the nature or a plain nature lover is bound to be enchanted by the natural beauty, landscape that would make not spending couple of days almost impossible. We did just that. The resort was warm, comfortable with a cozy lounge, wood paneled bedroom and comfortable attached bath. Our rooms had the same view as balcony and decided to keep the curtains drawn and windows opened so as to be part of the beautiful view.

It was getting dark so without wasting time, just after a cup of tea, we set off to experiment the capital street with a look-see walk. The street was clean and lined by weeping willow trees that looked very nice. The buildings were Bhutanese style architecture that had four to five storey. We walked through light drizzle along the stone paved sidewalk. Surprisingly a melodious and rhythmic Western music filled the air; the source of the melody was a small open air stand that was extension of the main street. It looked quite unusual to see Bhutanese boys in traditional dress playing and crooning Western Tuned Bhutanese songs. A group of about 100 young men and women, gathered around the band stand were gyrating with the melody and rhythm of the music. All were wearing Bhutanese traditional dress, no jeans, pants and skirts. The dress code is strict; men wear “Gho” a kimono like knee length gown type of dress, tied by a long kamarbandh with long shocks and shoes. Women’s dress is called, “Kira”, an elegant wrapped around skirt like with a check or brocade jacket for the top. Both Tibetan and Bhutanese dress is alike except for few variations. There is also the marked difference in the material used in Bhutan. Whereas Tibetan men and women fancy any type of clothing materials for their “Bakkhu”, Bhutanese use only the traditional and colorful Bhutan made check cloth material for their “Gho” and “Kira”.

Phalut has only one Government owned Trekker’s Hut that looks an imposing colonial type hill cottage from outside but a haunted house from inside. The rooms were shabby suffering from years of neglect. Kitchen had the ancient wooden fire place for cooking and most part was black with wood fire soot collected over the years. I walked into the kitchen and found couple of people, not tourists, sitting by the fire and chatting, obviously this was the only available place in the huge colonial house that was warm to sit by. I walked in and announced in Gorkhali to the people present,” I am 70 year old retired colonel, just arrived after 21 kms trek, how are you guys going to make me comfortable”. Immediately there was commotion and everyone got up. The forest Guard got up and offered me the coveted chair. I asked as to who was who and found out that the one by the fire place was the care taker as he proudly told me, “ I am from the Tourism Department”. Rest was guides who had arrived earlier. I asked for a cup of tea and the care taker got busy brewing it in a black kettle, hardened by years of sitting on wooden fire. I learnt that the Tourism guy was the one and only representative of the Government. He was cook, care taker, cleaner, maintenance man, procurement officer, house keeper and overall in-charge. However, the Forest Guard being more elderly as also senior man of the Government, with beat post located adjacent to the lodge, was the de-facto boss of the town, specially for the weary guides and porters. When I pulled my rank and age he chickened out of the comfortable chair against the fire to my advantage and I promptly occupied it. How small things matter at the right time and place. Like when we march in the Army, during breaks the best shaded tree obviously goes to the senior most without questions asked. When I was climbing a snow covered mountain in Arunachal Pradesh in the winter of 1989, we had to camp for the night. It was snowing and the ground was too wet our tents, our local guide found a cave and made himself comfortable with a wood fire to boot. I walked into the cave with authority and sat by the fire occupying the only comfortable rock to sit on. Slowly my company commander followed and sat next to me and then another. Finally we found ourselves, a party of 10 reconnaissance team sitting by the fire. Later we ate and slept there, needless to say, me occupying the most comfortable slot next to the fire.