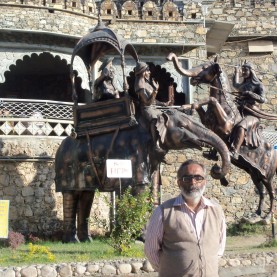 hahahahhaha……….. Any way the ordeal became less and plain road was there .  We were passing through  the forest area now and after a few minutes we entered the temple complex. So serene was the atmosphere there and about 30-35 vehicles parked inside the complex. Main reason that I found for heavy rush was that people from Jaina community revered the place and comee there just as they have Dilwara temples at Mount Abu. So a mixed crowd of foreigners and Indians there. And there stood the vast sprawling temple structure in white marble, so clean and so serene and so pious.