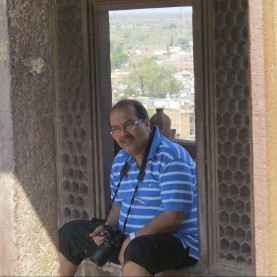 The return journeys, as always, make the heart heavy. This time my heart did put on a lot of weight. We decided to leave for Bangalore via a detour of ‘Talacauvery’. So we started very early on the next morning. Talacauvery, the source of the river Cauvery in the south was draped in a mystical legend.

The Aravallis cut across Jaipur and Sekhawati regions in North Rajasthan. The climatic conditions in the region are very harsh and extreme, ranging from sub-zero Celsius in winter to more than 50°C in summer. People of this region are known for their bravery and hard work and it is a fertile breeding ground for Jawans in Indian Army! Two districts of modern day Rajasthan, i.e. Jhunjhunu and Sikar can administratively be considered as the constituents of “Sekhawati” region. However the Churu district is equally important as the Sekhawati dialect is also spoken here and famous painted Havelis and Forts are omnipresent in all these three districts. The Haveli was to Banias, what the Fort was to Rajputs, an abode.