In this post, I am going to take you through our trip’s Day 4-8.

We set out to “Caleta Tagus” in the central western coast of Isabela island. In the morning we had a zodiac tour followed by a difficult hike. On the zodiac tour, we spotted a juvenile penguin shedding skin. The main attraction of the hike was the Darwin lake (extremely salty lake which does not support any life). Sailors who passed by this island had written the names of their boats and the year in which they sailed. The earliest one that we could spot was 1836. We also saw many species of Darwin finches. 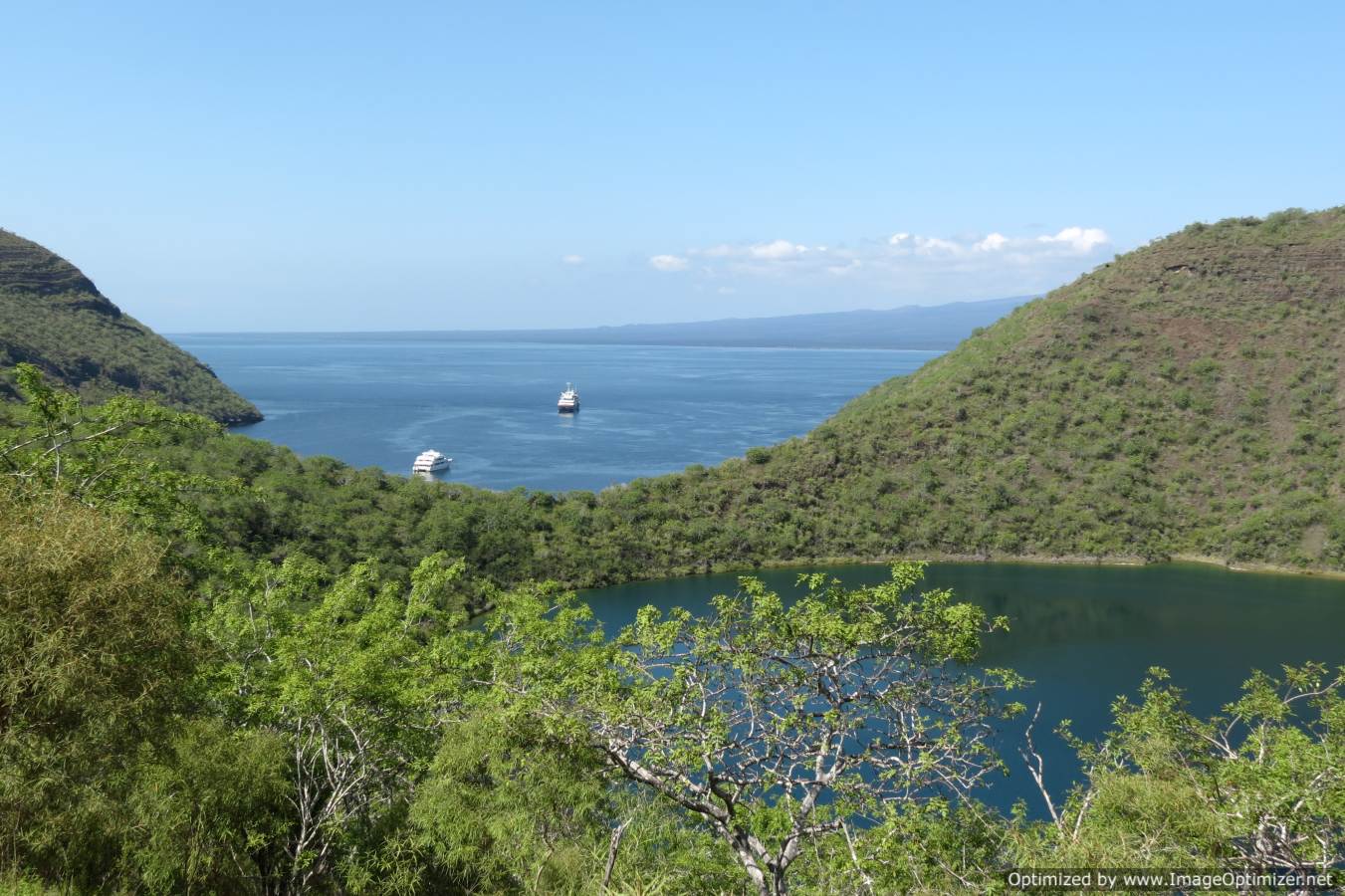 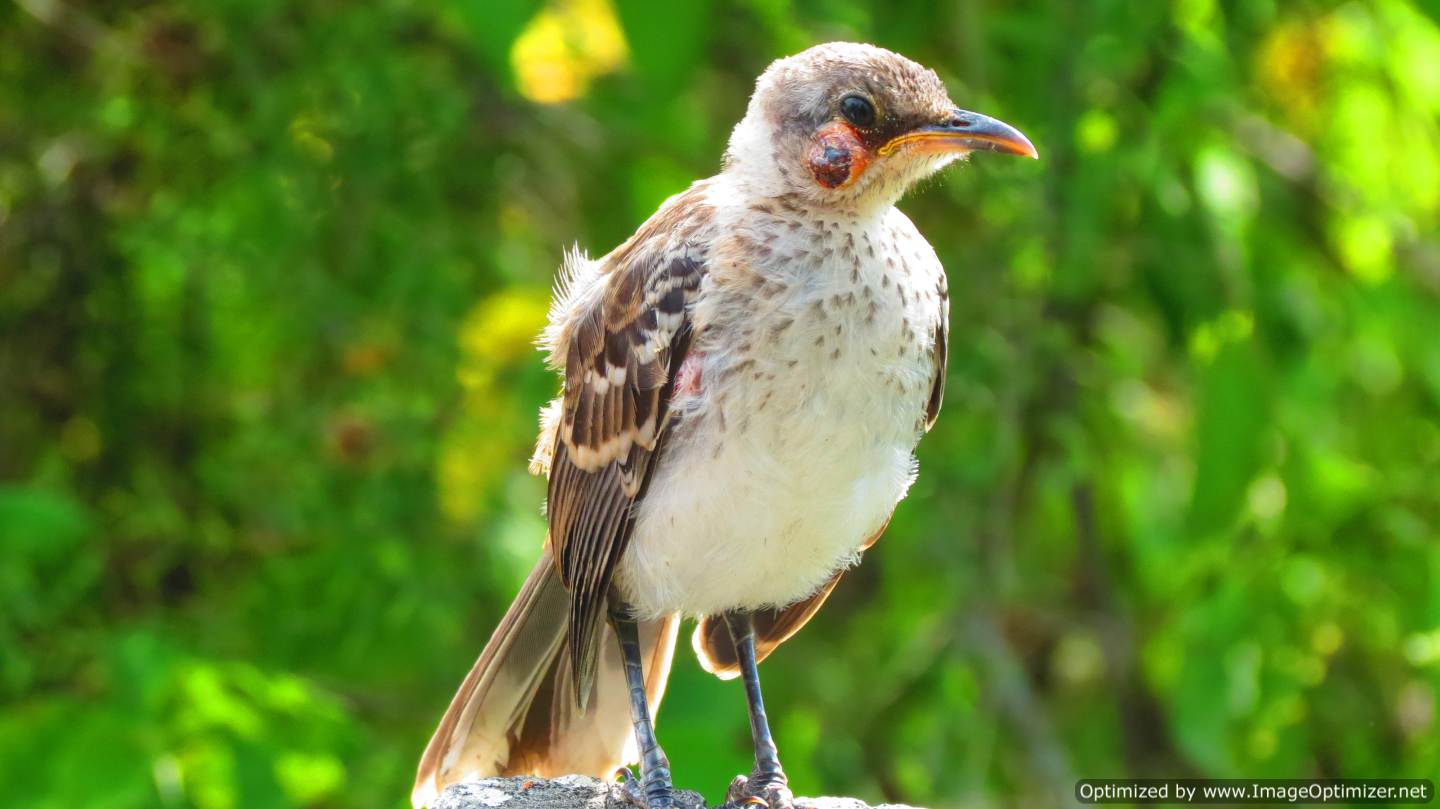 In the afternoon, we set out to “Bahia Elizabeth” on the zodiac. On this tour, we experienced a quintessential Galapagos moment. On a single rock, we saw sea lions, a marine iguana, Galapagos penguins, blue footed boobies, brown pelicans and crabs resting without disturbing each other (please see video below). 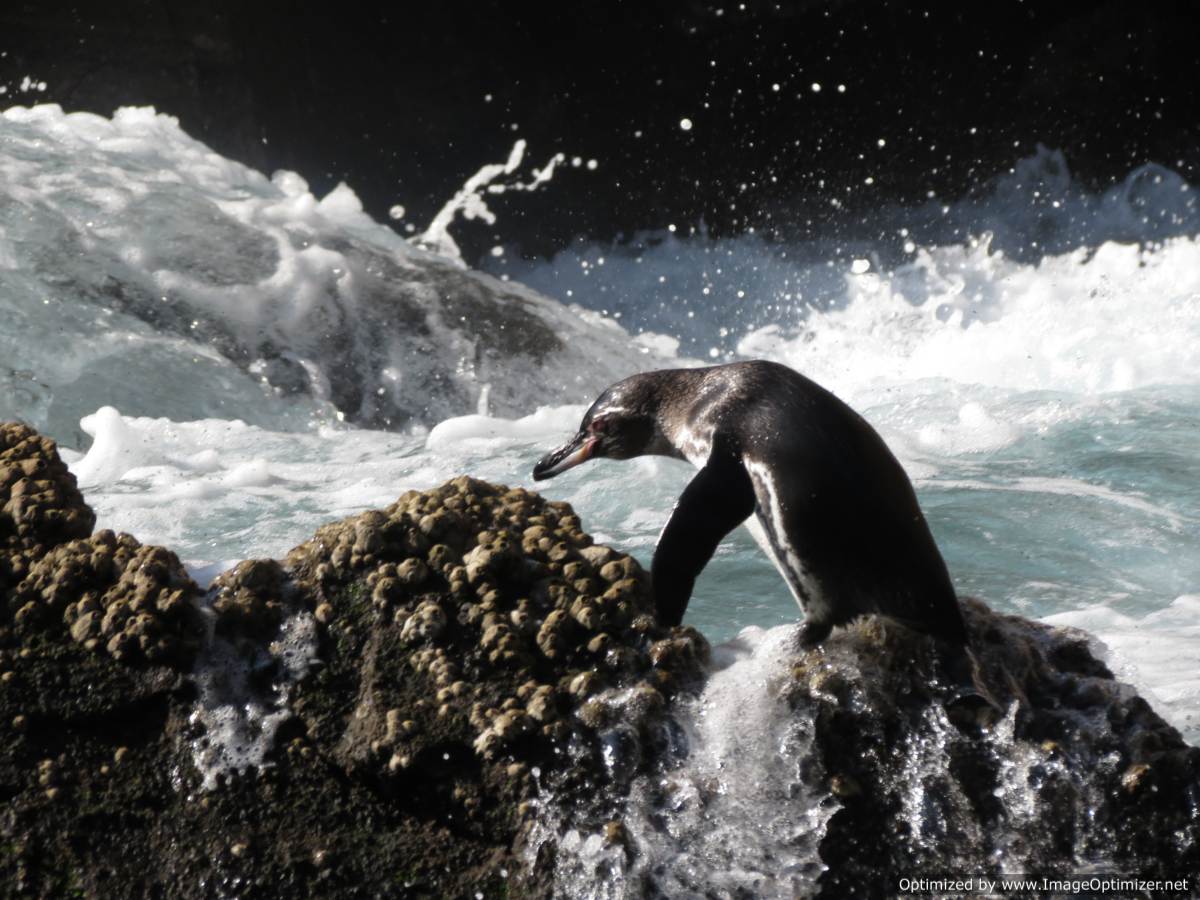 Galapagos penguin – my husband is really proud of this shot 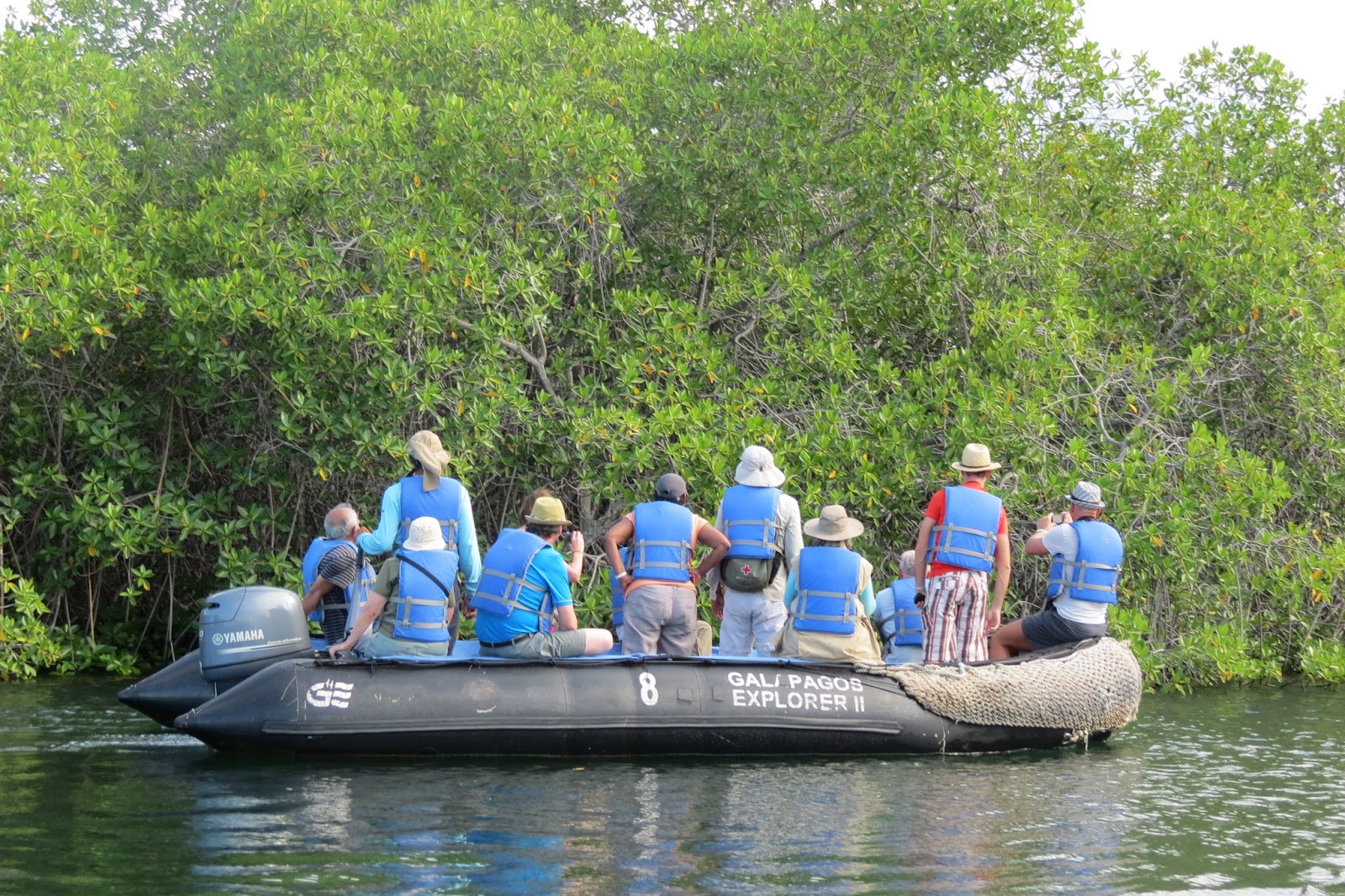 Zodiac tour in the mangroves

We then headed to the mangroves, where we spotted sea turtles, a school of golden ray fish, a school of eagle rays and mallot fish. The sea turtle was within my hands reach from the zodiac. The golden rays shimmered in the water in the sunlight. They were unbelievably beautiful. 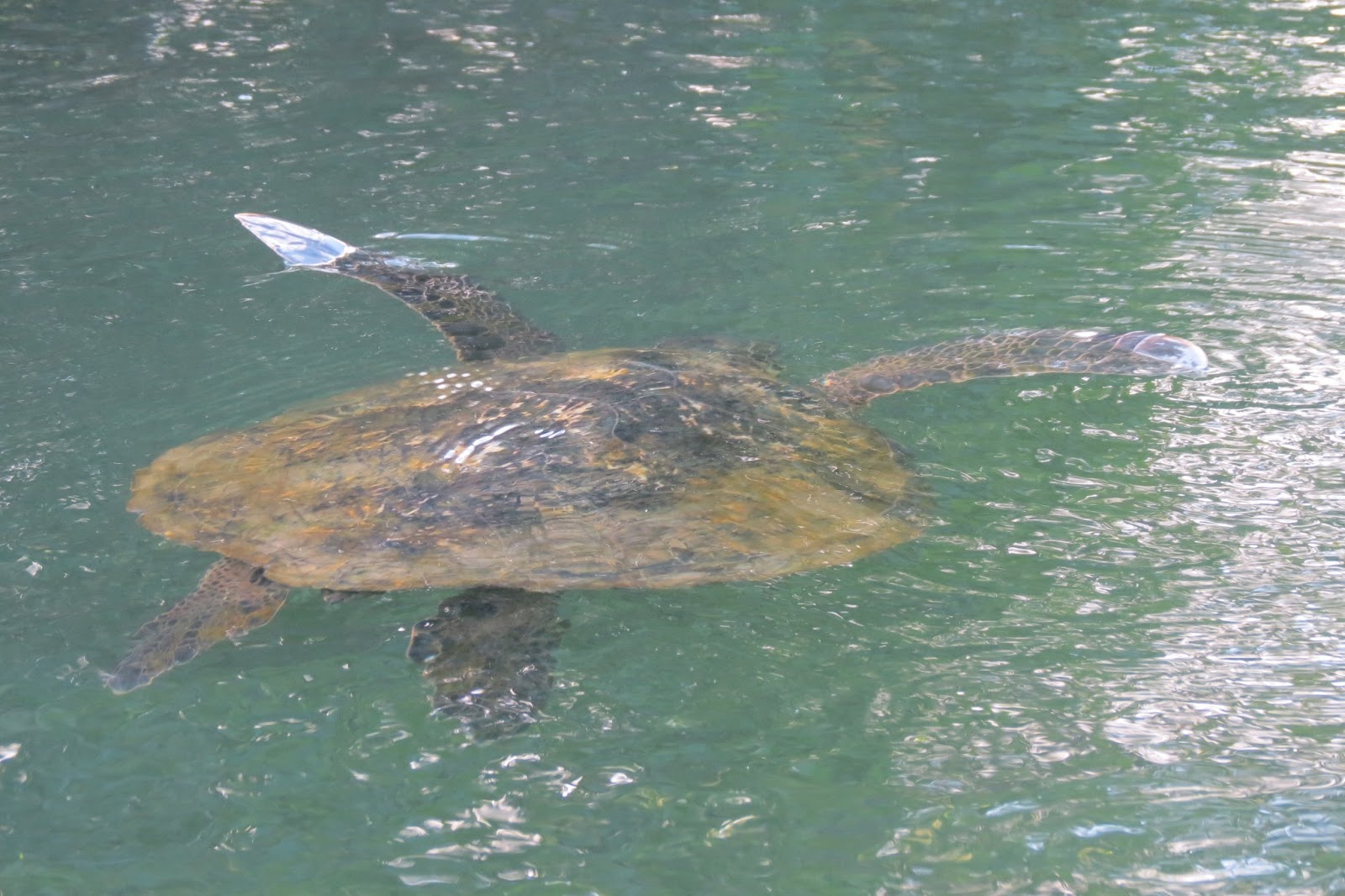 Sea turtle in the mangrove – its nesting area 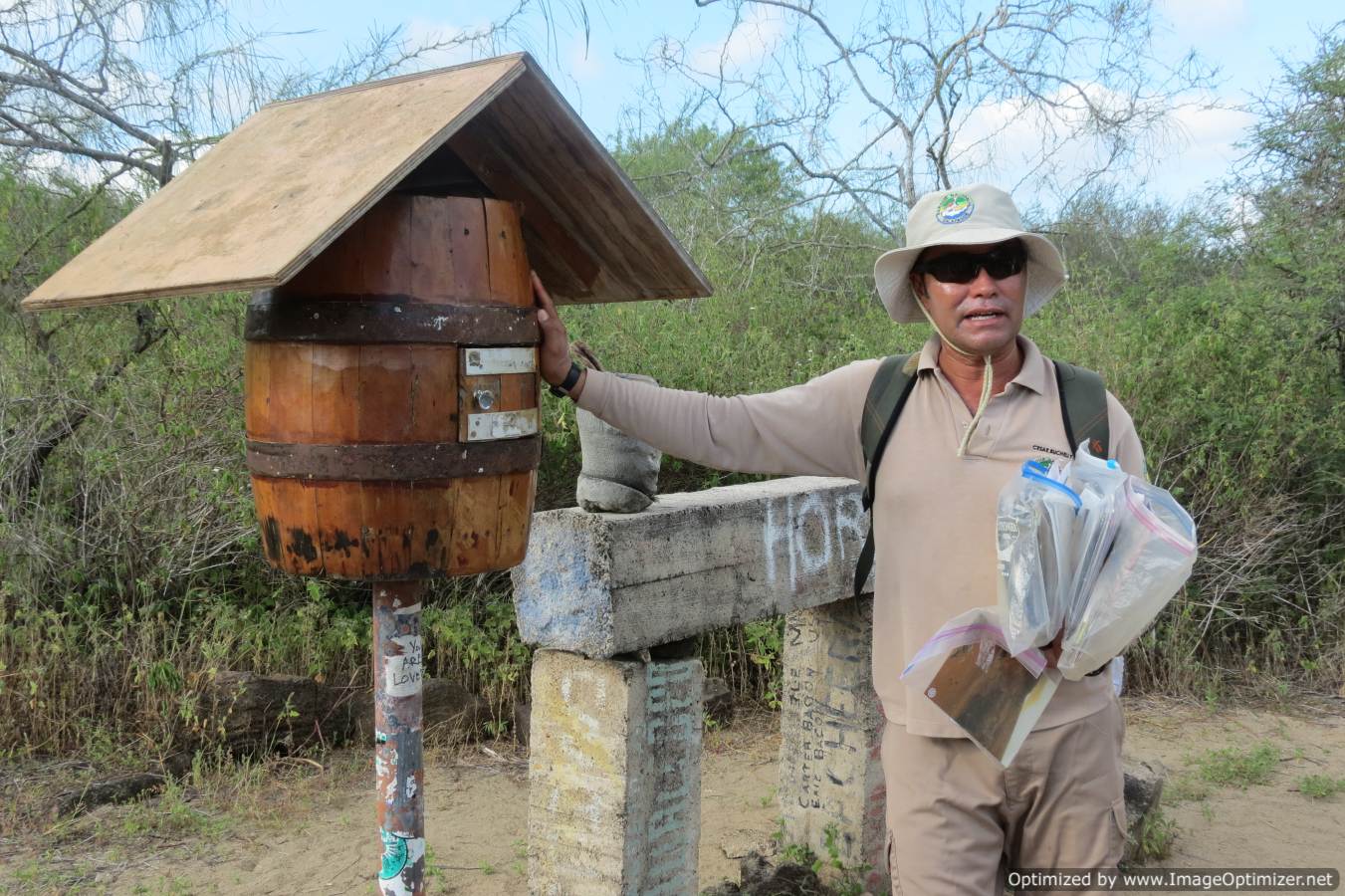 In the morning we set out to visit the “Post Office bay” in Floreana or Charles island. Eighteenth century whalers set up a wooden barrel that served as a post box. Sailors posted their letters and also picked up other’s letters to deliver them. The post box is functioning even today.
Flora: Palo Santo, Manzonilla, Galapagos cotton, salty bushes 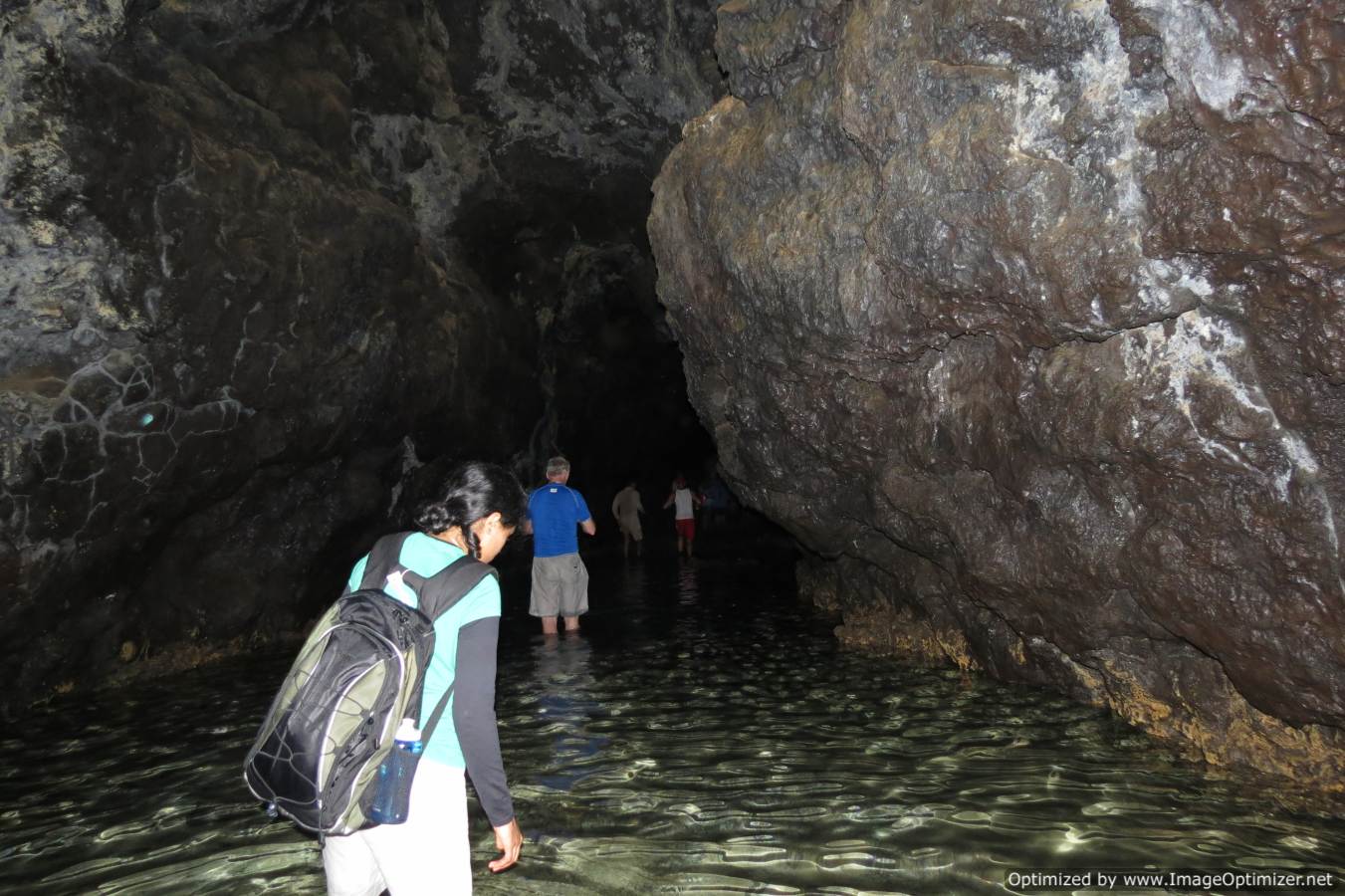 Later, we headed to the lava tunnel. It was steep tunnel that was formed because of lava flow during volcanic eruptions. It was so steep that at places we needed ropes to get in. It was pitch dark and there was knee deep water. It was a wonderful experience!

We were also given some time to snorkel at the beach but the water was so murky that we could hardly see anything for a long stretch. My husband says he spotted few rays though.

In the afternoon, we visited Punta Cormorant and had snorkeling time at the Devil’s crown in Floreana island. During the walk, we were supposed to see pink flamingos, but I did not spot any. Some others on our cruise said they did. These flamingos fly all the way from Bolivia to the Galapagos during summer. We had already seen the flamingos at Bolivia, so we were not so bothered. Also, on our way back on the zodiac, we could spot few sting rays and hammerhead sharks. 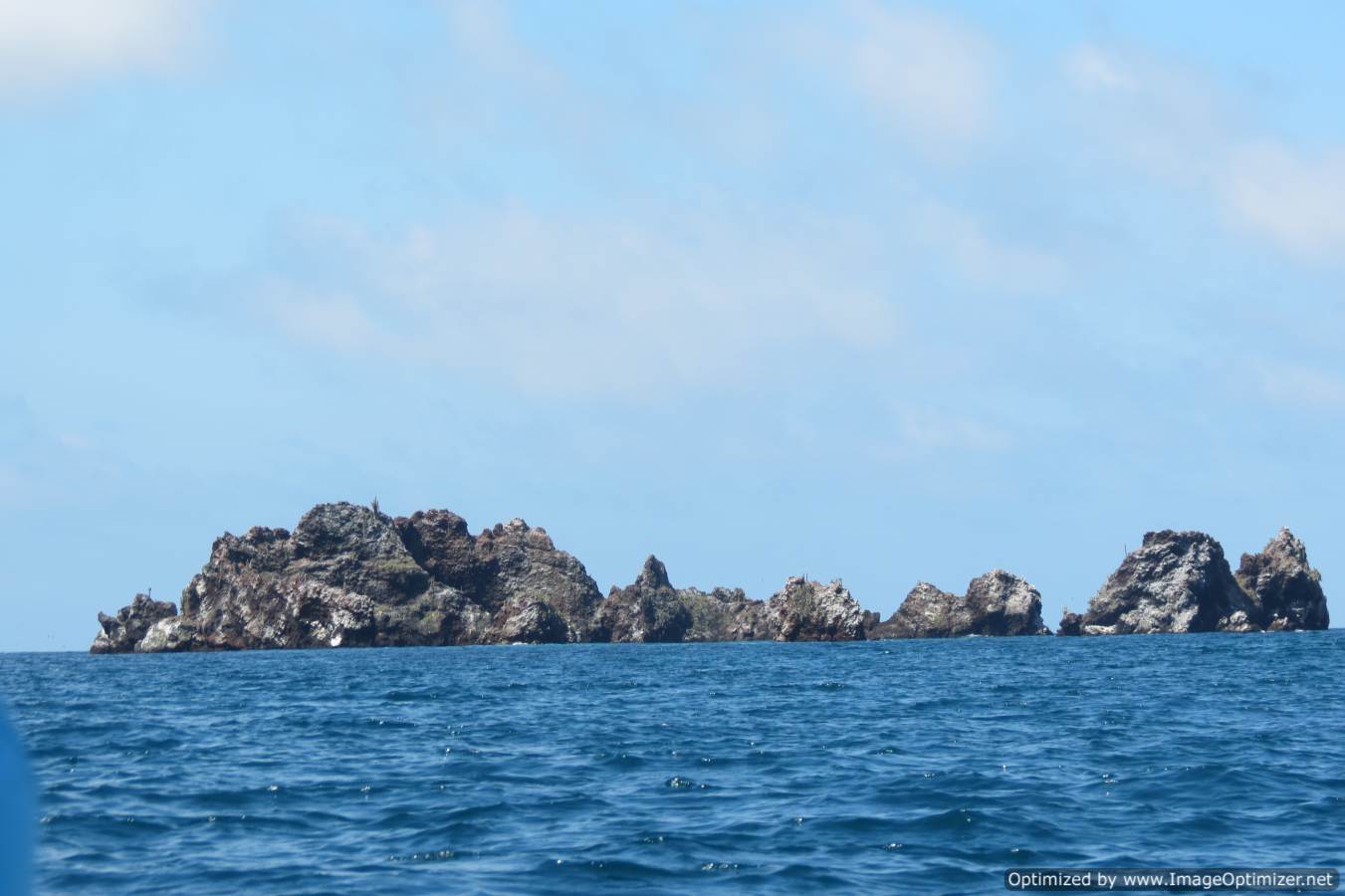 Snorkeling at the devil’s crown was really challenging because of high currents in deep waters in the Pacific Ocean. Devils crown is an underwater volcanic formation. This region has extensive marine life and is an attractive spot for snorkelers. The currents were so strong that I could not swim for more than ten minutes. My husband, being a good swimmer swam in the crown. He says he spotted hammerhead sharks along with sea turtles, sea lions and beautifully coloured parrot fish.

Day 6
In the morning, we visited “Puerto Baquerizo” – La Galapaguera, a small town in San Cristobal island. From the town, we went on a one hour bus ride to see giant tortoises (endemic to Chatham island) bred in captivity. 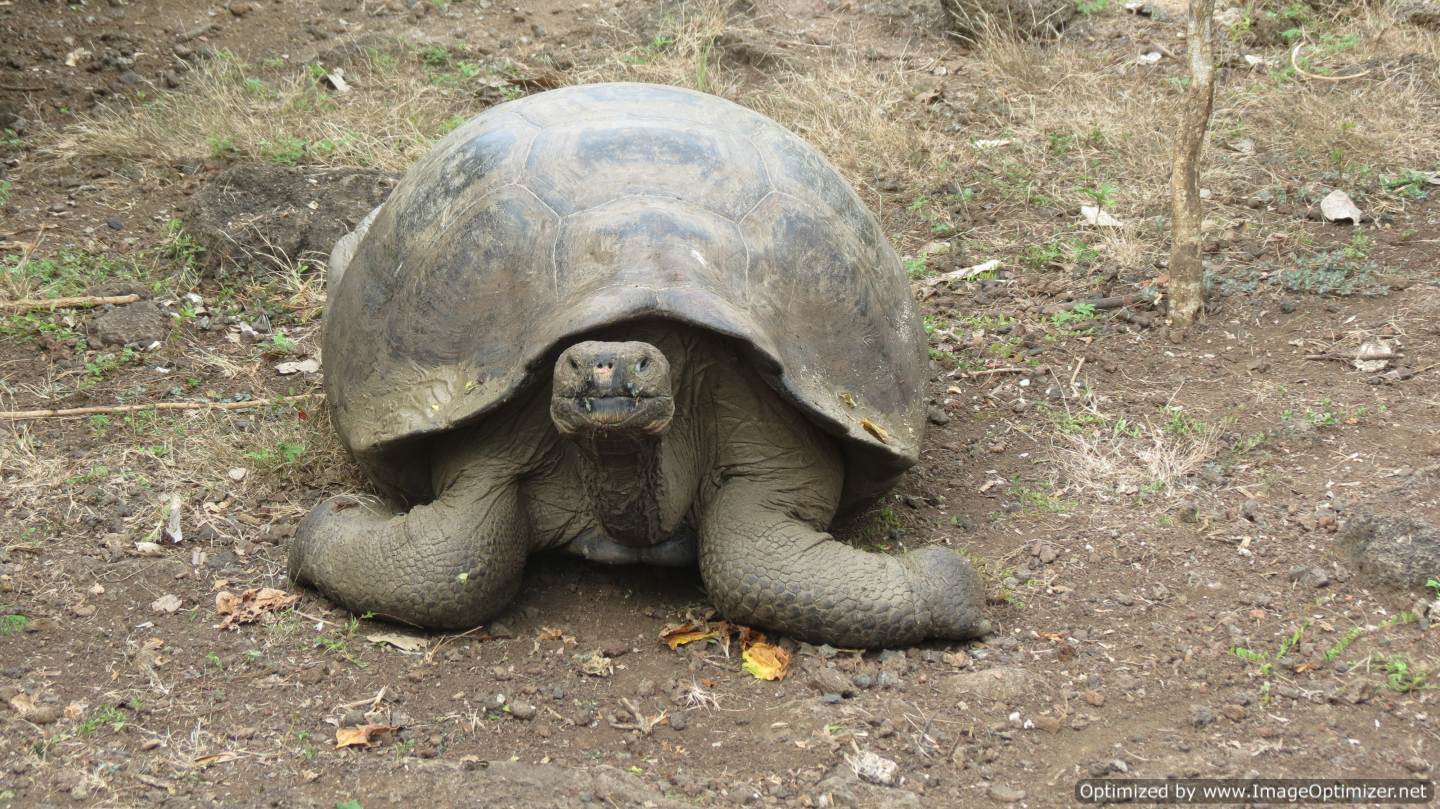 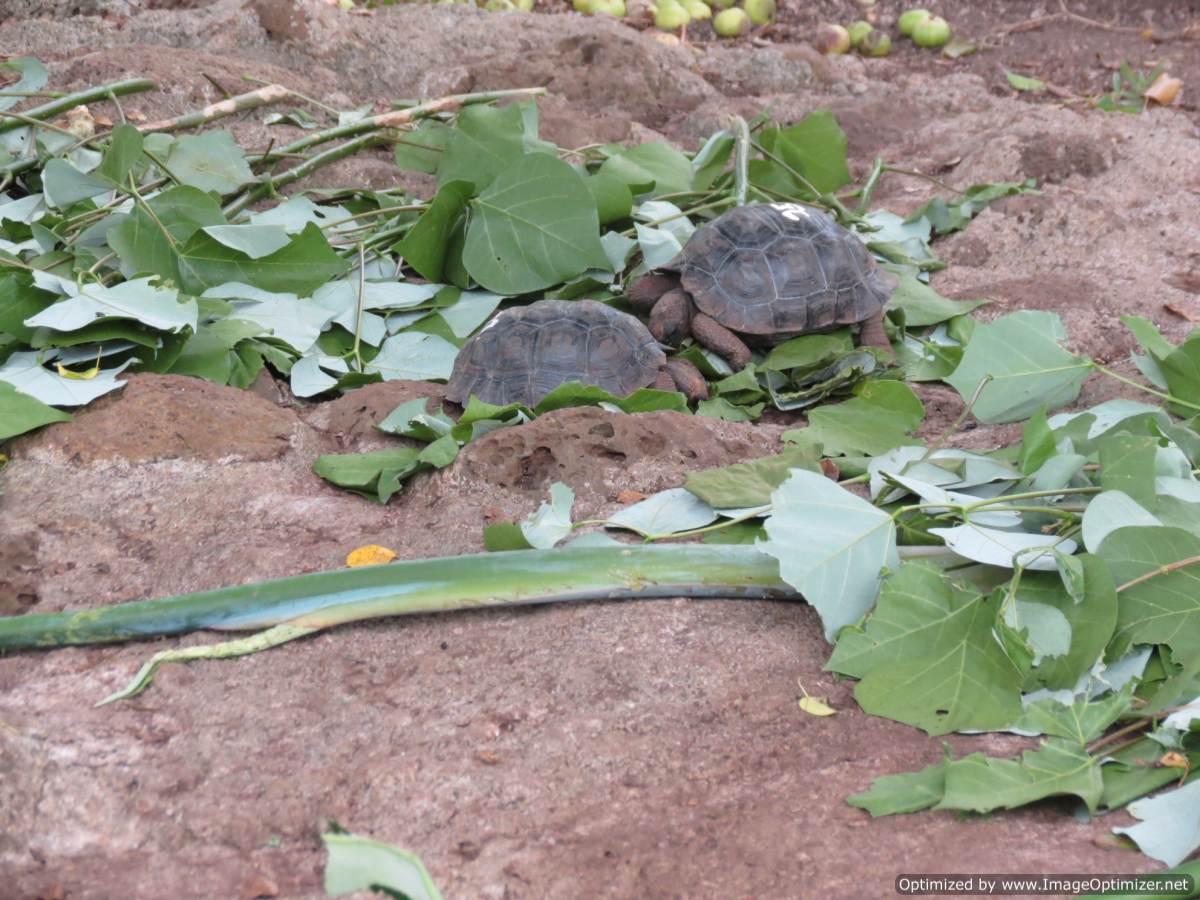 Few centuries ago, there were thousands of giant tortoises endemic to the Galapagos islands. But, sailors who sailed past these islands, captured these tortoises for meat because they could survive with minimal food and water for years. Sadly, nobody knows how many tortoises were killed by sailors for food. Scientists estimate that thousands have been killed. These giant tortoises have now been declared as endangered species and being bred in captivity. The giant tortoises live for 150-200 years and wear more than 200 kgs! In the breeding center, we also saw many small tortoises and how they were being provided food and the correct temperature for survival. After this visit, there was some time for shopping. J There are few cafés and restaurants that offer free wi-fi in this town.

That noon, we had some beach time. The sea was extremely rough and not many people swam. My husband did and had a great time being thrown around mercilessly by the sea. 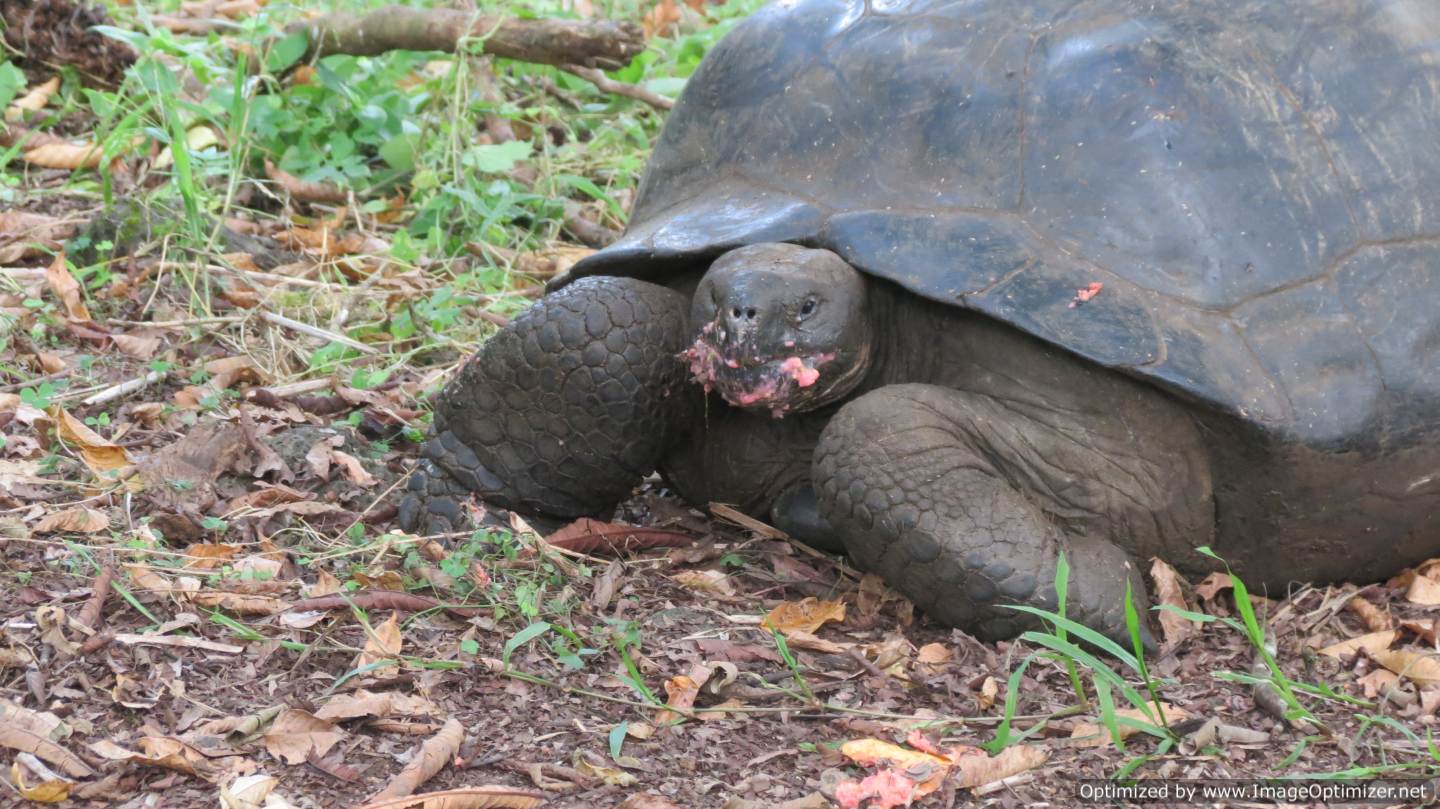 In the morning, we visited Los Gemelos in Santa Cruz island and the “Tortuga Crossing” ecological reserve. In this trip, we saw giant tortoises in their own natural habitat. We saw them munching on sweet pink guavas. They were so cute with guava smeared on their face! Also, there were few shells of dead tortoises at this reserve. I could easily fit into them!! During the walk in the ecological reserve, we also saw two huge sink holes. 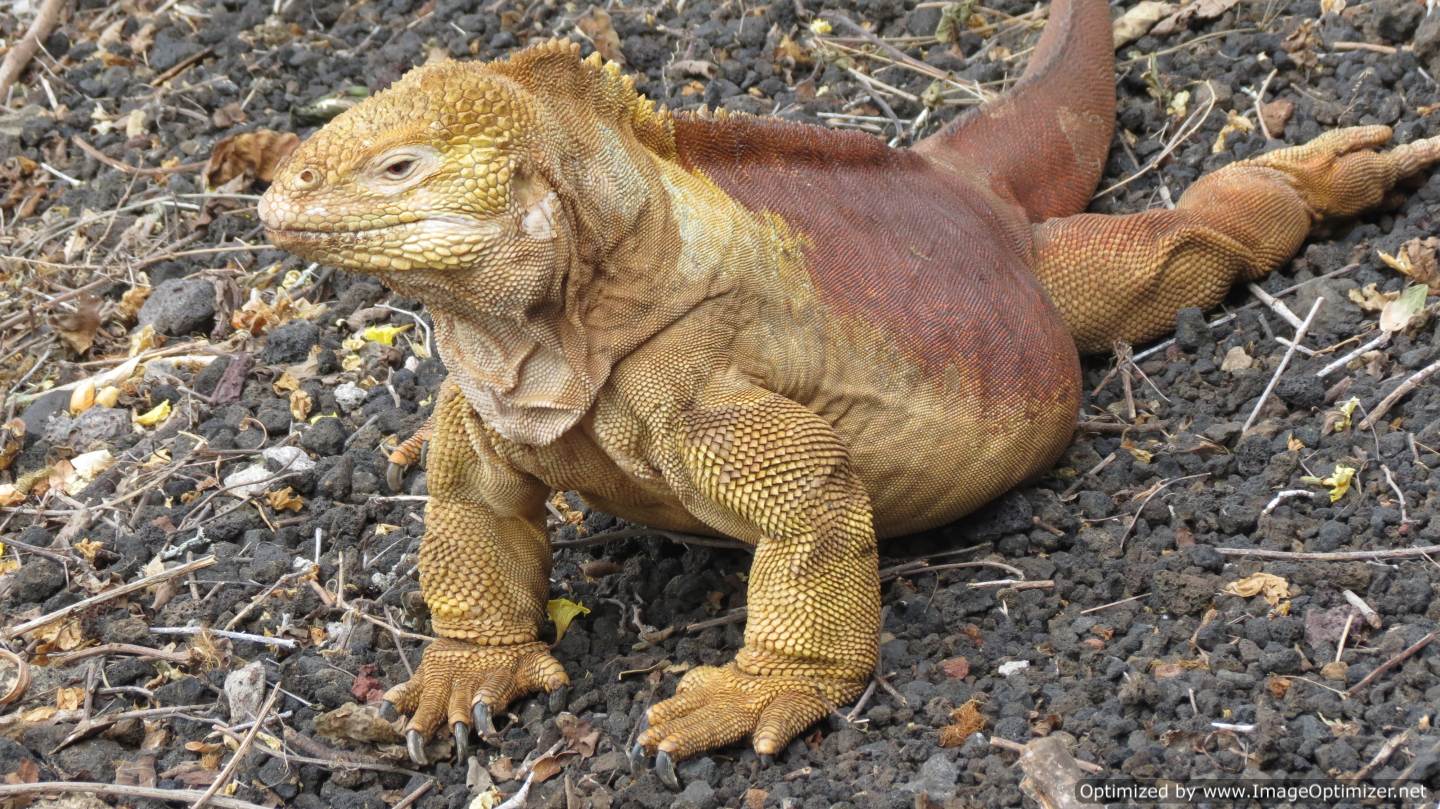 In the afternoon, we visited the Charles Darwin research station and the town of Puerto Ayora in Santa Cruz island. In the research station, we saw giant tortoises bred in captivity (please do read about Lonesome George). We also saw land iguanas which have been declared an endangered species. They have become extremely rare and hard to find on the islands because poachers kill them for their skin.

Another unique thing we saw at the research station was two giant tortoises mating. Nature is amazing in its design! After this visit, we shopped for a while at Puerto Ayora. There are few restaurants that offer free wi fi in this town and there is also an ATM. 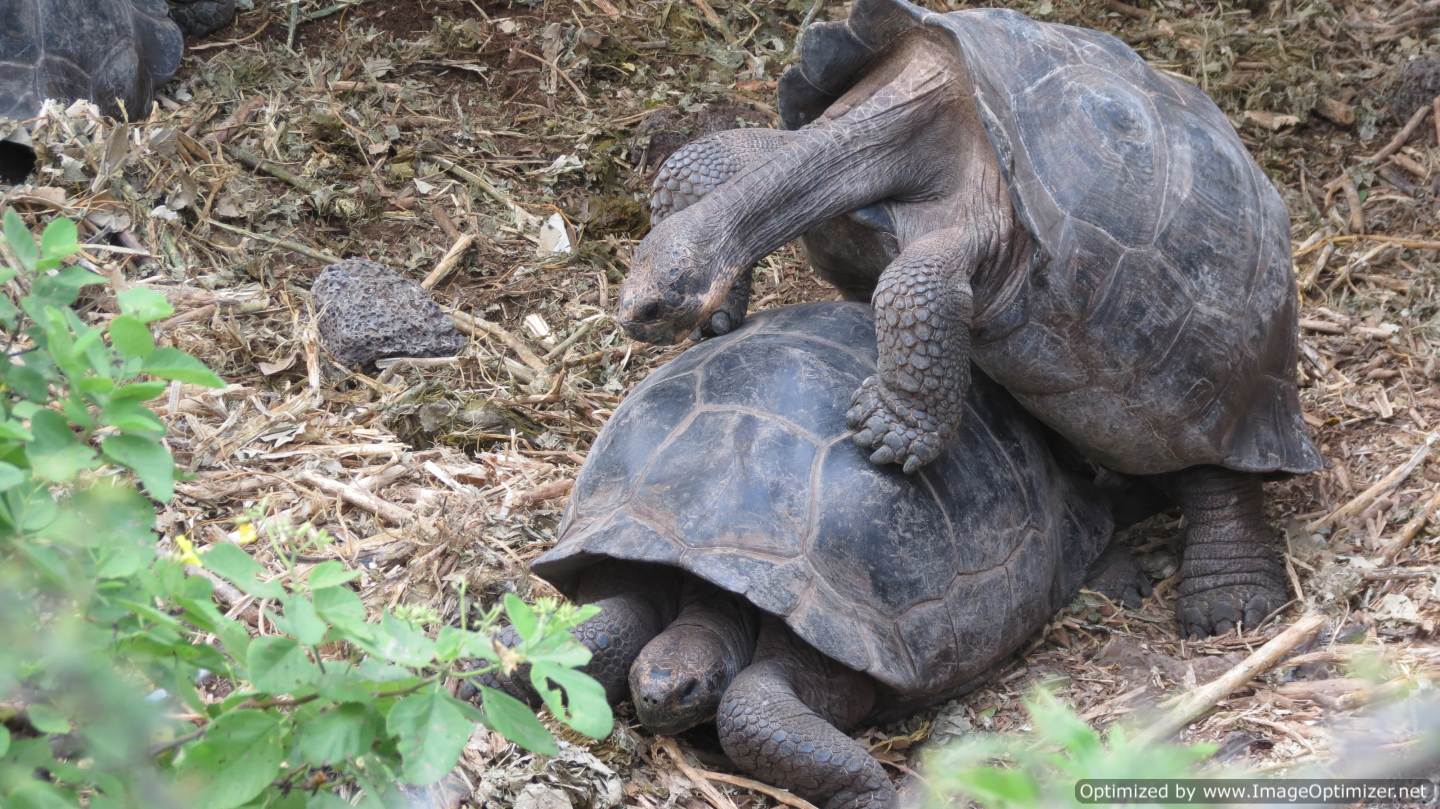 Giant tortoises mating – they put on quite a show :)

Before dinner, there was a nice toast for a safe trip back home and a nice slideshow of photographs captured by the crew over the years.

After breakfast, we were dropped off at the airport at Baltra. We flew to Guayaquil and back home. It was fantastic trip. We visited 24 points in 10 islands and traveled 534.5 nautical miles. We crossed the equator twice. One night while relaxing in the deck, we saw a shooting star. It was a memorable experience. I will always remember the forget-me-not blue waters, the adorable sea lions, the smug iguanas, the cute giant tortoises, the lovely blue footed boobies and the beautiful penguins! I think my wish to visit Narnia came true with this trip :) 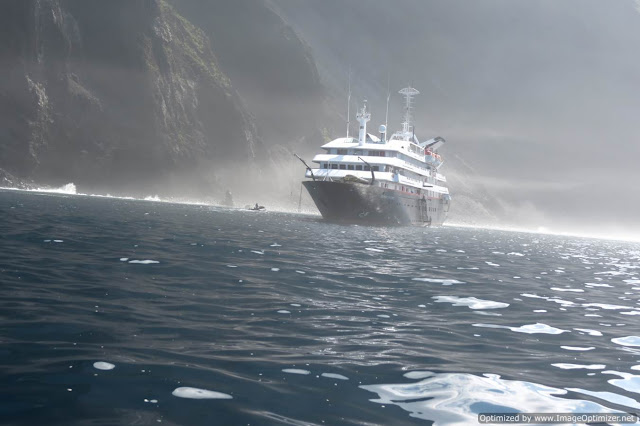 I am one among the many still pondering about life - what? why? how? when? I love Computer Science, Classical Music, Sanskrit literature, Non Profit,Software Engineer, Good Fooood , Travel, Fantasy, Fiction, Movies, Art and Craft, Philosophy, Hiking , more to come as my soul searching sojourn continues ... Well, that sums me up! :-) I blog at - http://pavithraks.blogspot.com and http://societyunderconstruction.blogspot.com Follow me @pavithrasrinath

Badrinath is at a height of 11,204 feet above msl. It is around 530 Kms from Delhi and the route is Delhi – Haridwar – Rishikesh -Devprayag-Rudraprayag – Karanprayag-Chamoli -Joshimath – Badrinath. Badrinath route opens in first week of May and is closed for winters after Deepawali.
If going by own vehicle, one has to reach upto Karanprayag or Nandprayag and take a night’s halt. If there are two drivers, one can easily reach upto Joshimathh and stay there, saving one day.
For train journey, the last station is Rishikesh, from where hired taxis, chartered buses, route buses and jeeps are easily available for Badri Nath.