Called up the room service for tea and then rang the reception to figure out the progress on the permit thingie.  We were told to call up after 1030 to find out more about the permit.  Now with more than 3 hours to kill before we could find out more info about the plans for the day, we all took it easy… never realised that the sinking feeling in the pit of the stomach was a sure sign of disappointment for me.

Rested and relaxed, we were raring to ride… we all got ready and at 1030 Hours, we called up the reception again… this time, we were told we would know about it by 1130. The manager had gone to the DC’s office for the permits.

Permits are necessary to be able to travel in areas beyond Leh.  This is so because this is deemed as Inner Line Area and the military rules here… the Police just act like sentries with no powers.  And common sense says that you do not screw around when it comes to the Army.  They take their work very seriously and if they do not see a permit on you, well you cannot go ahead.  PERIOD!

They are issued by the DC’s office in the J&K Tourism Complex, and you can get them on your own as well, but asking the hotel to arrange eases things for you… they do charge you for it, but on the whole, it saves a lot of time and headache.  So all people aspiring to travel on this route, be prepared to either wrack your head or shell out 75 bucks per head and get it done painlessly.

Well, soon the time came and we met the manager downstairs… he had some not so good news… the DC’s office was closed due to the Hemis Festival that day, and the DC was making his presence felt there.  We thought we would go see the Monastery and generally be touristy… but laziness and the punishment of the previous day was enough for us to drop any plns of extensive riding… sitting idle in the hotel was also not an option hence we figured we might as well see what is around Leh.

Headed up to the room to gather the keys and the helmets… and disaster struck… I could not find the keys for BB… Searched high and low and everywhere… even at the reception where I might have dropped it by mistake, even in the hotel we had checked out prior to settling in here… No luck.  stranded with the steering handle locked, the ignition in the off position… BB was just like a hunk of metal… distraught and depressed, I decided to ride Sushil’s Puny Fiero and he would ride Pillion with Santosh in our touristy endeavor.  with the riding pair decided, we kick started our rides and went off to Shanti Stupa. 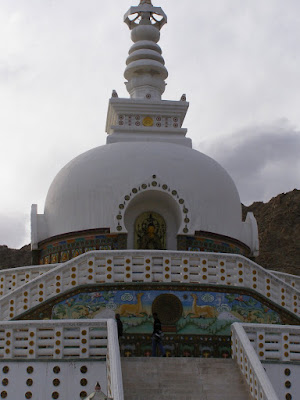 The place had some amazing views to offer of the Town below and the mountains surrounding Leh. 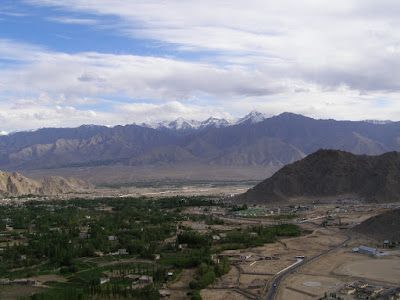 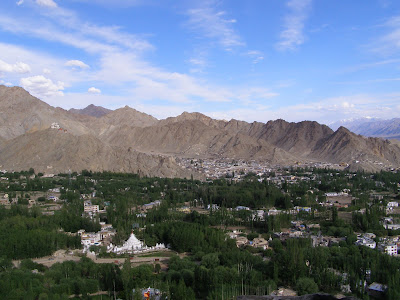 Post a brief halt at the Stupa, we decided to head down into town and do some shopping… looked at some t-shirts and local curios but nothing appealed… and we ended up in a small eatery called Leh Cafe… This was bang opposite our hotel which was a plus coz walking too much was making us breathless… Acclimatization… the key word while travelling to Leh and any such destination which is high up in the mountains.

After gorging up on some sandwiches made with the local ladakhi bread, which is dry and hard, we decided to have a look at the Leh Palace under the lights… we ventured up and found that the lights had not been switched on… depressing and disappointing… but did manage to click some night shots of the Leh Town below… 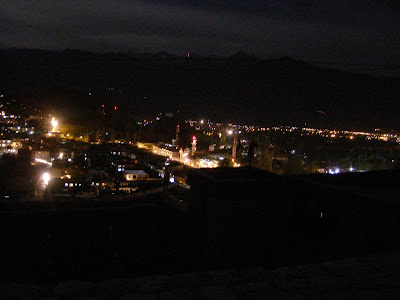 Leh as seen from the Leh Palace 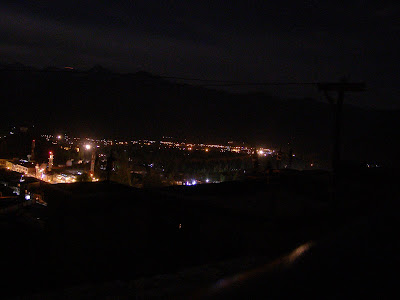 Another shot of the town below

After this not so fulfilling bit, we returned to the hotel and decided to crash for the night… with hopes that the elusive permit would make an appearance tomorrow and we would be able to realize a long overdue dream.

Woke up in the morning and decided to do something with BB… but waited for a confirmation from the Hotel regarding the Permit.  Finally recieved word from the reception that the permit has been procured, we snapped the steering lock and disconnect the ignition switch of the bike to be able to ride it :-)

We started riding and pretty soon we ended up at the South Polu, which is the check post when approaching Khardung La from Leh.  deposited the permit with the sentry and started riding ahead.

The road from Leh to South Polu was newly laid and smooth to ride on… post the check post, all hell broke loose… the surface changed its nature to gravelly and rocky with some water crossings.

Enroute, we decided to click snaps to cherish the memories of a Ride, which usually is once in a lifetime affair… 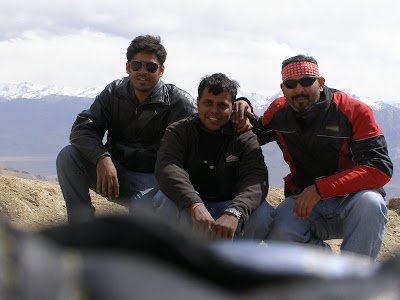 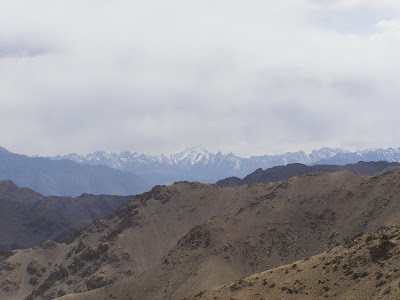 The 14 km stretch from South Polu to Khardung La was hell but easy compared to the terrain we had covered to reach Leh… hence the going was pretty sure footed and quick.  Finally, hit the final bend and we were home… WE FULFILLED OUR DREAM!!!!!!!! We were at Khardung La 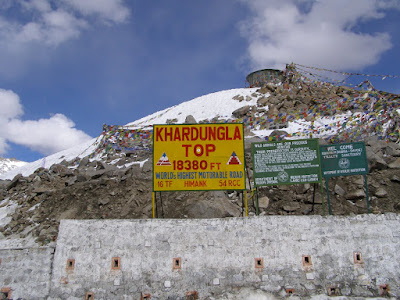 The highest Motorable Mountain Pass in the World @ 18380 Ft 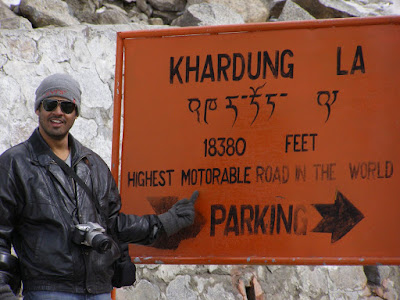 Sushil, posing in front of the Parking sign @ K-Top 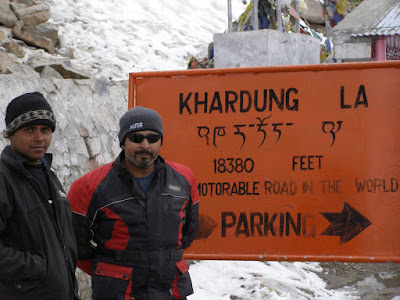 Yours Truly and Santosh @ K-Top

Clicked some more snaps of the views from here and this is how it looked: 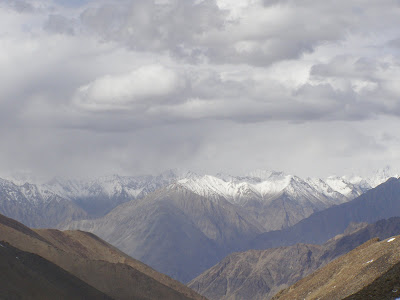 My Salute to these brave men 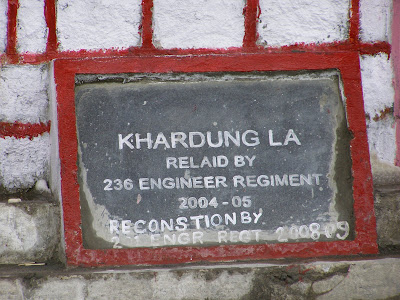 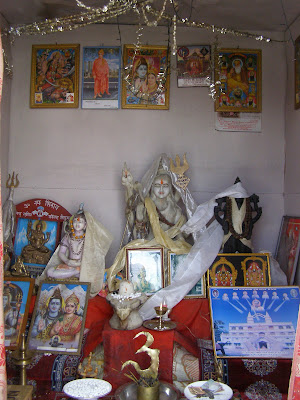 Temple @ Khardung La - This a common fixture on all Mountain Passes 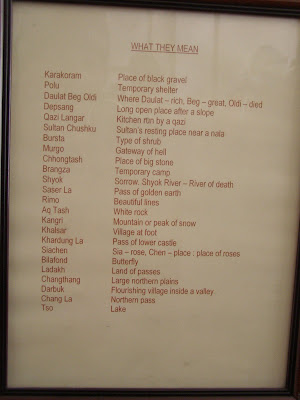 There was a souvenir hut which was selling the usual assortment of T-Shirts, mugs, plaques and plates… I picked up a fridge magnet which proclaims that I was there at Khardung La… for memory sake and had a cup of tea in the canteen with one of the brave soldiers who man this place.

Decided to haul ass from Khardung La as it was close to 4 in the evening and the wind had picked up in speed and the chill factor… while riding back, we saw an amazing sight… 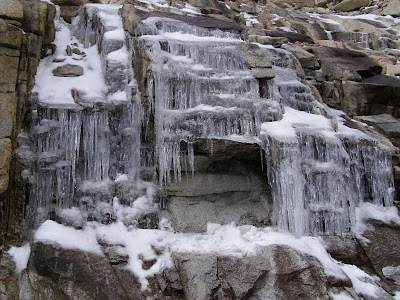 This wasn't there when we rode up :-)

Seeing this, we realized how inhospitable this place and Mother Nature could be at these altitudes… we picked up the pace, albiet only by a couple of kilometers and headed down towards the more tolerable climes of Leh. 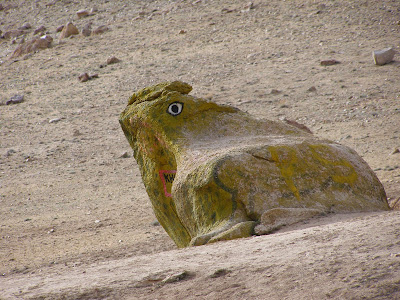 A dream has been fulfilled and what was left was the disappointing and depressing task of getting back home… this was the difficult part… the bikes had taken a beating, leaking oil and one bike just plainly refused to pull anymore… Not wanting to split up and ride seperately, we decided to load up the bikes in a truck for Manali and we would take the night bus to Manali… How difficult would this be when we have a cushioned seat under us and place to sleep if we felt like… How wrong I was…

With the bikes loaded up, all we had to do was show up at the bus stand at 0100 Hrs to catch the bus for Manali.

This was accomplished and we ended up having the journey, which has put me off Tempo Travellers for the rest of my life.  I refuse to travel that way… I am ready to take the beatings on the potholed road, no road and slush and mud and dust and dirt but I am not travelling in that bus again!

The ride was scary… the windshield and all the windows fogged up and the mist froze, reducing visibility to almost zero, as we were nearing Tanglang La, the driver leaning out of the window to see where he was going, the bus reeking of diesel fumes emanating from the fuel can stowed in the bus, uncomfortable seats, a screwed up road throwing us around like rag dolls, tiredness and lack of sleep due to the bouncy ride… but did manage to click some good shots on the way :-) 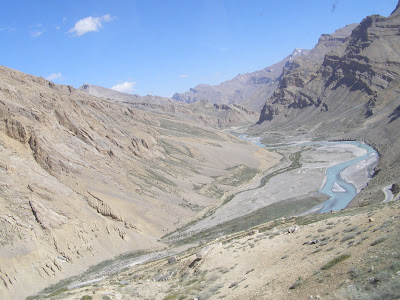 Enroute leh to Manali - clicked from a moving bus 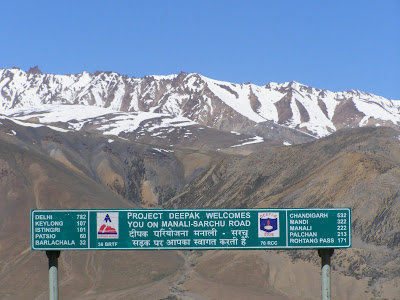 Near the state border of Himachal Pradesh & Jammu and Kashmir 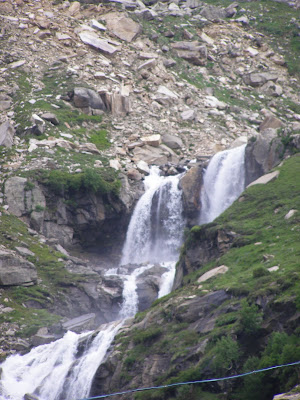 Got down near the Vasisth turnpike and found a decent hotel to crash and wait for the bikes to show up… which came in a day later… the ride back from Manali was boring with a night halt in Zirakpur and managed to reach Delhi by 5 in the evening the next day.

More snaps can be seen at

A dream fulfilled! was last modified: November 20th, 2019 by bikerdude

An adventure tourism & hospitality professional, an avid motorcycle tourer, with a dream of visiting the entire country on two wheels... Writes from the heart and quotes from the hip...

Besides my near perennial disease of writer’s block, I am also low on time which is holding me back from writing long boring essays…